The Domaine de Marie (English: Dominion of Mary, Vietnamese: Mai Anh) is a Catholic convent in Dalat City, Vietnam. It is a part of The Roman Catholic Diocese of Dalat and contains a nunnery which operates schooling for local children.

It is also known as the Cherry Church as it was formerly surrounded by cherry trees and home to 50 Roman Catholic nuns of the Mission of Charity. The complex consists of the main church and two convents. Built from 1930 to 1943, the facade is designed as an isosceles triangle with small arched windows and a central rose-shaped window, typical of the 17th century French style. The Vietnamese arrangement of this church makes it different with the roof taking its design from the stilt houses of the central highland ethnic minorities. Today the nuns support themselves by making handicrafts and selling the fruits grown in their orchard.

This church is designed with no bell towers and other features different from the originally designed churches in the West. The façade of the building is designed as an isosceles triangle with many small arch-shaped windows, and a cross on the top. Right at the center of the façade is a grand rose-shaped window, a detail which usually appeared in the architecture of French church at the end of the 17th century. The walls are decorated with the Normandy style which allows manipulation of lights: dark, solid-hollow and etc. The most unique of this church is that its roofs are similar to the roofs of the communal houses of Ethnis minority in Central highland. Although the church was constructed by French, Vietnamese dedicated their own features to the design of the building. Behind the church we can see three blocks of modern architectural houses of Les filles de la Charite de Saint Vincent (the Daughters of Charity of Saint Vincent). 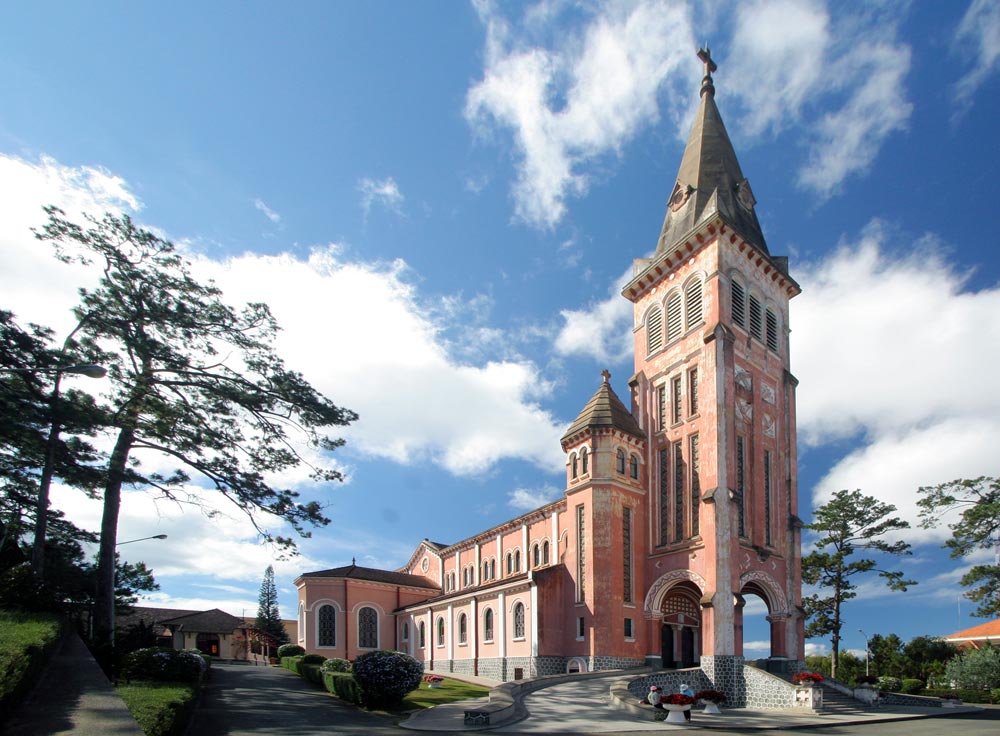 A symbol of Vietnam-France relationship maybe the 3m statue of Mary created by a French architect in 1943 but resembles the image of a Vietnamese woman. The statue was a gift from the Indochina governor's wife, who used to worship at the church and decided to donate the statue as a contribution to the renovation of the building. An interesting fact is that after her death, she was buried behind the church according to her will.

If you are a person who likes spiritual tourism and love to find out about Vietnam-France relationship, make sure you check out the beautiful and peaceful Domaine de Marie Church in Dalat.