Laos, officially known as Laos People Democratic Republic, is one of the most beautiful countries in South East Asia. The mountainous country borders with Vietnam to the East, Cambodia to the South, Thailand to the West, China and Myanmar to the North.

You can go to Laos for a vacation all year-round; however, there is the best time to visit Laos for having a remarkable trip to this wild and rustic country.

Like almost every other South East Asia country, Laos has a tropical climate with two distinct seasons: the dry season and the wet season. The country is warm year-round but it can get down to freezing temperatures in some mountainous areas in the winter.

The wet season in Laos runs from May to October. The higher you are the more rainfall you will get. Towns along the Mekong river and Vientiane get the least rain. The most obvious consequence of the wet season is infrastructure damage. The roads will become slippery and muddy. With rainfall, rivers can be dangerous sometimes and can destroy bridges, roads, etc. So do not be surprised if your trip takes longer than expected. 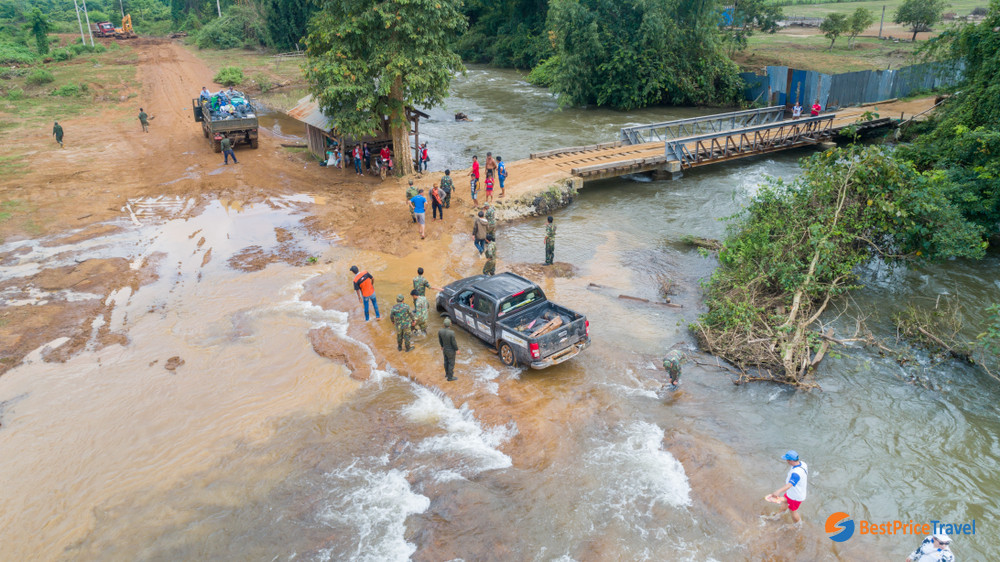 Traveling in the wet season can be a little tricky

On the other hand, during the wet season, boat transfer becomes available and easier to access. Rivers are so high that slow boats can move with ease. Along the Mekong River, there are many speedboats. But there is something you should consider taking a speedboat trip. During the wet season, rivers can be very messy with objects which were brought to the river by the water stream of heavy rainfall. Hitting an object at 35mph can be very ugly. However, the temperature is lower, the air is cleaner during the wet season. Traveling this time can still be interesting.

From March to May, Laos farmers set the rice fields and forest on fire to improve soil quality and prepare for the new rice crop. The result is most of Laos is covered by smoke. The temperature is very high which can rise above 40oC, the whole country is covered by smoke and dust. This is not the best time to go. 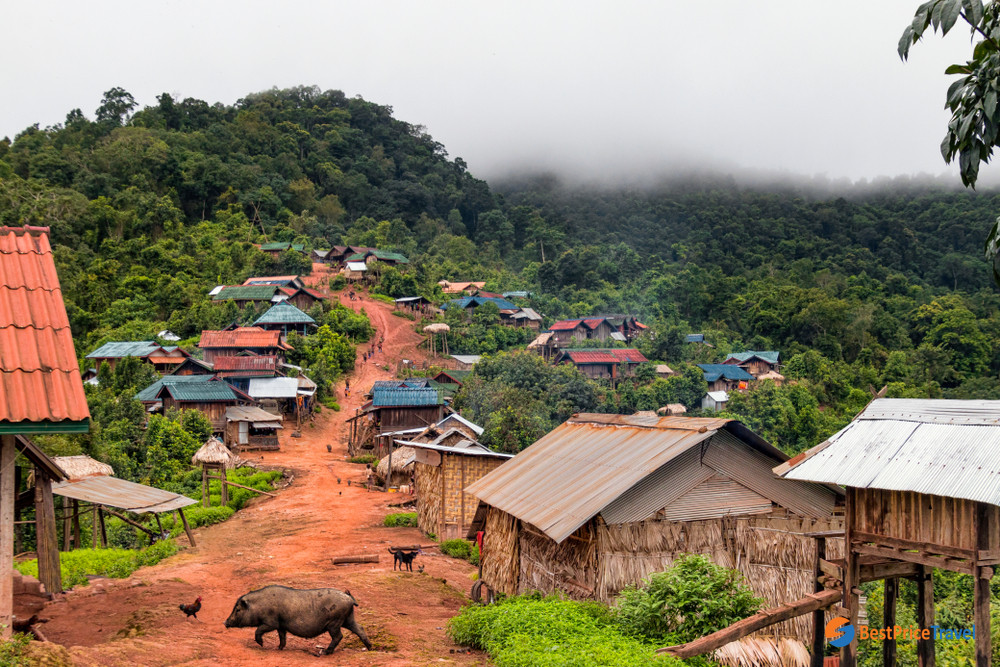 The cool dry season is completely opposite to the hot dry. This is a great chance to visit Laos without worrying about the weather. Temperatures are relatively low, the air is fresher. Especially in November and December, the water levels in rivers are high enough to take a boat trip. But this is the peak tourist season in Laos.

Besides the weather, festivals are also a big deal to consider when visiting a country or territory. With festivals and public holidays, you will have a great opportunity to learn about local culture.

Boun Pi Mai is considered as Laos New Year. This is the biggest national holiday of Laos which takes place annually every mid-April. The celebration lasts for 3 days but it is often taken place for about a week. Like Songkran of Thailand, during Boun Pi Mai, there will be many parades, dancing, singing, etc. People pouring water and flowers onto Buddha temple, as well as friends and relatives to wish them good luck in the new year. Boun Pi Mai takes place during the driest and hottest month of the year, you can see the exciting water fights everywhere. So unless you want to get wet, avoid walking on the streets these days. 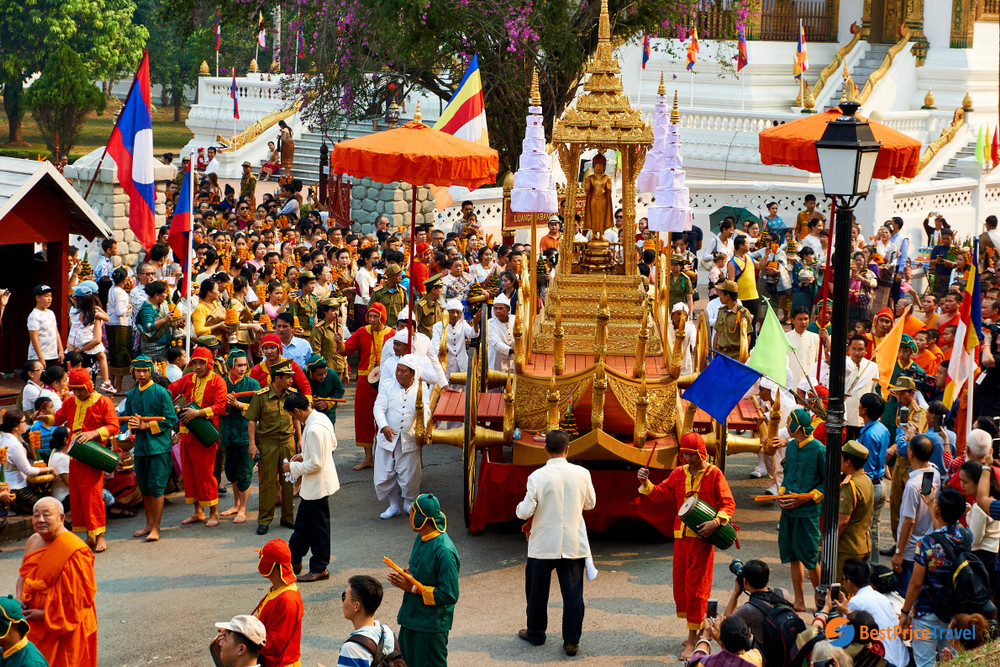 The Rocket festival takes place on different weekends in different villages, but usually in late May. This is the dry season in Laos, people use the Rocket festival as a “rain caller”. They go to the suburban areas to launch their homemade rockets. There are also many contests for the rockets. Get yourself a motorbike, go to the countryside and enjoy the festival. But remember to prepare for the lack of concern for health and safety. Drunk driving is a serious problem here, so watch out.

This is the national boat racing festival in Laos. The festival takes place from November 15th in the Lunar calendar. The race is held on November 16th starting in the early morning. Over 20 teams with dragon boats line up for the race on the Mekong river. People come from all around Laos to take part in this significant festival. There are three categories: Sport for men, Traditional for men and Traditional for women. The race and prizes are live broadcast on the national TV of Laos. Street these days are shut down for vendors and booths, so be prepared for the sea of people.

Xayaboury is the Elephant festival. Located in the west of Laos, Xayabury is the home of hill tribes, wild animals, and of course, elephants. This festival takes place every year in February or March and usually lasts for two or three days. It draws people from all over the world to celebrate and observe over 100 elephants with their trainers demonstrating working techniques and many interesting things. The celebration is filled with elephant-related activities. Tourists are welcomed to film documentaries. 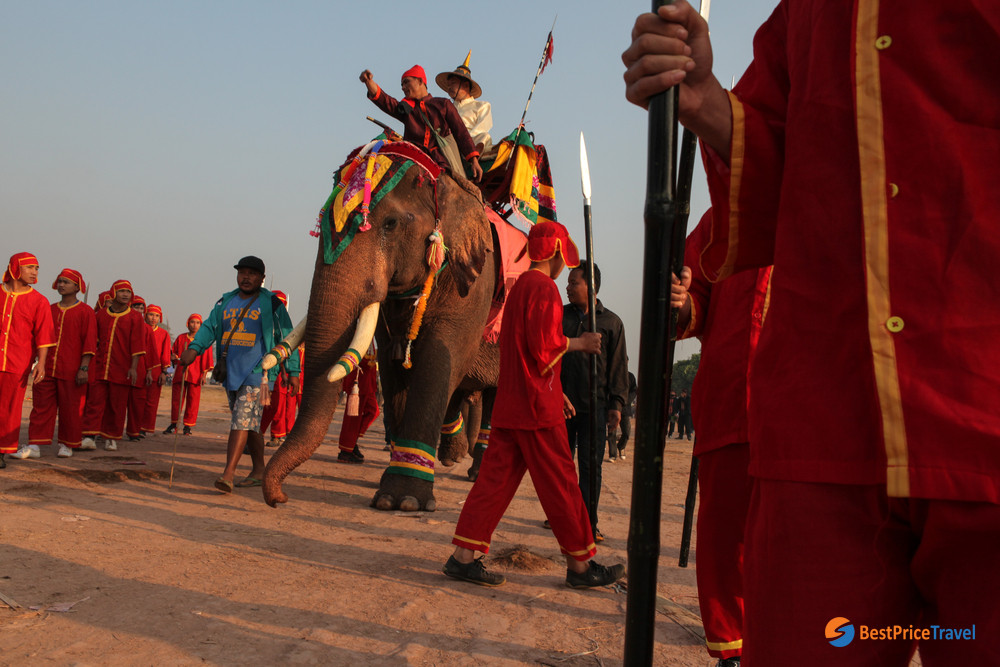 Hundreds of elephants will take part in the festival

With all the information given about the weather, festivals and public holidays of Laos, maybe you already have an idea for yourself. Laos is a beautiful country with many unexplored things. So do not hesitate to book a Laos tour and pay a visit to this magnificent land of South East Asia.

Read more Useful Information For A Trip to Laos