Vientiane: The Laid-back Capital of Laos

Vientiane, the capital of Laos, is probably one of the world’s smallest capital cities. And this city indeed feels like a small town, with a deliciously relaxing atmosphere that is so different from other bustling, crazy cities in other Southeast Asia countries.

Situated on a plain that forms the border with Thailand and follows the peaceful rhythm of the Mekong River, Vientiane, the laid-back capital of Laos, must be the first destination where you can enjoy a tranquil vacation and a bulk of stunning attractions. Vientiane is a wonderland of Buddhist cultures, French colonial architecture, café society and the slow-paced flow of life. Also, Vientiane plays a significant role in economy, politics and culture in the development of the Land of a Million Elephants. 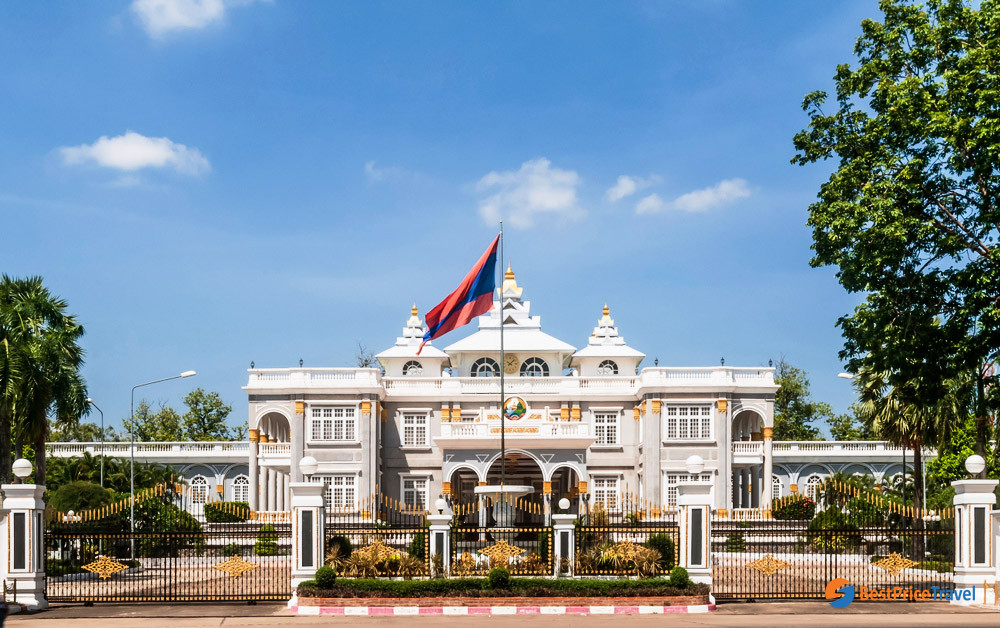 The Presidental Palace in the central of Vientiane

First settled around the 9th century, Vientiane formed on a curve of the Mekong River surrounded by fertile silty plains. Being an important administrative city during various times, Vientiane officially became the capital of the Lao kingdom in the mid-16th century after moving from its previous location at Luang Prabang.

The height of Vientiane’s achievement was probably a few years later when it started to become a prominent center of Buddhist learning. However, Vientiane soon came under invaded control by the Burmese, Siamese, Vietnamese, Khmers; more recently, the Japanese and the French. Under the French colonization, not only did economic growth increase considerably but also the vital reconstruction began to lay out Vientiane with a scattering of colonial style mansions and emerging administrative buildings. 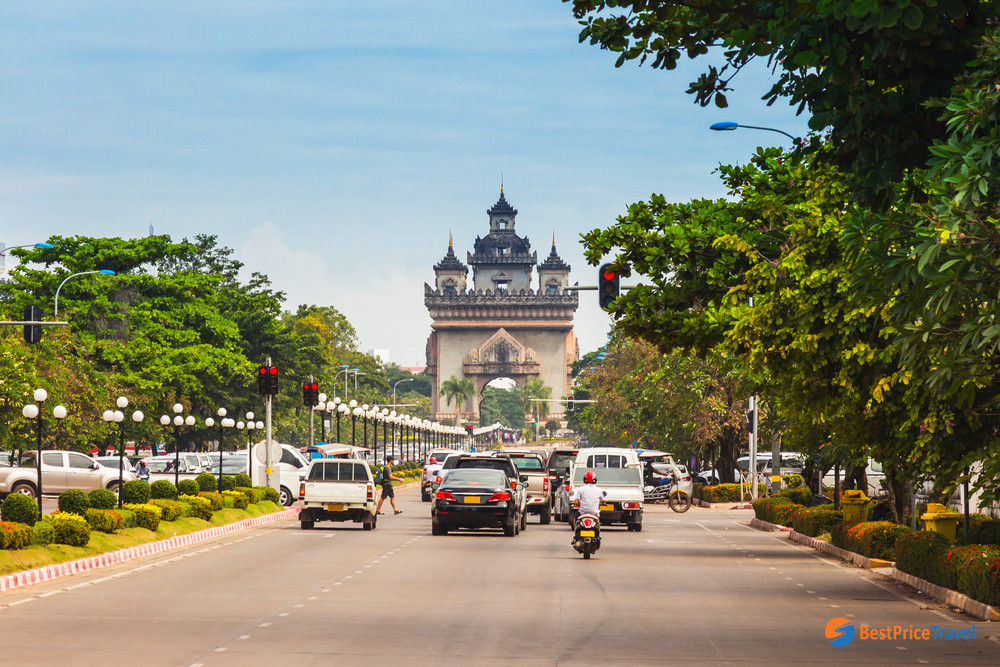 After enduring centuries of fighting for freedom, Laos regained independence under a communist government in 1975. Picked up in the 1990s and recent years, Vientiane has seen an enormous explosion of construction, road redevelopment and vehicular traffic around the city.

Vientiane is a dominant community of Lao Loum people belonging to the Lao upper class. They have a well-defined social structure and speak native language of Laos and other different foreign languages mostly including English, French and Vietnamese. Theravada Buddhism takes up the predominant religion of Vientiane while there is a minor group following non-Buddhist local religion. Apart from Lao people, the populations consist of smaller groups of Chinese, Vietnamese and Indians.

As the most dynamic urban life of Laos, Vientiane is home to numerous symbolic Buddhist sites, plentiful high quality restaurants, bars, city hotels and other recreational and entertainment centrals. Simultaneously, Vientiane comprises villages and farmlands, where the local develops its handicrafts, textiles and the most spectacular silk workmanship. 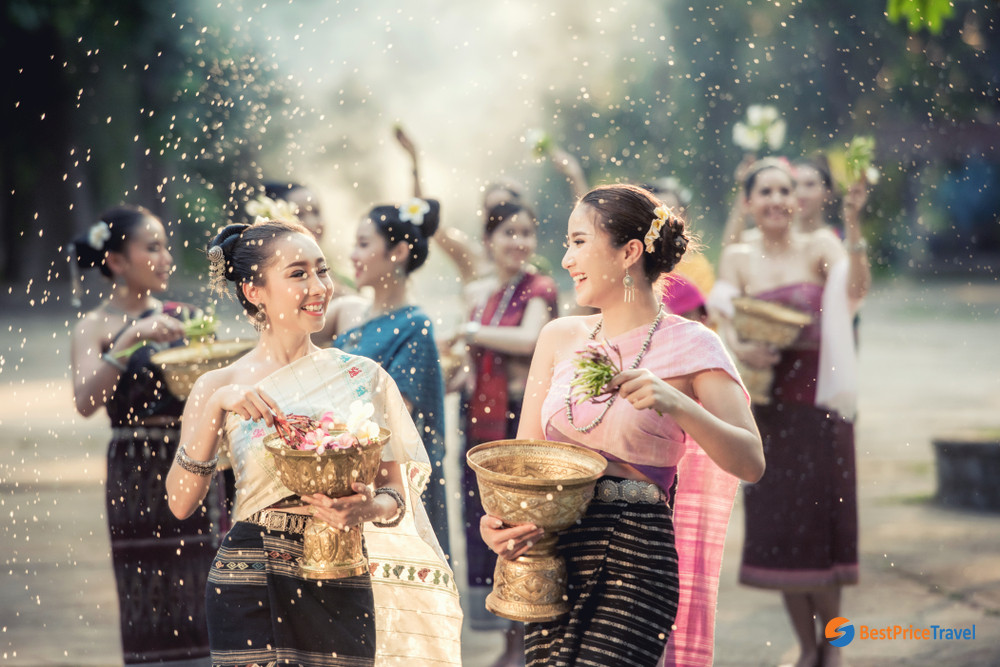 One of the most striking festivals in Vientiane is Lao New Year, also called Pi Mai or Songkran, which is celebrated from April 14 to 16. Usually lasting a full week, tourists can enjoy a host of ceremonies, traditional music and dance round out the festivities, especially the huge water fights. In addition, the Rocket Festival (from the end of April to mid-May) to ask sky gods for rain, the Boun Khao Phansa (the July full moon) to start Buddhist Lent and the Boun Ock Phansa (in October) to celebrate boat racing give tourists multitude choices to visit this captivate Buddhist land.

In contrast, the dry season, which runs from November to May, reaches more pleasant temperatures and less sticky air. The peak season of tourism is around November and next February, because the time from Mar to May is boiling season and should be avoided to visit.

The fastest and most convenient way is taking a flight to The Wattay International Airport, 3.5 kilometers west of the city, via wide range of international and local airlines. You can choose between Air Asia, Bangkok Airways, China Eastern Airlines, Lao Airlines, Thai Airways International or Vietnam Airlines which depart from main cities in Asia.

There is only one station from Nong Khai, Thailand to Lao and going to depart from China by 2020. It is affordable to book train ticket through agency with the cost of around 200 baht including transport from guesthouse to the border and even the way to the Nong Khai station.

Traveling by bus can take a longer time than advertised, but buses have three stations (the Central, the Northern and the Southern) with some English-speaking staff, plus food and drink stands in compensation.

How to get around Luang Prabang

The cheapest and most recommended way to get around Vientiane is cycling. Taxi and motorbike also grow popularly for renting or touring around to contemplate the city. Another significant way is taking jumbo or tuk-tuk on journeys varying from 500m to 20km in distance. Depend on purposes of your trip, you can choose one of three types of tuk-tuk including tourist tuk-tuks, wandering tuk-tuks and fixed-route share jumbos. 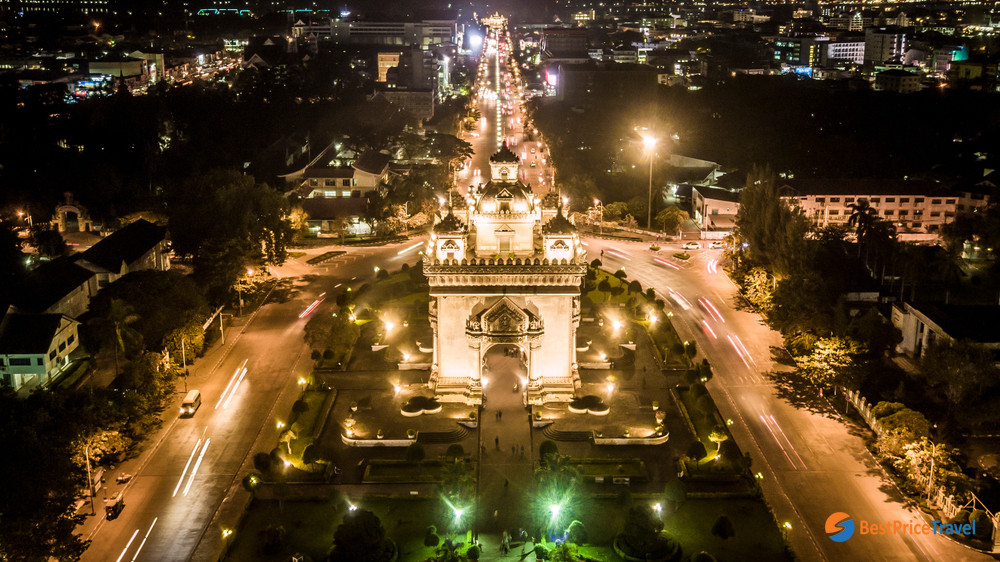 The night streets in Vientiane

The AC electricity is 230V with the power outlets of two-prong round or flat sockets. If you come from North America or Europe, the power adaptor will accommodate both kinds of plugs. It should be highly recommended to bring a universal travel adaptor to avoid the hassle of buying new adapters for everywhere.

A plenty of international hospitals providing modern and fresh medical facilities scatter around the city of Vientiane. However, most of Vientiane’s hospitals and medical centers offer basic treatments and not too serious emergencies. You should notice some cases of exception such as Australian Embassy Clinic only for nationals of Australia, Britain, Canada, Papua New Guinea and New Zealand or Centre Médical de L'Ambassade de France opening to all but visiting outside regular hours by appointment only.

Known as one of the most secured Southeast Asian cities, Vientiane has a low crime rate according to international standards. However, visitors should be careful when going out at midnight or wandering around the BCEL Bank on the riverfront. Also there are frequent pickpocketing or busy roads during festivals. You should list several essential numbers of ambulance (1195), fire (1190), police (1191) and tourist police (021-251128) to contact in emergency.

The Lao currency is the kip (K) with nominal values varying from 500 to 100,000 kip. Changing money should be best done by licensed money-changing booths at a bank or at the airport. The two most reliable banks for currency exchange are BCEL and BFL, which offer good rates and extended opening hours.

It’s also able to exchange money at shops, hotels or markets for no commission but at good rates. US dollars and Thai baht are widely accepted in busy tourist areas while only large hotels, shop and restaurants accept credit cards.  Here are some recommended money changers you can rely on: Sihome currency exchange, CK money changer, SDV Money Exchange and Vienghai money exchange shop. In case you don’t have enough kips, find out information about these places and call first before visiting.

Top places to visit in Vientiane