Pha That Luang, also known as the Great Golden Stupa, is considered the most significant national symbol and sacred monument of Buddhism and Laos sovereignty.

Located in the outskirts of Vientiane city, the first impression about Pha That Luang must be the glorious splendour of this huge Buddhist Stupa covered in gold. The unique architecture and the ancient religious structure help the Great Stupa become a monument of national pride that every Indochina travellers shouldn’t miss.

An eye-witness of Lao history

Originally, the Great Stupa was built as a Hindu temple in the 1st century then was rebuilt as a Khmer temple in the 13th century. The current structure was constructed by the order of King Setthathirat in 1566 after relocating the capital from Luang Prabang to Vientiane.

As an eye-witness of Lao history, Pha That Luang had undergone several major reconstructions over the years due to the plunder of foreign invasion. Significantly, the Kingdom of Siam repeatedly caused severe damage to the Great Stupa from early 19th century to the year of 1940. However, it was not until the end of World War II that the Stupa was completely rebuilt by the design of a French architect.

One of the top architectural works of Buddhism

Becoming a symbol of Lao national pride, Pha That Luang has references to Lao culture and identity. The main stupa is designed in a pyramid shape which is approximately 69 meters long and 45 meters high. The Stupa is decorated with 500 kilos of gold leaf which makes the shining structure a stunningly precious look. Nevertheless, only the pinnacle is covered with real gold and the rest is in golden colour. 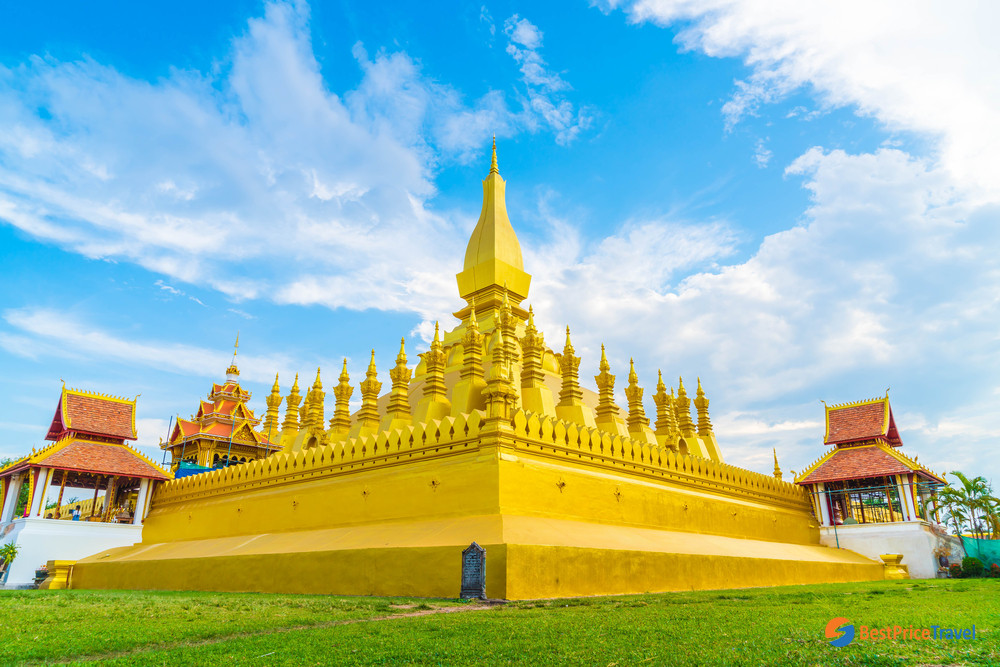 Based on Buddhist doctrine, Pha That Luang was built on three levels representing the ascent from the Earth to the Sky. The first level symbolizing the underworld has hundreds of sema stones. The second one has 30 small surrounding stupas which stand for 30 perfections of Buddhism. The last one is the prologue to the Kingdom of Heaven.

Visit the Pha That Luang complex

Previously, visitors are allowed to drive around the whole complex but now it is prohibited to keep traffic out. The visit around Pha That Luang is divided into 2 parts, the outer area and the interior of the stupa.

Surrounding the Great Stupa, there are large grounds consisting of gardens, temples, monuments and a Palace, where monks still live and study. It is worth taking a stroll through the cloister to contemplate the paintings, sculptures and statues of the Buddha. There are also numerous altars at the foot of Pha That Luang, where many people bring gifts and flowers to give respect to the Stupa. 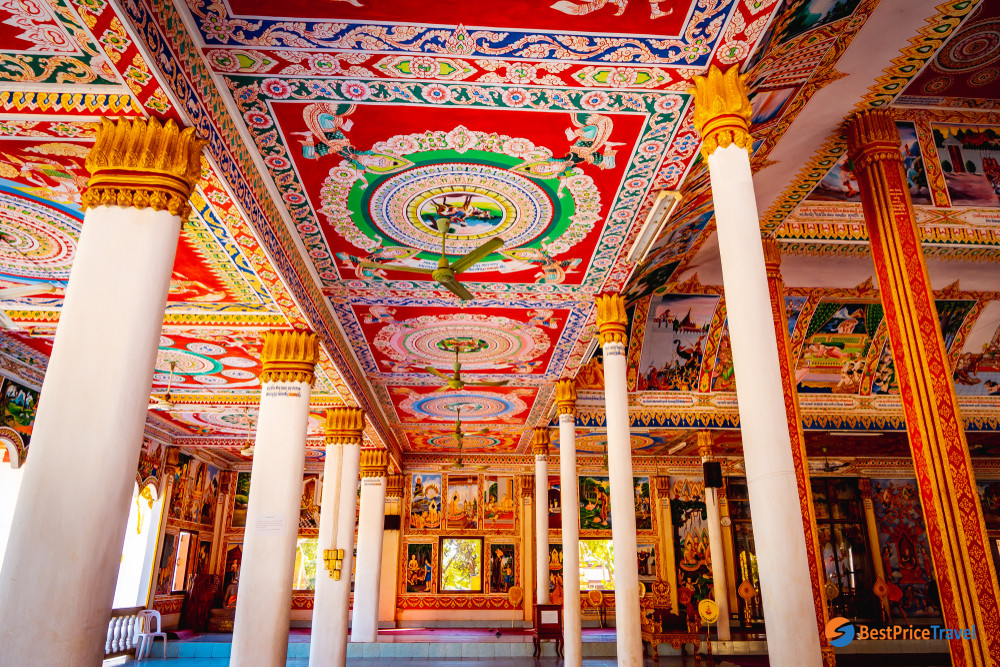 The vibrant decoration in the interior

Some striking places that visitors should never miss are the Statue of the Sethathirath King and Wat Neua That Luang. To honor the contributions to construct the Great Stupa, Laotians made a statue of the King standing in the Saysettha gardens on the way to main entrance to the stupa. Wat Neua That Luang is a complex of an impressive Thai-style Palace and a small Wat. 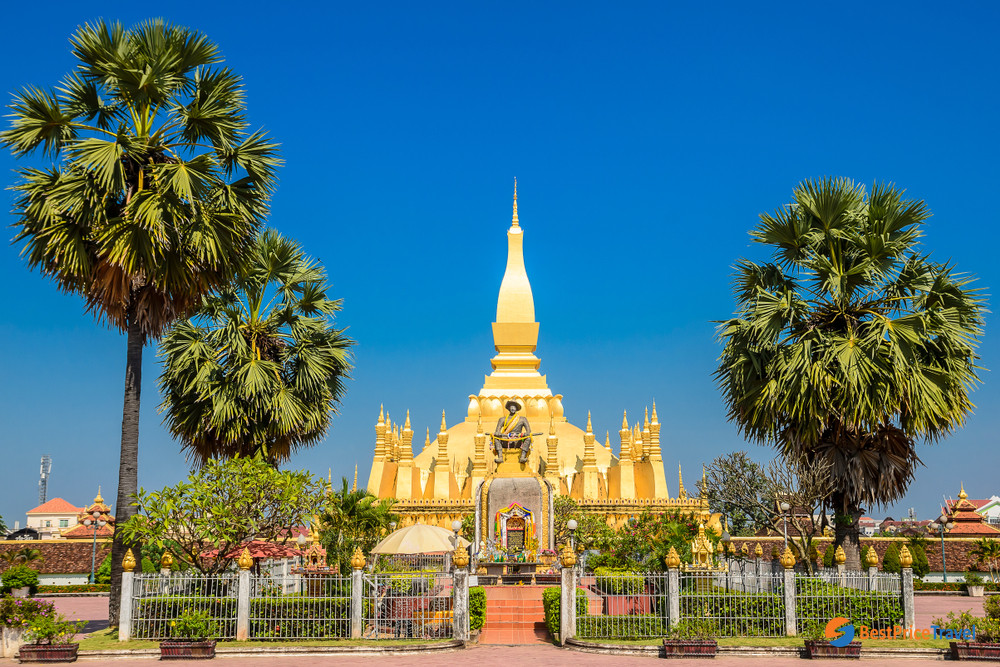 Statue of the King in the Saysettha garden

Travelers can visit the Golden Stupa every day of the week in hours from 8am to 12am and from 1pm to 4pm. The best time is in early morning when the weather is not really hot and it is not too crowded.

That Luang Festival is an annual event that visitors shouldn’t miss during the full moon of the 12th lunar month (around October and November). This is one of the most important Buddhist ceremonies and celebrations attracting thousands of people all over the world. Plenty of parades, traditional music show, carnival rides, religious ceremonies and fireworks were performed during 3 days and nights. 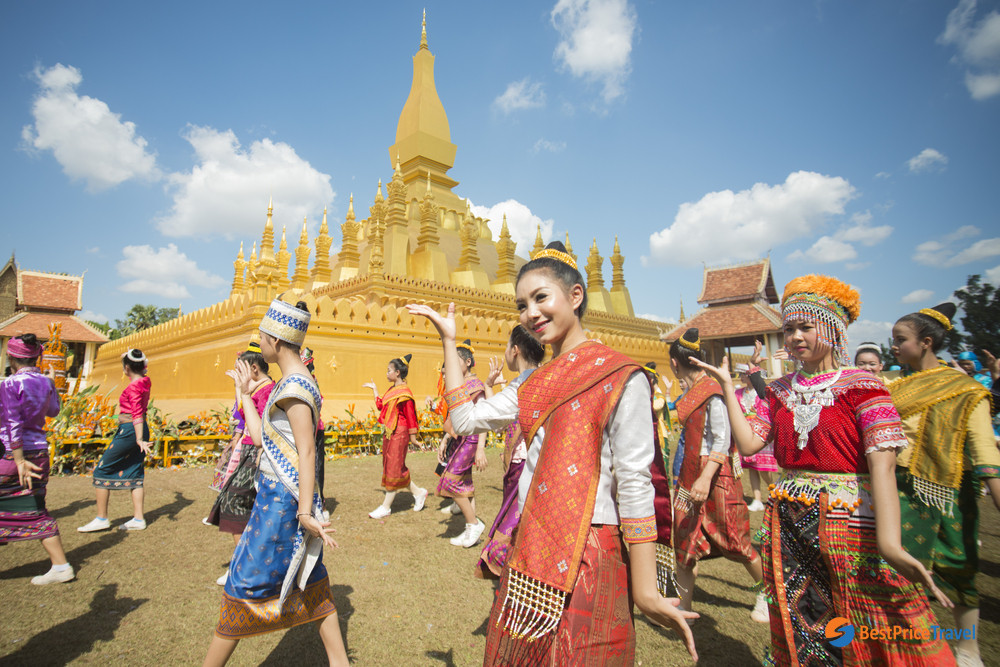 That Luang Festival, one of the most important Buddhist ceremonies

In the area of Ban Nongbone, Pha That Luang is 4 kilometres far away from the northeast of Vientiane. Inspite of lying on the outskirts, it is really convenient to hire a vehicle to visit the Great Stupa. Visitors can book by themselves or via available service in any hotel, guest house or homestay.

The most frequently used means of transport is the tuk-tuk which costs around 60,000 kip (approx. US$7). There is no regular city bus passing there, but you can take a taxi or hire a motorbike, bicycle to combine Pha That Luang visit with other places like Patuxai, Wat Si Saket.

To access the interior area, visitors have to pay an entrance fee of 5,000 kip (approximately €0.5) for each person.