Koh Kong has a long undeveloped coastline and a mountainous, forested and largely inaccessible interior which embraces part of the Cardamom Mountains, Botum Sakor National Park - Cambodia’s largest national park and a section of the Kirirom National Park.

Koh Kong is the most south-western province of Cambodia and one of the largest provinces in the whole country. Koh Kong is linked to Phnom Penh and Sihanoukville by Highway 48, which branches off National Highway 4 at Sre Ambel. The province is roughly a five-hour drive from Phnom Penh.  It's a good scenic drive through some of Cambodia's least developed and unspoiled regions - the Cardamom Mountains.

The province is an increasingly popular gateway to Cambodia from Hat Lek in eastern Thailand, in part due to the reasonably direct access to the port and beach resort town of Sihanoukville. Its capital is Koh Kong, which is located in the west of the province right next to the Thai border.

The provincial capital of Koh Kong is the arrival point for many foreign travelers en route to Cambodia due to the international border crossing with Thailand which lies a short distance from the town. The border is located at Cham Yeam, about 14 km from Koh Kong. Once Cambodia’s Wild West, its isolated frontier economy dominated by smuggling, prostitution, and gambling, Koh Kong is striding towards respectability as Eco-tourists shoo away the sleaze. The town is situated on the banks of the Koh Poi River, which spills into the Gulf of Thailand a few kilometers south of the center. It is surrounded by a large forested area connected to the mainland by bridges and ferries.

The people of Koh Kong speak mainly Khmer, and most speak some Thai as well. You can also find many Chinese and Vietnamese speakers as well as a lot of broken English.

Despite the recent progress of border development, the economy of Koh Kong is relatively low compared with most neighboring countries. The main sector on which most rural households depend is agriculture and its related sub-sectors. Besides, the service sector focuses on tourism and trading activities.

Koh Kong has a long undeveloped coastline and a mountainous, forested, and largely inaccessible interior that embraces part of the Cardamom Mountains, Botum Sakor National Park - Cambodia’s largest national park and a section of the Kirirom National Park. As a sleepy riverside town, there's not much in the way of tourist attractions within Koh Kong itself. However, it's a handy base for boat trips, waterfall, and beach excursions. The town has also become a hub for eco-tourism trips and jungle trekking.

Khun Chhang Khun Phen: About 1km from the provincial town, Khun Chhang Khun Phen stupa lies on a rock in the middle of the sea tributary. The stupa is 4 meters high and made of concrete. The Khmer legend said that the stupa’s establishment related to the love affair of a betrayed wife. Then her husband, named Khun Chhang, complained to the King. After being killed by the King’s order, the husband built a stupa in memory of his wife and their love. Today, Koh Kong residents worship there and often visit the site on national holidays and traditional festivals. 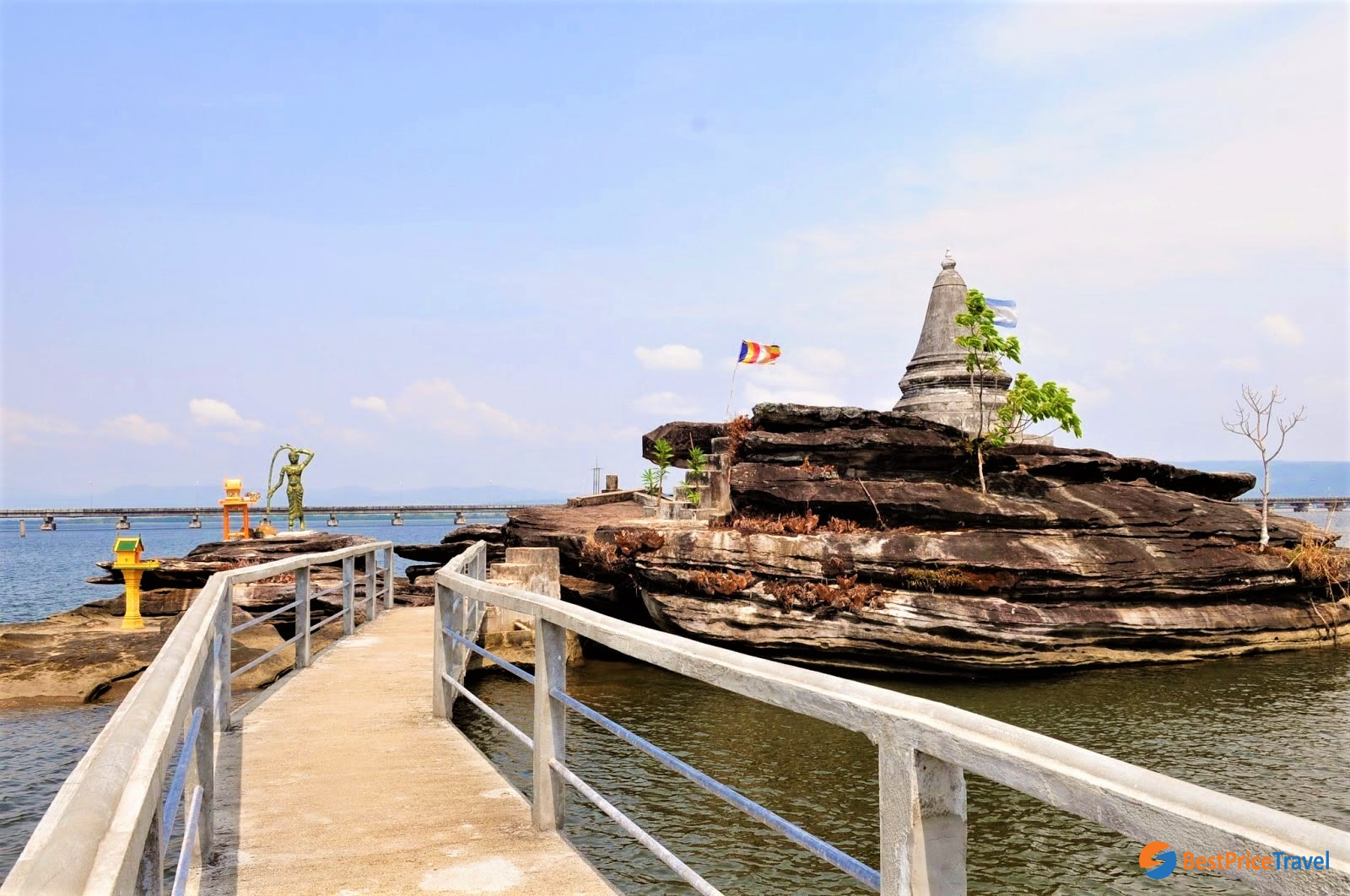 Kbal Chhay Waterfall: Located about 16km north of provincial town, Kbal Chhay, also called Koh Por, is a natural site among a high mountain range and forest. The waterfall is 10 meters high and 8 meters wide during the rainy season. In the dry season, there is less water so that tourists can relax under the big rocks that resemble a cave. At Koh Por, tourists should travel along the stream amid beautiful scenery and enjoy the getaway into the wild. 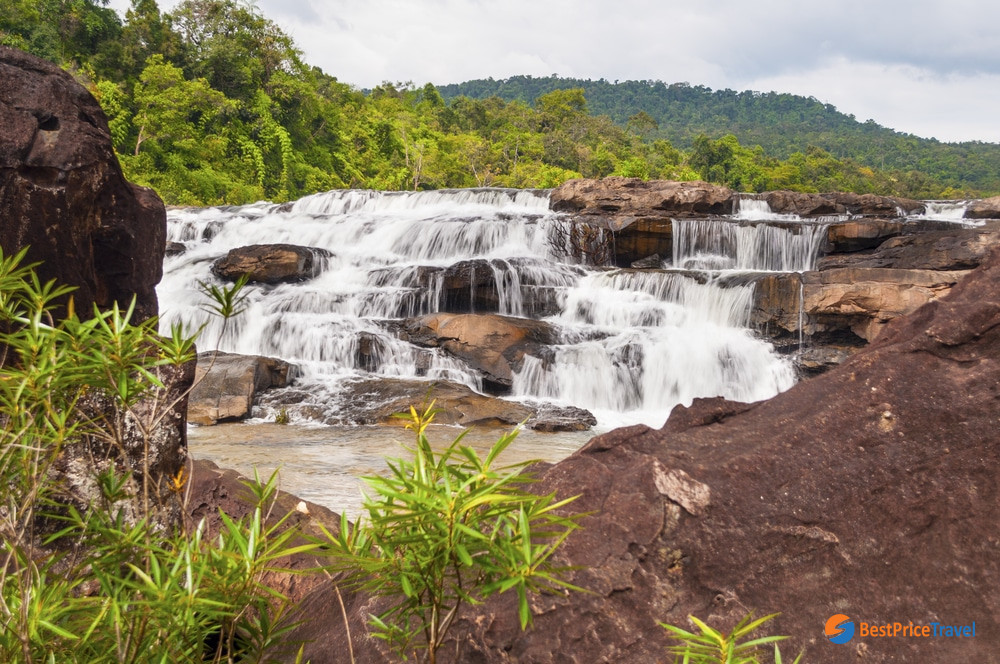 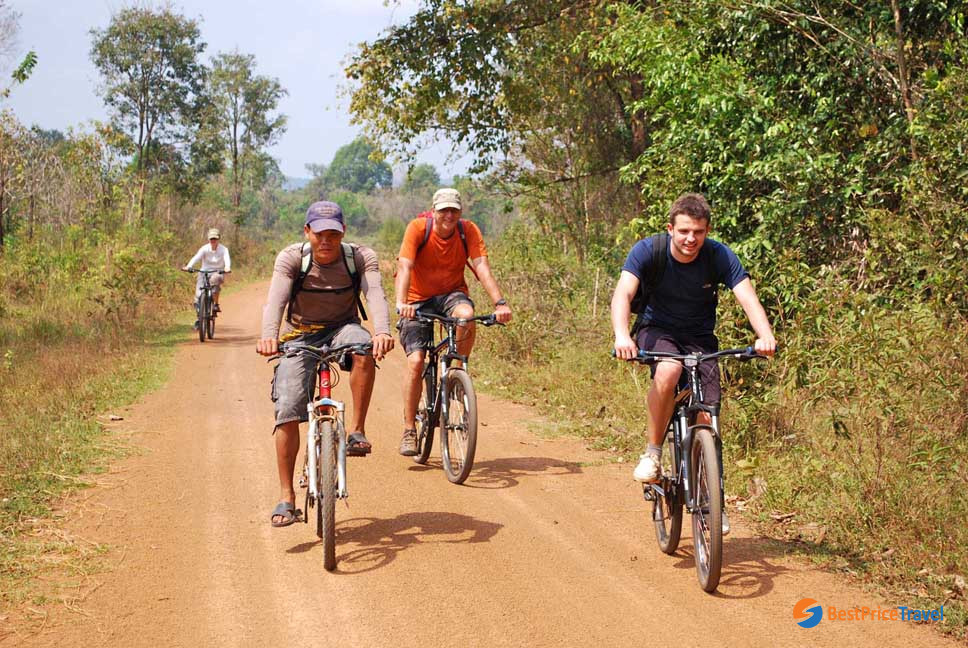 Koh Kong Island: is considered one of the best beaches in South East Asia. There are no accommodations on Koh Kong Island as it is military run and therefore illegal to spend the night, however, day trips are offered various operators in Koh Kong. 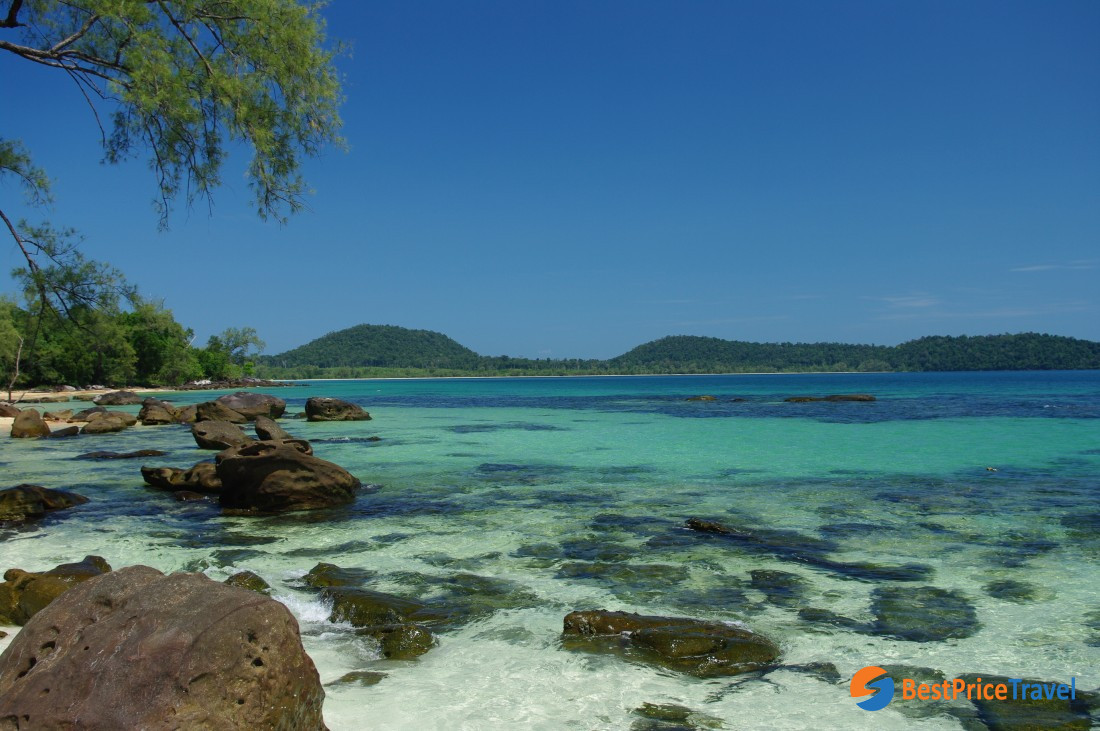 From Phnom Penh or Sihanoukville, visitors can go via Highway 48, which branches off National Highway 4 at Sre Ambel. The road is now paved and complete with 5 bridges, however, there’s a scenic drive through some of Cambodia’s least developed and unspoiled regions – the Cardamom Mountains. Also, visitors can take a minibus or tourist air-con bus to and from Koh Kong, which leaves mainly in the mornings. Since 2019, there is no longer a boat from Koh Kong to Sihanoukville.

From Thailand, the border at Cham Yeam is only around 10km by road northwest of the town. It’s convenient to hire a moto, taxi, or tuk-tuk transferring between the town and the border. You’d better negotiate the cost in dollars as baht prices always work out more expensive.

Note: Depending on the business, prices will be quoted in Riel, Thai Baht, or US Dollars. It's generally best to pay in whichever currency is quoted because the exchange rates are usually unfavorable.