Cambodia Guide - All you need to know

As one of the countries with the longest and most developed history in Southeast Asia. The first civilization known in Cambodia appeared around the first millennium with the birth of the Funan Kingdom, believed to be the first country influenced by Indian culture.

Cambodia, officially known as the Kingdom of Cambodia, is a country located in the south of the Indochina Peninsula in South East Asia. Its total landmass is 181.035 km2, bordered by Thailand to the west, Laos to the north, Vietnam to the east, and the Gulf of Thailand to the southwest. It has a 443 km coastline. 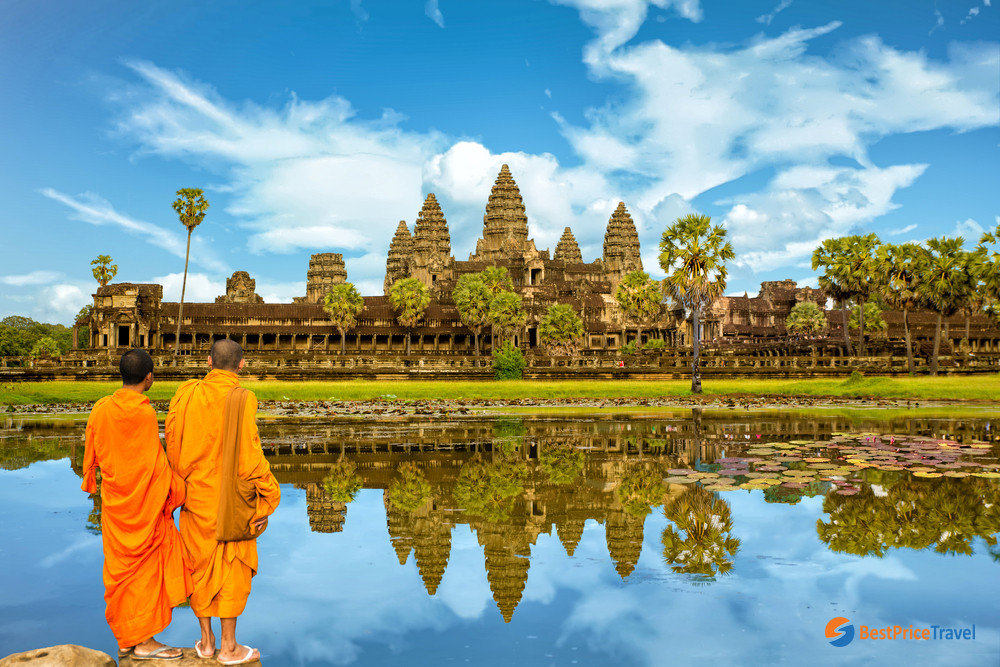 The full name of Cambodia is the Kingdom of Cambodia, which is located on the Indochina Peninsula in Southeast Asia, attracting tourists from all over the world by ancient relics such as Angkor Wat or Angkor Thom monuments, spectacular natural scenes at Tonle Sap Lake or Mekong River, along with marvelous beaches and beautiful islands like Sihanoukville, Koh Rong,... In addition, Cambodia tourism is a great experience for Buddhists who like to explore the ruins of the past as well as for those who have a strong desire to engulf in the wild beauty of nature.

At the present, the culture, the traditional customs as well as the language of Khmer mostly originate from this period. In the late 9th century, the Khmer Kingdom was born by the national hero Jayavarman II who unified the country in the territory of Funan and Chenla before, the capital of that time was Angkor, which was considered as the full flourishing period of Khmer civilization. From the 9th century to the 13th century, Khmer Kingdom built a lot of great landscapes such as Angkor Wat and Angkor Thom,...combined with the development of agriculture, pisciculture, and handicraft. The territory at that time was also expanded From the 13th century to the 19th century, civil wars and colonial invasion had weakened the kingdom.

In the first decades of the 19th century, French colonialists entered Indochina. In 1863, France forced King Norodom to sign a Treaty to place Cambodia under French protection and Cambodia completely became a French colony 90 years later.

Bearing the imprint of religions imported from India, especially Hinduism and Buddhism, so these religious thoughts have dominated and almost strongly influenced all aspects of life, both materiality, and the spirit of Cambodians. Today, Buddhism makes up about 80% population living and working there. This religion has also been associated with the development and prosperity of Cambodia and made an important contribution to creating a distinct cultural identity. In addition, due to import from many countries, Cambodia also converges a unique culture that makes tourists come and learn a lot of amazing things in this country. 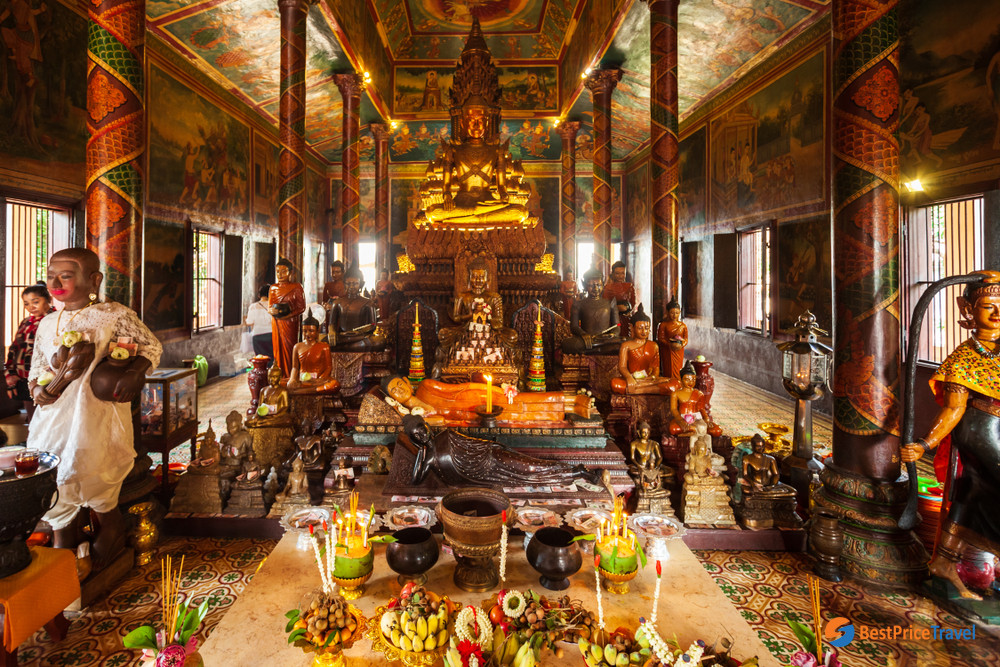 About architecture, it is largely known as the buildings built during the Khmer Kingdom. As above-mentioned, Buddhism and Hinduism as well as legendary thoughts have a great influence on the art of decorating these great architectural works. The basic feature was to build from wood, bamboo, or straw and stone materials. And remaining until today are the stone buildings such as walls, roads, and temples.

Following Buddhism, it means Cambodia's culture owning a lot of different festivals. On occasions, the dances and songs show at festivals also carry the breath and soul of Buddhism. But in Hindu festivals, it looks richer in art performances like the old "Pin Peat" with a range of instruments that are mainly made from bamboo, wood, lumps, etc. Ancient dance praising the creator of Hinduism, court dance art originated from the "Apsara" character in the Hindu legend. In the end, Cambodia with dozens of ethnic groups, each of them having different dance tunes surely brings visitors unforgettable cultural art parties when traveling to this kingdom.

The best time for Cambodia traveling 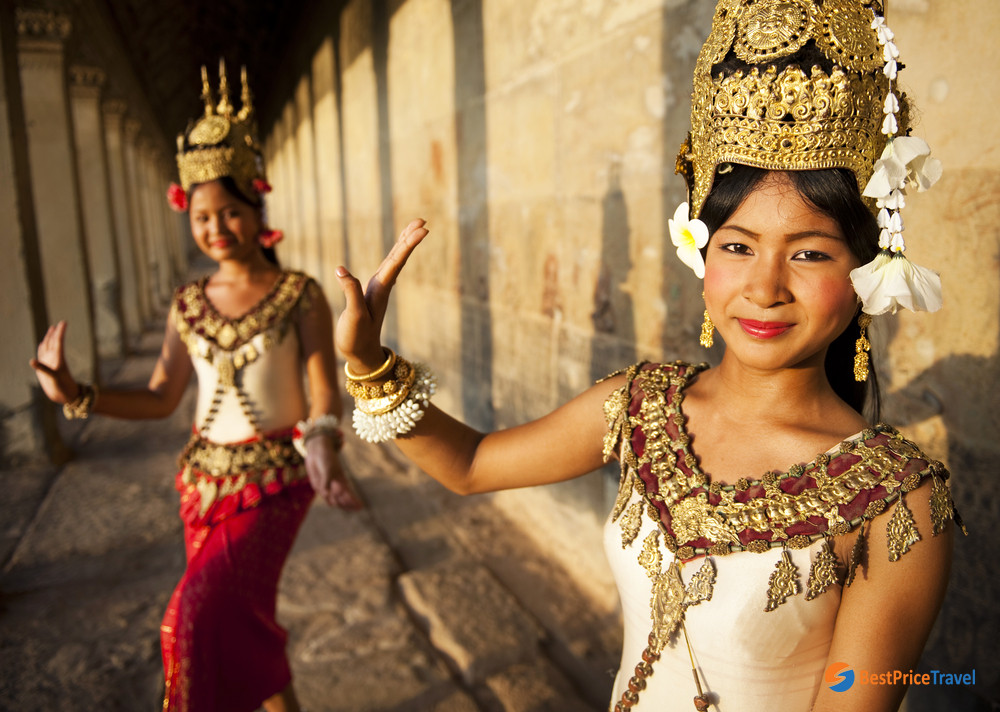 The climate in Cambodia is relatively similar to Vietnam having the same seasons: rainy and sunny but mostly hotter. Therefore, when traveling to Cambodia, visitors pay attention to avoid hot sunshine periods. From November to February is the ideal time for Cambodia tourism, at this time the weather is comfortable, not too hot, and less rainy. In April annual, is the Tet holiday of Khmer so there are many festivals such as Songkran. From mid-November, there is a traditional boat racing festival.

How to get to Cambodia?

In fact, the dollar is popular there and you should prepare more small USD for convenience. You can also use Riel (called Ria) with the rate is approximately 4000 riels = 1 USD. If you travel by road, you should exchange at the border gate and remember that don't change money from USD to Riel, the exchange rate will be lower. And you can also use Vietnamese Dong in some places.

Top Cambodia Destinations - Where to go?

Top places to visit in Cambodia