Angkor Wat temple complex has turned Siem Reap into one of the world’s premier travel destinations as it is one of the largest religious monuments in the world.

Angkor Wat is the temple with the most magnificent architecture in the Angkor Archeology Park with a main entrance to the west straight towards the sun rising. According to Khmer, Angkor means the capital city and Wat is a temple, Angkor Wat means the city of the temple where has once worshiped Vishnu God of Hinduism during the Khmer empire. This is one of the most important monuments in Cambodia, considered to be the pinnacle of Khmer art and architecture, and appeared on the national flag.

The design and construction were conducted under King Suryavarman II (reigned from 1113 - 1150). He was a heroic man and had smart diplomacy, he was also a brilliant military and talented architect, from that reason in his administration, there appeared many achievements for Cambodians in particular and for the world in general. Angkor Wat was built 37 years, at the first time, it had the purpose of worship Hinduism, thus the temple architecture simulates the great image of India's Meru mountain. But later in the late 12th century due to the entering and thriving of Buddhism, Angkor Wat turned to worship Buddha.

Angkor Wat has 398 rooms, connected by a corridor measuring around 1,500 meters. Above, 5 towers shaped as lotus, interlocked with 3 architectural layers, in which the highest tower reached 65 meters, 4 sub-towers have 40 meters in height. The main path to Angkor Wat is also made of 230 meters long stone, nearly 10 meters in width and 5 meters high compared to lake water on both sides of the temple. The whole temple also retains the vestige of an ancient civilization with many pictures of stone carvings such as giant bas-reliefs, doors, ceilings, roofs,.. all present an extraordinary power and skillful hands of ancient Khmer. 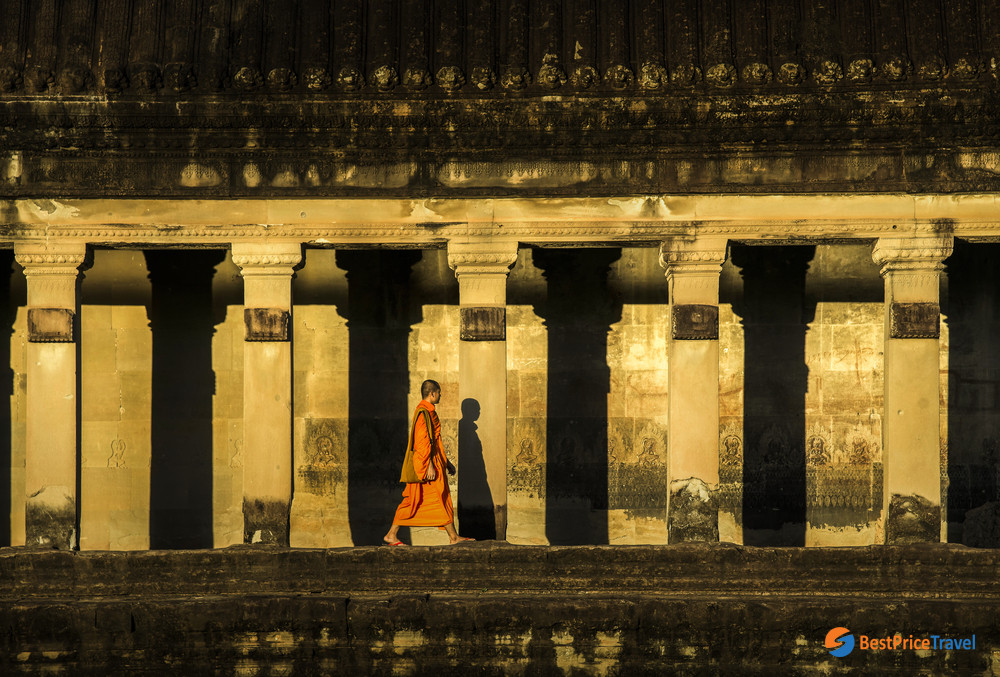 When visiting Angkor Wat, you should give yourself a beautiful sunrise there. Many tourists welcome the new day as a memorable experience. Late afternoon and sunset are also ideal times to admire the beauty of Angkor Wat. Remember to bring a flashlight if you plan to visit in the late afternoon because the temple is not illuminated at night. Pay attention to many steep steps so you should choose the right shoes for the trip. Hiring a bike to ride inside the complex is an interesting thing but you have to prepare good health because of the wide area. Stopping at some street stalls around the temple for buying soft drinks and taking a break. If you look for souvenirs, the small stalls selling local art and crafts are a good choice, being right outside Angkor Wat.

Taking approximately 30 minutes from the center of Siem Reap, you can spend one day to discover only Angkor Wat or three days, seven days for the whole archeological park, it depends on you. Visiting hours of Angkor Wat are daily from 5:00 to 18:00. And last but not least, the most important notice that you should dress properly, covering your shoulders and knees when visiting the temple. The sun is likely to be quite hot, so bringing a hat and wearing good-quality walking shoes in your luggage.