Wat Rong Khun is a pagoda completely covered in white with unique architecture. This beautiful white pagoda is voted as one of the most beautiful temples in the world and has also become a national cultural treasure of Thailand.

Perhaps when mentioning Thailand’s sacred destinations, you will think of the famous golden temples in Bangkok and other cities. Most of the more than 40,000 Thai Buddhist temples are yellow in color and have a significant historical impact on the Thai. However, in Chiang Rai province, there is a pagoda completely covered in white with unique architecture - that is Wat Rong Khun. This unique white pagoda is voted as one of the most beautiful temples in the world and has also become a national cultural treasure of Thailand. 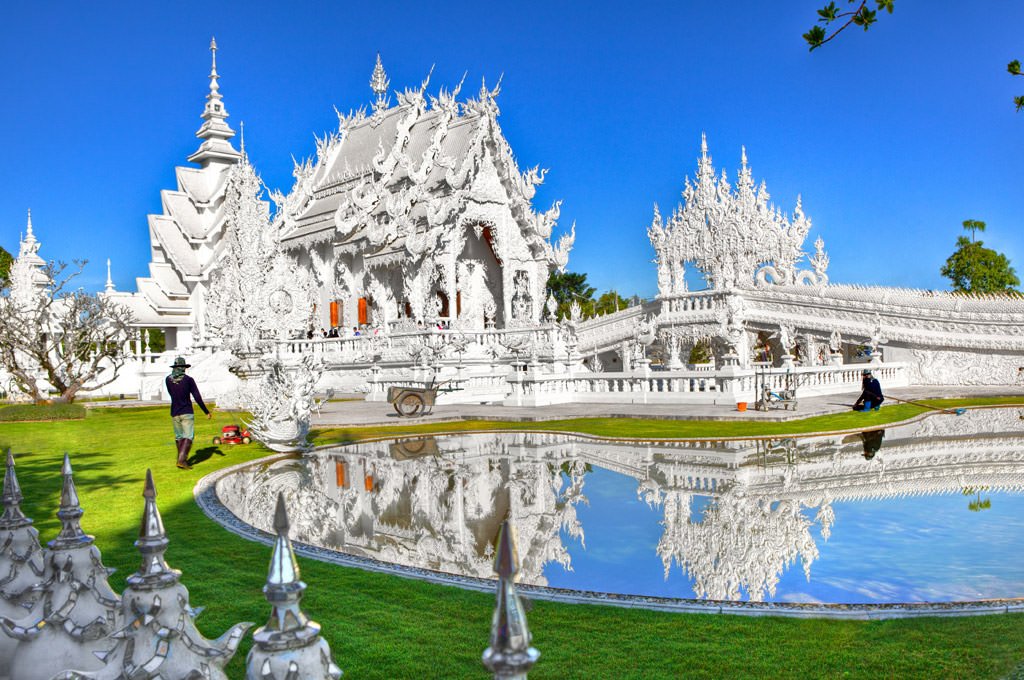 Impressive outside of Wat Rong Khun

He put all his effort into realizing his ideas with this religious work. Wat Rong Khun Temple was built in 1997 and is still not complete because Mr. Chalermchai wanted to create a complex of 9 main buildings (the main hall, the chapel, the museum, the art gallery, the accommodation area)… that are decorated sophisticatedly yet possessing ancient features with quality glass and plaster materials.

According to Chalermchai's calculations, to complete the Wat Rong Khun temple complex, he will have to work hard for about 60 - 90 years. But he is now over 60 years old. So he allowed five of his outstanding students to help him so that the project could be completed before he passed away. 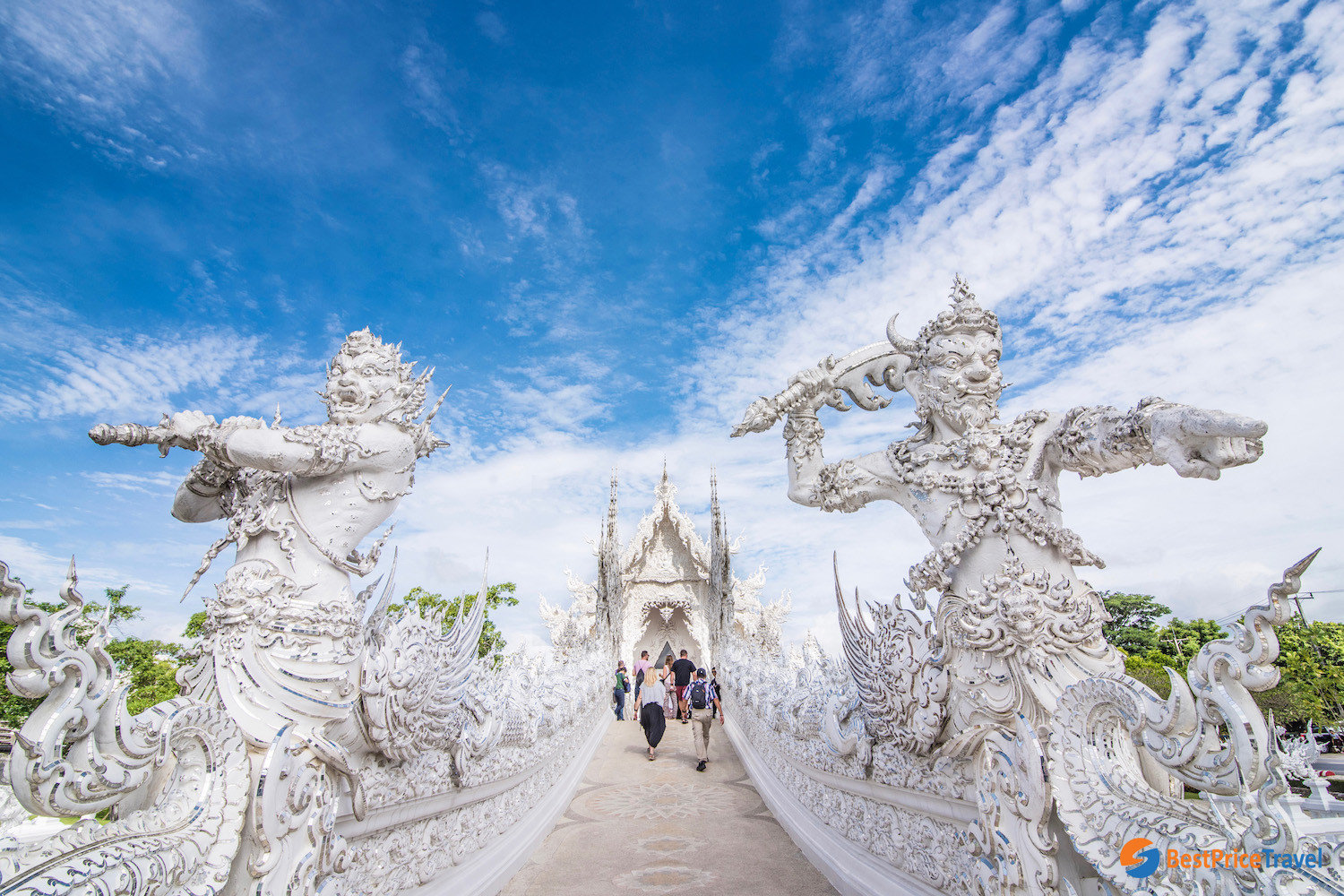 The entrance into the White Temple

Each temple's work has different meanings and encourages visitors to learn about them. At the entrance is a bridge crossing a small river. In front of the bridge are two round pits with hundreds of hand figurines symbolizing the desire for fullness. This area represents the worst things that people suffer. The bridge facing the main hall called the "cycle of rebirth" symbolizing the circle of death and rebirth.

It represents the path to happiness through worldly misery such as greed, lust, and temptation. After crossing the bridge, visitors will encounter the "Gate of Heaven" protected by two giant mascots representing Death and Rahu. The most important area of Wat Rong Khun is Uboso- a building painted white with pieces of reflective glass through plaster, ornate with architecture such as 3-storey tiled roofs and stylized Naga snakes on the railing.

On the walls are paintings depicting stories about Buddhism. On the back wall of Ubosot is the golden fresco of Buddha and some surrounding Buddha images. 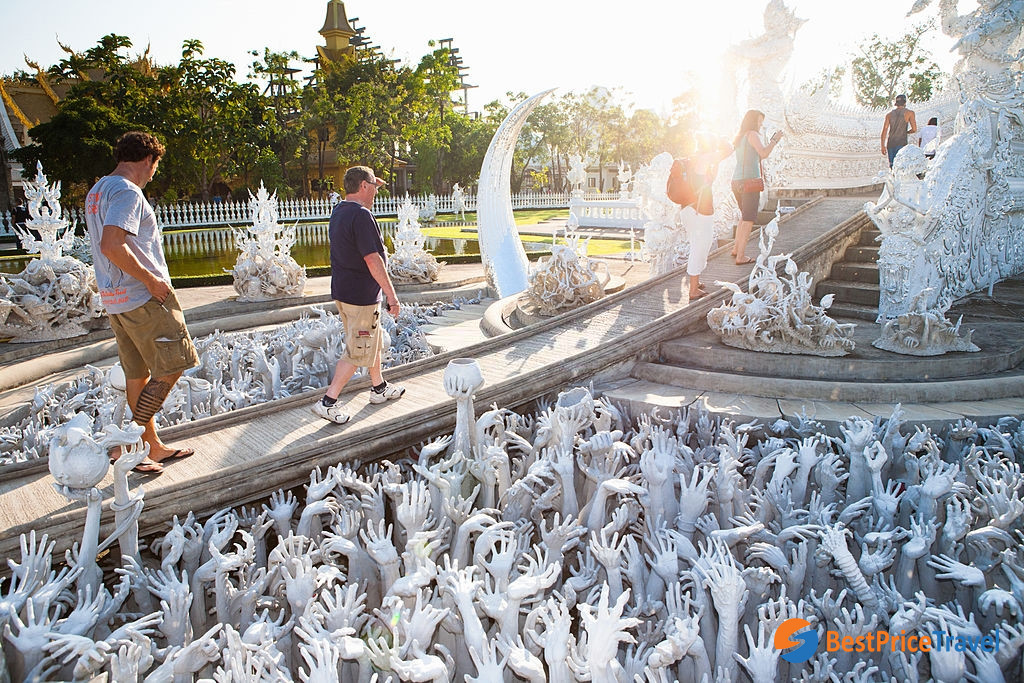 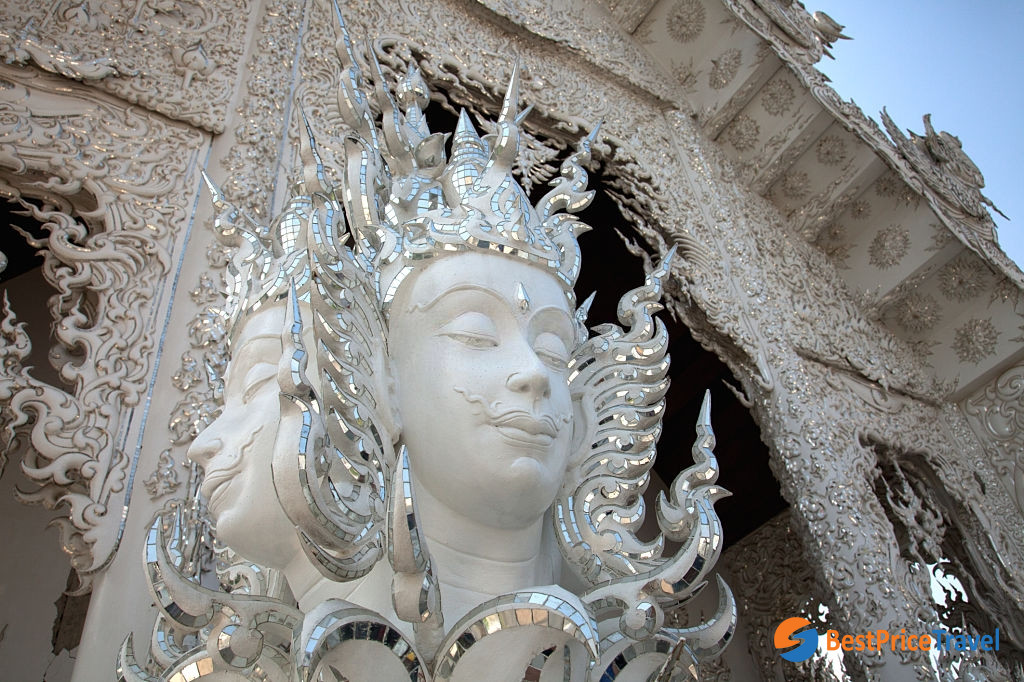 Golden Palace is probably the most striking structure in the middle of a white area. Gold symbolizes man's desire for money as an idea for him to focus on the mind instead of possessing ordinary matter. Interestingly, this building is just a restroom. With such spectacular architecture, every corner of Wat Rong Khun can offer tourists a great spot for photogenic pictures. There are various options to get to Wat Rong Khun, including taxi, bus, tuk-tuk, or bikes.