Besides the mysterious white pagoda Wat Rong Khun, Wat Rong Seur Ten blue temple with impressive architecture also attracts countless of tourists everyday. You can get to this temple by bus or tuk tuk.

Chiang Rai is known as a peaceful land, where there are many primitively beautiful natural scenes and temples with unique architecture that have left an unforgettable impression in the hearts of tourists. Besides the mysterious white pagoda Wat Rong Khun, Wat Rong Seur Ten blue temple with impressive architecture also attracts countless of tourists everyday. You can get to this temple by bus or tuk tuk. 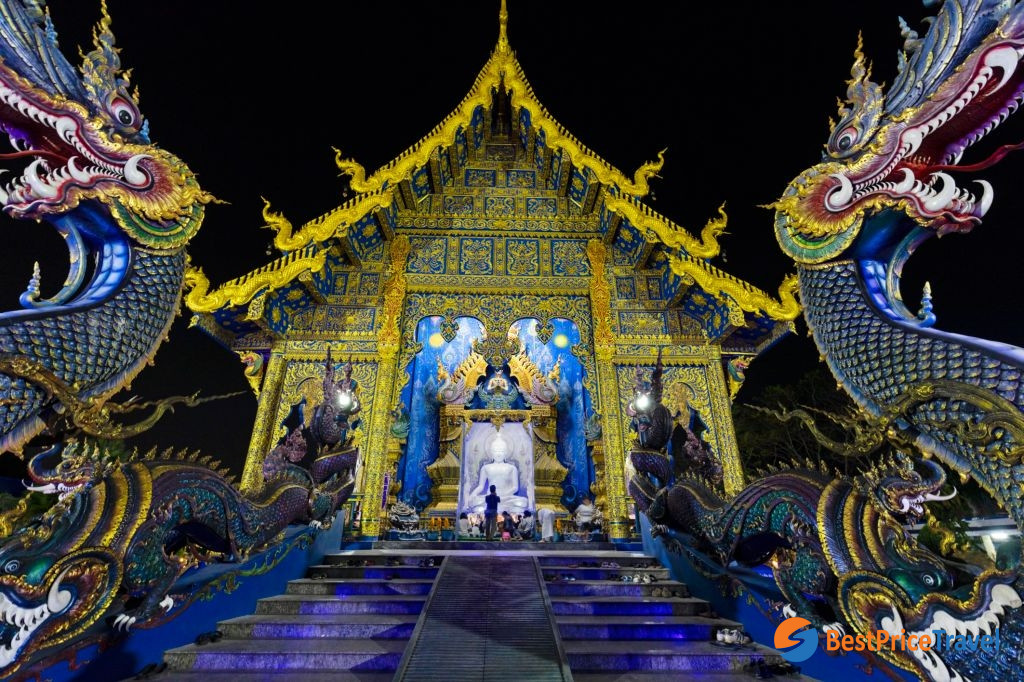 The temple was established in January 2016, possessing a sapphire blue shade and is a tourist destination visited by many international guests. The temple has outstanding gold-plated structures against a blue background inspired by traditional Dharma, evoking serenity and relaxation in every tourist. It is no coincidence that this place bears many similarities with the famous Wat Rong Khun temple.

The artist in charge of designing the blue temple is the student of Chalermchai Kositpipat, an artist creating the beautiful pure white temple of Chiang Rai city. Therefore, the main colour-choosing style, the roof style with delicate dragons, the decoration and sculpture of this place are greatly influenced by Wat Rong Khun. 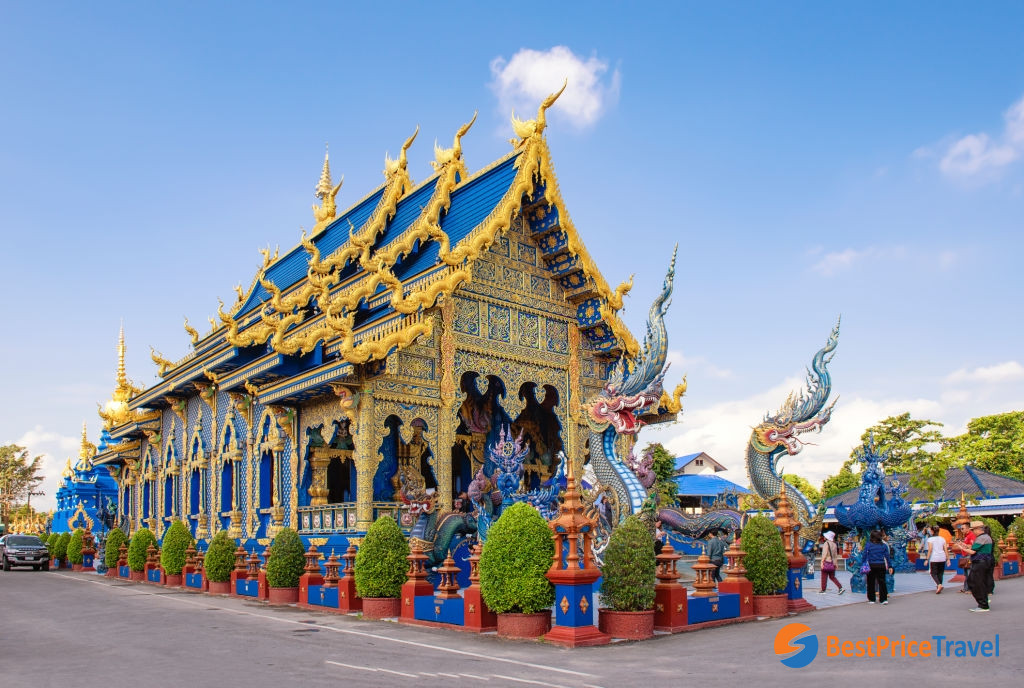 Wat Rong Seur Ten was renovated based on the ruins of an ancient temple abandoned about 100 years ago. Currently, it is considered by many to be the most beautiful temple in northeastern Thailand. Thanks to the ingenious talents of the architectures who carried out the project, the two colours of green and yellow, even though they have hot and cold properties, are still in harmony and resonate at Wat Rong Seur Ten.

The temple space is filled with elaborate sculptures and decorative details but still feels very elegant. Right from the entrance, the temple has strongly impressed visitors with sophisticated sculpting shapes on the columns of the welcome gate.

Walking a few more steps, you will be overwhelmed by the splendour of the main building. Not only amazed by the haunted blue colour, but most tourists are also persuaded by the incredible fussiness of the temple, covered with meticulous gilding decoration details. 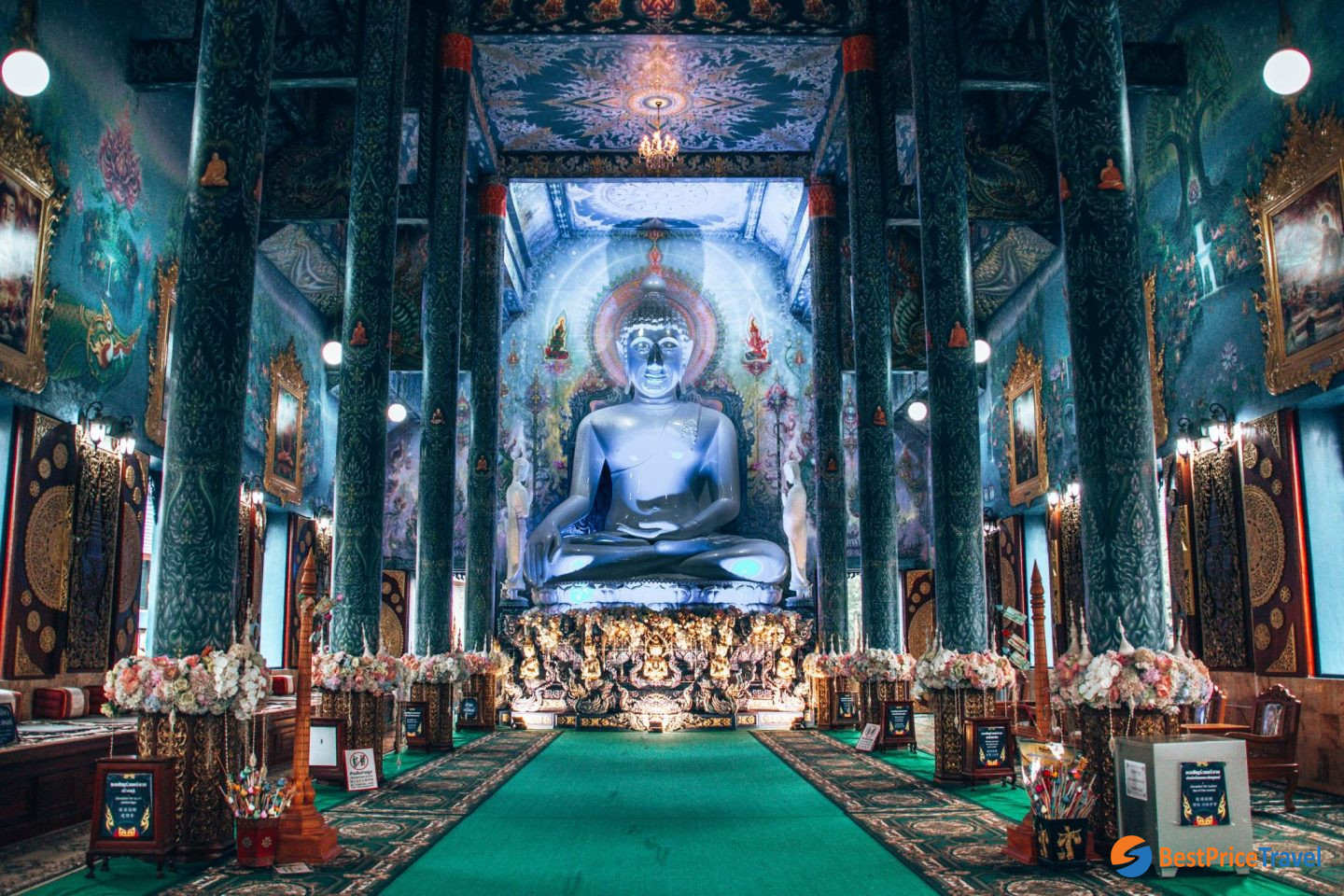 Compared with the 2 temples: the white temple and the black temple, the blue temple Wat Rong Seur Ten has not been promoted much and thereby not known by many people. Wat Rong Seur Ten impresses visitors with its eye-catching blue background paintings with details inlaid with gold on the outside.

According to Buddhist legends, the blue colour represents the Buddha Dharma, which demonstrates the virtue of the Buddha spread everywhere in the world and becomes the natural teaching of Buddhism. One of the special features that help create the impression of the temple is that in the main hall where the pure white jade Buddha image is placed, the large Buddha image helps brighten up space.

On the two sides of the wall, there are beautiful murals of all the architecture, the calm atmosphere makes visitors feel interested and want to explore even more about the surrounding area. 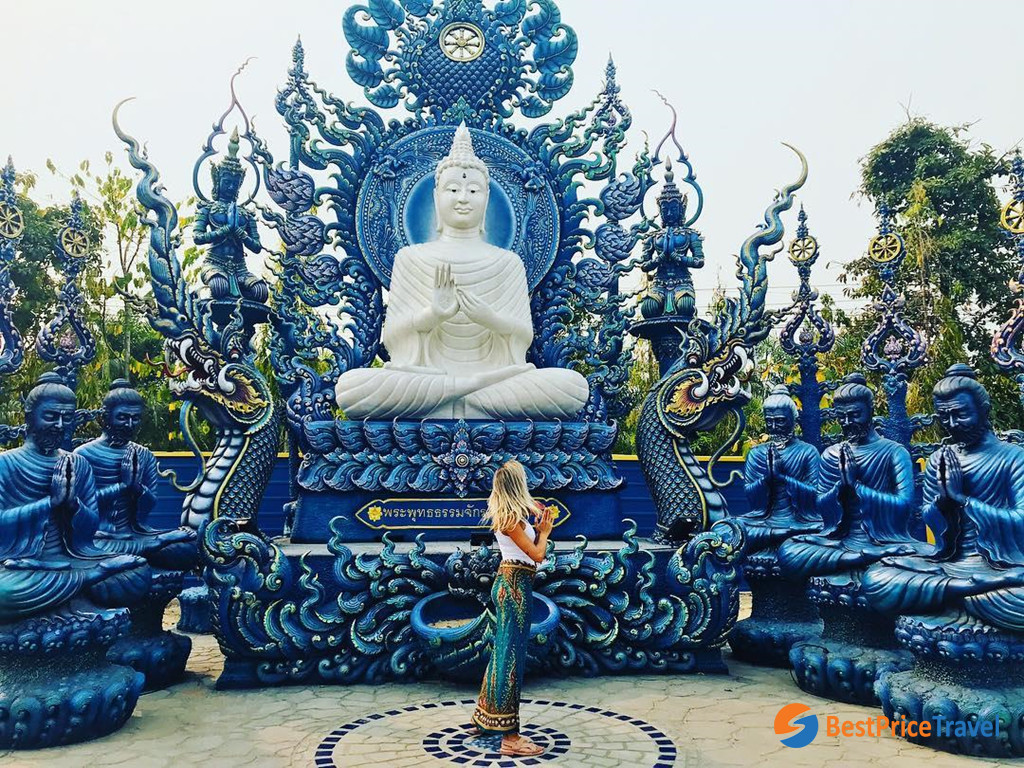 Wat Rong Suea Ten is one of the destinations worth visiting when you have the opportunity to come to Chiang Rai. In addition, you will also have a chance to discover many natural types of scenery, the history as well as culture of the people in the area.