Wat Xieng Thong presents a fine example of the classic Luang Prabang architectural style with a sweeping two-tiered roof and ornate mosaics including a beautiful ‘tree of life’ glass montage on the rear temple wall.

Wat Xieng Thong, one significant religious emblem of the Buddhist architecture, is truly a masterpiece of mosaics and carved wood featuring traditional Lao style. Located in the Northern Laos on the bank of the Mekong River, Wat Xieng Thong is considered as the most historically impressive temple among Luang Prabang’s ornate ones.

Dating back to the year of 1560, Wat Xieng Thong was constructed in the order of King Setthathirath. This historical witness had undergone several periods of terrible devastation and well-preserved reconstruction after the invasion of plunder during the 19th century. Despite remaining its original structure throughout history, it’s difficult to determine the initial form of the temple. In the past, the temple was used as Royal Temple where the coronation of Lao Kings occurred and also as the gate of city where the official Royal departed and arrived. Nowadays, Wat Xieng Thong is a major gathering place celebrating significant annual festivities in Luang Prabang. 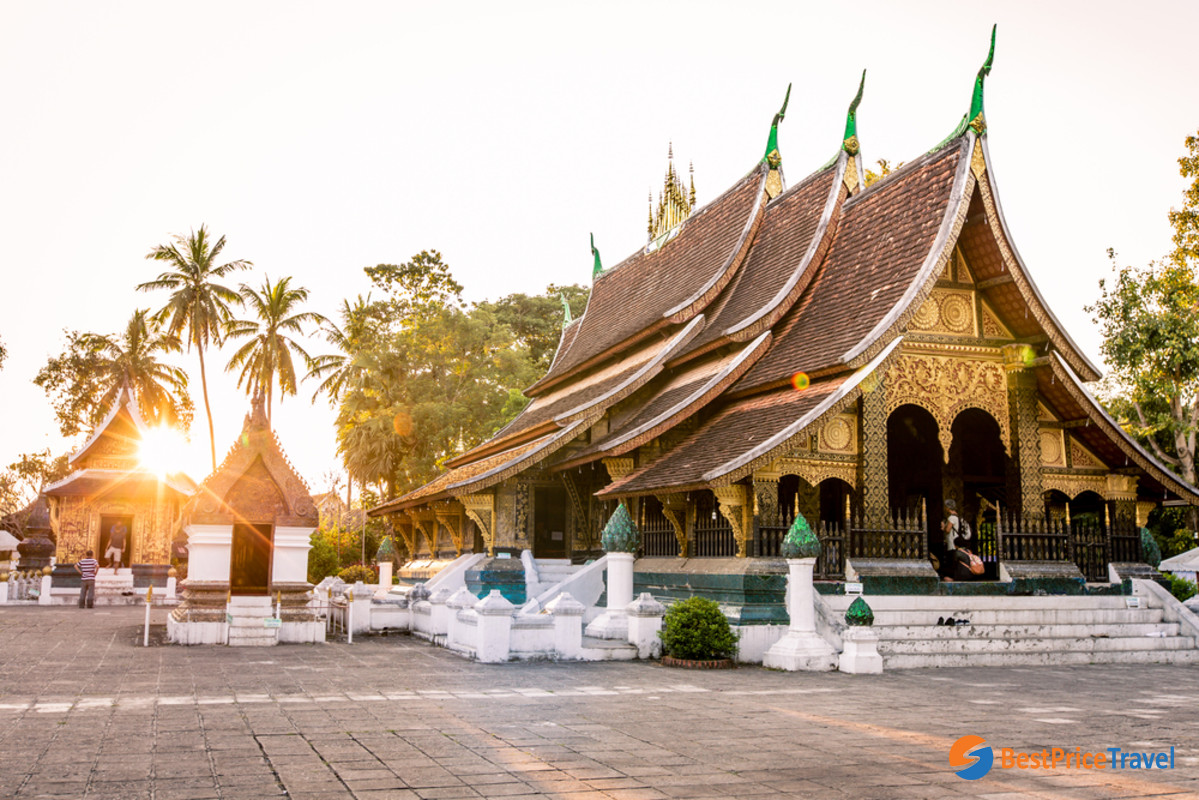 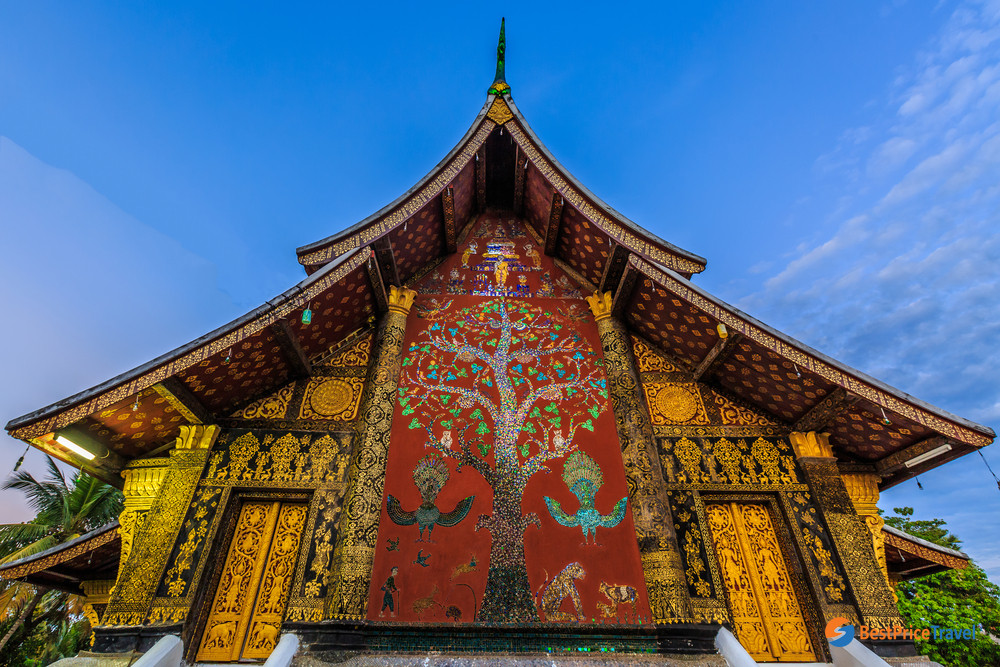 The most superb building is the temple’s congregation hall, called the sim, which stands out with sweeping roofs on three levels extending almost to touch the ground. Both the sim’s exterior and interior are exquisitely decorated with gold stencilling walls in black lacquer presenting floral motifs, animals, scenes of daily life and Jataka tales. One of the featured walls depicts three worlds of Heaven with the Buddha and several deities, the Earth with people and trees and Hell with a scene of receiving punishments for human sins. 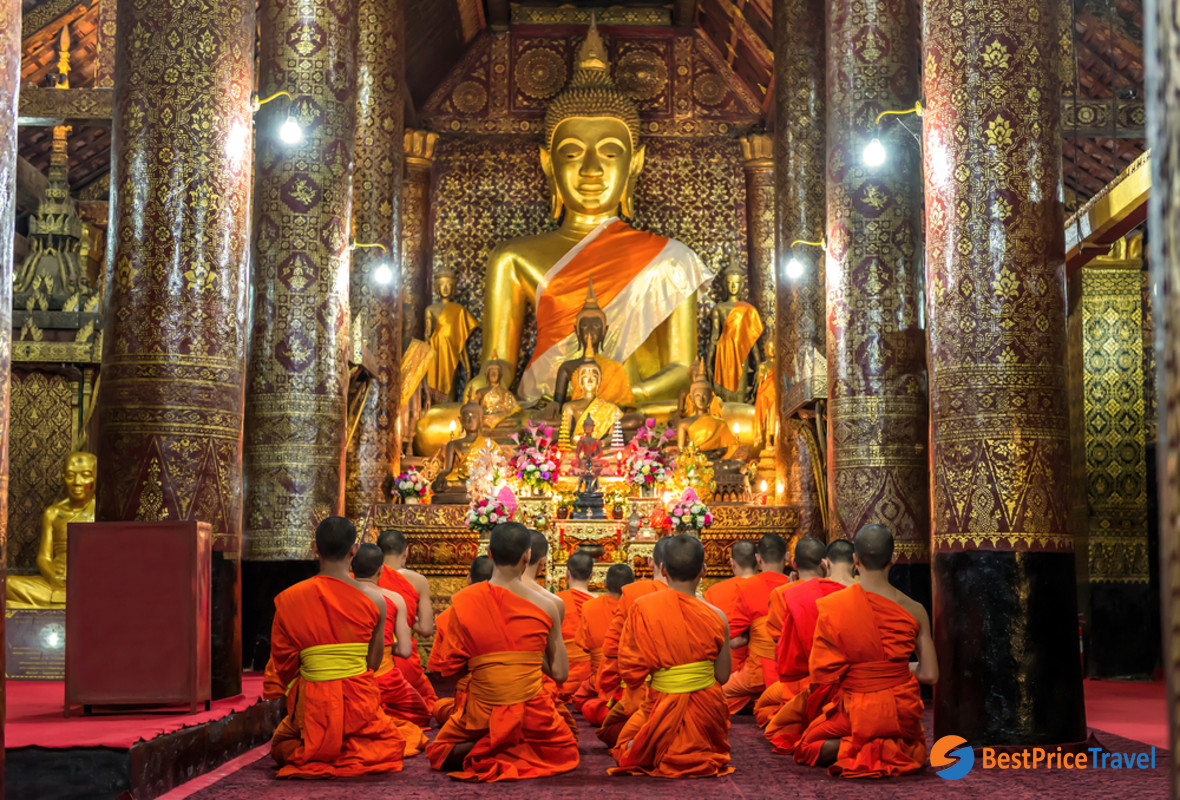 The monks are praying in the temple hall

Another well-known legacy of Wat Xieng Thong is the Tree of Life representing the legend of the temple’s construction. Posted on the back of the main temple wall, the glass mosaic tree is a stunning artwork of a Lao master craftsman in 1960.

Also there are the Chapel of the Standing Buddha and the Chapelle Rouge both adorned with colorful mosaics on pink backgrounds; the most recent structure Royal Funerary Chariot Hall where contains King Sisavang Vong’s gilded funeral carriage and his royal family; the Ho Trai library; a pavilion of the seated Buddha; the Drum Tower used to call the monks to prayers; several stupas and the monks living quarters. 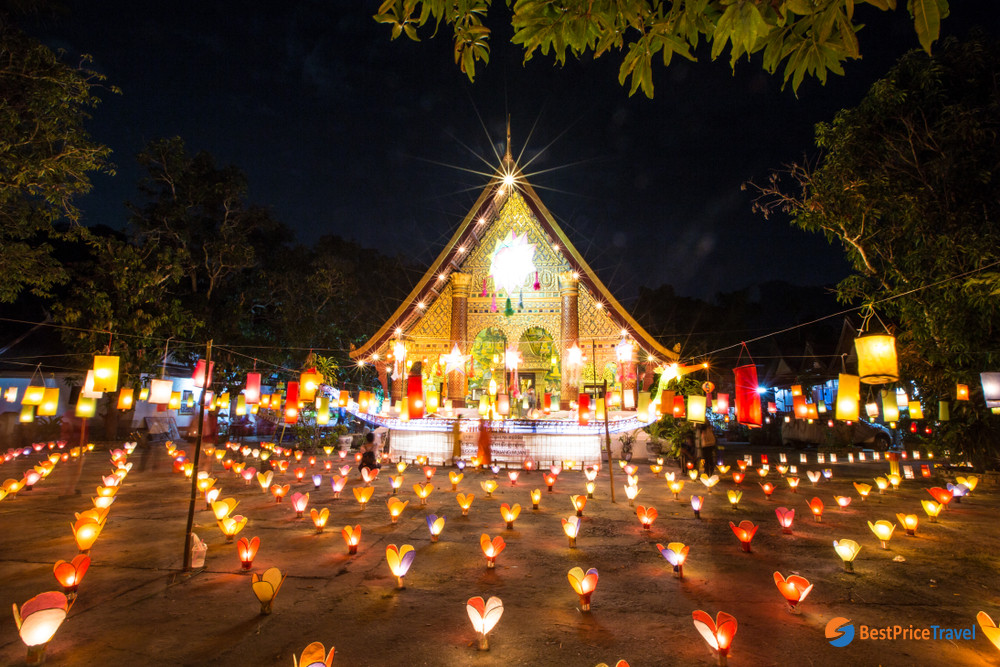 The temple allows everyone to visit daily from 8am to 5pm. Tickets are sold at the makeshift box office at the main entrance at the cost of 20,000 kip per person. To enter the temple, visitors should follow the dres's code which means no bare shoulders, covering the legs, taking shoes off before entering temple buildings. At the box office, there are available rented Laotian long skirts costing 5,000 kip for those who don’t meet this standard.

In the city of Luang Prabang, there is no bus to get the temple; hence, you can reach there by foot or a tuk-tuk that cost about 15,000 – 20,000 kip depending on distance.