Awk Phansa Festival in Laos is considered a festival of lights held on the full moon day of the 11th month in the lunar calendar. Awk Phansa Festival features a great diversity of Buddhist traditions and cultural activities in Laos.

Laos is one of the most beautiful destinations of rich culture and religion in Southeast Asia. Throughout the year, there are a great diversity of festivals and celebrations which have a strong bond with agricultural seasons and Buddhist holidays in Laos. You can check this out for deeper insights of significant festivals in Laos. Among the most significant Lao festivals, Awk Phansa Festival is a worthwhile occasion for visiting this laid-back country.

On the 15th day of the 11th lunar month, Lao people celebrate Awk Phansa Festival as a mark of the end of Buddhist Lent. It usually occurs in September or early October, three months after Khao Phansa – the full moon day of the 8th lunar month marking the begin of rainy season.

According to Lao tradition, Buddhist Lent is the annual three-month rains retreat known as Khao Phansa. The legend said that several monks who traveled during Khao Phansa and damaged local plantations as well as news of this event reached the Buddha. That’s the reason why monks and novices are required to stay in only one specific temple and not allowed to wander to other places during Buddhist Lent. It’s time for contemplation and meditation. 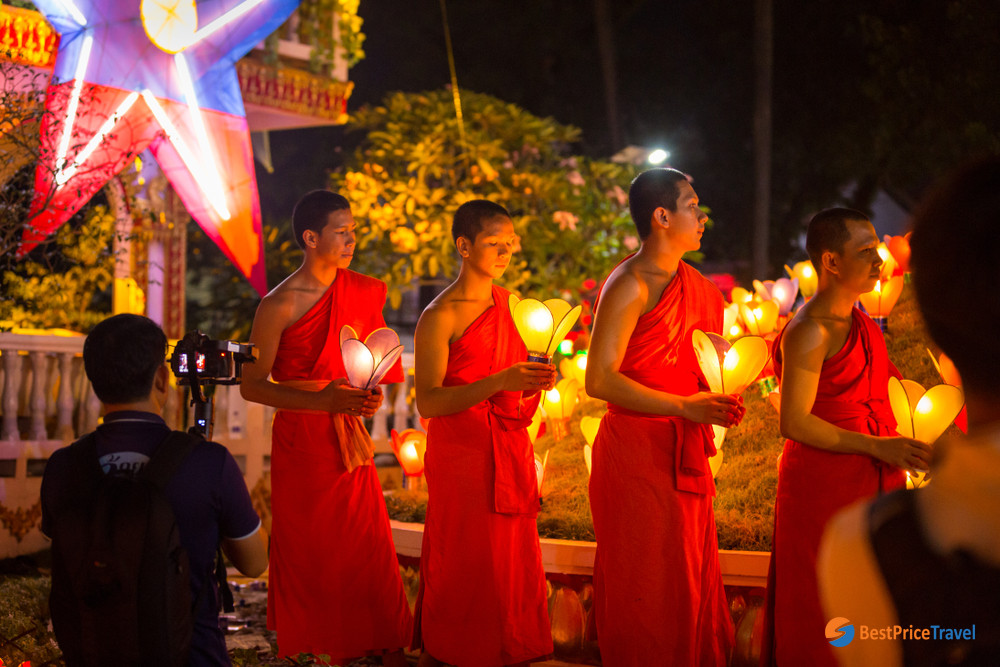 Monks are praying at temple in Awk Phansa Festival

Awk Phansa Festival is a multi-festival day since a wide range of events and activities are held in order to pay respect to the Buddha and to thank the mother of rivers for providing water for human lives. Some believe that the Lai Heua Fai procession (Illuminated Boat procession) is aim to worship Nagas that lives in the river, while others send the lighted boats down the river to float bad luck of the past year away and to ask for blessing as well as good luck in the new year.

Most towns throughout Laos are decorated by thousands of lights during Awk Phansa Festival, which is also called the Festival of Lights since candlelight are brightened everywhere from the streets, outside the local houses to the sanctuaries. In larger towns, the streets and waterway banks look more stunning with sparkling little boats made from banana stems or banana leaves brightened with candles, incense and blossoms down the rivers.

This is a colorful ritual which has been carried on by the Laotian for thousand years. On Awk Phansa Day, monks decorate the temple grounds with handmade paper lanterns, lights and candles. The most striking activity during the Festival of Light is the Lai Heua Fai which is celebratory with costumes and fire boat processions. 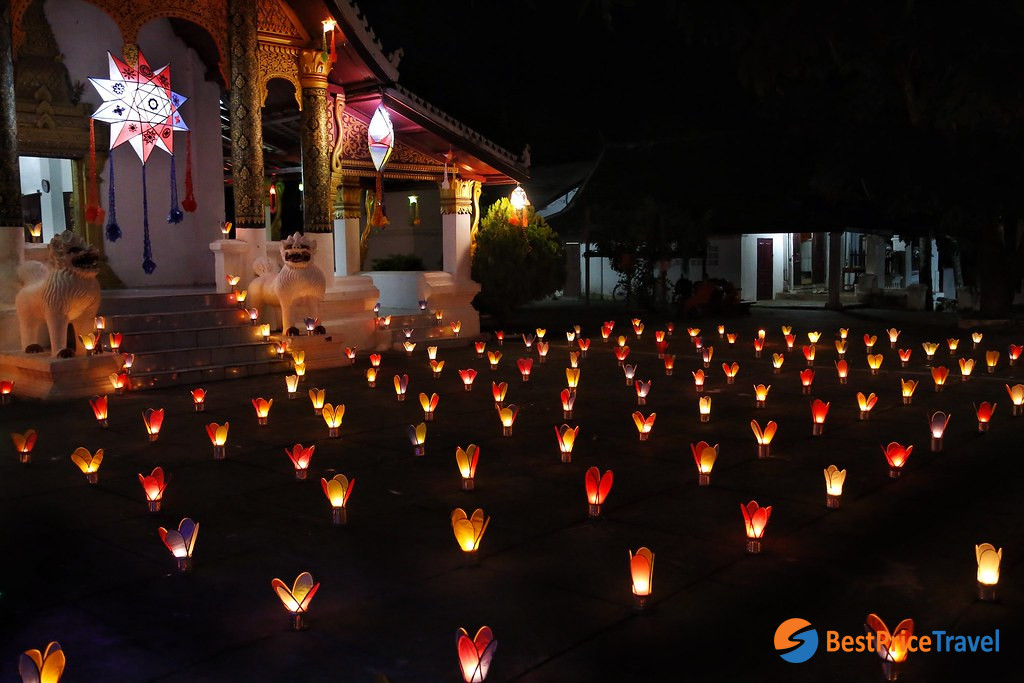 The Festival of Lights is known as Awk Phansa Festival

Awk Phansa Festival is a special occasion of numerous celebrations. The Laotian people have a great diversity of traditional customs such as giving up drinking, smoking, eating meat for Lent; going to the temple often to practice mediation; joining the candle light ceremony; listening to the monks chanting and giving alms.

At Awk Phansa Day, the Boat Racing Festival in Vientiane is the most striking and spectacular event expected by everyone. It’s called the Lai Heua Fai which is held on the second day of the festival. On this day, the town becomes more alive and bustling with festivity and noise of banging drums, singing, even screaming. The streets are filled with stalls selling food, clothing and other items; and sideshows where you can join small games with prizes. As the races start around 9am, the heats start to kick off and thousands of spectators cram along the river banks to cheer their teams. The boat racing happens from morning to mid-afternoon, by which time everyone is quite merry. 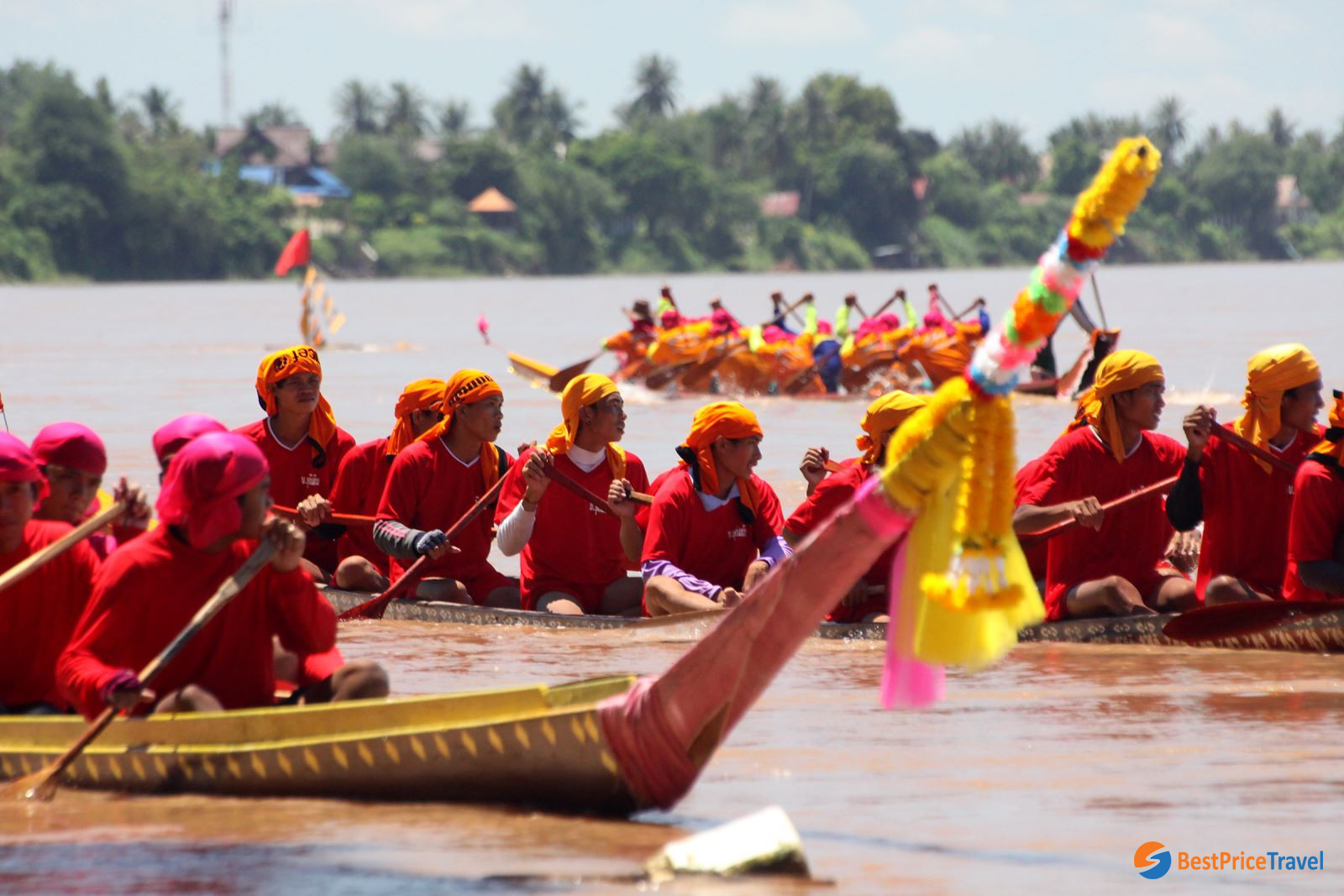 In the evening of the Awk Phansa Day, a celebration of the Naga Fireballs is supposed to appear as a phenomenon peculiar to the Mekong. The Naga is said to be a legendary water dragon living in the Mekong River. At the night of Awk Phansa Day, the Naga is believed to shoot up pink-red fireballs to signify this occasion. Today, there is a festival surrounding this time and certain areas nearby the Mekong stretching over 20km between Pak-Ngeum district, about 80km south of Vientiane, and Phonephisai district in Nong Khai province, Thailand. 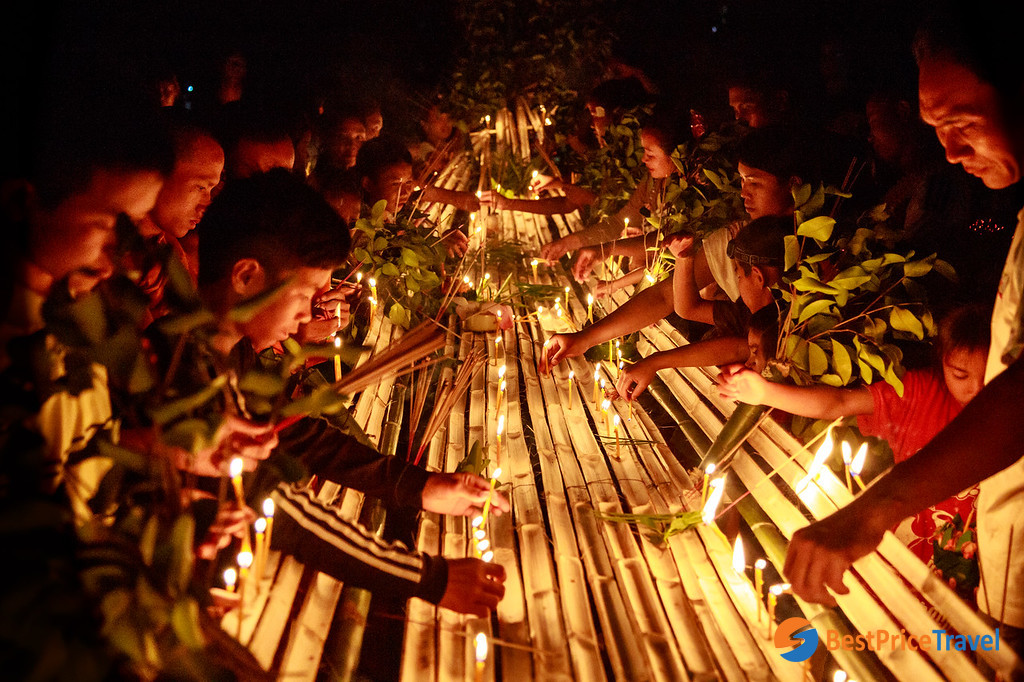 The Laotian people are lighting candle on Awk Phansa Day

The Awk Phansa Festival is a perfect time for visitors to visit Laos as they will have chances to engage in more exciting activities and to see how the locals celebrate festival in the Lao traditions. Additionally, it’s time of the green season when you can contemplate the stunning scenery of green forest, rice paddies in fresh air. The only drawback of joining Awk Phansa Festival is the crowds and a chance of rain for 1-2 hours. Here is all you need to know before traveling to Laos.

If you’re planning to get deeper insight of Lao culture, find yourself the most suitable Lao tours with BestPrice Travel. Take your time visiting and discovering the hidden charm of Laos.