The Mahamuni Pagoda or Mahamuni Buddha temple is one of the most important Buddhist pilgrimage sites in Burma. It is highly venerated in Burma as it is seen as a central of many citizen's lives and an expression of representing Buddha’s existence.

Located in the southwest of Mandalay city, Mahamuni Temple is a famous Buddhist relic and the most important pilgrimage site of Buddhists in Myanmar. According to legend, during the 4th Buddha's visit to Arakan, King Candrasuriya in this area asked for permission to sculpt a statue of Buddha to worship at Mahamuni Temple on the Sirigutta Hill. In 1784 when King Bodawpaya took over Arakan, he transferred the Buddha statue along with the spoils and prisoners of war. He then built the now Mahamuni pagoda at the foot of Mandalay hill to preserve the most sacred Buddha statue in the region, to assert his devotion to Buddhism. 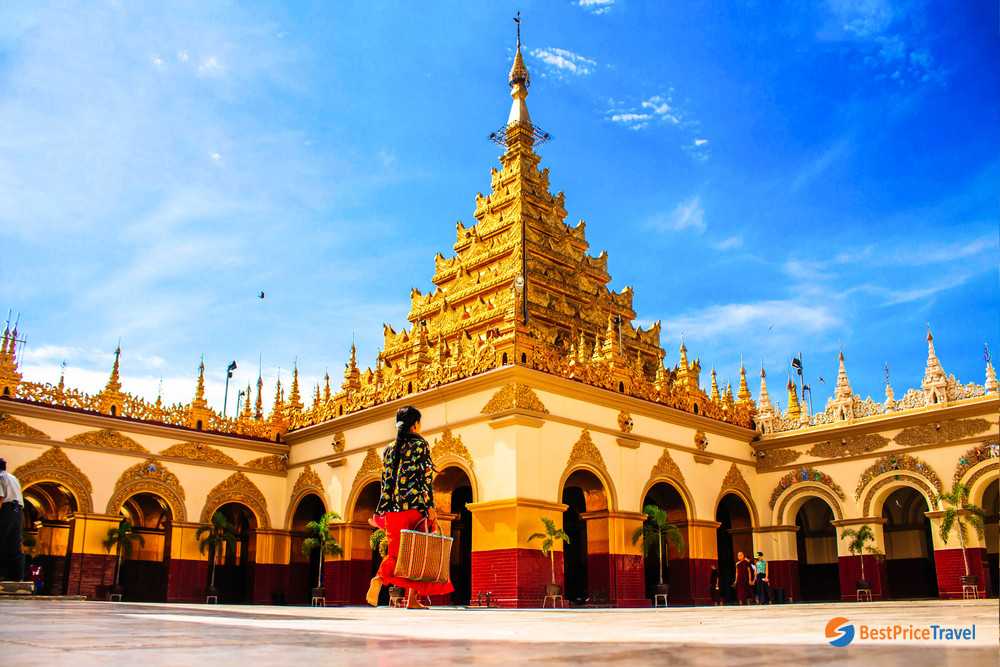 The stunning view of Mahamuni Pagoda

In the main hall stands a 3.8m high Buddha statue with 6.5 tons of bronze, decorated with precious stones that only men can approach and cast gold on statues. Devout Buddhists and visiting pilgrims continue to cover the Mahamuni statue with layers of overlapping gold leaves, which is a very interesting experience that tourists can try out. It is estimated that the thickness of gold leaf layer is laminated up to 15cm. Mahamuni Buddha temple also houses six bronze statues from the Khmer kingdom, including the mighty lions, two male warriors and a three-headed Erawan elephant. It is rumored that all illnesses will be cured if the pilgrim touches a corresponding area on the bronze statue. 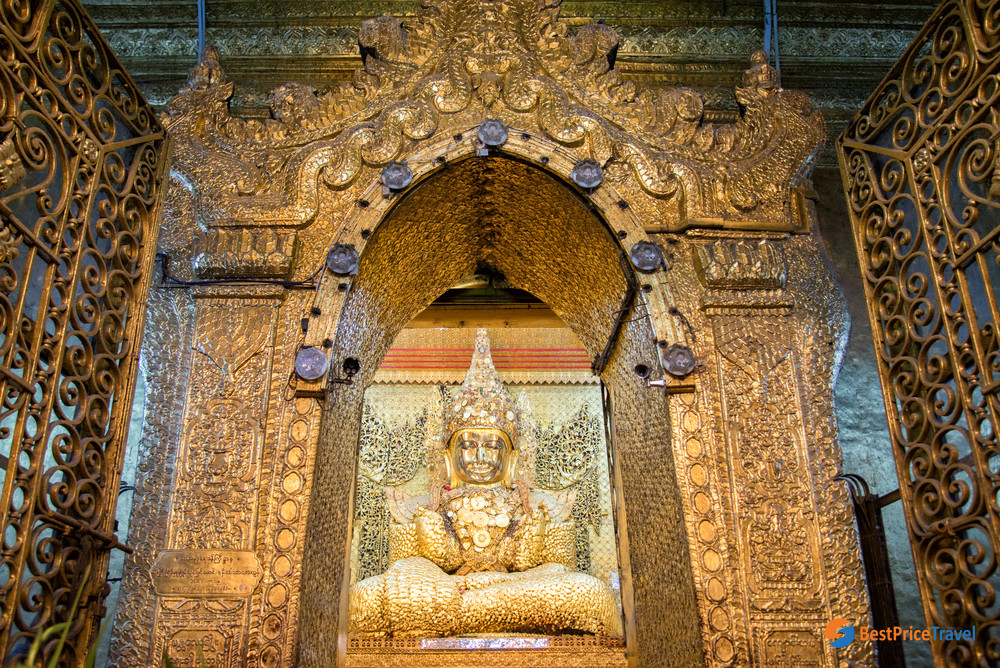 Visiting the Mahamuni Pagoda, tourists will have the opportunity to capture sparkling photos of the shiny, magnificent and skillfully sculpted statues as well as witnessing many fascinating traditions. Besides praying and worshiping, there are also other rituals at Mahamuni every day, such as the brushing ritual for the statue with a brush made of Neem trees or wiping the face with perfumed water early in the morning. In addition to worshiping at the main temple, tourists can also visit some other places in the temple complex. These include a Museum of Buddha's life along with many stalls selling incense, flowers, candles... to serve visitors. There is also a small market where tourists can find the most beautiful Burmese puppets for souvenirs. 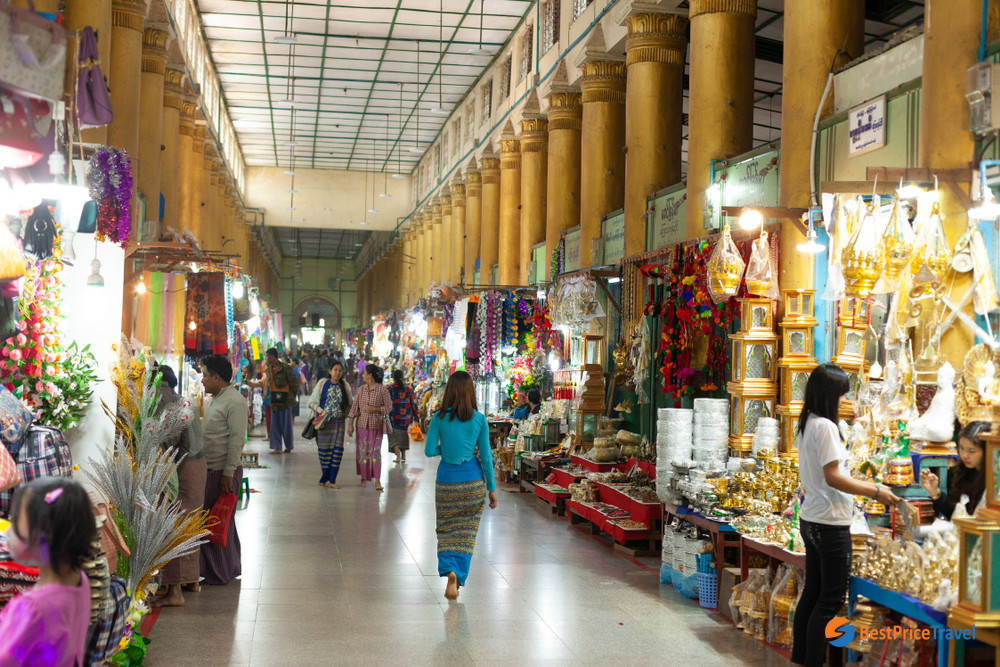 The Bazaar at Mahamuni Pagoda

There is a famous festival held at the Mahamuni Buddha Temple in early January every year to celebrate the history of the temple's formation and development. On this occasion the monks will chant sutras for many days along with many cultural, entertainment and other social events celebrated here. Visiting Mahamuni Pagoda on this occasion is an opportunity for tourists to witness Burma's cultural, spiritual activities and to capture the most vivid photos ever. 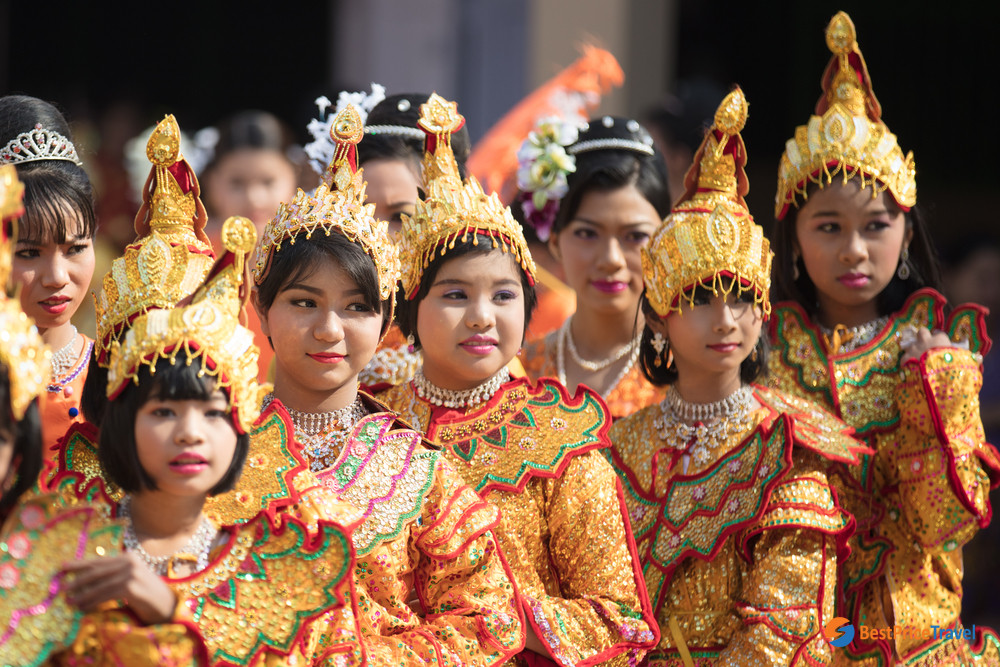 The ceremony at Mahamuni Pagoda

The pagoda is opened daily from 6 am to 8 pm. Entrance fee is 10,000 kyats (approx. US$5) per person. The most convenient way to get to Mahamuni is by taxi or rickshaw transportation.