Myanmar Guide - All you need to know

Myanmar, also known as Burma, is a Buddha-land where the spiritual temples appear more than houses and nearly 90% of the populations follow Buddhism

Myanmar gives us a feeling of peaceful strangeness with immense rice paddies, misty mountains, and gilded pagodas as in the ancient stories of Buddhism. The landscapes and cultures in Myanmar are traditional and keep specific characteristics of Southeast Asia. From snowcapped Himalayan mountaintops to vast underwater reefs teeming with abundant life, this country has remained the gorgeousness and undiscovered charm even though having opened up to tourism in recent years.

In fact, Myanmar’s history and origin development are a strong point for tourism. This is one of the most complex histories in Asia. The Mon were the first civilization to occupy Burma ago 5000 years ago. They are not original locals but migrants from nearby places such as India and China. These neighboring countries have made some key contributions to its history and later, the colonial powers like Portugal, France, and mainly the United Kingdom, have brought others.

Myanmar has been through a lot, and although the name change came under military rule, it saw an end to a one-party Socialist state and aimed to make the country more inclusive to all of its people. It also began a time of change and hope for the people of Myanmar, to have a democracy of their own and bring in an era of much-needed peace.

Burma is a bit of a reminder of its past when it needs to look forward. However, it’s a hugely complex and controversial topic, whether you call it Burma or Myanmar, we can all agree that it’s an incredible country.

Was under the rule of many countries, multi-culture and traditions could be gathered in Myanmar since it is united with over 130 ethnic groups all over the country. Although eight major national races are residing in the respective States and eight Regions, some tribal groups are scattering into sub-regions of each State and Region. Each one has its own tradition and culture and thus the diversity of cultural background has been flourishing in this land. With a variety of vibrant and thriving cultures, Myanmar could be thrilling for visitors who are interested in cultural diversities.

Buddhism is at the heart of Myanmar culture and it permeates private and public life. Most young people spend time in monastic education and they have their own rules in society, such as we do not touch them and on public transportation, they usually have their reserved places. 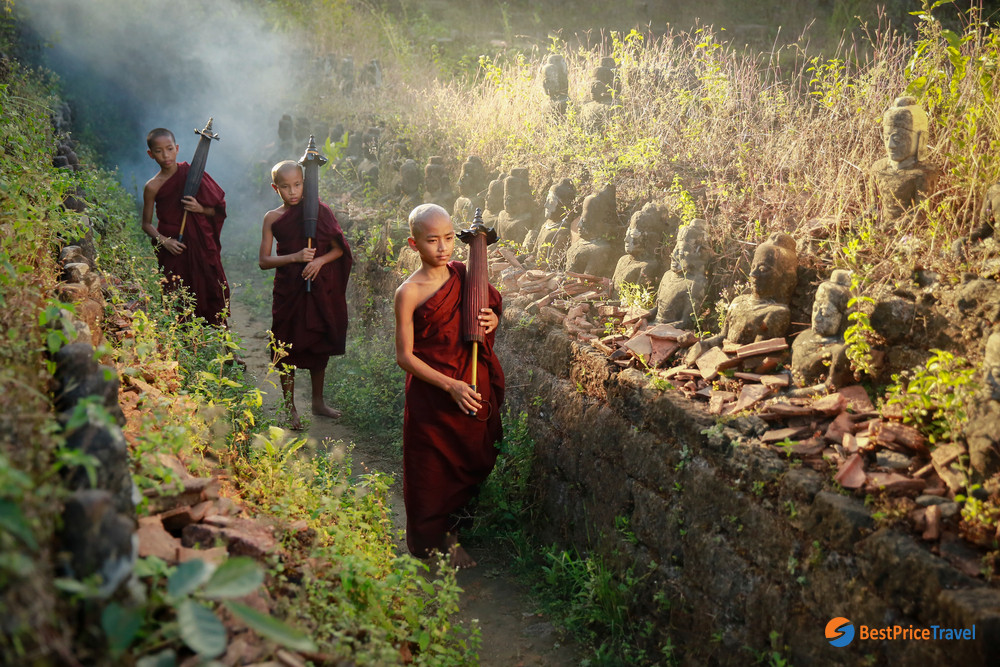 Social life is bold in a traditional eastern culture so that visitor needs to know some mistakes to avoid when walk on the street like Myanmar women should not, in general, be touched by men. If a woman wishes to shake hands, she will offer her hand first. Couples should avoid public displays of affection. And women need to dress properly (covering their knees and shoulders), a long traditional dress is possible and express their friendliness.

Myanmar is well-known as a conservative country but its own beautiful seasonal festivals celebrate and express deep gratitude to protect spirits. Festivals play a key role in the culture, customs, and social life of Burmese people, they all symbolize the vibrant life and rich culture of Myanmar. The most popular festival in this country is the Thingyan festival which is the Buddhist festival that is usually celebrated from the 13-16 of April. During this festival, everyone joins in for one big water fight symbolizing the cleansing of sins.

Myanmar has clear distinctions between seasons. The best time to travel is between October and April, blessed with lovely weather and beautiful landscapes. From May to September, typhoons ravage the coastline, and severe rainfall and heat inland make it hard to travel. Thus the concept of high and low seasons fits neatly here.

Not only does the weather define your trip but also the destinations themselves. For example, you are more likely to gain a great sunrise view over Bagan during the high season than at other times of the year; in the low season, however, you will have no access to Ngapali Beach, for flights are canceled due to heavy rainstorms. 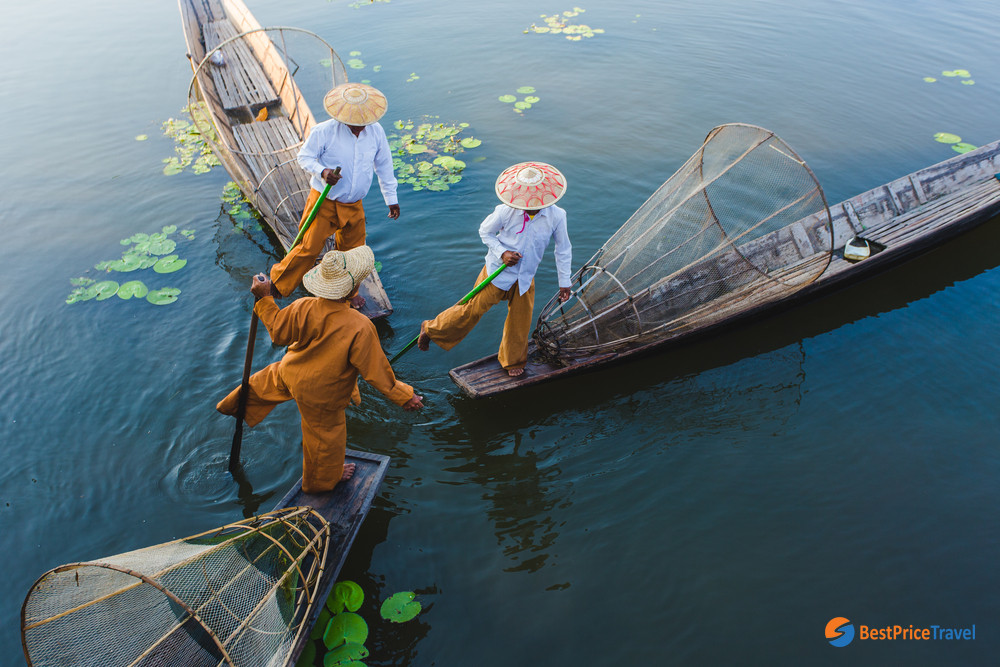 How to come to this country?

Do many people wonder that whether is safe to visit Myanmar or not? The answer is “yes” because the government has paid more attention to tourism development combined with spiritual Buddhism practice has ensured that this country is pretty safe for tourists. In recent years, violence or petty crime hasn’t appeared and affected foreigners. The politics are stable and one concern is public transportation, road infrastructure is quite poor.

Money – of course: In fact, Myanmar is no longer a cheap destination, the cost of the trip might fall into accommodation and transportation. Food is most affordable – around $1- $2 for a dish and tipping is not common practice here.

Clothes:  Depend on your season you travel. If you come between June mid- October, it’s the rainy season, and light and breathable clothes are possible, one must-have item is a waterproof coat. With the sunny season, a jacket is obviously necessary for day and windy nights as well. As mentioned above, do not bring a short dress or improper clothes in your luggage.

Internet data is the best way to travel easier. You can buy a local sim card at all the convenient shops and then buy some internet data for searching any information during the trip. In main cities like Yangon and Mandalay, the connections are faster and consistent than in other rural areas such as Bagan or Inle Lake. 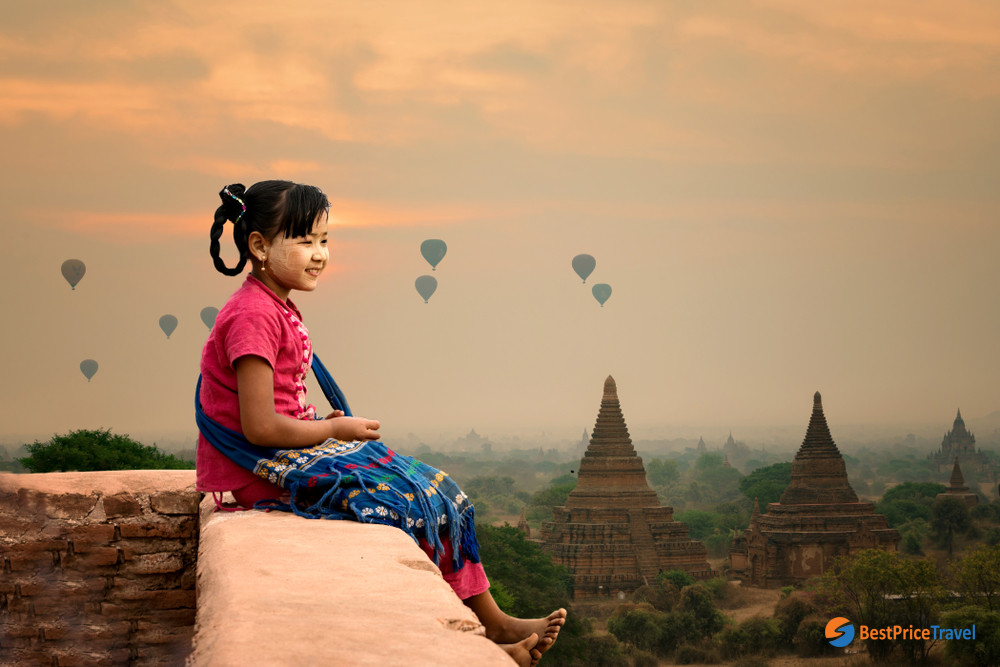 Myanmar's Government encourages tourism development so that's why Dollars are widely used in some places but local people prefer visitors using the local currency - kyat - rather than US dollars. And of course, paying by kyat is likely to be cheaper because the USD exchange rate casual - 1 USD is approximately 1300 kyats to 1,500 kyats. You need to follow the currency rate to change for saving a little bit of money for another thing.

In addition, Dollars are highly preferred paying for your accommodation, flights, or high-class services. Everything else from food, street food, bus transportation, or shopping at the market are paid for kyat.

In recent years, some ATMs in Myanmar are able to take international cards, which means travelers no longer have to carry a lot of dollars in cash along with them. You can exchange to kyat in a local bank such as Hsipaw and Mrauk U.KBZ or CB Bank which are accepted both Visa and Mastercard with a charge fee of 5000 kyats (around $4) per transaction. Otherwise, you can pay by credit cards but just accepted mostly in high-end hotels or some places in Yangon and Mandalay city centers as well as in Nyaung U in Bagan.

One thing more does not exchange your money on the street who try to lure you with higher rates or giving you small change and you have to count many times for exact money you want to exchange.

Top Myanmar Destinations - Where to go?

Top places to visit in Myanmar