The Shwenandaw Kyaung Temple, or Shwe-Kyaung-pyi, is the most significant of Mandalay’s historic buildings, due to the fact that it is the sole remaining structure of the former wooden Royal Palace that was built by King Mindon in the mid-19th century.

Located near Road 14, Mandalay, Shwenandaw Monastery is the most important historical building in Mandalay since this is considered the only surviving golden monastery of the royal palace. In addition to the name Shwenandaw Monastery, it is also known by its former name, Golden Palace Monastery.

Shwenandaw is a great symbol of the 19th century teak architecture and is also an important masterpiece of complex wood carving art from the Buddhist mythology. Built as part of the Amarapura royal palace by King Mindon’ s artisans, this royal house was wrapped in gold-encrusted leaves and glass but removed in 1857 and transported to palaces in Mandalay. When the King’s Father passed away, he was afraid of being hunted by evil spirits, so he removed it again in 1879 and reconstructed it in teak structure. Today, Shwenandaw is a monastery, but no real monk lives in this beautiful building. This place has instead become a popular attraction to tourists as well as photographers. 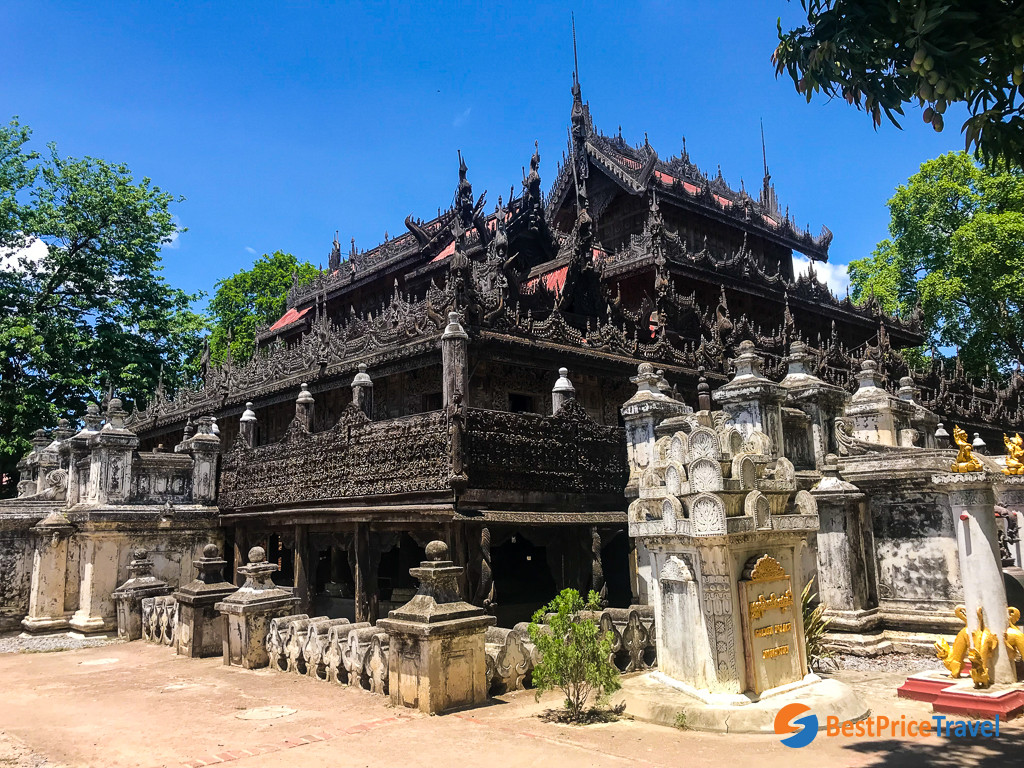 The sophisticated design of Shwenandaw Kyaung

Visitors will be satisfied with the skillfully crafted sculpture on the outside of the monastery. The engravings also portray the stories of Buddha's life. Going upstairs, tourists will see beautiful examples of ancient carvings all over the roof and outside the balcony, on the walls, ceilings and doors, just about everywhere with delicate carvings; all depict different Buddhist myths and mythical stories from the past. Because it is a monastery it does not contain a large statue of Buddha as seen in some of the great temples. 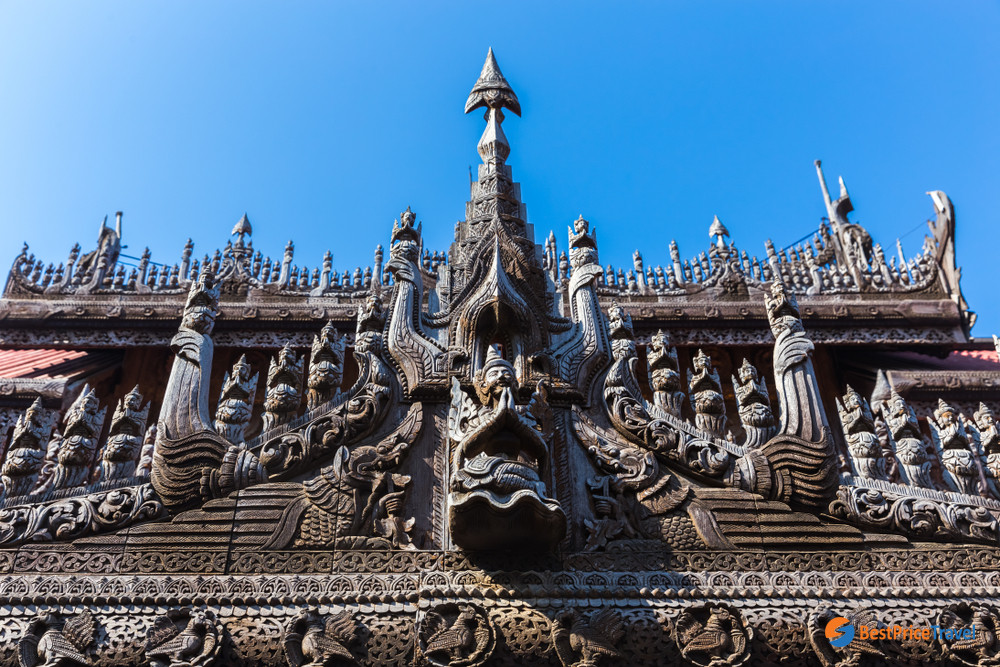 Stepping inside, you will find an area right in the middle, where there is still a small golden statue that is still beautiful to see and worth taking pictures of. In order to get to the monastery, tourists can try out rickshaw, a very interesting type of transportation that is worth experiencing in Mandalay. Journey to discover the monastery will make your trip interesting while going through the corner of Myanmar cities. It is also a valuable stop for those who want to get to know the history of Mandalay. 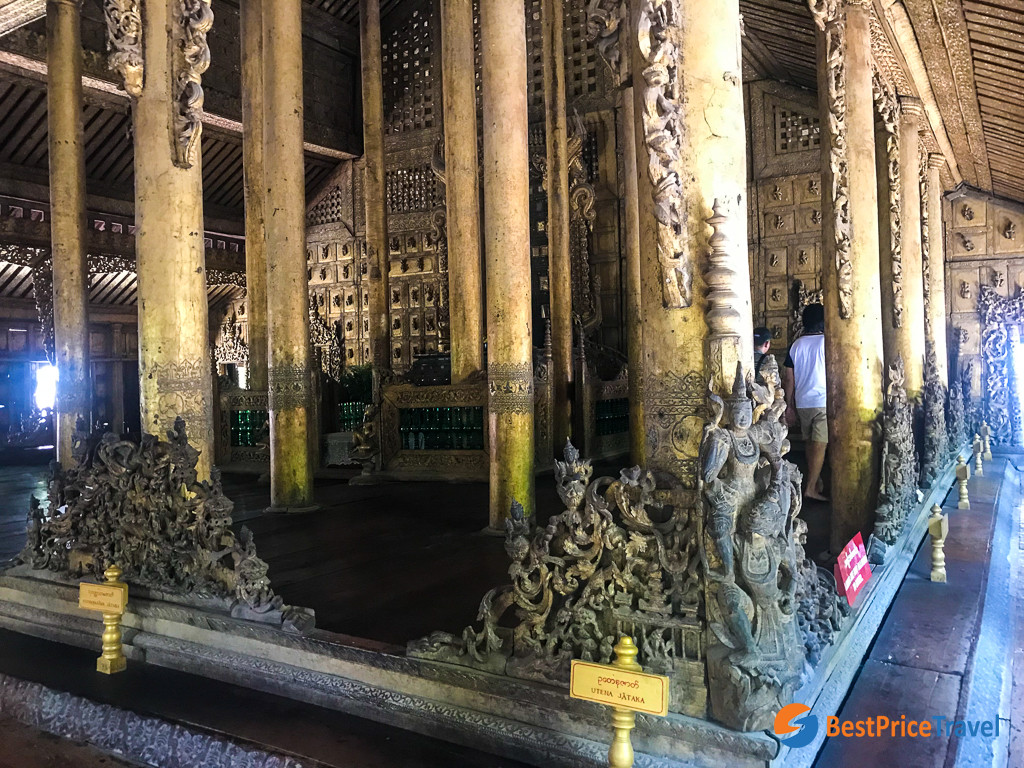 The interior of Shwenandaw Kyaung

The weather in Mandalay is relatively hot and dry but there are some cold weather periods and temperatures might drop sharply at night. The best time to visit the palace is from October to April every year.

Shwenandaw Kyaung opens daily from 8 am to 8 pm. Entrance fee is included with the Mandalay Archeologic Zone combo ticket, costing US $10. Tourists are required to dress appropriately and remove their shoes before entering the monastery. 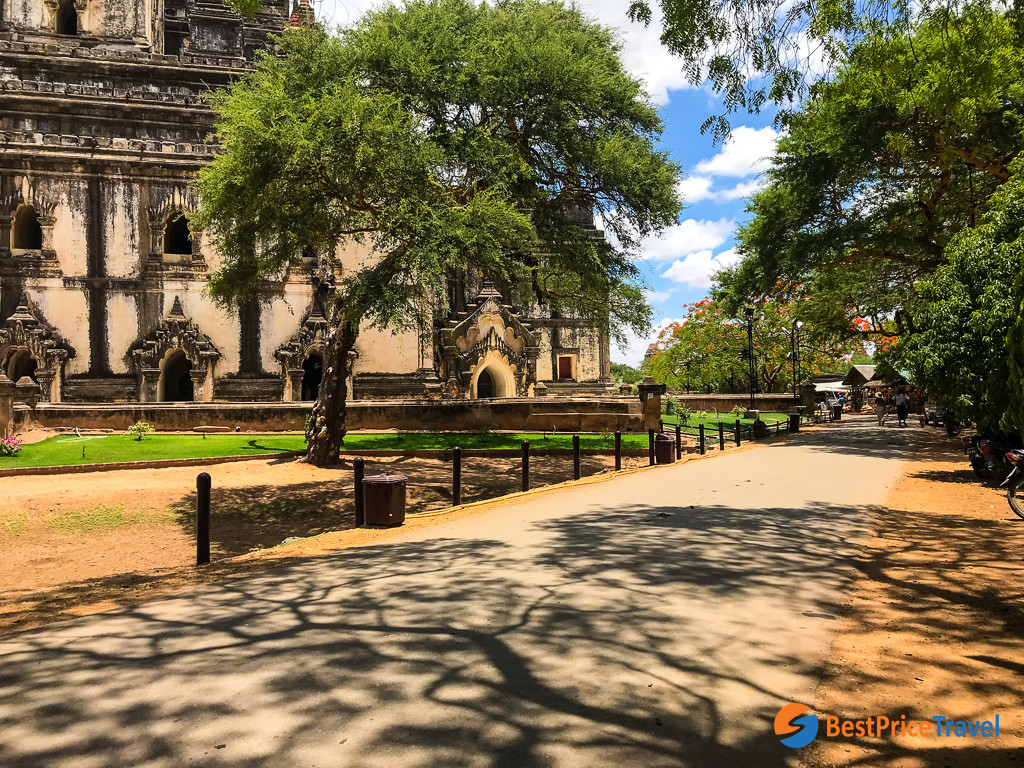 Getting around Shwenandaw Kyaung

From the centre of Mandalay, it only takes a few minutes to get to the Shwenandaw Kyaung by taxi or rickshaw. However, it is recommended to take a city tour rather than going by yourself as there are long distances in between sights if you want to cover some other famous spots in Mandalay.