Top 10 foods you must try in Thailand

Thailand cuisine attracts tourists from all over the world. If you have an opportunity to go to this country, do not forget to try the top 10 best foods here.

Thailand is not only popular for its beautiful tourist destinations but also attracts tourists by a lot of delicious foods. If you are planning to travel to Thailand but do not know what to eat, below are some suggestions. Let’s review the top 10 foods you must try in Thailand.

Tom Yum Goong is considered as one of the most famous foods that you must try in Thailand. In 2011, this dish was voted and ranked 8th in the top 50 best dishes in the world by CNN. Tom Yum is a combination of fresh seafood and spices that create different tastes for the food.

To create a special flavor for Tom Yum Goong, Thai people use many different kinds of spices, including Thai lemon leaves, lemongrass, dry onion, tamarind juice, tomato, chili, herbs, coconut milk and so on. And the most special flavor of this dish comes from “yum”, a kind of spicy and sour spice that originated from the northern mountains of Thailand.

You can find Tom Yum Goong at most restaurants or street food stalls in Thailand. The price of this food is around 100 baht. 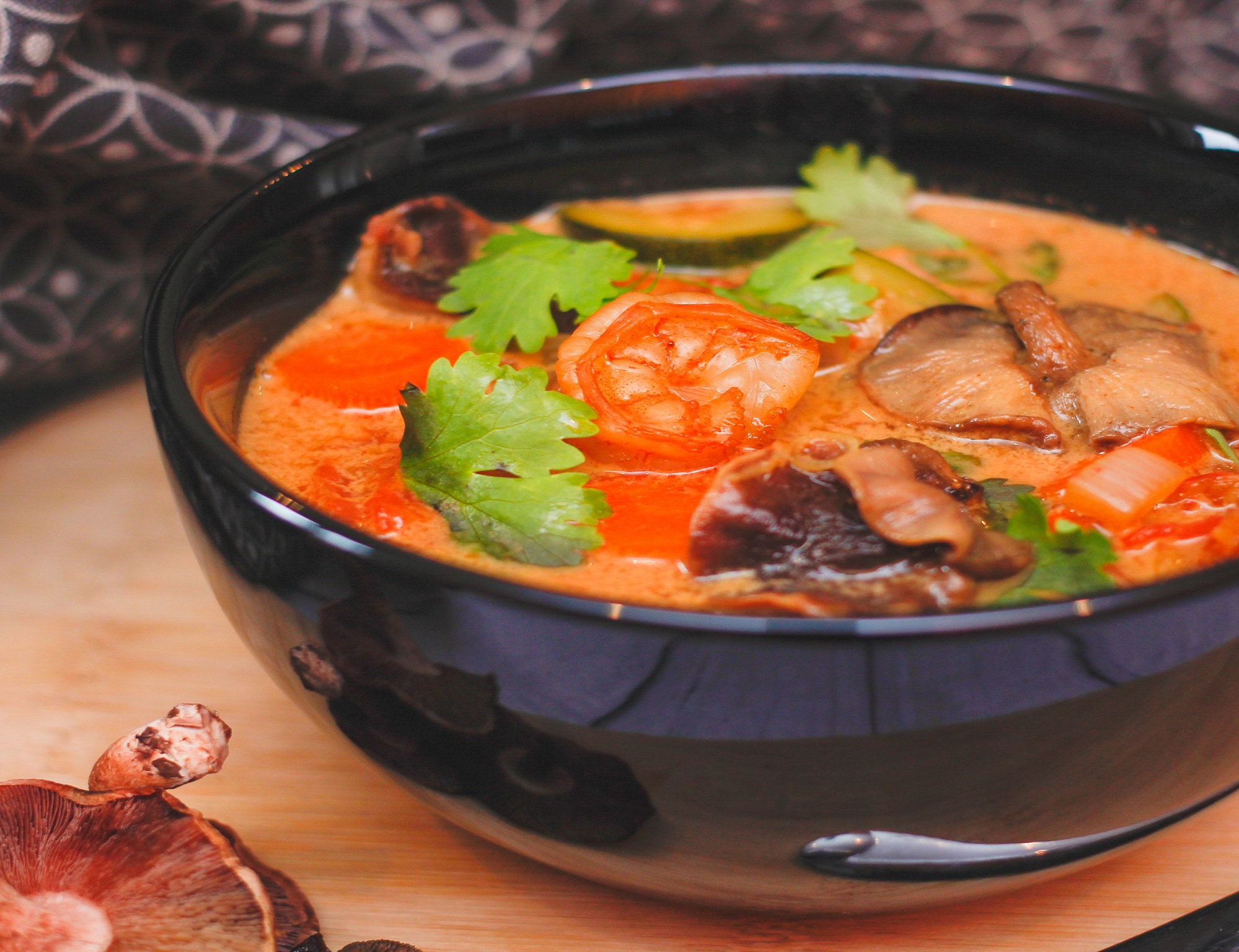 Tom Yum Goong is one of the best foods in Thailand

Kuay Toew Reua used to be sold on the boat in many Thai canals. Today, it has become one of the most popular street foods in Bangkok. This dish is a perfect combination of simple ingredients including water spinach, pig blood, sprouts, beef or pork with sour taste of lemon and spicy taste of chili.

If you have the opportunity to visit Thailand, do not forget to enjoy Kuay Toew Reua. You can choose between Boat noodle alley, Victory Monument, Bangkok to try the food. 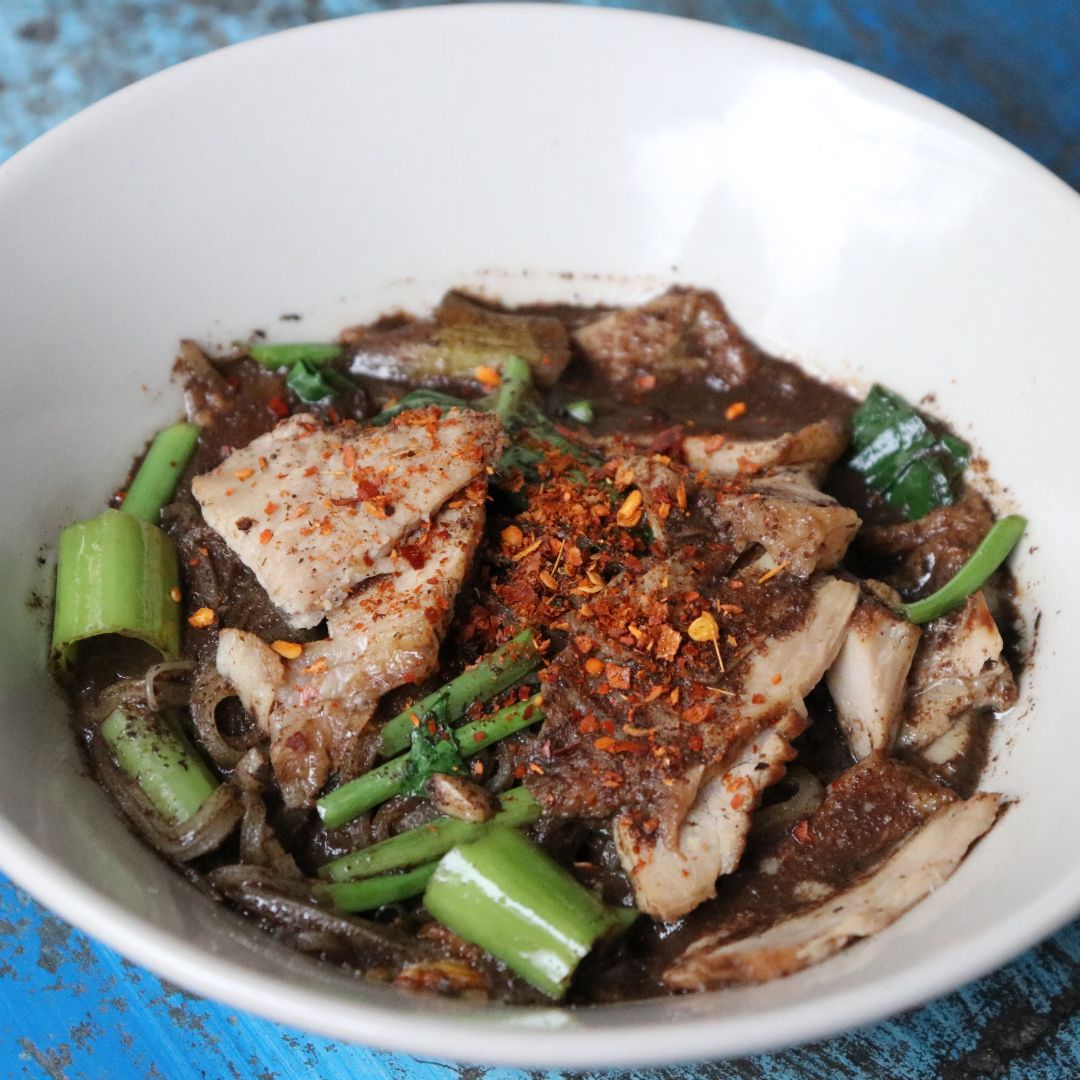 Pad Thai is a dish that is suitable to be eaten at any time of the day. It is sold everywhere in Thailand. A full plate of Pad Thai includes rice noodles, fried eggs, meat, shrimp and sprouts. It has tofu and a slice of lemon on top. Pad Thai is cooked by a simple recipe. You just need to mix all ingredients, then stir over high heat.

Pad Thai is found in both street food stalls and luxury restaurants, especially in big cities like Bangkok or Pattaya. The recipe for the dish is different in each place; however, it still attracts tourists from all over the world. Each plate of Pad Thai costs about 80 baths. 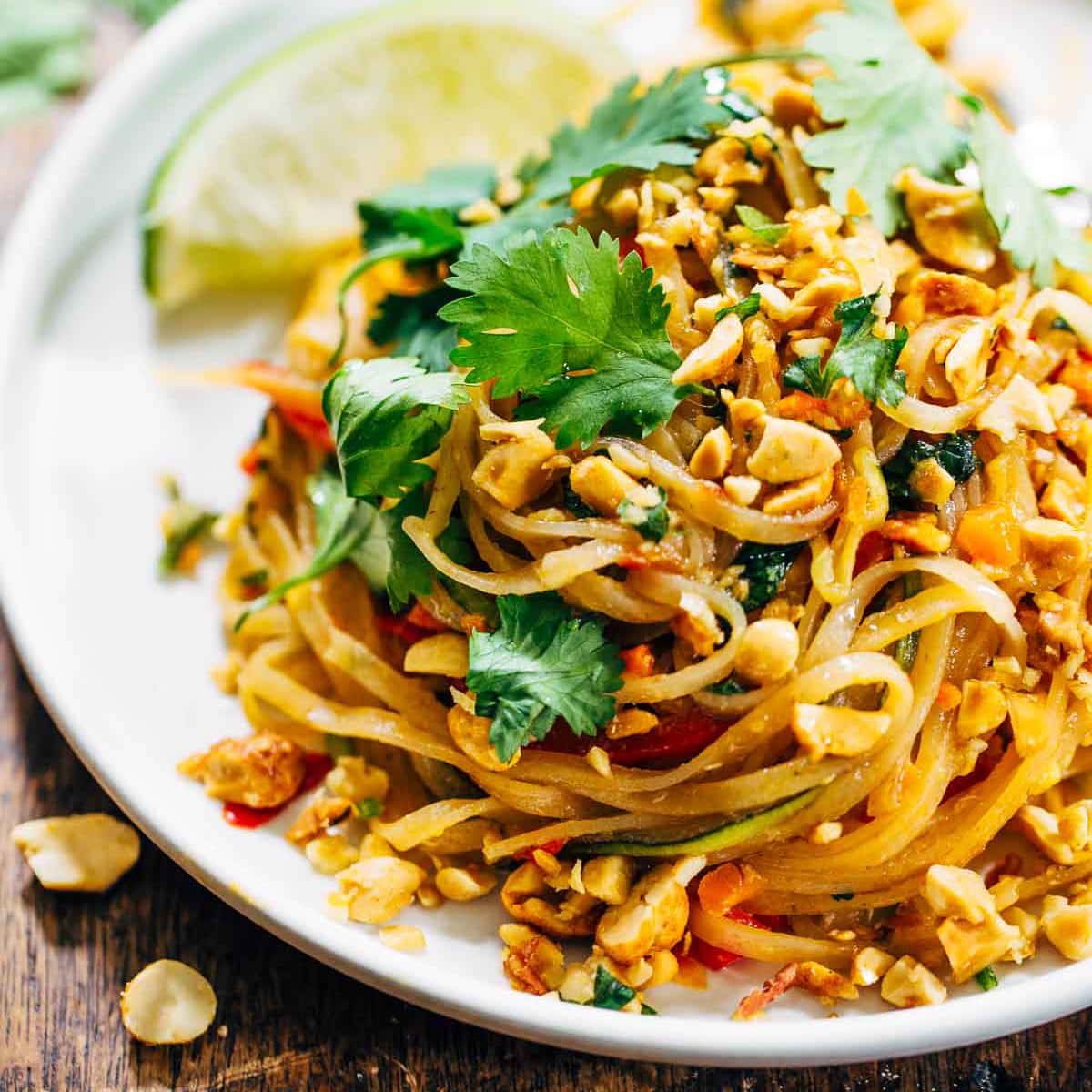 Khao Pad is a kind of fried rice in Thailand. Normally, Khao Pad is cooked with chicken, crab, meat, onions, cucumber and a few slices of tomatoes. If you would like to enjoy a special type of Khao Pad, you can order fried rice which is put in a pineapple. A delicious and full-sized Khao Pad will give you enough energy to continue your journey to explore Thailand.

In Thailand, tourists can go to the central area between Platinum Shopping Mall and Central World to enjoy Khao Pad. The restaurant opens in the evening from 6 pm to 8 pm. 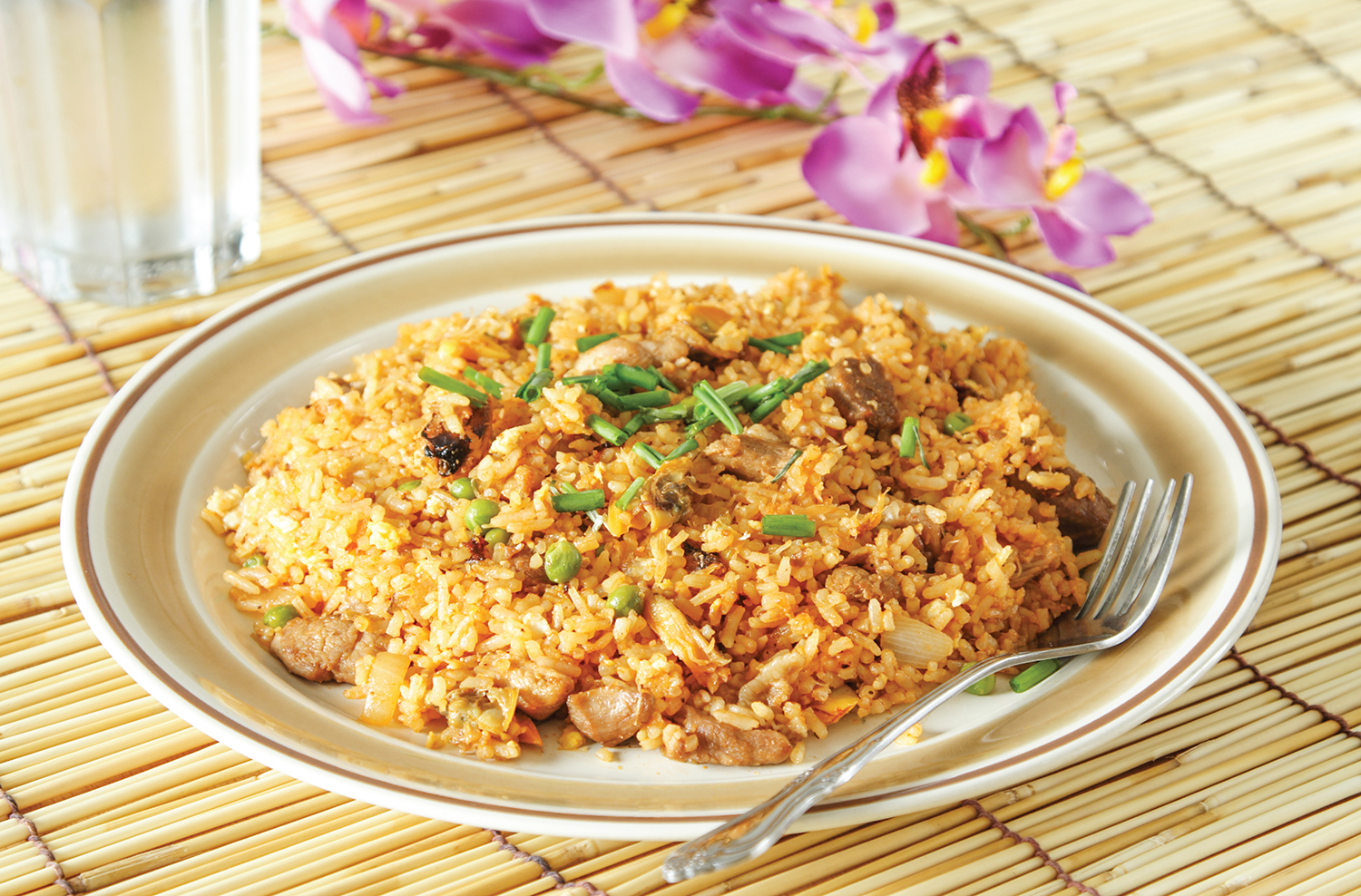 Khao Pad is one kind of fried rice in Thailand

Gaeng Keow Wan Gai is also called Green Curry with chicken. The dish is a combination of many different ingredients and spices, which creates a unique flavor. That flavor attracts a lot of tourists when coming to Thailand. 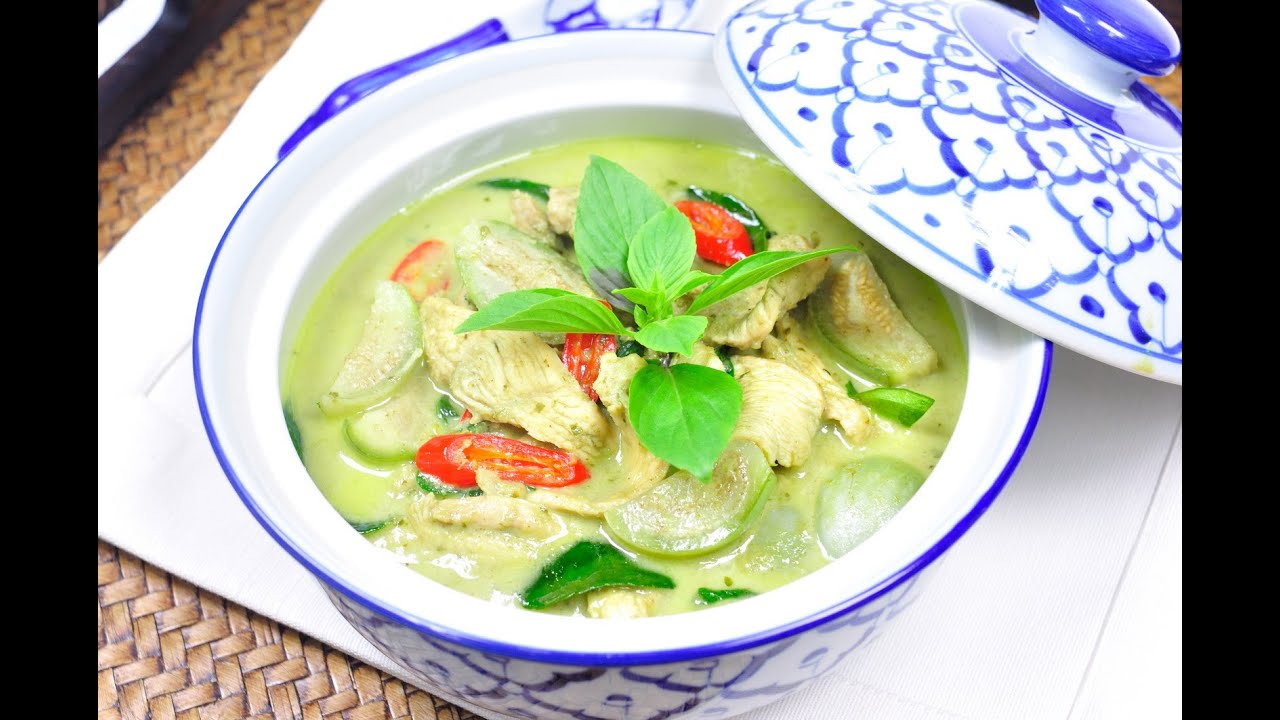 Gaeng Massaman Gai (Massaman Curry) is a typical dish of the southern region of Thailand. The outstanding recipe for this curry is a combination of cardamom and cinnamon. The main ingredients in Massaman Curry are beef, duck, tofu, chicken, pork. The sauce of Massaman Curry is really special. Its name is Nam Phrik Kaeng Massaman.

It is made from coconut water, peanuts or fried cashews, potatoes, cinnamon, sugar, fish sauce and tamarind sauce. Gaeng Massaman Gai is often served with rice and pickled ginger (achat), which is made from cucumber and vinegar. Due to the rich ingredients, Massaman Curry always looks attractive. 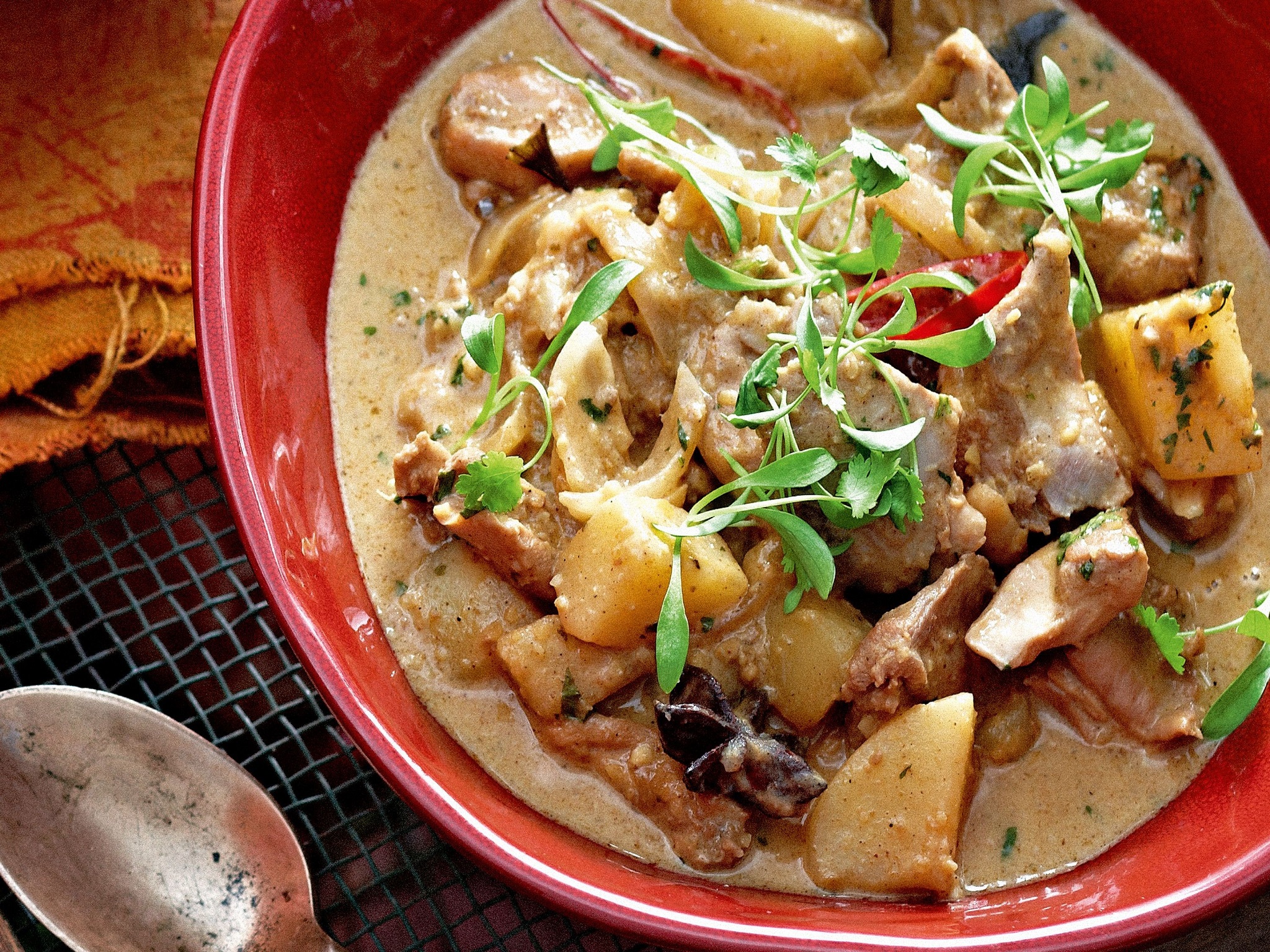 Som Tum is also known as Spicy Green Papaya Salad of Thailand. The dish appears on most streets in Thailand and is considered as one of the most popular foods here. In 2011, CNNGo chose Som Tum as one of the 50 best dishes in the world. The main ingredient of Som Tum is papaya. It is mixed with typical Thai spices such as lime, chili, fish sauce, garlic and a little sugar.

The dish is often served with dried shrimp, peanuts, tomatoes, raw cabbage or salted crabs. Thai people and tourists can eat Som Tum during their meals as a kind of vegetable. In neighboring countries like Laos or Cambodia, this dish is also quite popular. It is called Tam Mak in Laos and Bok l’hong in Cambodia. 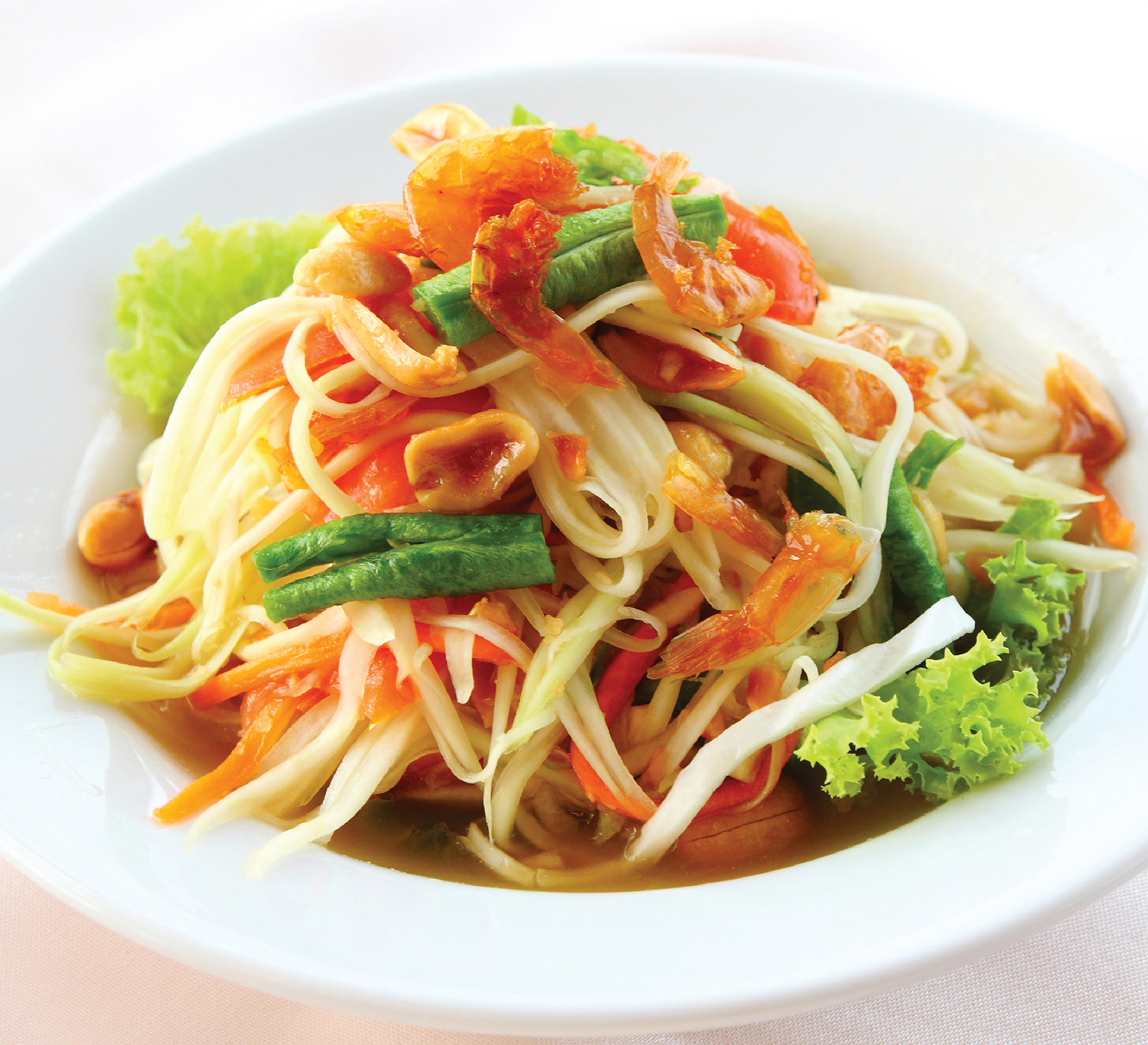 Tod Mun Pla is a kind of Thai fish cake, which is always served as an appetizer on Thai menus. However, we can make and enjoy it as one of the main dishes with rice or noodles. This is an attractive dish not only for Thai people but also for foreign tourists. Tod Mun Pla’s special flavor comes from Thai curry, lemon leaves and some other spices. 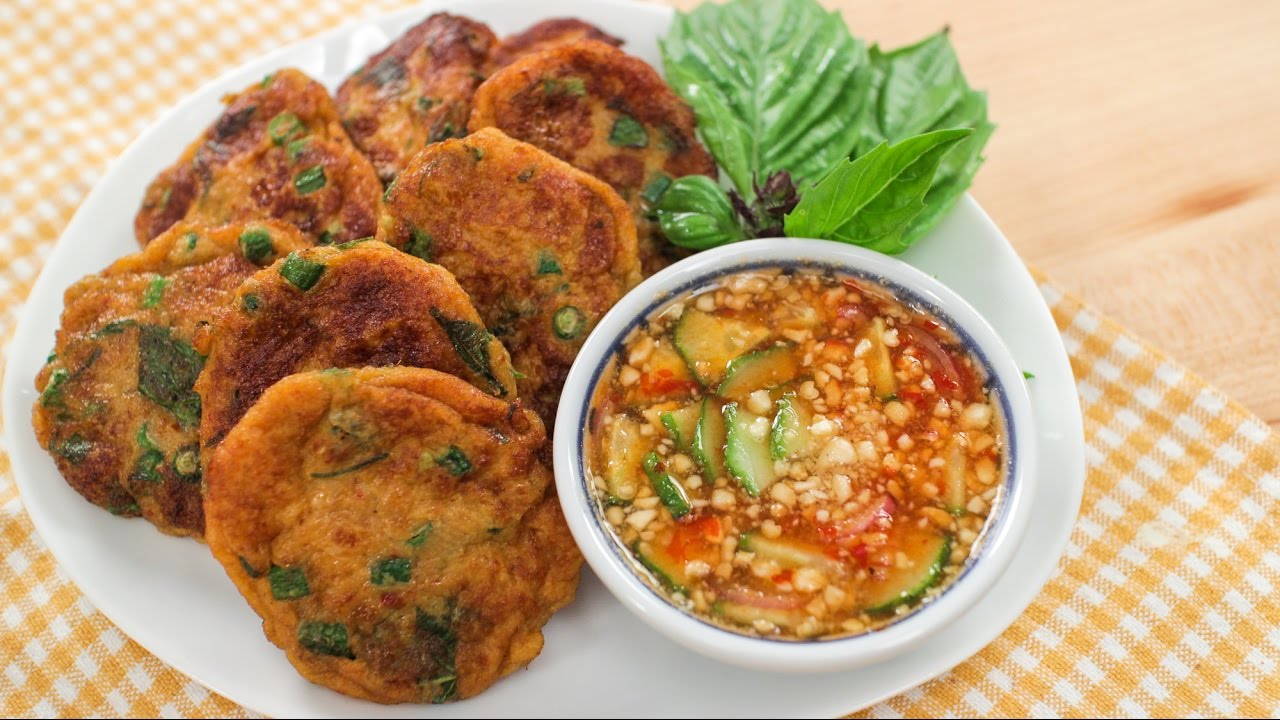 Tod Mun Pla is a kind of Thai fish cake, which is always served as an appetizer on Thai menus

Poh Pia Tod is like spring rolls of other countries. The main ingredients of this dish are pork, rice noodles, onion, carrots, cabbage and suitable spices. All the ingredients are wrapped to make a roll, then the roll will be fried until it gets golden.

Poh Pia Tod is eaten with its special sauce. People can eat this dish as an appetizer or use it for the main meals. 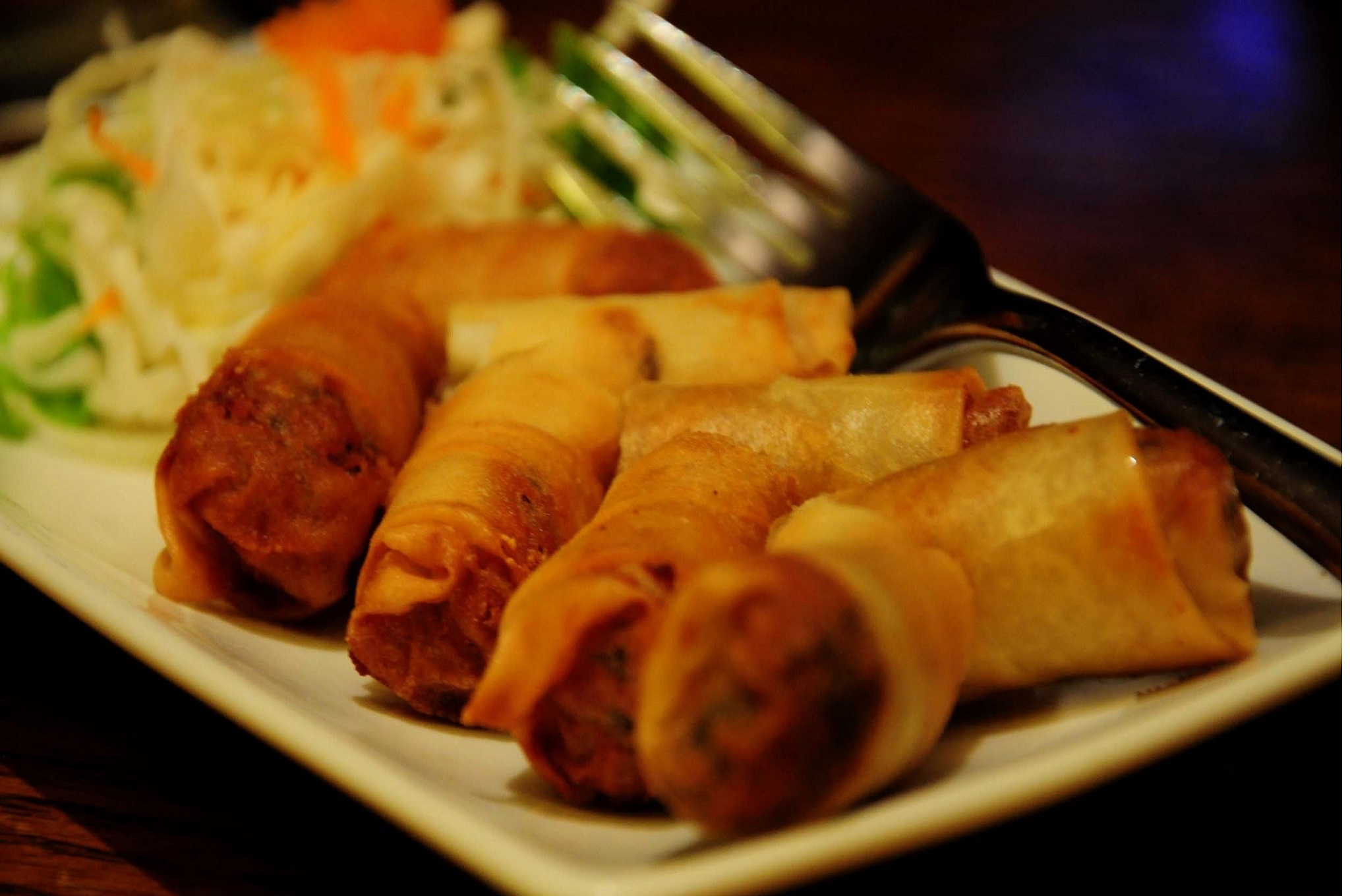 Poh Pia Tod is like spring rolls of other countries

Khao Soi is a very popular chicken or pork curry noodles in Northern Thailand. You can find Khao Soi in every stall and restaurant in Chiang Mai. The main ingredient of the dish is egg noodles. Half of the noodles are fried, and the other half is mixed with a kind of curry broth.

A traditional Khao Soi is often served with chicken or pork, onion, sour cabbage and lime leaves. Some people even like to eat Khao Soi with stew beef and Sai Ua sausage. The spicy, fatty taste of curry and the aroma of cinnamon with other herbs make Khao Soi a perfect choice for tourists when coming to Chiang Mai, Thailand. 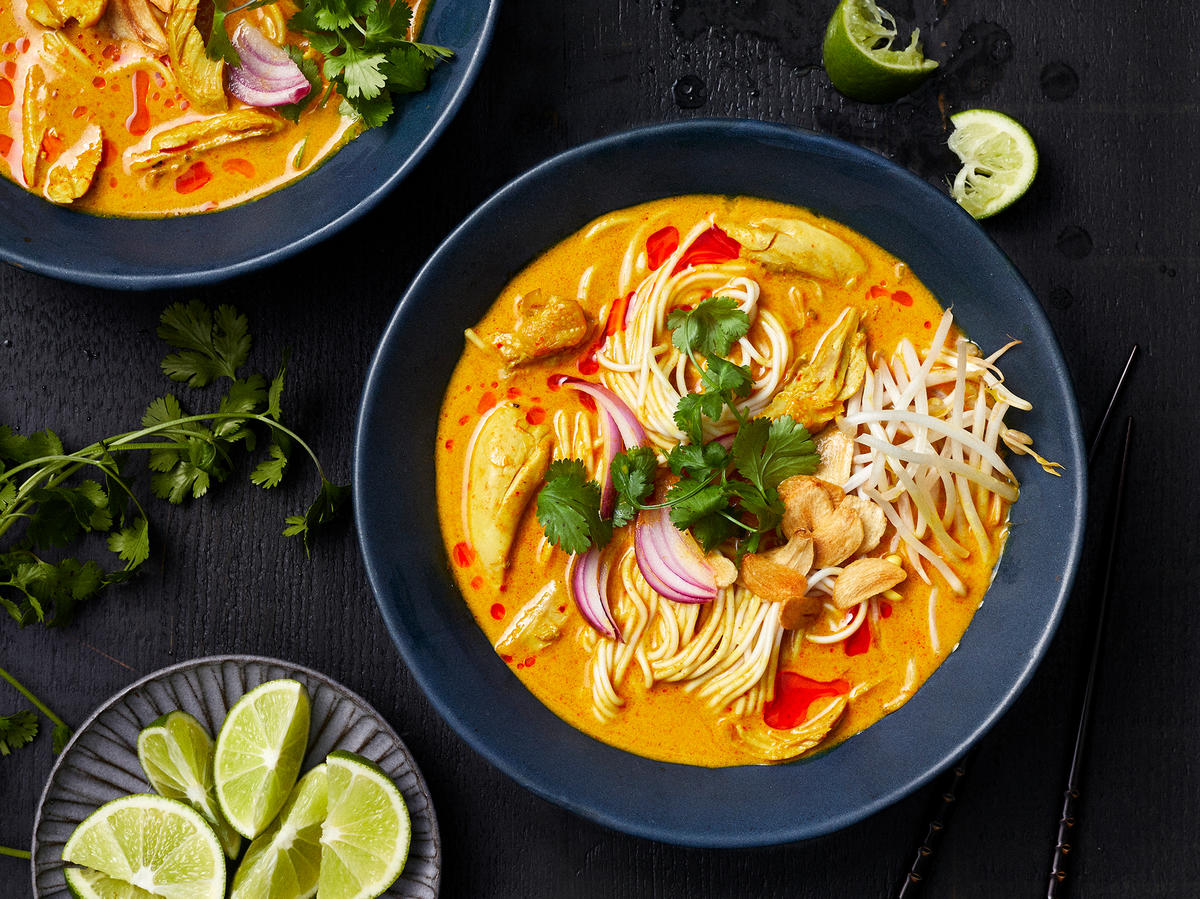 Apart from 10 must-try foods mentioned above, there are also a lot of delicious foods in Thailand that are worth trying. If you have an opportunity to travel to Thailand, do not forget to explore this country’s cuisine. 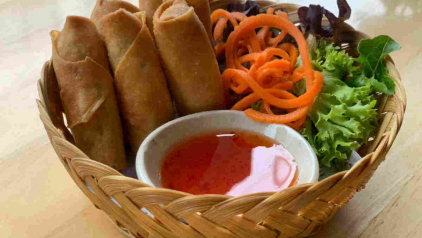 Top 5 foods you should try when going to Phuket 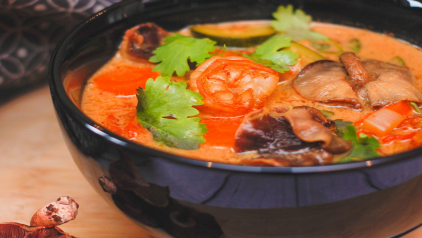 What are the top 10 foods you must try once visiting Bangkok Chinatown? 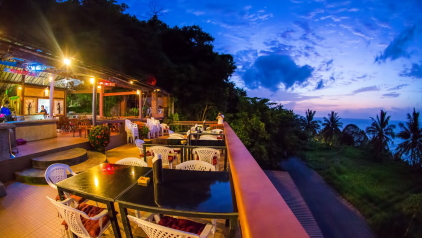