In the Dusit district of Thailand, there is a temple called Wat Benchamabophit, which has been famous for its distinctive style in architecture.

On coming to the beautiful capital of Bangkok, you should never miss seeing Wat Benchamabophit, the most beautiful temples in Thailand. Situated at no.69 Nakornpathom street, Dusit district, Wat Benchamabophit Dusitvanaram is a Buddhist temple and now a major tourist attraction in Bangkok that attracts thousands of tourists each year. 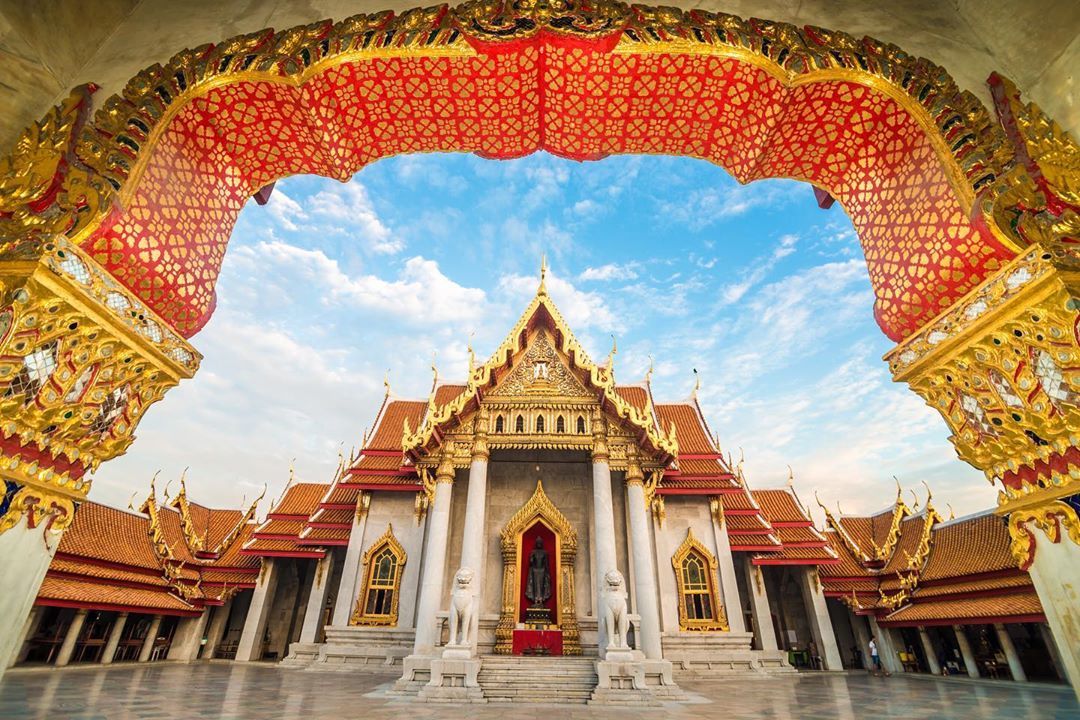 As being built in 1899, the temple itself is among the youngest in Thailand. In fact, it was King Chulalongkorn that request the temple's conduction after his palace was built nearby Therefore, Wat Benchamabophit's name literally means "the temple of the 5th king which lies next to Dusit Palace". Besides, the temple is also called the Marble Temple, due to the material that it was made of.

Among other temples in Thailand, Wat Benchamabophit stands out for its distinctive style in architecture, which was designed by Prince Naris (a half-brother of the king). With the main material of Italian marble, the wat features great elaboration and exquisiteness, thus give anyone coming here an impression of a royal place. During 9 years of conduction, Wat Benchamabophit was meticulously decorated in Bangkok's ornate style of high gables, stepped-out roofs, and elaborate finials, mixed with European and Chinese ones.

On visiting Wat Benchamabophit, you can find the temple absolutely magnificent with many interesting things that will bring you the best experience during your vacation. Generally, Wat Benchamabophit features various Carrara marble pillars, a marble courtyard, and two large singhas (lions) guarding the entrance to the bot. Inside, Wat Benchamabophitis decorated with crossbeams of lacquer and gold. Also, you can easily find the assembly hall that houses 52 images of Buddha. Among them, the Sukhothai-styled copper Phra Buddha Chinnarat is the most outstanding. This 700-year-old statue was found in the area of Wat Phra Si Rattana Mahathat and has the ashes of King Chulalongkorn buried underneath. Besides, there are other statues, each of which shows different signs and together assemble a collection from various periods of history such as Ayutthaya, Sukhothai, and Dvaravati. Especially, behind the hall stands the storax which was brought from India. With all the features, Wat Benchamabophit would never let you down as a place to go sightseeing and take some beautiful photos for your travel collection. 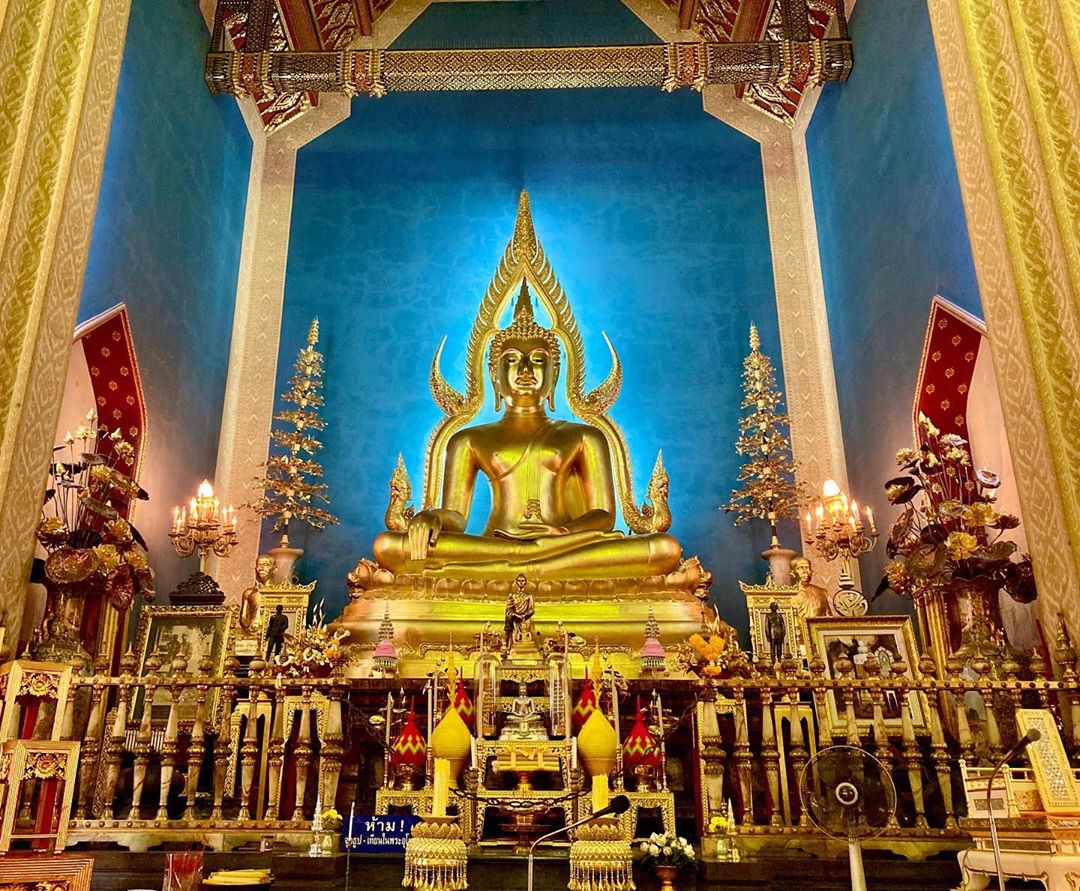 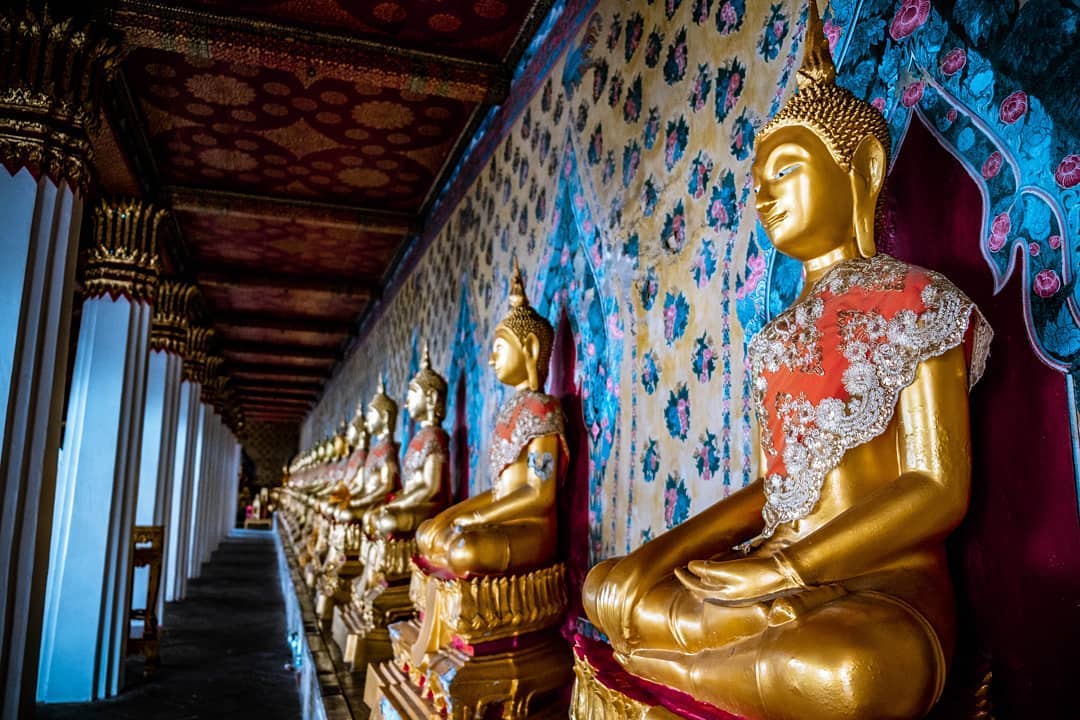 Other statues in Wat Benchamabophit

In addition, on coming here, you can experience the peaceful atmosphere plus wish for luck and happiness. Especially, if you come to Wat Benchamabophit during Thailand Buddhist festivals such as Makha Bucha (in February) or Visakha Bucha (in May), it will be a great experience for you to admire the colorful parade in the evening, under the light of a thousand candles.

Usually, Wat Benchamabophit is open for tourists to visit from 6 am to 6 pm every day during the week. With a ticket price of 50 baht (1.61 USD) per person, you can freely explore the temple and its many beautiful features.

From your place in Bangkok, several ways to get to Wat Benchamabophit are available for your choice. Some of them are traveling by bus, hopping on a taxi, or just simply driving on your own, etc.

If you are planning to pay a short visit to Wat Benchamabophit in the upcoming time, please stick to the following information, as it can help.

As the most beautiful temples in Bangkok with its distinctive style in architecture and the long-standing history, Wat Benchamabophit could be an ideal place for you to pay a short visit and explore more about the country. Now pack your bag and join us in the Wat Benchamabophit tour.