Set on the banks of the Chao Phraya River, Wat Pho is regarded as a place that every tourist should visit. Wat Pho, known as the Temple of the Reclining Buddha, is right behind the Temple of the Emerald Buddha.

Set on the banks of the Chao Phraya River, Wat Pho is regarded as a place that every tourist should visit. Wat Pho is right behind the Temple of the Emerald Buddha. It is a 10-minute walk between here and the Grand Palace.

Up to now, Wat Pho has totally 3 names: Wat Pho, Wat Phra Chetun and the Temple of The Reclining Buddha. It was officially built in 1782 by the order of King Rama I after the foundation of Bangkok in the Ko Rattanakosin area. Initially, the building was built on the site of an older one, Ayutthaya era temple called Watt Photharam. Then, the currently complex temple was renovated and enlarged during the reign of King Rama III for over 16 years. The large Chiness statues around the 16 entrances were once used as ballast aboard the Chinese junk boats. Locals came here for studying and practicing traditional medicine and traditional Thai massage because it was one of the first public universities in Thailand. 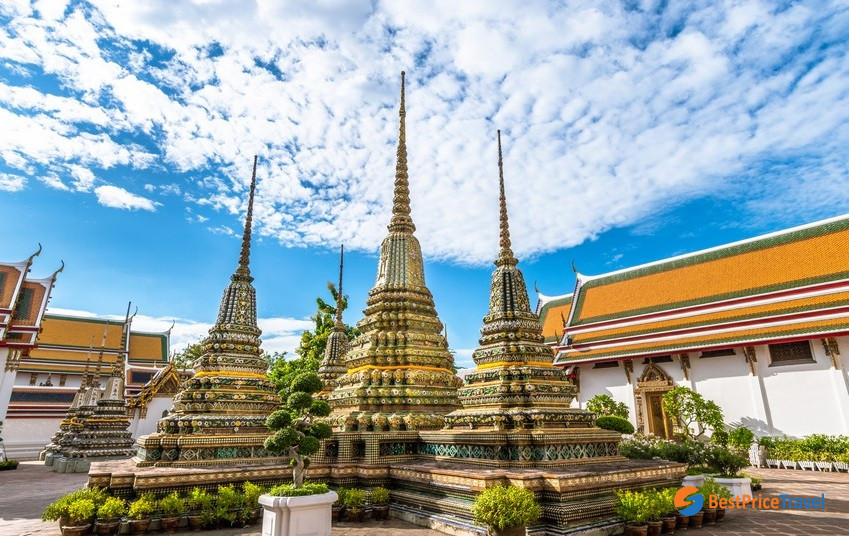 One of the most noteworthy things used to be found on the temple grounds is the Reclining Buddha, which was built in 1848. It has been the largest Buddha in Thailand up to the present. Beside the golden structures, Buddha images and marble interiors, the temple is home to a Bodhi tree which is believed as a descendant of the original Boddhi tree where Buddha had his enlightenment. The walls surroundings have the relief of being made out of marble stone cuttings that shows the scenes from the epic Ramakien. There is an entire story about these relieves and how the images were copied, originally by the temple monks and then sold to the tourists.

Things to do in Wat Pho

Most visitors choose to come to Wat Pho specially to see the 48.5 meter - long statues that has been found within the Pra Vihara of the Reclining Buddha. This can be considered as one of the unique attractions in Bangkok and is a persuasive reason for travelers to visit Wat Pho. First thing that most of the visitor do when entering the Hall is seeing the Reclining Buddha. There are many stops for you to take great photographs with the giant figure. Make sure that you have a look at the mother - of - pearl designs which has been found in the base of the Buddha's feet. These masterpieces are really impressive if you can take your eyes off the Reclining Buddha once in a while. 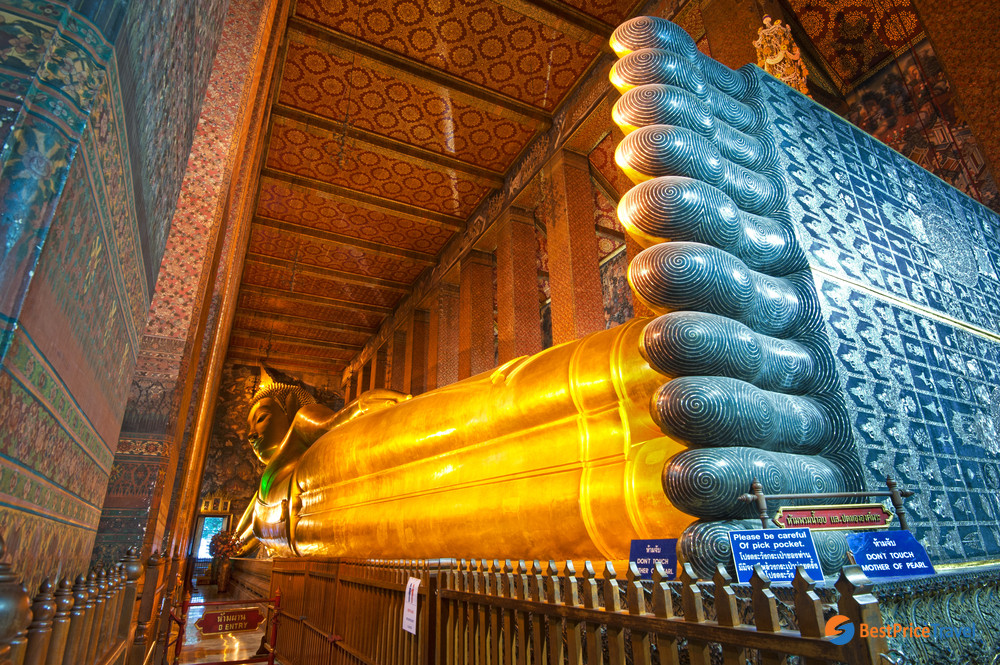 After that, visitors can enjoy seeing Phra Ubosot - a large assembly Hall that is covered by 4 smaller ones called viharas. These viharas are simply designed and decorated. However, Phra Ubosot is pretty nice to see because of its decoration. In particularly, the wall murals are memorable. The courtyard outside Phra Ubosot is enclosed by the cloister lined with more than 150 Buddha images. They are logically arranged in a lovely manner and from great photographs. Besides, visitors can also see the series of small chedis which are positioned about the Phra Ubosot grounds. These chedis are decorative, colorful and rather photogenic. 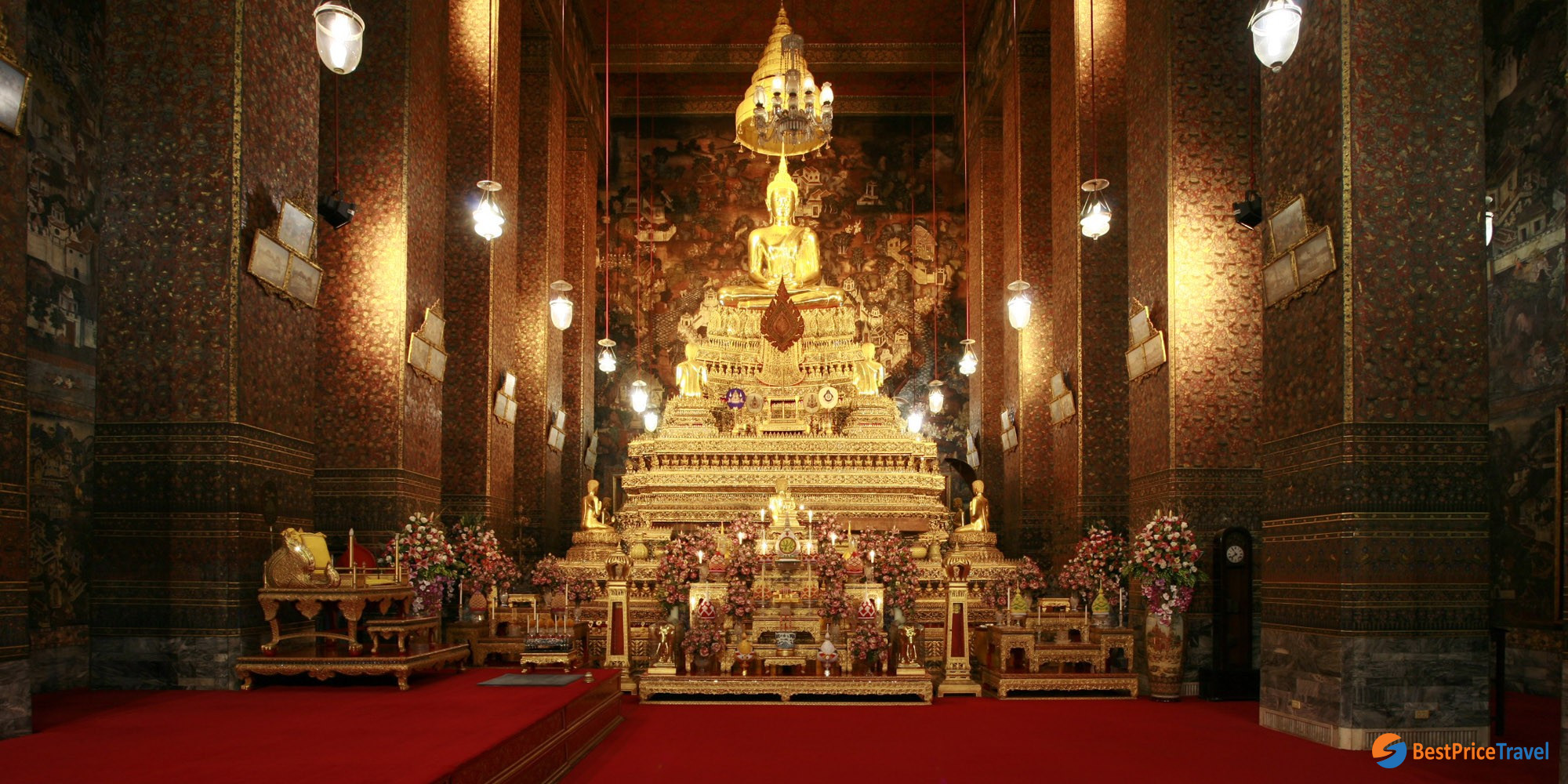 The more impressive are considered to be the four giant chedi structures that were found between Phra Ubosot and the Vihara of the Reclining Buddha. Each of them are 42 meters tall and covered with glazed tiles beautifully reflecting the sunlight for forming lovely images. A thing to do for fun is to position yourself, so you can take some pictures with these small chedis at the foreground with the large chedi ones behind them. Next, travelers can enjoy seeing the Wat Pho Giants by the same way of those seen within the Grand Palace complex, many statues that are placed outside the temple complex and the hermit statues at the small rock garden called Khao Mor. Finally, we can spend nearly 2 or 3 hours discovering all amazing things at Wat Pho. Most don't visit so long like this but you can spend this amount of time if you want to explore the temple grounds.

If you decide to make Wat Pho as your first stop, let's begin your journey at the Sathon or Central Pler. The fastest way from there to get to Wat Pho is by climbing abroad the Chao Phraya Express Boats. A 30-minute boat will ride later, disembark at Tha Tien Pier and then walk a short distance to the Temple.

Or else, as the second option, if you choose to come from Grand Palace to wat Pho, getting to Wat Pho is only 15-minute walk. First, you head towards in the right direction on Na Phra Lan Road. Turn right on to Sanam Chai Road when you meet the first intersection after that, continue to walk until you reach Tay Wang Junction. Now, you make a right onto Thai Wang Alley. Please keep on walking until you reach the Tourist Information Center and the Wat Pho is behind this building.

Moreover, if you are now at Watt Arun, getting to Wat Pho is easy and scenic! Just head towards the orange shuttle boats which are docked at the pie, then pick any of them with 3 Baht, you will be transported across the river just in some minutes. However, in case, you think this is a risk option, you can choose road travel instead but it is not particularly viable. Roads are usually crowded that will delay your trip to the Temple. 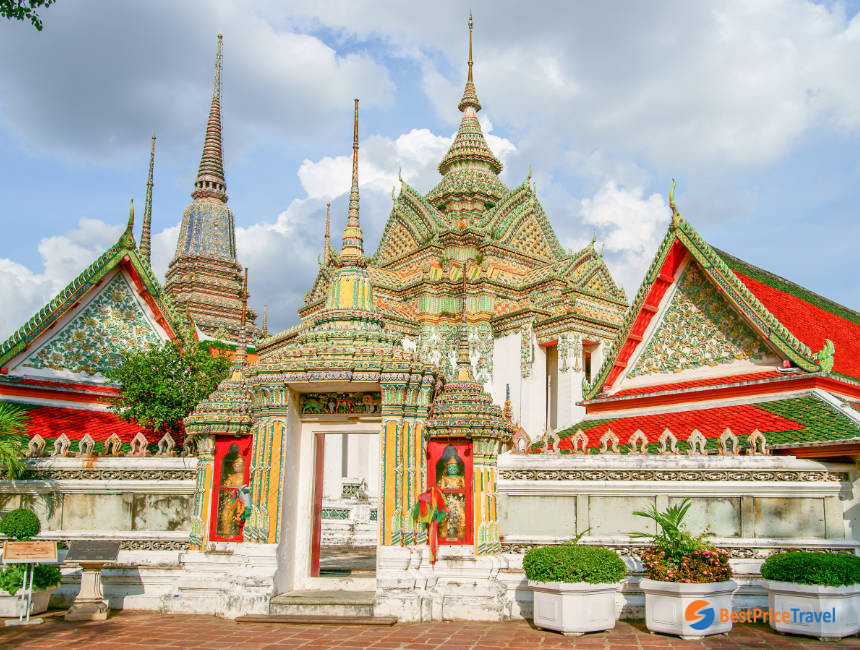 To enter this Temple, travelers must pay an entrance fee of 100 Baht (nearly 2.60 USD) at booths just inside the south or north entrances. The fee is except for children being under height of 120 cm (4 feet) with the free admission. The prices for a massage service at the temple are 250 Baht (about 6.49 USD) for 30 minutes, 400 Baht (10.39 USD) for an hour massage and a 45 - minute foot massage service.

The Wat Pho complex is opened daily from 8:00 a.m. to 6:30 p.m. As with most of tourist destinations, you can easily find that the temple is not busy too much in the morning while the afternoon tends to be crowded.