Referring to Thailand, it is impossible not to mention Wat Phra Kaew (also called The Temple of the Emerald Buddha), the religious temple well known in Southeast Asia as well as in the world. It is also considered a cultural and tourist representative of Bangkok, the capital city of Thailand.

Wat Phra Kaew is located in the heart of Bangkok within the grounds of the Royal Palace. This sacred temple is surrounded by walls more than 1 mile long to protect its sanctity, also giving tourists an overwhelming first impression. The Grand Palace as well as Wat Phra Kaew is Bangkok's most famous temple complex, characterized by the Imperial imprint and unique architecture of Buddhism in Thailand. Although there are many large and small temples inside the grounds of the palace, Wat Phra Kaew is still the most worshiped site because it houses the precious emerald Buddha image, which poses great significance to the nation and people of Thailand.

The origin of Wat Phra Kaew is another impressive aspect about the temple, reflecting the glorious history of Thailand, especially during the Chakri Dynasty. Wat Phra Kaew complex was built in 1785, when King Yodfa Chulaloke (Rama I) moved the capital from Thonburi to Bangkok. The pagoda was constructed in a central position alongside the Royal Palace to facilitate the royal court's rituals. The highlight of Wat Phra Kaew in Bangkok is the emerald jade Buddha image in the main hall. It is believed that, in 1434, at a temple in Chiang Rai, an abbot witnessed the sight of lightning striking at a stucco Buddha image. After the lightning stopped, he saw the emerald jade Buddha image slowly revealing, so sparkling and beautiful that everyone who saw it wanted to stop by to admire. 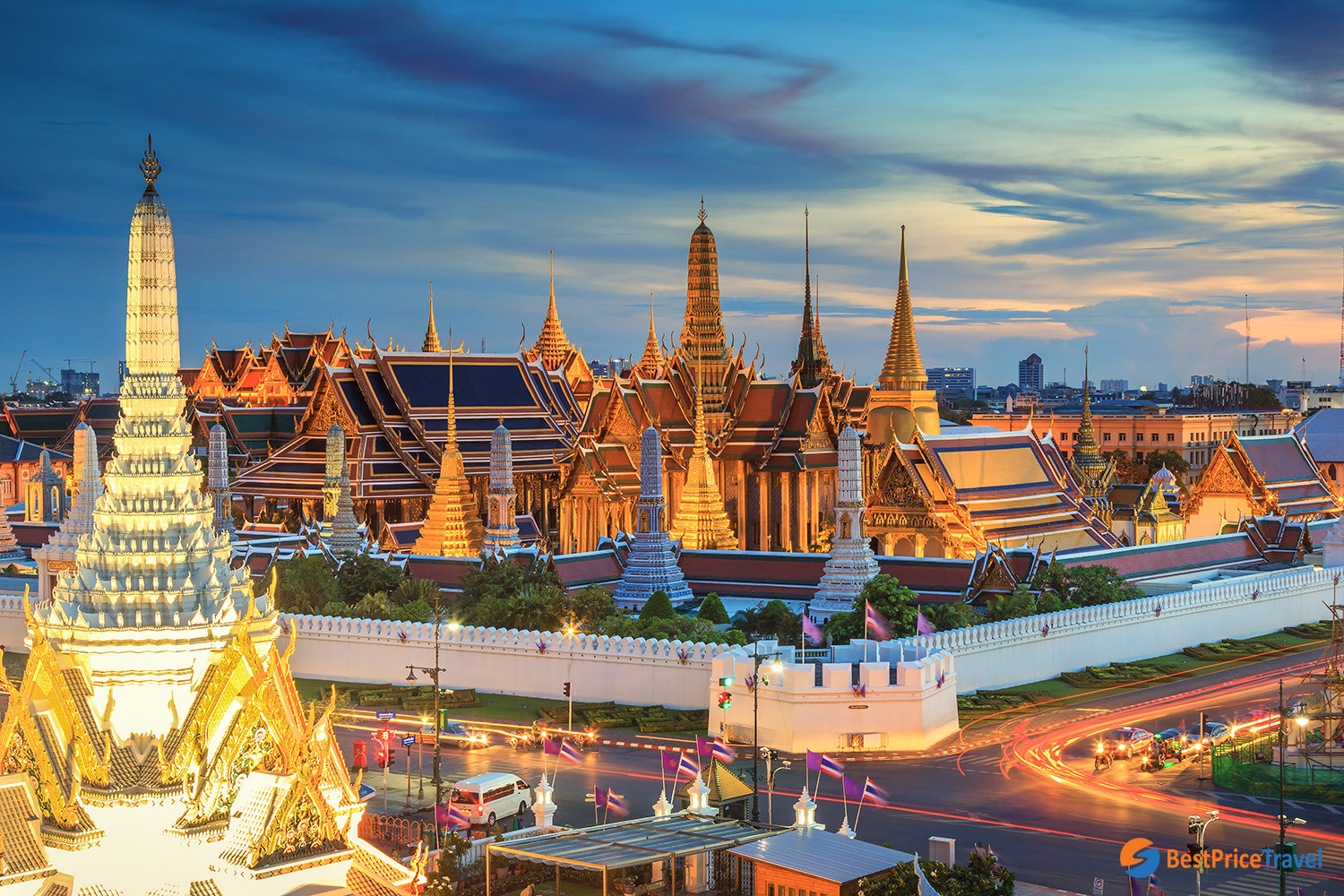 The complex of Wat Phra Kaew

Curiosity and fame spread far, leading to the mysterious disappearance of the Buddha image to Laos until the sixteenth century. The statue stayed there for 214 years, until General Chakri (later King Rama I) regained the sacred image to Thailand after his successful campaign in Laos. In 1784, when the capital was moved to Bangkok, King Rama I enshrined that precious Buddha image in the royal Wat Phra Kaew temple, becoming a tangible symbol of the Thai. If you are a follower of Buddha, surely visiting this sacred site is a very legitimate wish.

Unlike other temples, Wat Phra Kaew does not have a monastery. Instead, the temple is a unique complex of ornate buildings, Buddhist temples, statues, and towers. In fact, Wat Phra Kaew is considered one of the large-scale temples in Bangkok city. The central building is the main hall where the Emerald Jade is adorned. The Buddha image is beautifully decorated, bringing tourists a perfect sense of tranquility. Just below the Buddha, the emerald is placed on a golden altar of 11m high, surrounded by glass balls representing the sun and the moon. 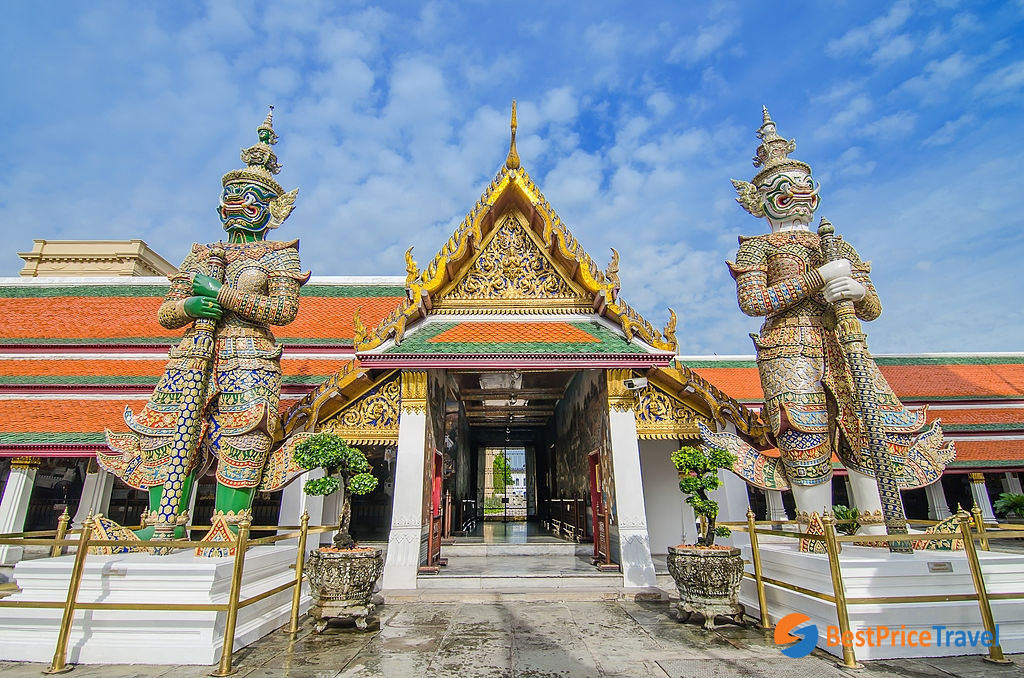 Wat Phra Kaew is home to the most sophisticated Buddhist sculptures, architectural works, paintings and handicrafts in Thailand. The surrounding porch is embellished with fantastic sculptures while the walls inside the main hall are decorated with frescoes in Ayutthaya style. Visitors are recommended to walk along the corridor to actually feel the magnificence of the temple. On the mural, there are 178 colorful paintings showcasing the mastery skills of Thai craftsmen. However, each painting implies different meanings, summarizing the life of Buddha from birth to Nirvana. 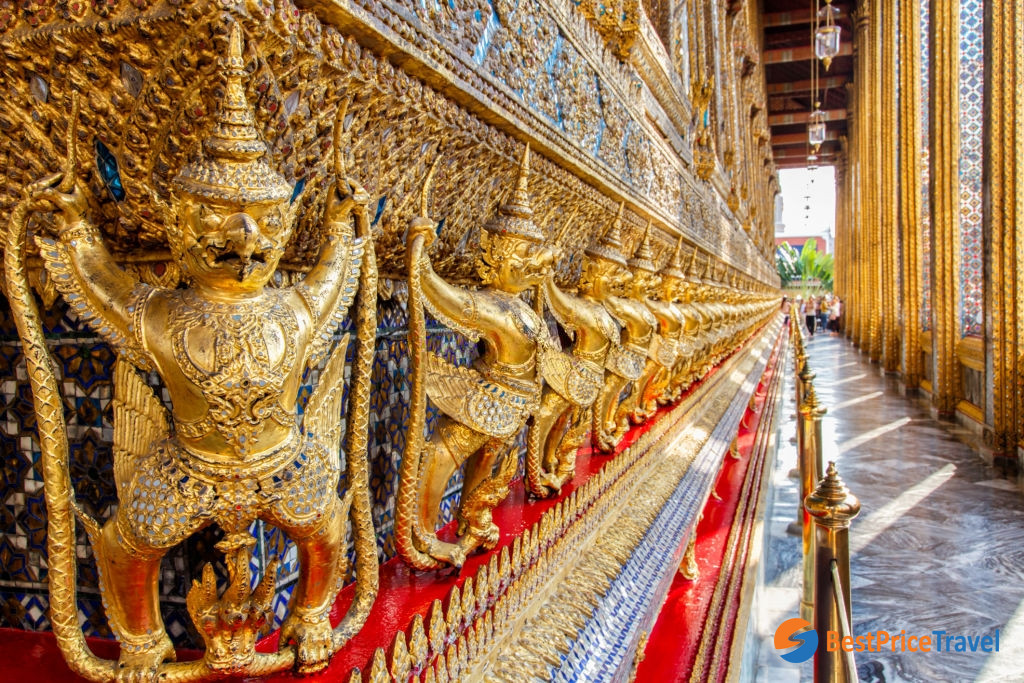 The Temple of the Emerald Buddha

Alongside the main hall, there are three prominent Buddhist temples located right in the north of the main tower. These temples portray the change in influencing centers of Buddhism in Thailand. Phra Si Ratana Chedi, in the style of Sri Lankan pagoda, is a tower located at the west of the main hall as the cradle of worshiping Buddha relics. In the middle is the Phra Mondop library, built by King Rama I where the precious Tripitaka as well as the statues of King Chakri are stored.

To the East is the Pantheon Royal Palace, built in Khmer style from the 19th century. The palace is only open to the public for one day in October to commemorate the founding of the Chakri dynasty. To the North, right next to the library is a portraying model of Angkor Wat, built under the orders of King Rama IV when Cambodia was dominated by Siam. The model was later recreated by plaster as ordered by King Rama V to commemorate the first 100 years of the palace. Scattered around the complex of Wat Phra Kaew are elephant statues, symbolizing independence and power of Thailand. Wat Phra Kaew is indeed covered by magnificent towers and small temples in every corner, promising tourists wondrous photos during your trip to Thailand. 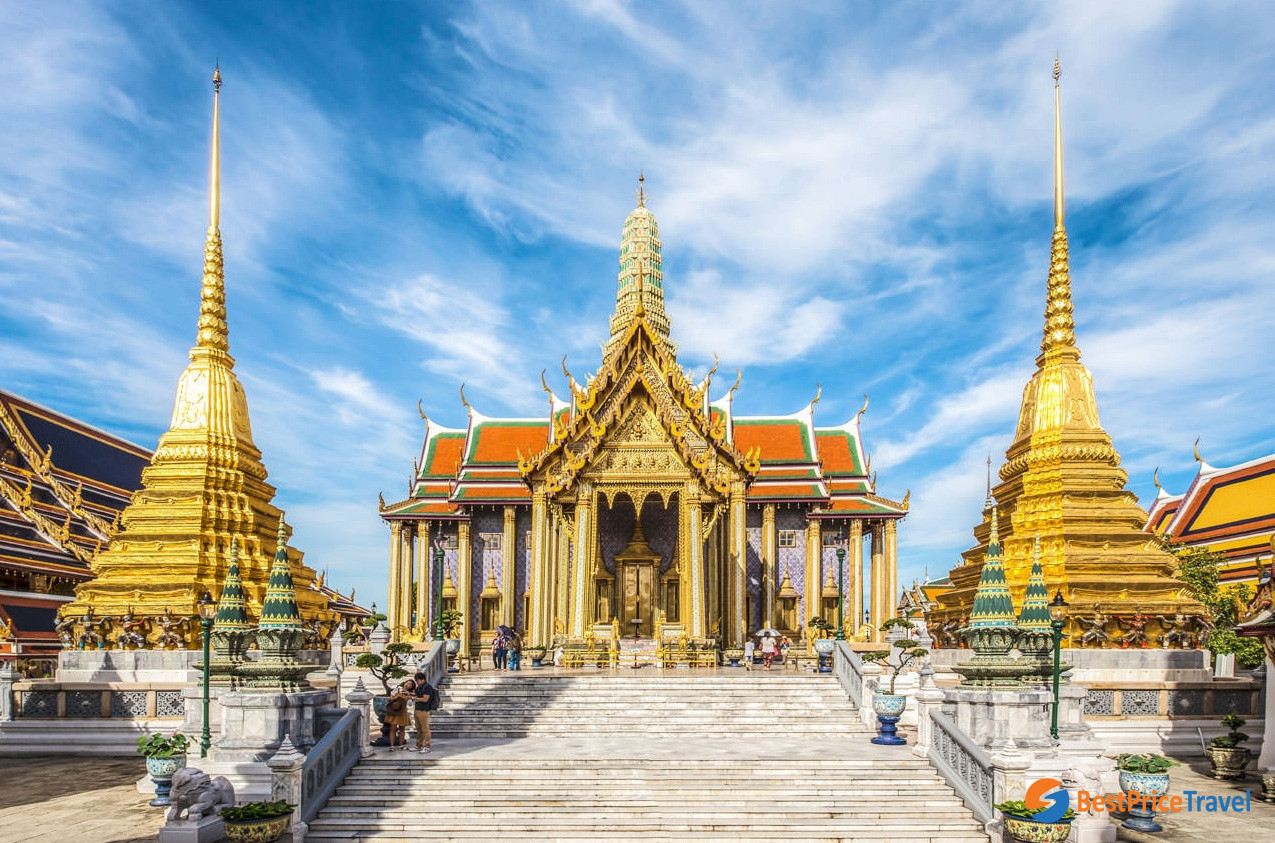 The best transportation to get to Wat Phra Kaew is by Grab or boat. From Saphan Taksin pier, tourists can get to wharf No.8 and travel across Chao Phraya River to reach the temple. Grab cars are also ideal for groups from 4 members with a very reasonable price.

Wat Phra Kaew is open daily from 08:30 to 17:30 with the entrance fee of 50 baht per person, about 1.5 USD. Local tour guides are also available in case tourists need assistance while visiting the Palace and temple complex.