Ayuthaya has a total of over 400 ancient temples and shrines, and nowadays dozens of which have been restored. The Wat Phra Si-sanpeth temple building is a remnant of the Ayutthaya palace, visited and worshipped by many tourists from around the world every year.

Ayuthaya has a total of over 400 ancient temples and shrines, and nowadays dozens of which have been restored. The Wat Phra Si-sanpeth temple building is a remnant of the Ayutthaya palace, visited and worshipped by many tourists from around the world every year. The site is located in the historical center along with temples like Wat Phra Ram, Wat Mahathat and Wat Ratchaburana forming a complex of relics of high historical value. 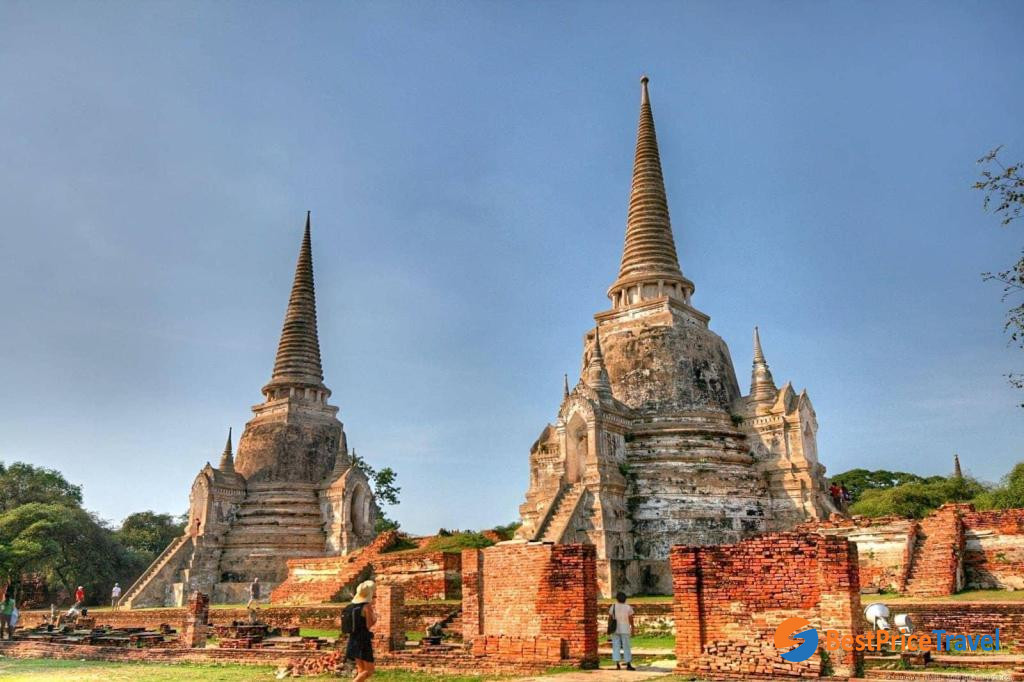 Wat Phra Sri Sanphet was built in 1448 under the order of King Borommatrailokanat. Ayuthaya Palace was originally a solemn and enclosed place with high walls, and also with the surrounding temples that created a mighty dynasty at that time. After the war between Siam and the Burmese army, everything was ruined, leaving only the remnants of what we have today. The focal point of Wat Phra Si-sanpeth is the three Sri Lankan-style tombs standing side-by-side, similar with the Jade Buddha architecture in Bangkok, Thailand. This is the place to store the ashes of the three rulers during the Ayutthaya period, namely Ramathibodi II kings, Borom Trailokkanat and Borom Rachathirat III. 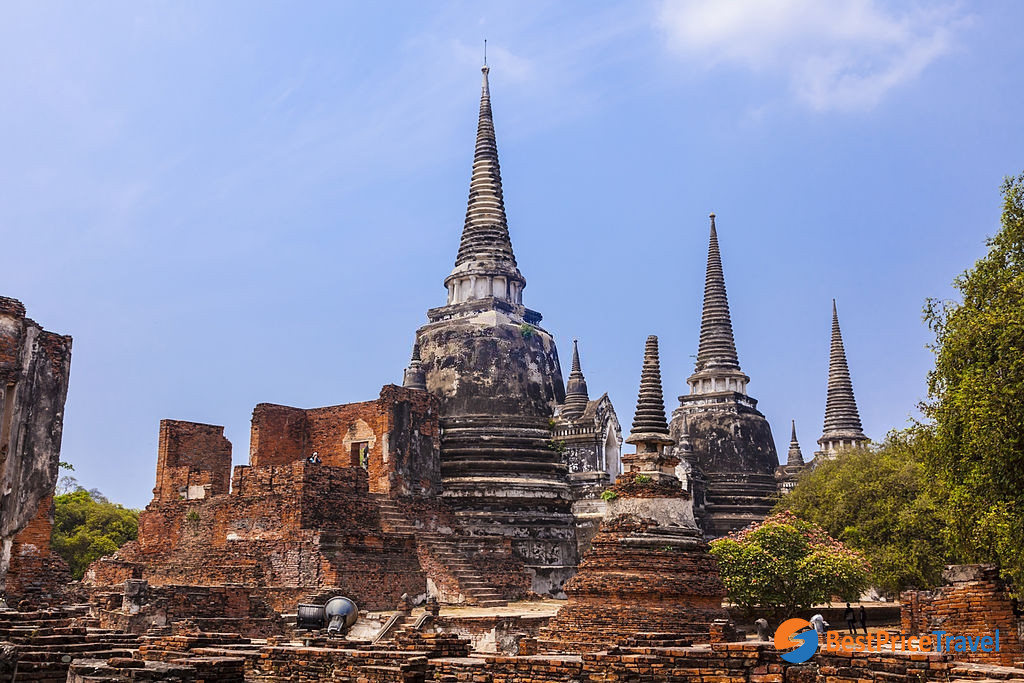 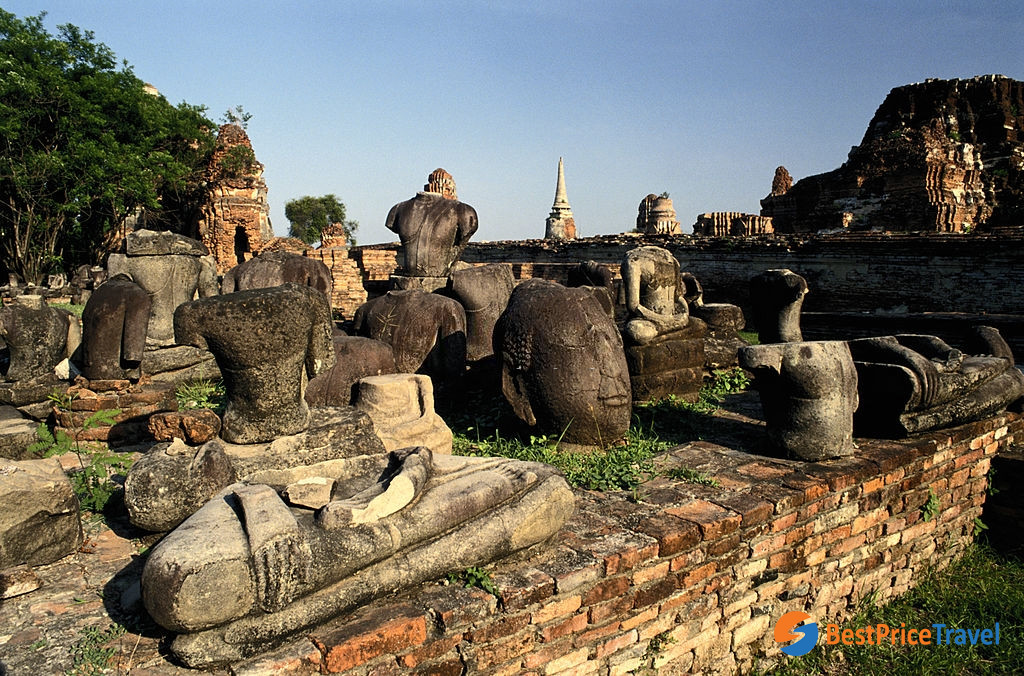 The special thing about Wat Phra Sri Sanphet is that there are no monks residing here. The monks are only invited during the religious ceremonies of the Royal Family. In 1500, King Ramathibodi II proceeded to cast a 16m high gold-plated Buddha statue in homage to the Buddha. However, the invaders of Burama in 1767 melted the entire gold layer on the statue, destroying the beautiful and magnificent masterpiece. Later, King Rama I (1782-1809) transferred the remains of this statue to Wat Pra Chetaphun in Bangkok. Despite many ups and downs or war traces of Wat Phra Si-sanpeth, the temple remains the pride of Thai people. Through the ruins, we understand more about the glorious period of a mighty dynasty. 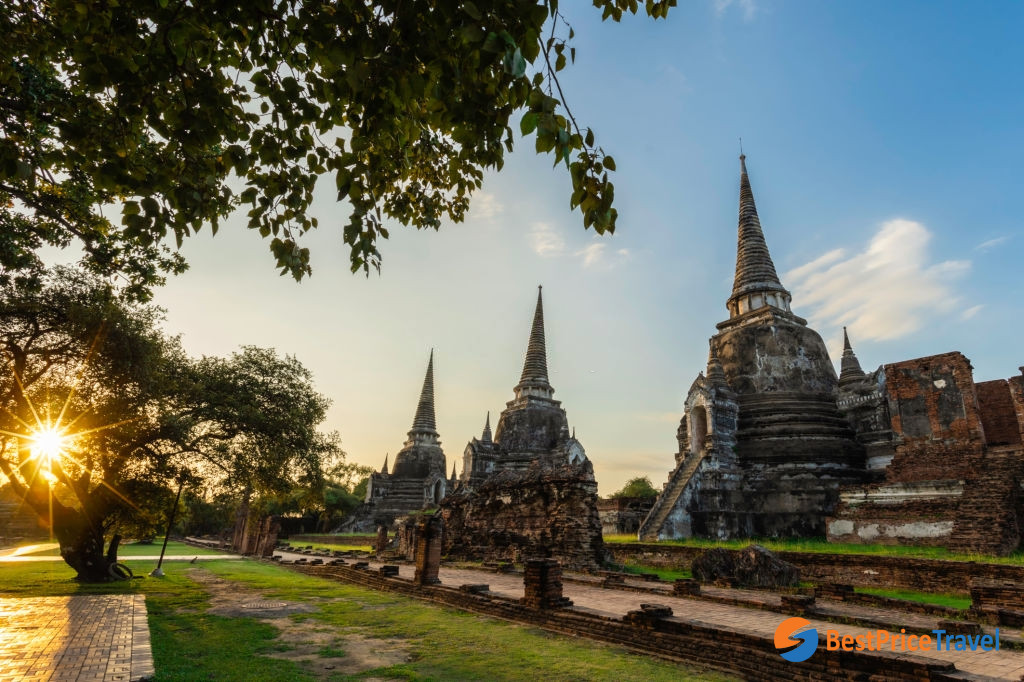 The ancient space combines with the beautiful natural scenery of red porcelain flowers, creating a quiet and peaceful picture that attracts Thai tourists to come and visit this destination during their trip to Ayuthaya. Today the temple and the old palace are preserved by the government to restore some items and are open to visitors. Just like any other temples in Thailand, the best time of the day to visit is early in the morning or near sunset when the sun begins to spark the amazing golden light. In harmony with the magnificent temple is the decoration of the surrounding flowers, promising tourists the best photos ever. 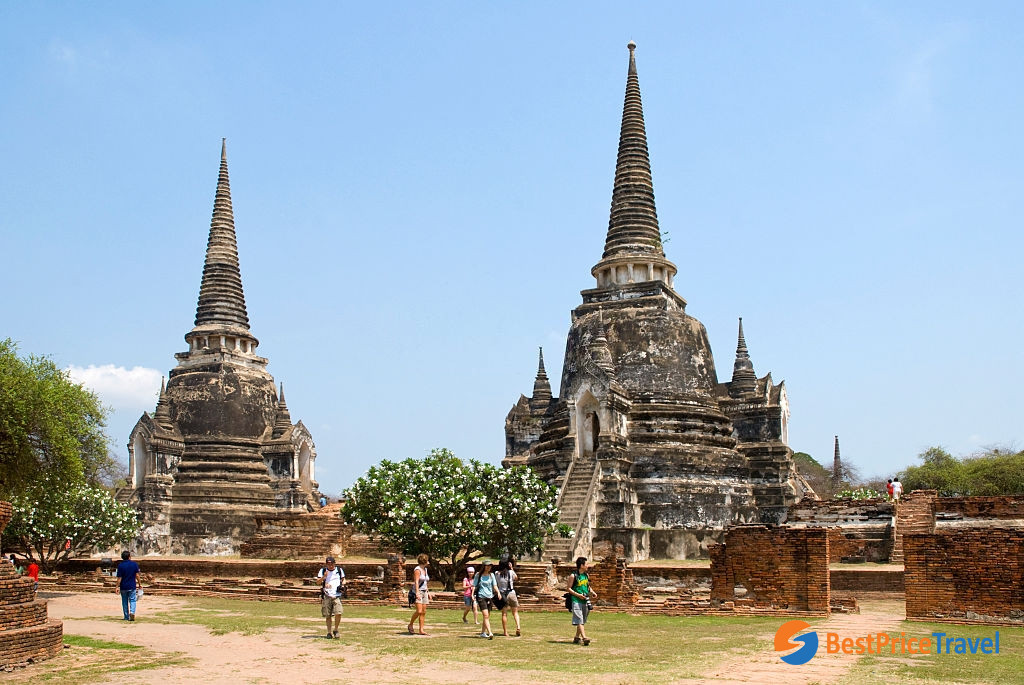 The temple is open from 8am to 4pm. The entrance fee for each guest is 50 Baht. Since this is an outdoor activity, tourists are recommended to visit during the dry months of Thailand, preferably from November to March. There are several ways to get to Wat Phra Sri Sanphet temple. Tourists can take a taxi, bus, rent a motorbike or experience the signature tuk tuk. If you wish to try out tuk tuk, remember to bargain for the best price. Bringing hat or drinking lots of water is highly suggested.