Coming to Bangkok, tourists should definitely pay a visit to Wat Suthat, the Giant Swing Temple of the first grade in Thailand.

Wat Suthat, famous for its towering red gate standing tall at the entrance, is one of the oldest and most impressive temples in Bangkok. It features an elegant chapel with a large roof, beautiful wall paintings and intricately carved teak doorframes. Construction of the temple was commissioned by King Rama I (1782-1809) yet it was finally completed during the reign of King Rama III (1824-51).

Wat Suthat was established for the purpose of housing a bronze statue of the Buddha in the 13th century, transported by boat from Sukhotai. Located in the Old City area, just east of Royal Field, tourists can easily combine a visit to Wat Suthat with the Temple of the Emerald Buddha, Grand Palace and Wat Pho. 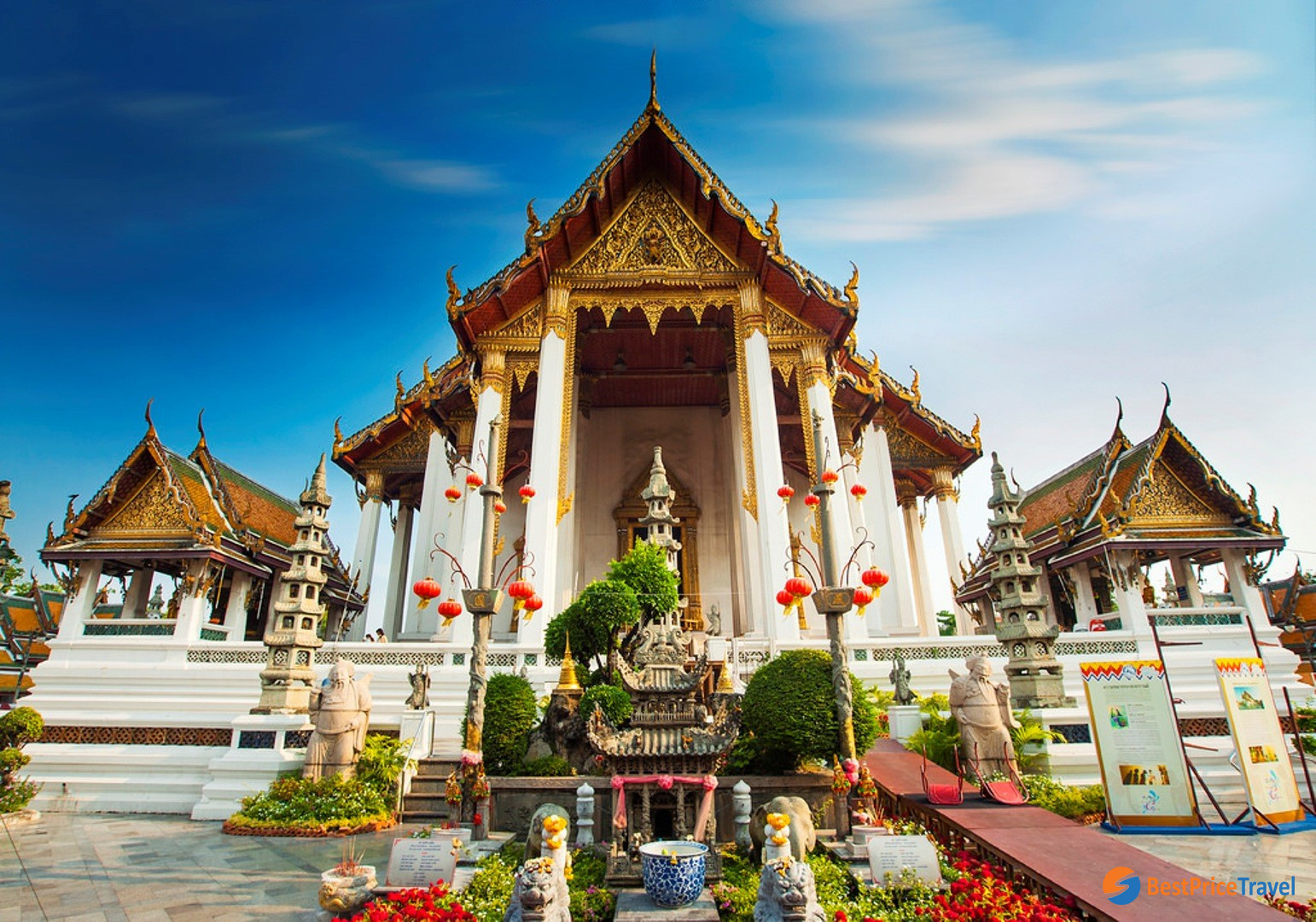 The temple of Wat Suthat

Wat Suthat is perhaps more famous for its giant red swing than the architecture inside the temple. The walkways of the temple are surrounded by 156 Buddha statues along the outer walls while the four paths are exquisitely carved with intricate motifs. The inner wall of the temple depicts 24 images of the Buddha before Nirvana, using modern Western painting technology, which is unique to Wat Suthat. Along the walls are carved Chinese stone and the impressive octagonal eight-story tower. Many believe that these are ballast rocks of Chinese traders. 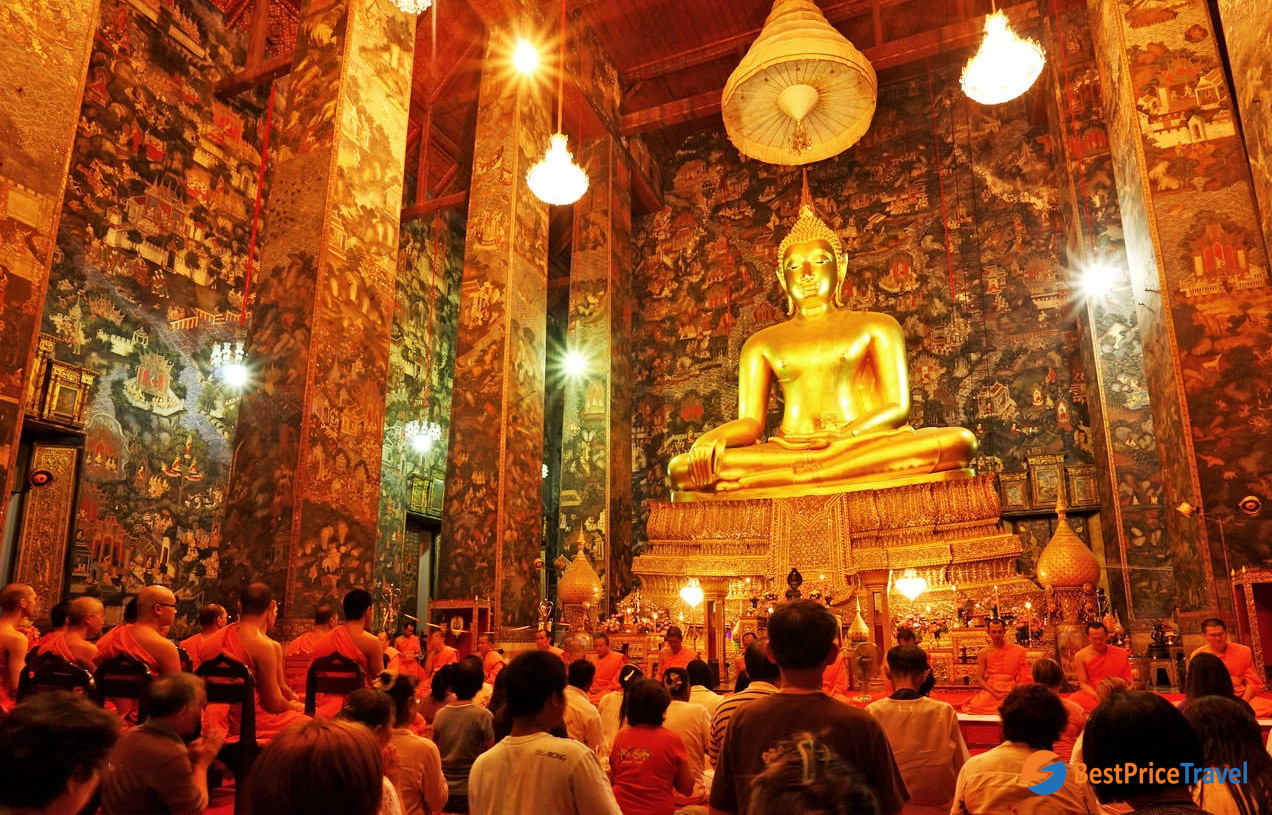 Situated between Wat Suthat and Bangkok City Hall, the 21.15-meter giant swing consists of two tall red pillars that can be seen from afar. After a few times of repairing, the original one, built-in 1784, was replaced in 2004. The construction is a complex process of hand carving and painting by the most skillful artisans of Thailand.

In the past, on the occasion of the Brahmin festival held every year after the main harvest of December, young men were challenged to climb up and down in the air, up to 24 meters high from the ground while the swing was spinning to get a bag of silver coins with their teeth. There were few injuries and even deaths, yet this place still attracts both worshipers and tourists to visit every year. 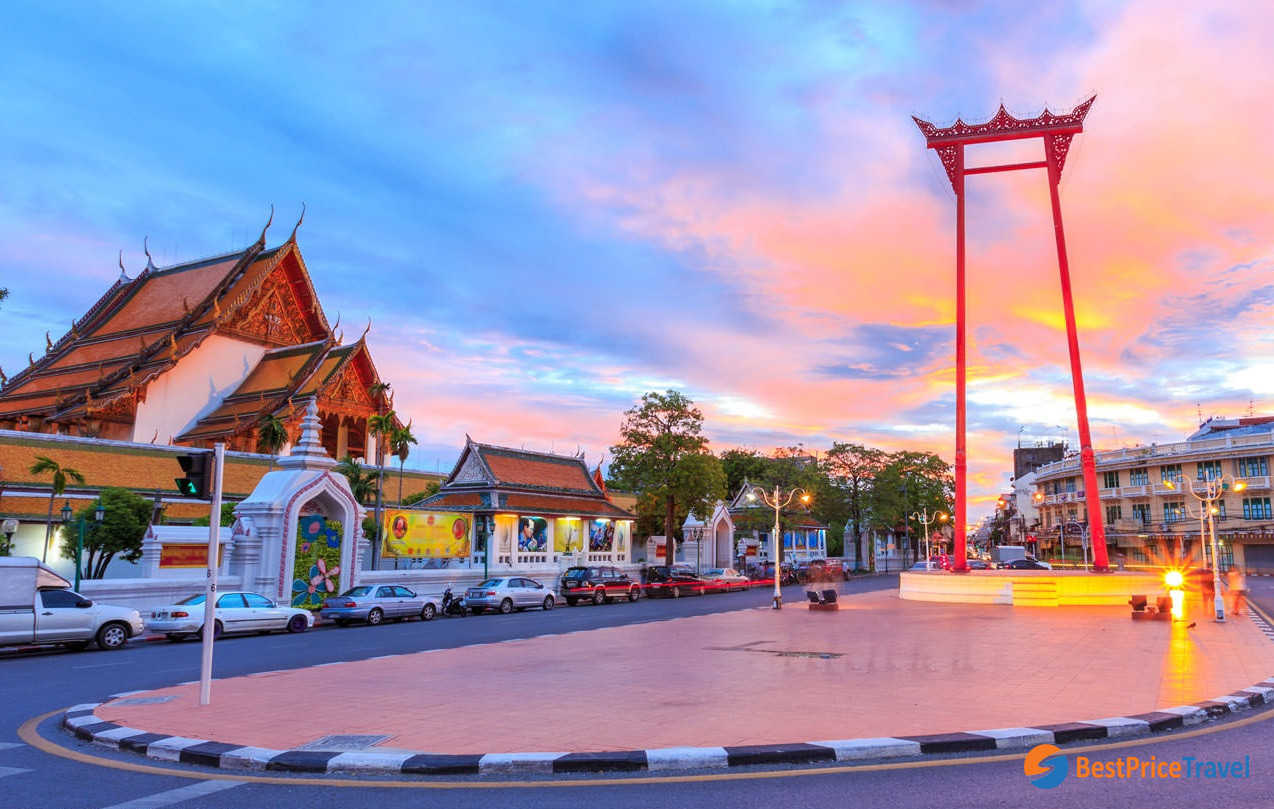 The giant swing in front of Wat Suthat

From the Grand Palace, tourists can take bus No. 508 to get to Wat Suthat or just simply walk for 15 minutes to reach the destination.