There are several abandoned and mysterious places around Indochina. Would you want to go there?

Few people realize that Indochina is a destination to find the world’s most wondrous and curious places. Keeping up with the last post about 10 Mysterious Places Around Indochina - Part I, here are 5 other places in Indochina that bring mysteries. 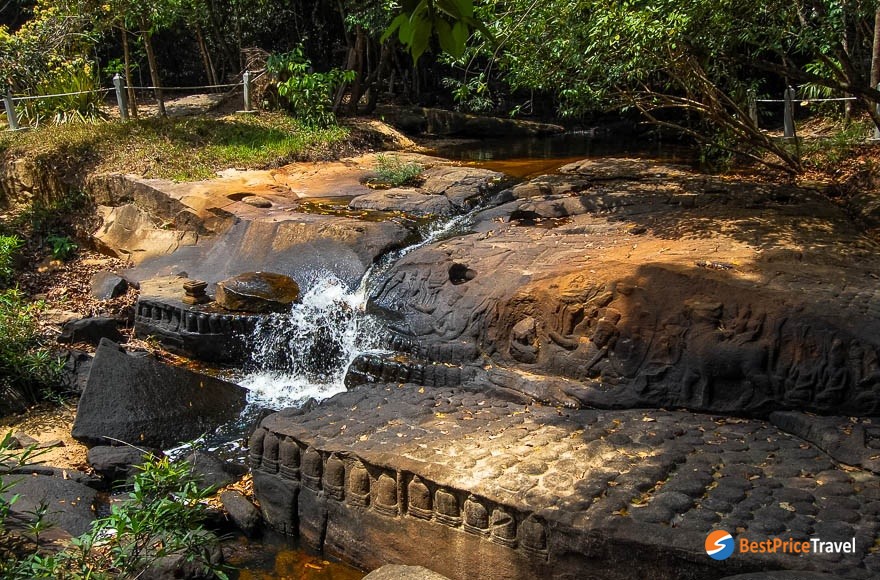 Kbal Spean is an ancient historical archaeological site set deep in the jungle located on the edge of the sacred Kulen Mountain. Kulen Mountain is an important pilgrimage site for Cambodian people, about 50 kilometers to the northeast of Siem Reap. Kbal Spean is essentially a small river that flows from the summit of the Kulen Mountain down to the fields around Angkor plain below. The river is a real treasure with an uncountable number of lingas (phallic symbol of Hindu God Shiva) carved into the riverbeds and surrounding rocks, giving it the name "River of Thousand Lingas". You can see not only Shiva lingas but also astonishing carvings of yonis (symbol of the goddess Shakti), Hindu Gods and deities, divine figures, and animals. 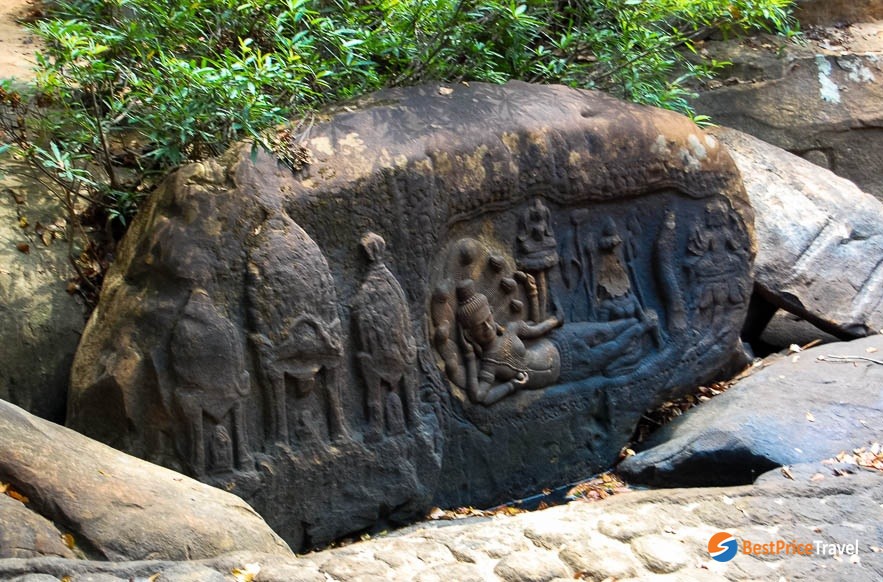 The original carvings were made in the late 10th, early 11th centuries. Who was the creator of them? Nobody knows! But they are believed to be commissioned by Khmer kings. Locals believe that this blessing is the way to keep their lands fertile. The site was not discovered until 1968 when it was brought to the attention of a French archeologist working in a nearby ruin. Shortly after, the site became a sheltered place of guerillas during the bloody Khmer Rouge period and was closed to the public until 1998. 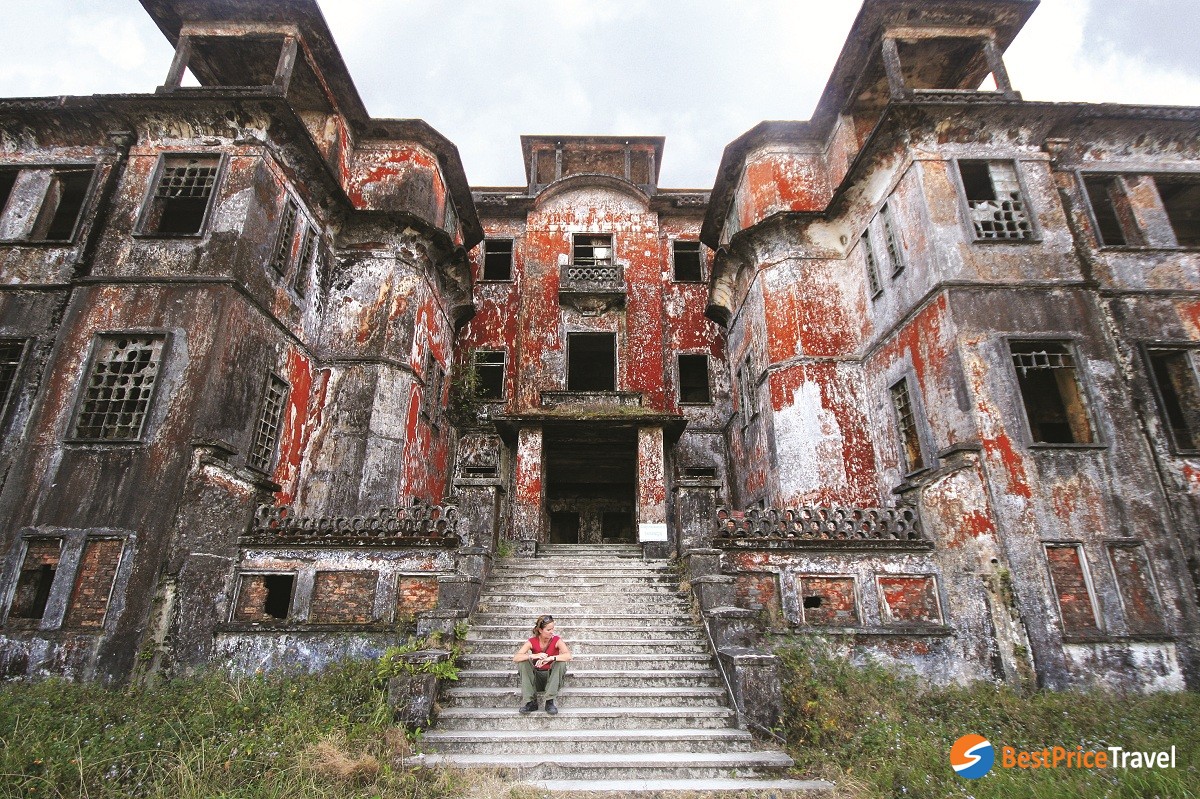 Bokor Hill Station has been abandoned for a long time

Bokor Hill Station sits atop the remote Damrei mountain in Preah Monivong National Park, roughly 37 km west of the town of Kampot in southern Cambodia. It was built by the French in 1921 as a mountainous retreat to escape from the humidity and the heat of Phnom Penh. It took only nine months to complete the resort, but a total of 900 people, mostly Cambodian workers, died during construction. Bokor Hill Station was completed in 1925, welcoming French colonists and Cambodians of the upper class. During the time of its operation, it was known for the luxury and grandeur. 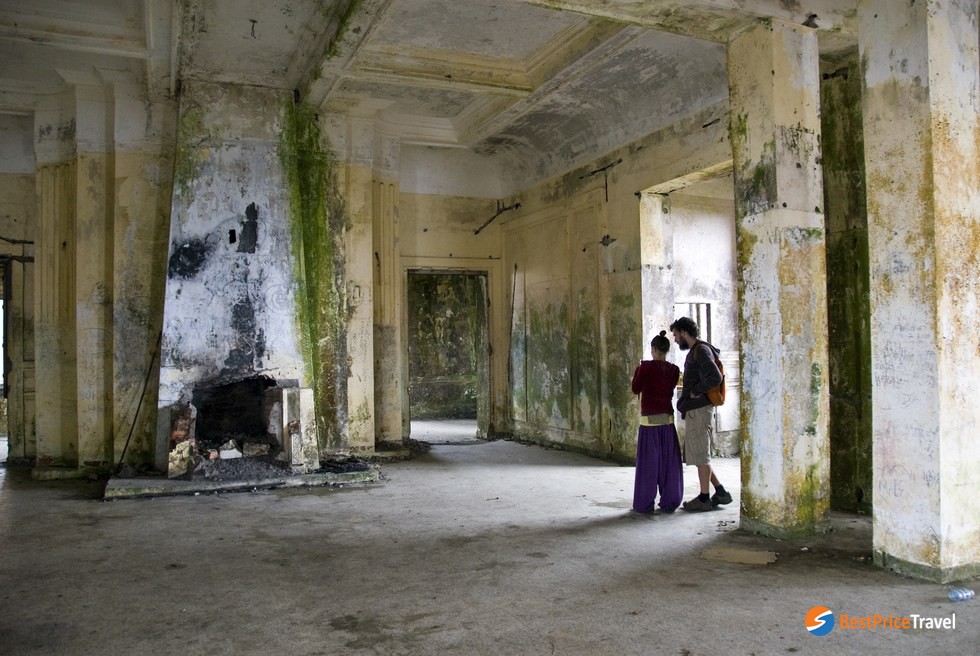 Tourists today can explore the abandoned structures of Bokor Hill

Besides the lavish Bokor Palace Hotel and Casino, there was a post office, shops, church, and royal apartments. 15 years later, in 1940, due to local insurrections by the Khmer Issarak ( an anti-French and anti-colonial movement), colonists left Bokor Hill Station. In 1962, a casino was built inside the new hotel, some other buildings were added as well. In 1972, Bokor Hill Station was once again abandoned when Khmer Rouge took over the area and it was used as their secret stronghold during the conflict war between Vietnam - Cambodia. Except for the renovated casino and the collapsed post office, the other buildings which the French built in the 1920s are still left virtually untouched. What the locals say about this place is that: “there are many ghosts.” And today, this destination is a trending site in Cambodia for visitors who fancy an adventure.

Before Bangkok, there was Ayutthaya, thriving from the 14th to 18th century – one of the largest and wealthiest cities in the world as well as an important trading region in its golden age. After the attack of the Burmese army in 1767, Ayutthaya became an abandoned place. They burnt the city and destroyed the temples, smashed sacred figures, vandalized the Buddha images by chopping off their heads. Unfortunately, the city was never rebuilt or repopulated. All that stands are crumbling brick walls, hundreds of temple ruins, and numerous headless Buddha statues. Many of the Buddha's heads have been found in museums in the U.S, and when Thailand asked for their heritages back, they were refused. 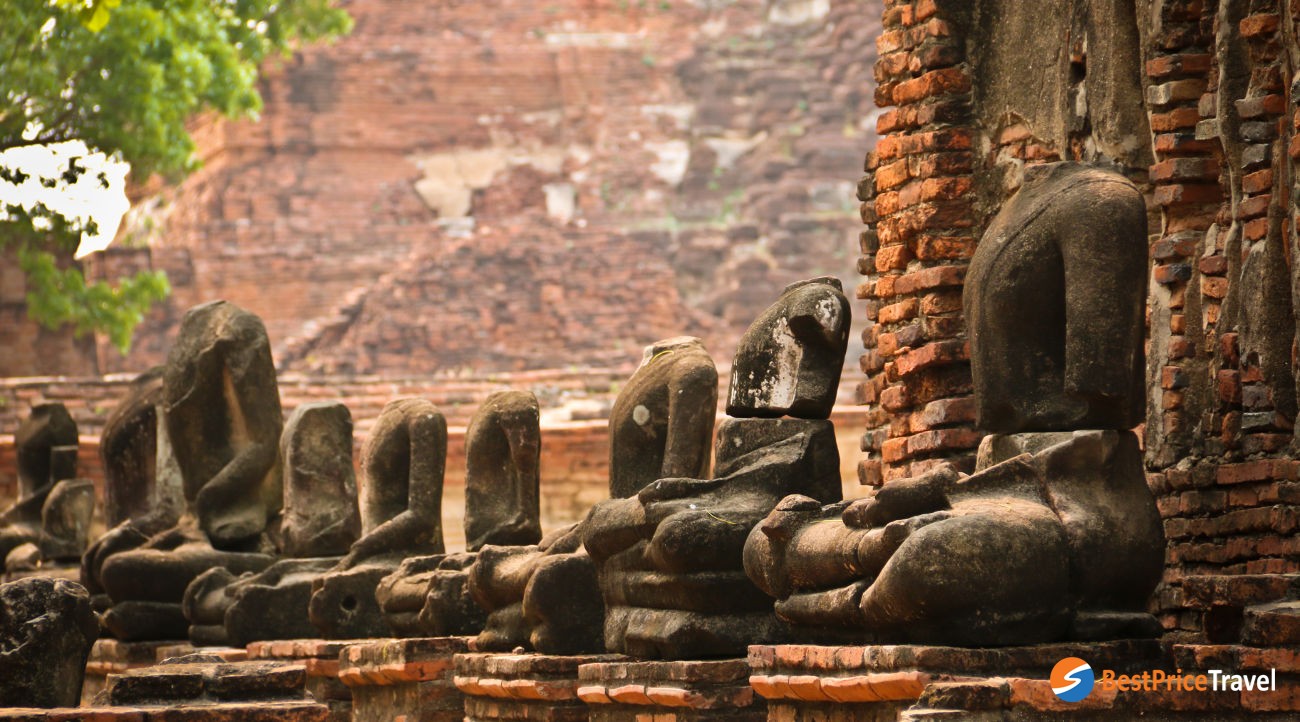 Headless Buddhas at the temple in Ayutthaya

One Buddha head did miraculously survive. That was the Buddha in tree roots at Wat Mahathat, also one of the most iconic Buddha images in Thailand. Nobody knows for certain how the Buddha's head became entwined in the tree roots.  One theory suggests that the head was buried underground during the conflict period and slowly lifted by the roots of the tree over many years. Others think a thief may have hidden the head and never come back to collect it. One thing for sure, the beauty of the Buddha's head is so legendary and it's literally a living part of the tree. 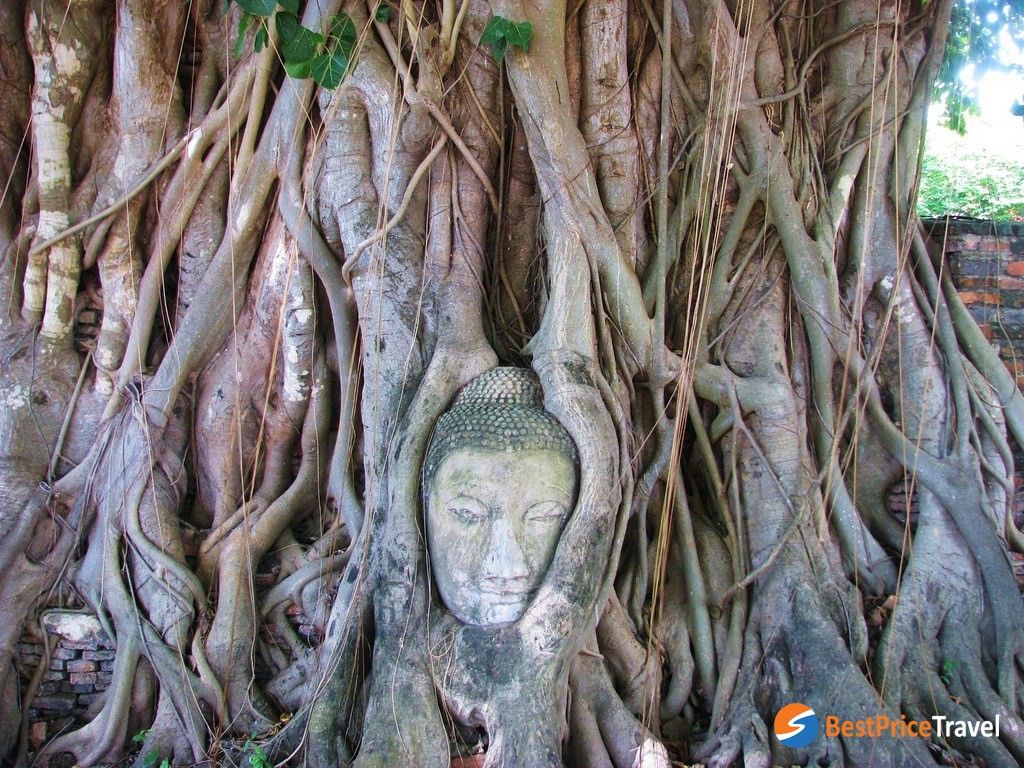 The Golden Rock of Kyaiktiyo (Myanmar) 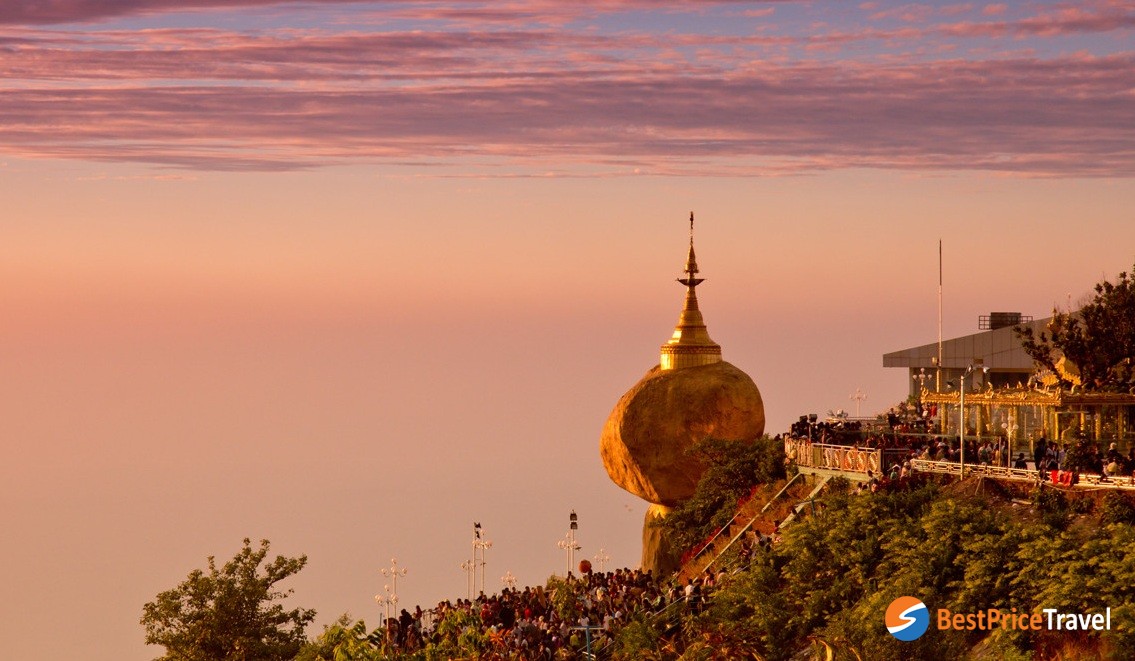 Kyaikhtiyo Pagoda found at the top of Mount Kyaiktiyo in a small town in the Mon State. The site is one of the most important pilgrimage sites in Myanmar. What gets everyone’s attention is the massive golden rock which rests precariously (and dangerously) on the edge of a cliff with more than half of its surface leaning out over open air. The balancing rock seems to defy gravity, as it appears to be on the verge of rolling down the hill. 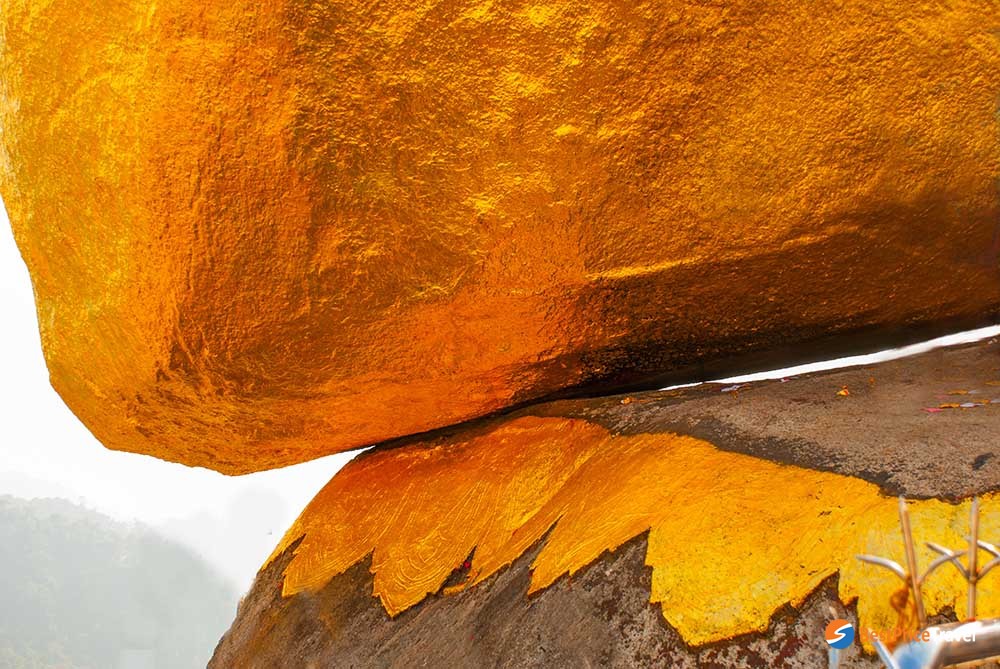 A folk tale here told that the rock remains in place because it is perfectly balanced on a strand of the Buddha’s hair. It is said that on his visit to the region, Buddha gave a strand of his hair to a hermit called Taik Tha, and then the hermit offered the hair to the king. Respond to his gift, the king presented him the giant rock representing his head which was pulled from the ocean to the top of Mount Kyaiktiyo. King also built a small pagoda atop the rock to enshrine the Buddha’s hair. In Burmese, "Kyaiktiyo Pagoda" is translated as ‘the pagoda on the hermit’s head’. Pilgrims have flocked to the site ever since. Over years, the sacred rock is covered with many layers of gold leaves by devotees in the sign of respect to gain merit and purify their souls. 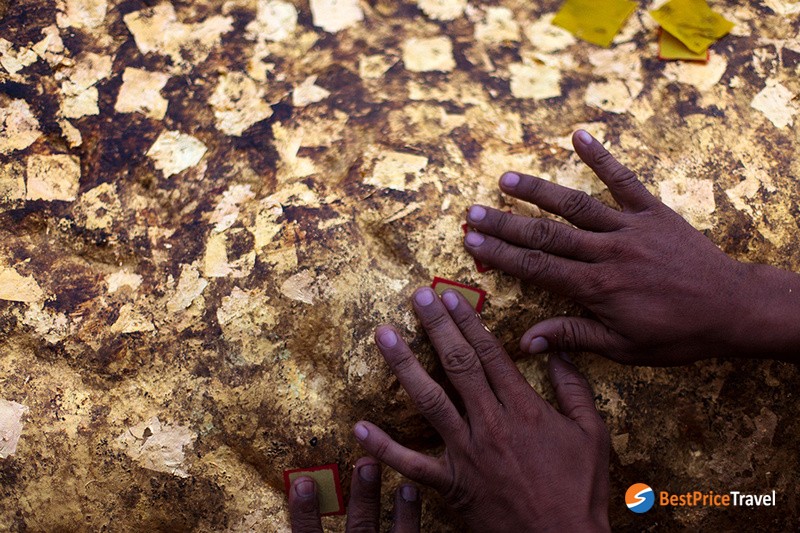 The Lost City of Mrauk U (Myanmar)

For travelers planning a trip to Myanmar, it typically consists of, Bagan, Inle Lake, and Mandalay. Mrauk? It is a place that they have never heard of before. Mrauk U is a quaint little town in the Rakhine State, near the Bangladesh border. 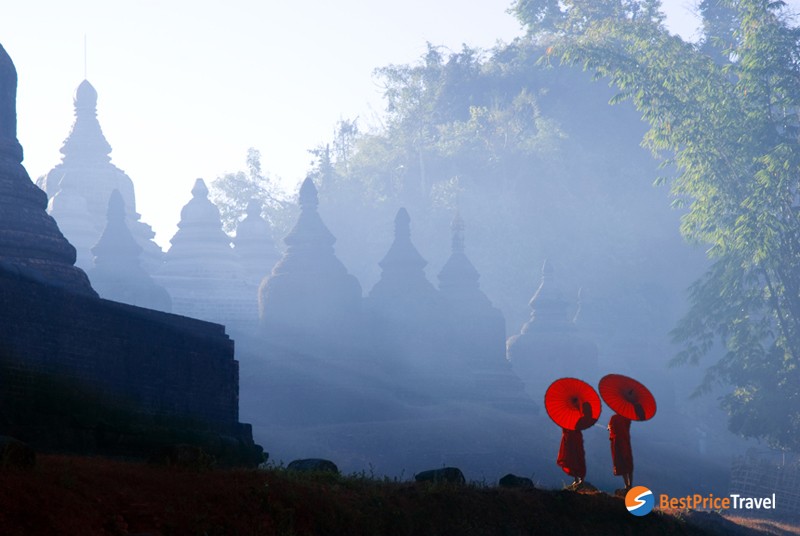 The lost city of Mrauk U

Mrauk U was served as the capital of the Mrauk U Kingdom from 1430 to 1785. At its time, Mrauk U was once a wealthy, vital trading city that attracted traders and merchants from the Middle East, Holland, Portugal, Spain, France, and other Asia countries. After the First Anglo-Burmese War, the kingdom was collapsed and the trading center was moved to the coastal ports in Sittwe. 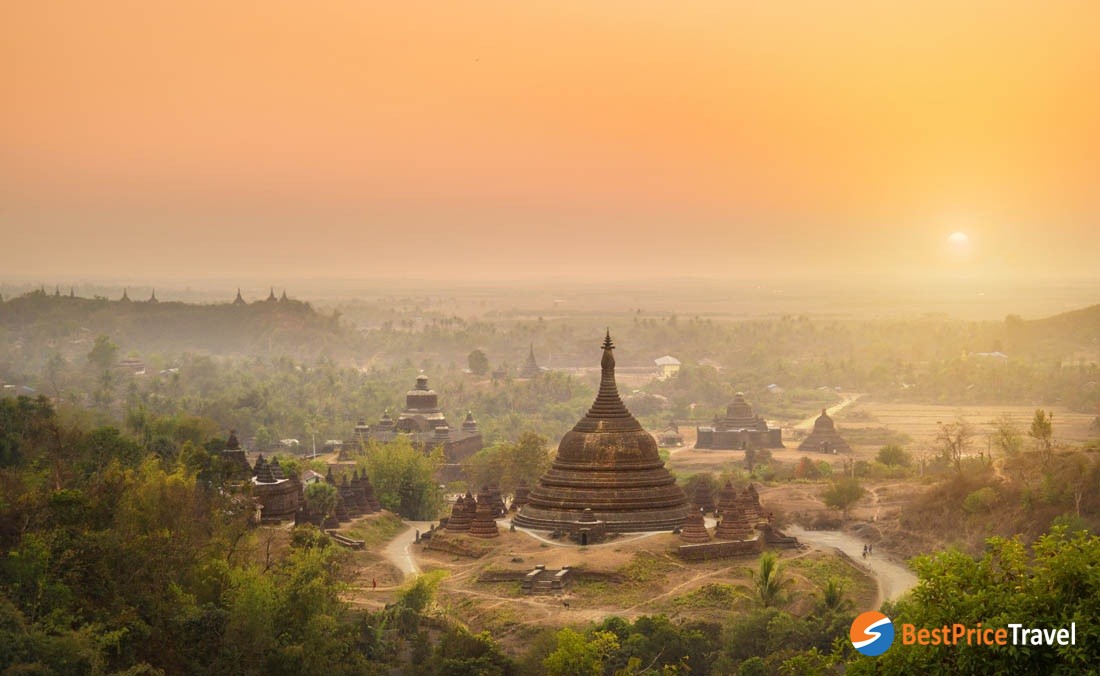 Up to the 18th century, it was a vital trading port

Mrauk U of today is frozen in time with limited access to electricity. Forgotten by outsiders, Mrauk U became a "lost city". Traveling to Mrauk U  is having a journey back in time. Life moves slowly. Simple homes, small wooden huts are scattered across the countryside. Transports are mostly wooden ox carts, old-fashioned tractors, bicycles, and scooters. Around the village, you can see farmers taking care of their crops. Many villagers are still not connected to running water and have to get their supplies from the waterholes scattered over the village. One of the reasons Mrauk U is so unspoiled by tourists is that it’s difficult to reach. The most comfortable (and popular) way to get there is by taking a flight from Yangon to Sittwe then followed by a 5-hour boat ride up the Kaladan River. 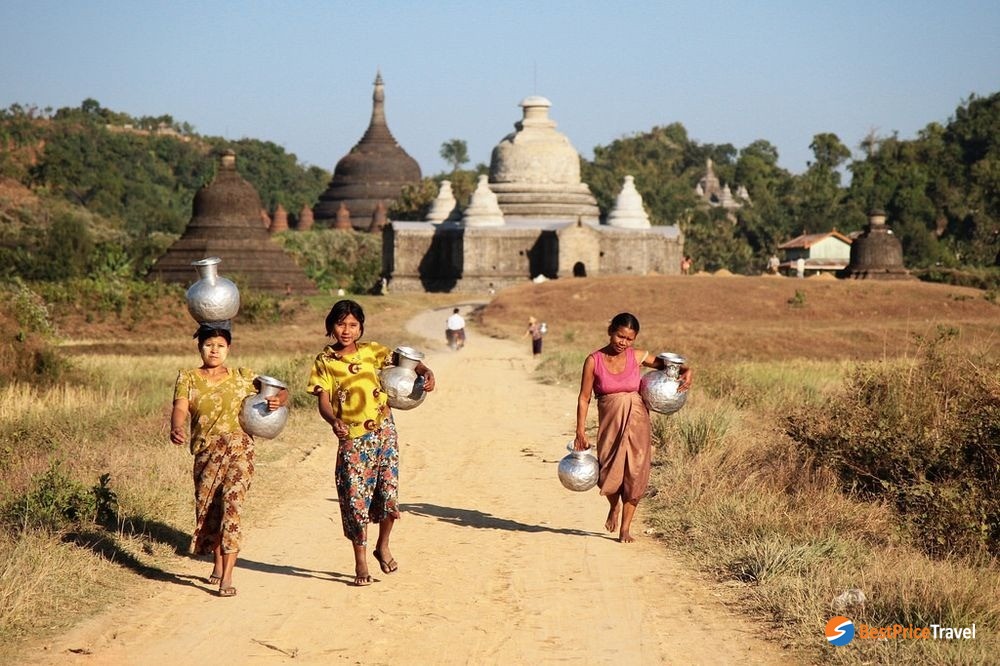 Village life in Mrauk U happens all around the ancient temples

Similar to Bagan, Mrauk U holds a large collection of some 700 ancient temples and pagodas which were built during the reigns of 49 Arakanese kings. While the site is not as large or as imposing as Bagan, it has its own charm. Ancient jungle-clad ruins make great backdrops for photos. Especially at sunrise when morning fog adds a mystical effect to the scene. 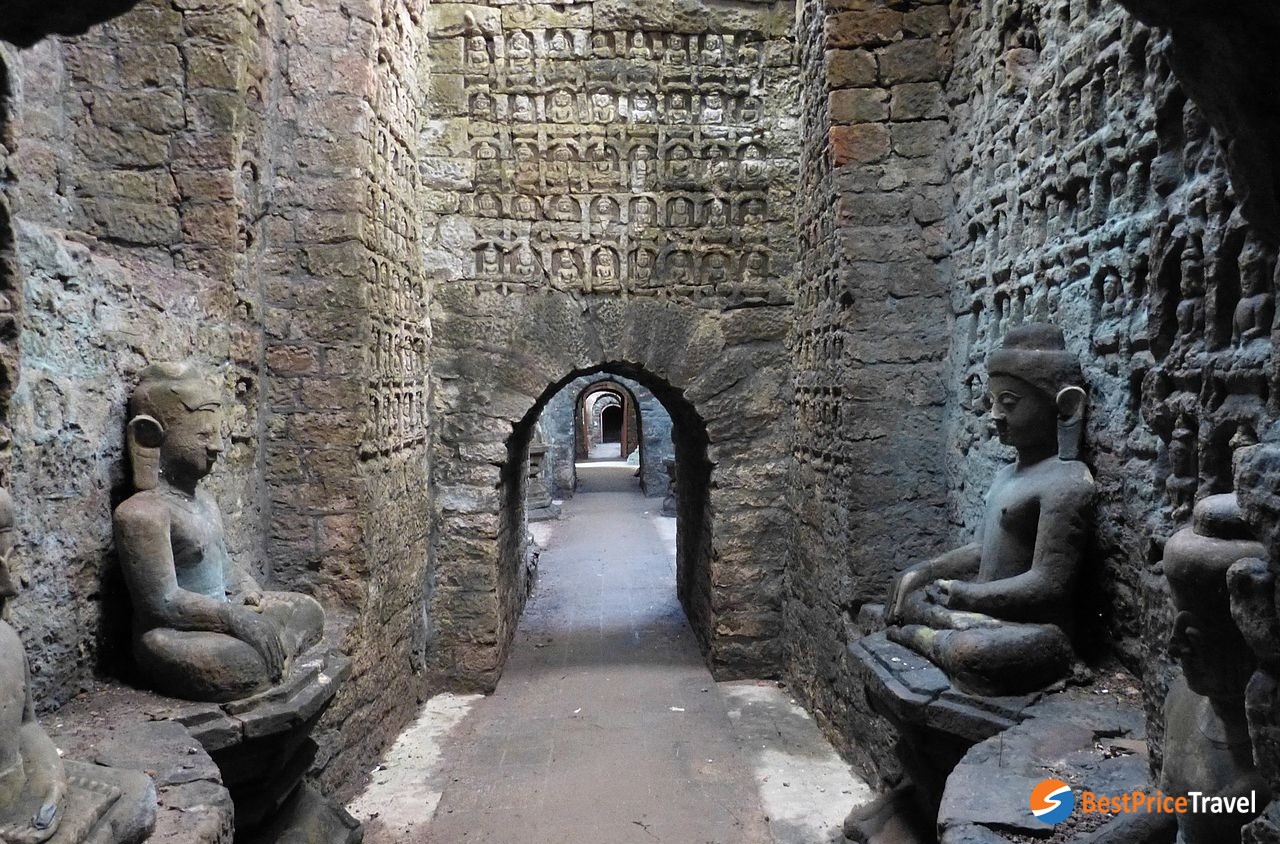 Inside Kothaung Temple. Welcome to the ancient world!

Temples are not the only attraction in Mrauk U. The village offers a chance to glimpse into life in the past and connect with the local culture. Different from Bagan while the military government forced the people living around the old temples and pagodas to move away, in Mrauk U people still live and farm around them. 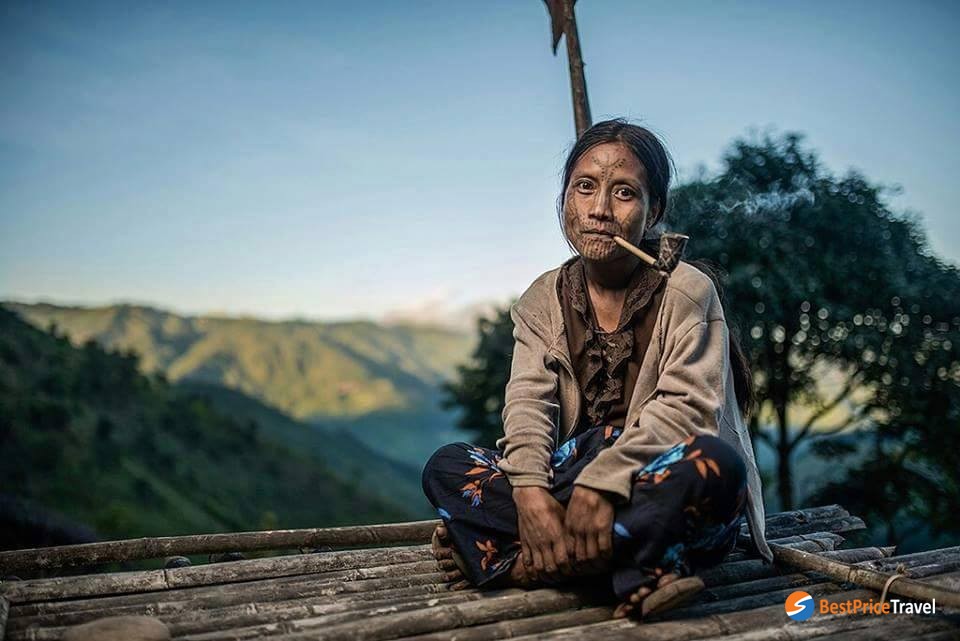 Another reason to visit Mrauk U is the remote tribal Chin villages along the Lay Myo River. It’s worth getting a day trip to meet the ‘tattooed face women’ of the Chin tribes, talk with them, and listen to their stories. 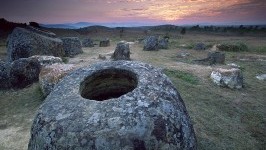 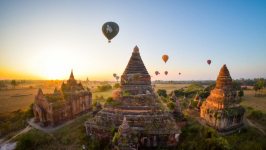 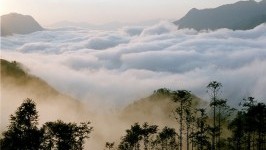