Bayon Temple is one of the most popular and distinctive structures in the Angkor Archaeological Park. It is a mountain temple built to represent Mount Meru, the center of the universe in Hindu and Buddhist cosmology.

Prominently in the heart of the ancient city of Angkor Thom, the Bayon is uniquely different from most Khmer temples because of no surrounding moat and walls with entrance gates. The Bayon is well-known for numerous huge stone faces of the Bodhisattva Avalokiteshvara sculpted on many towers which have become some of the most iconic and recognizable features associated with the ancient Khmer Kingdom and its architecture.

In honor of the Great King

Built at the late 12th century, The Bayon was the state temple of King Jayavarman VII, the great Buddhist ruler. The Bayon was sometimes called Jayavarman’s Temple in honor of the Khmer King. Originally intended to be a Mahayana Buddhist Temple, it was the last state temple built in the Angkor complex and was constructed to represent Mount Meru, the center of the universe in Hindu and Buddhist cosmology. When the empire reverted back to Hinduism in the mid-13th century, the Bayon was altered into Hindu styles during the reign of King Jayavarman VIII before undergoing further modifications during the Theravada Buddhist Kings in later years. 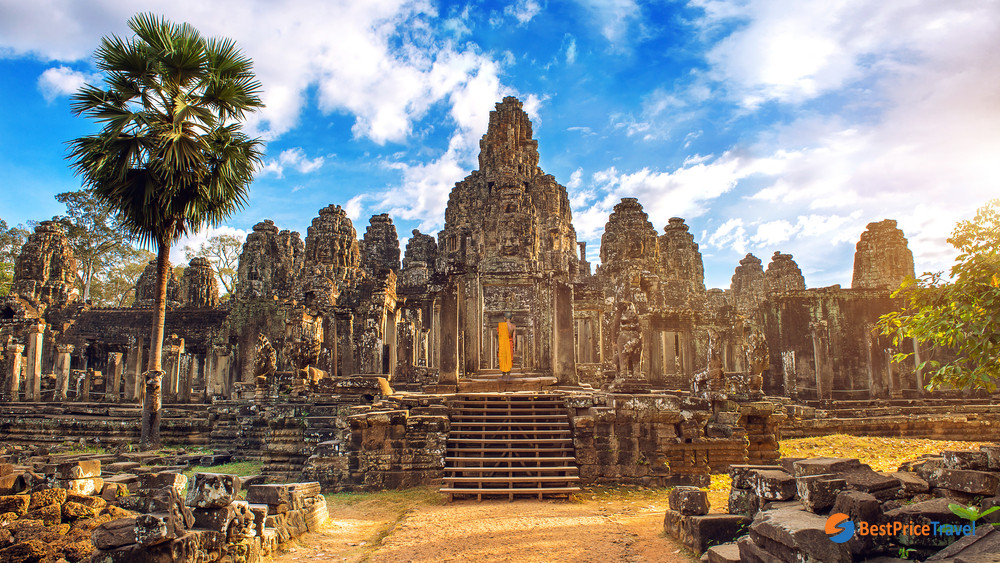 There are some hypotheses about the tranquil faces of the Bayon among historians. Some believe that these faces are meant to represent the Bodhisattva of compassion known as Lokesvara. Others suppose that the faces are portraits of King Jayavarman VII because they do bear a striking similarity to other statues of the King. In addition, this Buddhist temple also were home to other Gods including separate shrines dedicated to Vishnu and Shiva and other worshipped deities.

The layout of Bayon Temple

From a distance, the Bayon seems like a rather formless jumble of stone without any impressive like the magnificent façade of Angkor Wat. Once get into the inner, you’ll find out the interior is a maze of galleries, towers and passageways on the three different levels.

The 3rd enclosure is the largest one consisting of the outer galleries with 4 pavilions and 4 gopura entrance gates. There are extensive sculpted bas reliefs that depict scenes of historic events, battles and daily domestic life in Angkor since the late 12th century.

The 2nd enclosure contains the inner galleries which are primarily decorated with the Buddha sculptures, but most of them were turned into Shavite images illustrating mainly Hindu religious and mythological tales during the Hindu reaction of Jayavarman VIII. 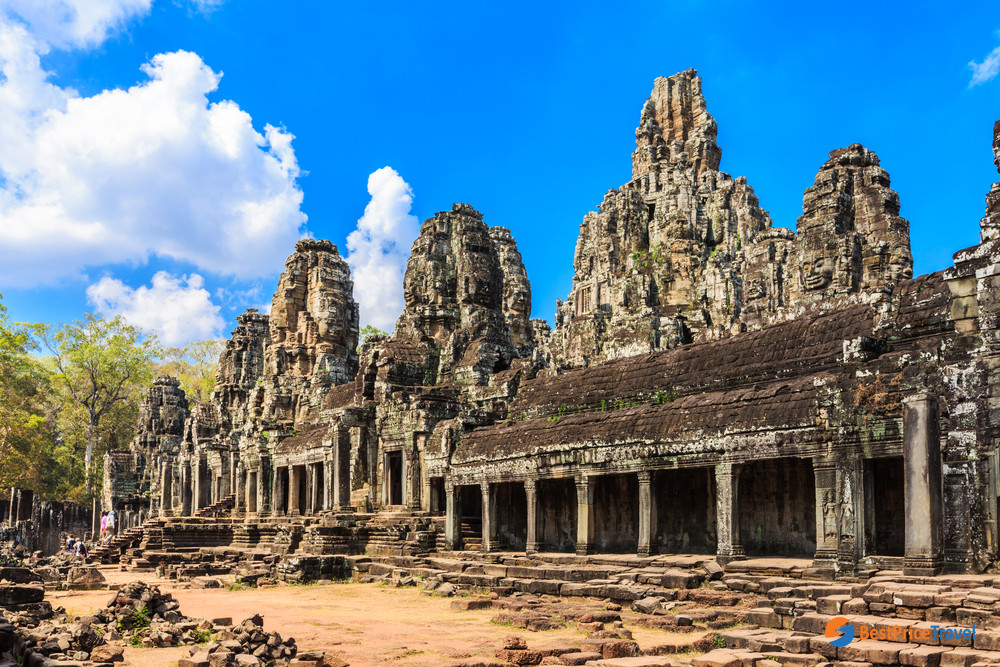 The inner galleries in Bayon Temple

The central sanctuary is located on the East of the 1st enclosure where the images of the Buddha have been transformed into Shavite images. Around the central sanctuary, there are eight sanctuary towers bearing sculpted faces and four satellite sanctuaries including the Western one dedicated to Vishnu, the Northern to Shiva and the Southern to the Buddha.

Standing right in the center of the walled city, Bayon Temple represents the intersection of the Earth and the Heaven. Exploring the Bayon can be tough on your knees because there’re lots of narrow corridors and steep flights of stairs forming the construction of around 40 remaining towers, over 200 serene faces and more than 11,000 figures of astonishing bas-relief carvings.

The Bayon’s stone faces initially represented the faces of Lokeshvara, the Bodhisattva of compassion. Each face is facing one of the cardinal directions of the compass and showing serene smile with eyes closed, which indicates the state of inner peace and perhaps the state of Nirvana. 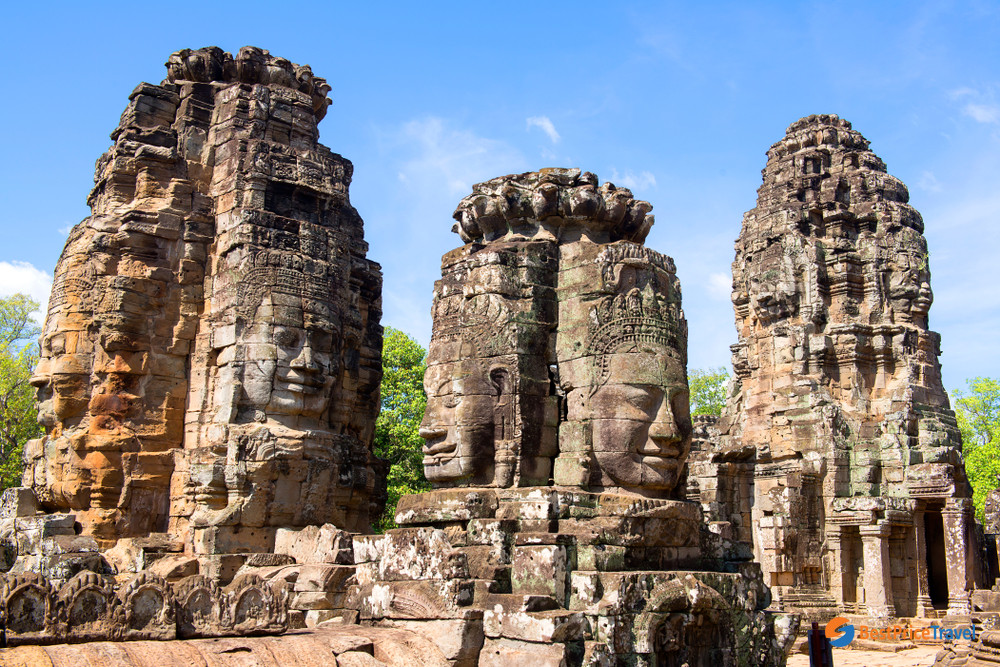 Scattering over 1.2 kilometers of exterior walls, the extraordinary collection of bas reliefs is gilded in an exquisitely sophisticated manner. Some of the bas reliefs are scenes from a sea battle between the Khmer and the Cham, while the others are extensive carvings of daily life including market scenes, religious rituals, cockfighting, chess games and childbirth. 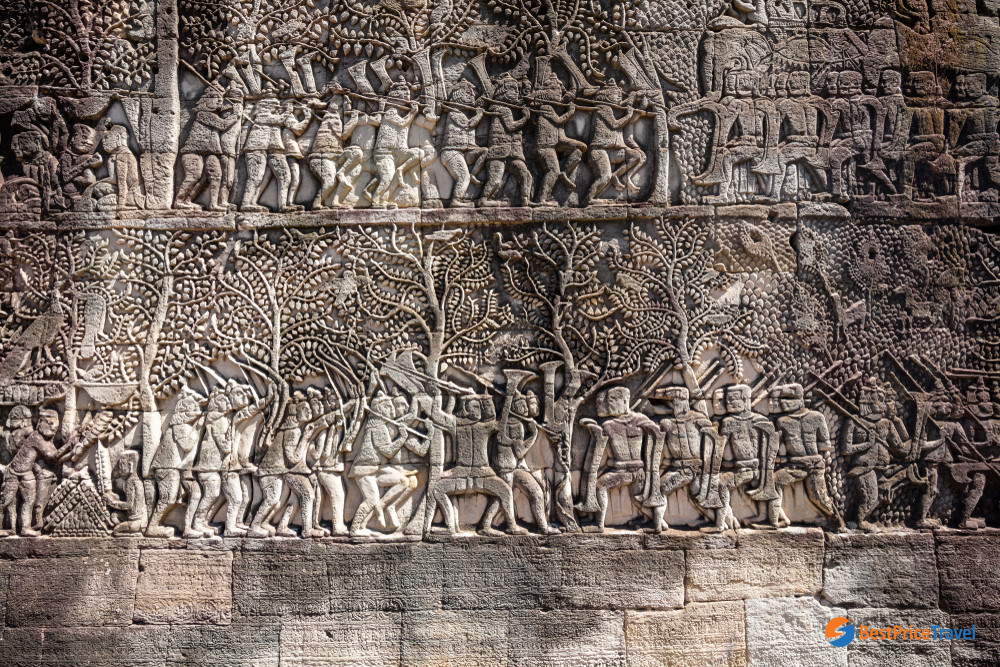 Bas reliefs depict the battles between Khmers and the Chams

How to visit the Bayon

Considered as one the “big three” in Angkor Archaeological Park, beside Angkor Wat and Ta Prohm, the Bayon is easily reached from any directions because it is protected on all sides by the city of Angkor Thom itself. On the visit to Angkor Thom, there are four roads from the four entrance gopuras leading directly to Bayon Temple.

To get to Angkor Site, most people hire a tuk-tuk or bicycle on a tour which can be organized through your hotel or travel consultant. A typical day usually starts with a sunrise sightseeing of Angkor Wat, a circuit through the Bayon, Ta Prohm and multitude other temples. However, if you want to beat the crowds, it’s best to visit the Bayon in the afternoon or in the early morning when the temple feels almost mystical in the dark.

Included in the temple pass of the Angkor Archaeological Park, Bayon Temple is often combined with a tour around the Angkor Wat, Angkor Thom and Ta Prohm to fill their one-day pass at the temple complex. You can book the admission ticket directly via the main office of Angkor Conservation Area ticket booth. In addition, there are plenty of travel consultants that provide booking services as well as the whole Angkorian tour.

Visiting hours in Angkor National Park range from 7:30 am to 5:30 am but the Bayon is opened from 5:00 am to 5:30 pm, to make it possible for sunrise and sunset views.