Cai Beo fishing village near Ben Beo harbor is one of the largest and famous ancient villages of Vietnam. This floating village attracts thousands of tourists come to visit each year not only by the peaceful atmosphere but also by the charming landscape and the life itself of the fishing village.

Cai Beo is located in Ha Long Bay, about 1 km south of Cat Ba Island. That is a fishing village of about 300 houses living mainly on seafood farming and fishing. It is widespread, around 18.000m2. The members of a family in the fishing village live only in a house of about 5-10 m2 with very simple equipment and utensils. However, visitors can still catch the happy and friendly smiles of Cai Beo villagers when visiting this place. 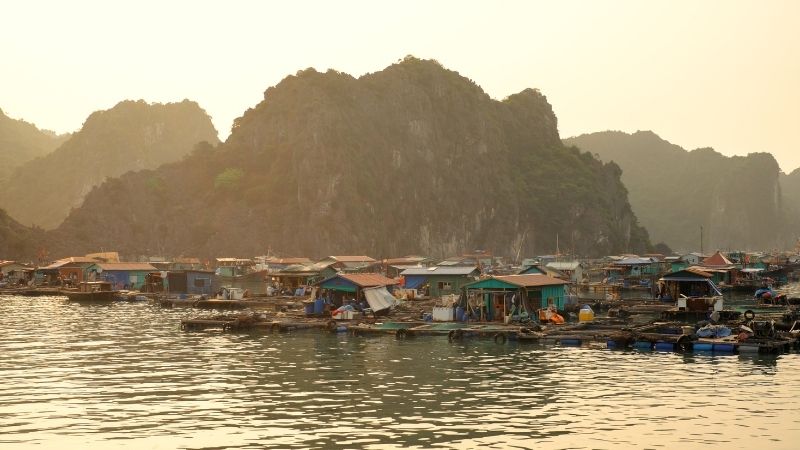 Cai Beo is considered the most important archaeological site in the sea area of northeastern Vietnam. In 1938, French archaeologist M.Colani discovered that Cai Beo was the cradle of the ancient culture of Vietnam.

In 1981, Vietnam History Museum excavated this area for the second time. Although the excavation area is only 78 square meters, many stone artifacts which are considered to belong to pre-Ha Long time and Ha Long time had been found

In 1986 and in 2006, a third and the fourth excavation were done. The team of specialist scientists undertook extensive excavations and they discovered 10 tombs with 137 stone artifacts and 1,424 pottery shards, all made from granite, ceramic, and twisted rope as well as fish bones, shells and oysters. These excavations once again proved Cai Beo floating village has been existing from the pre-Ha Long time and Ha Long time.

Analysis indicated that this is a site of archaeological importance and people living are believed to first settle here 7000 years ago. They lived mainly on fishing on the sea. They change from hunting, gathering to fishing, and planting crops. The first inhabitants are likely to be the descendants of ancient people in Hoa Binh- Bac Son.

Nowadays, local people in Cai Beo live in actual fishing boats, or on simple rafts made of mostly wood that float on platforms similar to pontoon boats. The houses are small, having only one or two bedrooms. Some have their own squid fishing and clam and mussel farms. There are streets, blocks, neighbourhoods all within the fishing village. There are also buildings used as schools, restaurants, and guesthouses. It is wonderful to observe life in Cai Beo, so many tourism companies have sent their customers to village. Some households have adapted well, offering kayaks for rent or guest houses overnight, which promises a bright future for the children here. 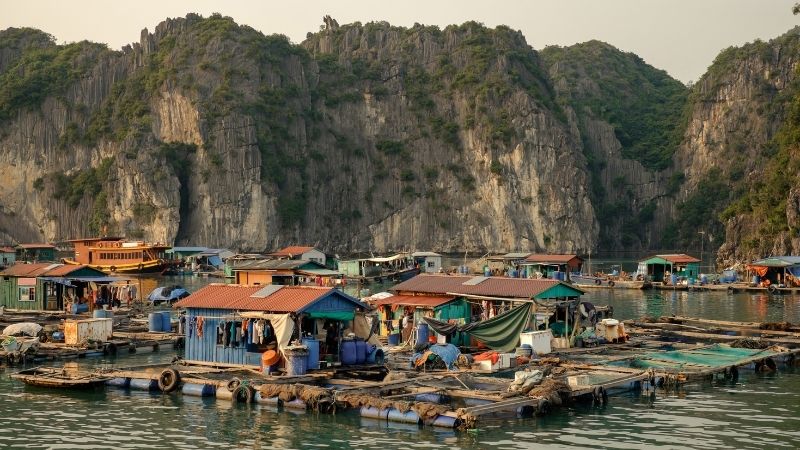 Cai Beo fishing village is only about 2 kilometres from Cat Ba town. Visitors can go here by car or motorbike, then take a small boat to visit the village.

Things to do at Cai Beo Floating Village

Local people here who were involved in the cultural development of Cai Beo such as gathering, hunting, and agricultural settlement are super friendly. They have a simple, but happy life. Coming to this village, you will have a great chance to learn about culture and lifestyle of locals by chatting with them, joining fishing, or other activities

Visitors and tourists also travel to village because of the interesting and poetic scenery. When coming here, you can see many boat houses joined into groups on the green water surface, under the blue sky, and surrounded by impressive mountains. It is wonderful for tourists to observe and take pictures of Cai Beo. 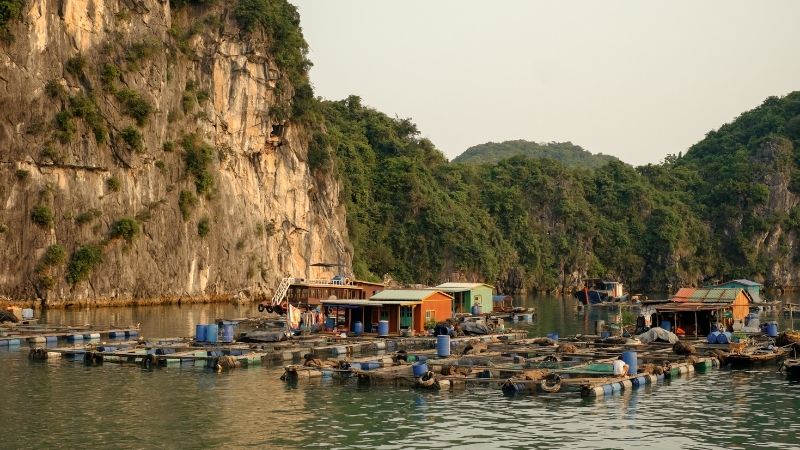 The beautiful scenery of Cai Beo

If visiting this village during the daytime, you can walk from one house to another by stepping on the cage or crossing a small bridge. That would be great if you can walk like that and join with local people fishing activities

When you stay overnight in the village, you will have a chance to offshore with the fishing villagers, drop the net to fish by yourselves.

As many tourists come here to visit, households in Cai Beo villages have turned to sell seafood for tourists. You also have a chance to taste the delicious and fresh seafood dishes such as salad jelly, squid, and shrimp... in local people’s houses.