How to travel from Hoi An to Mui Ne

Hoi An is one of the best cities in Vietnam while Mui Ne owns one of the best beaches in the country. Both destinations are incredibly popular to local and foreign tourists thanks to the splendid coastline and delectable cuisine with fresh seafood and world-renowned delicious sandwich. Therefore many travelers want to visit both cities and enjoy the best that they can offer. Read along to find out the options to travel from Hoi An to Mui Ne and which is the possible way to add to your travel plan. 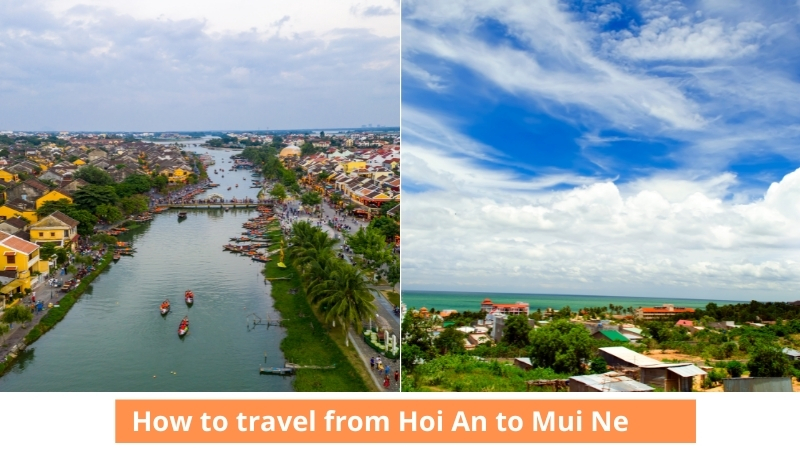 Mui Ne has become a well-known tourist destination in recent years so it is still developing to adapt to the tourism demands. Due to lack of infrastructure as well as site conveniences, Mui Ne does not have its own airport and train station. Therefore, to travel from Hoi An to Mui Ne you have to travel by bus that takes you directly to Mui Ne or getting on a train from Da Nang to Muong Man train station (now called Binh Thuan train station). From there, taking a taxi or local public transport to get to Mui Ne. 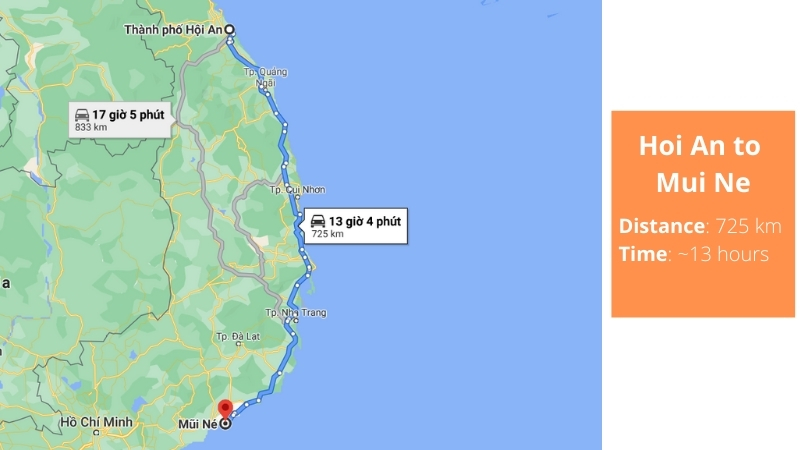 Hoi An to Mui Ne By Train

The train is more comfortable and safer than using the bus. However, this is not the best solution. You need to buy a train ticket from Da Nang to Binh Thuan railway station. It takes 45 minutes to get from Hoi An to Da Nang, and around an hour to travel from Binh Thuan to Mui Ne. Following are the detailed stages of how to get to Mui Ne from Hoi An by train.

Normally, there is various way to travel from Hoi An to Da Nang railway station such as local public bus, a motorbike, shuttle bus, private car or taxi. Depending on the train schedule, you can pick one suitable option.

If you are planning to take the evening train that departs from Da Nang train station at 11:53 PM, you can only get to the station by taxi or arranged private car. The easiest and quickest way to get to the train station is to take a cab. From Hoi An, you should travel by Faifoo Taxi (0235.391.91.91), Mai Linh Taxi (0235.383.83.83), or VinaSun Taxi (0511.368.38.38). These are reputable taxi brands that you can be ensured to travel with. You can travel to spots where they gather, such as the corner of Le Loi and Tran Hung Dao, and catch one or simply ask your hotel receptionist to call one of those above for you.

Traveling by motorbike is still able to do, especially if you rent the bike when you first arrived at Da Nang. But we are not recommended to do so as driving at night will affect badly to your safety.

There are two trains from Da Nang to Binh Thuan train station that are still operating, but some of them may not convenient options. Following are the schedule and price for each type of train:

Binh Thuan Railway Station, also known as Muong Man Train Station, is the province's principal train station, and it is where most trains from Ho Chi Minh City, Hanoi, and other Vietnamese locations arrive. Previously, there was no public transportation available at Binh Thuan Railway Station, but that has changed now that Mui Ne Bus 9 stops at the T-junction (Ng 3 Chùa) near the railway station.

The Mui Ne Bus 9 route usually begins at Phan Thiet Railway Station. However, in January 2020, the line was temporarily extended, and it currently connects Mui Ne and Phan Thiet City to Ham Hiep commune, Binh Thuan Railway Station, and Ham Thanh. This route extension has no set end date, but it may become permanent.

Mui Ne Beach is around 30 kilometers from Binh Thuan Railway Station, while Mui Ne Town is roughly 40 kilometers from the train station. Mui Ne Bus 9 currently departs from Ham Thanh and stops at Binh Thuan Railway Station before continuing on to Suoi Nuoc through Phan Thiet City, Ham Tien, and Mui Ne. Tickets for Mui Ne Bus 9 can be purchased onboard and they only accept the payments in cash. The price of a bus ticket is determined by the distance traveled so expect to pay 45,000 VND ($1.9) per person for the journey from Binh Thuan Train Station to Mui Ne. 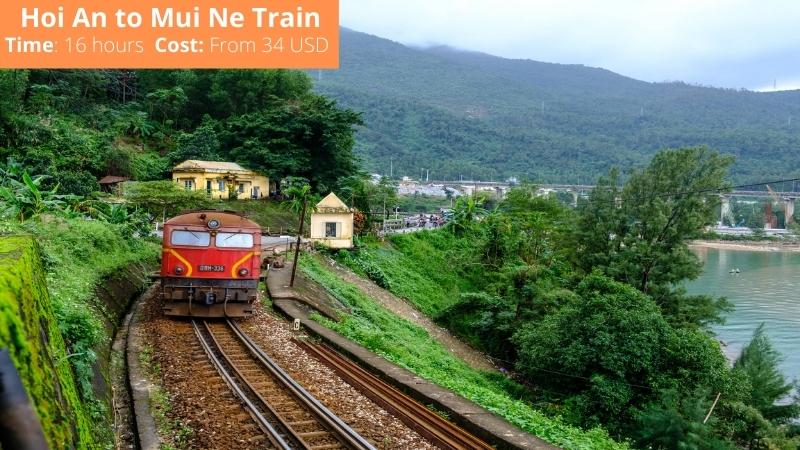 Hoi An to Mui Ne by Bus

Although the bus is neither the fastest nor the safest means of transportation, it is significantly more convenient than taking the train. There are several buses that will take you directly from Hoi An's central to Mui Ne's central bus station. This bus from Hoi An to Mui Ne comes with a variety of features. Once you've boarded, you'll have access to A/C, reclining seats, a blanket, and food and beverages.

Among the bus operators serving the southern routes, Hanh Cafe Company and The Sinh Tourist are the most popular bus company. Thousands of customers have been served by the Hanh Café Company along the highways from Saigon to the southern provinces. Many clients trust the quality of Hanh cafe cars, and many tourists choose them as their first choice. While the Sinh Tourist runs across the country and receives much more compliments for being reliable and providing good services from passengers than other bus companies.

The journey from Hoi An to Mui Ne center by bus will take 14 to 16 hours and since they make a stopover in Nha Trang for about 2 to 3 hours so that will add to the travel duration up to 17 to 18 hours. This could be annoying somehow yet on the bright side, you have got a chance to stretch your legs after a long trip and even have breakfast in Nha Trang.

The bus has the advantage of transporting you from Hoi An's city center to Mui Ne's city center; however, it is a long and tiresome journey that is not as safe as the train. Please kindly note that there are no online tickets available for this route and the schedule might change in the future. 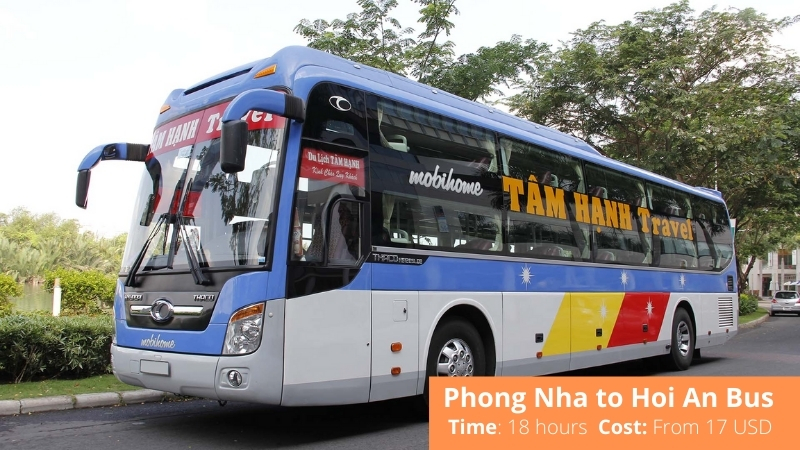 Overall, there always be a way to travel from place to place, especially from Hoi An to Mui Ne, you just need to stretch your travel time a little bit longer but we ensure that it is absolutely worth it. Visit BestPrice and join our Vietnam tours to travel to the best destinations that take you beyond your imagination.

Recommended Itinerary for 3 Days in Hoi An

How to travel from Hoi An to Da Nang? 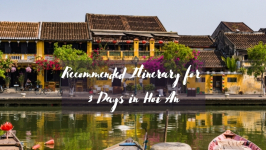 Recommended Itinerary for 3 Days in Hoi An 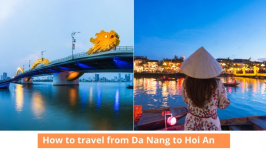 How to travel from Hoi An to Da Nang?

Twinkle Hoi An Town At Night

Tips for Shopping in Hoi An

Traveling tips in Hoi An

10+ Amazing Vegan Restaurants in Hoi An

Hue to Hoi An Train: A Completed Guide