Myanmar is considered as the “Land of Festivals” because of its numerous celebrations each year and Kachin Manaw Festival is absolutely a highlight. It is annually held at some places in Kachin State in January, drawing hundreds of thousands of revellers from the seven tribes that make up the Kachin ethnic group. The Kachin people are a diverse group of hill tribes that inhabit the northern reaches of Myanmar. While most of Myanmar’s varying ethnic groups have long histories as Buddhist devotees, the Kachin peoples have retained much of their ancient animist tradition

The festival celebrates the New Year, victory in battles, and the reunion of the tribes or commemorates the death of the older people among the Kachin people. During the festival, the villagers decorate a series of pillars in colourful Kachin motifs called Manaw Poles. Manaw Poles are about 20 meters in height and are normally in red, black, and white. 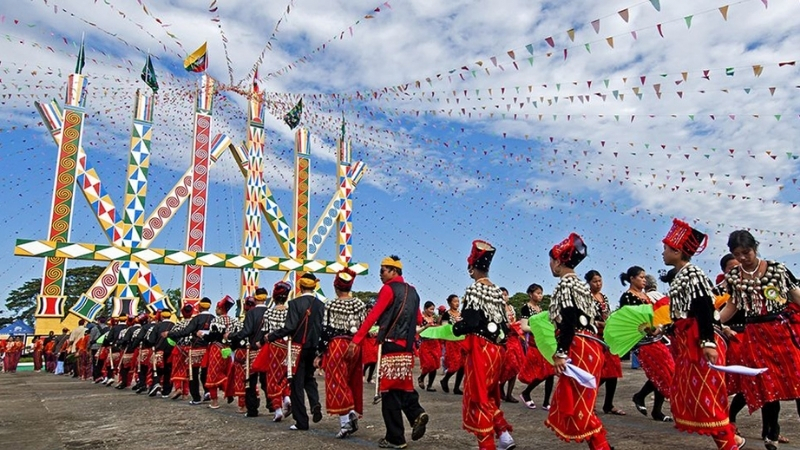 Villagers will put them in the middle of the festival ground. Everybody will wear their best traditional costume which is embellished with metallic objects and spiritually dance around the erected Manaw poles. The dancing during this festival was led by loud drums and community leaders. The girls wear red skirts and velvet jackets in black while the boys wear woven shoulder bags and a silver sword in a sheath.

The festival is also the place where the youngsters meet and fell in love. It is a delicate and moderate group dance without contacting even of the fingertips. The girls wave handkerchiefs and the boy might be permitted to hold the other corner: he can't get nearer than that. The Jingpaw ladies wear red skirts and dark velvet coats hung with bosses of silver. Their silver wears are complicatedly made and passed on from one age to another.

Like other festivals in Myanmar such as Thingyan Festival, Kachin Manaw Festival provides meals for everyone. The dishes include rice, rice wine, buffalo, pork, beef, and chicken.

Kachin Manaw Festival is held in Myitkyina & Putao, Kachin State. Kachin is the northernmost state of Myanmar, located about 1,480 kilometres from Yangon and 785 kilometres from Mandalay. This place is famous for the highest mountain in Myanmar, Hkakabo Razi, and a huge inland lake, Indawgyi Lake. Tourists can combine visiting the beautiful landscapes, mountain ranges, and flower fields and joining Kachin Manaw Festival, watching the most famous displays of the ethnic culture here.

There are 2 options to get there. 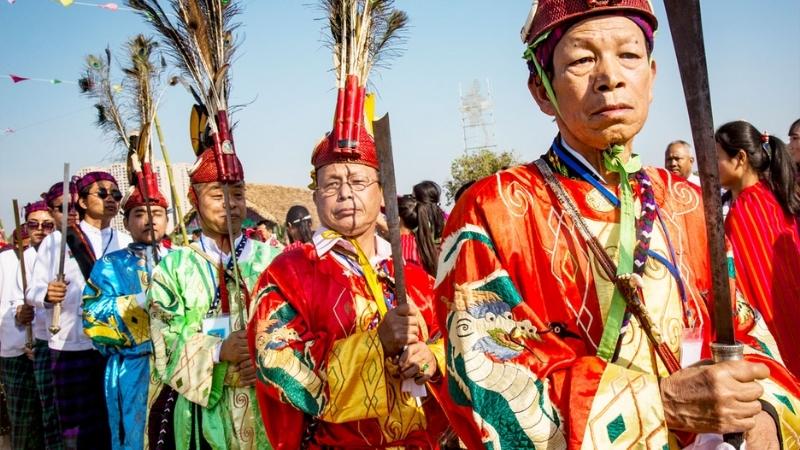 How to dress in Kachin Manaw festival

This festival is one of the most delightful and popular festivals in Myanmar. If you visit in January then do attend this festival. It is also an ideal time to visit the Himalayan foothills nearby. Let's looking for suitable Myanmar tours to join now.