Being unique among other Royal tombs in Hue, the Nguyen Emperor Khai Dinh’s royal tomb is an interesting attraction for tourists who look for historical and cutural values

While other royal tombs are expansive and invite respecful reflection, Khai Dinh’s royal tomb is monumental in style and bombastic in execution.

At lowest level, the tomb looks gray and imposing with modern materials like concrete and wrought iron. Despite Eastern affection during the period, the tomb’s details show a large dollop of Western influence. It is told that Khai Dinh once visited Marseilles Colonial Exhibition in France in 1922 and fell in love with the European style. Hence, the tomb design is quite interesting in comparison with other tombs. 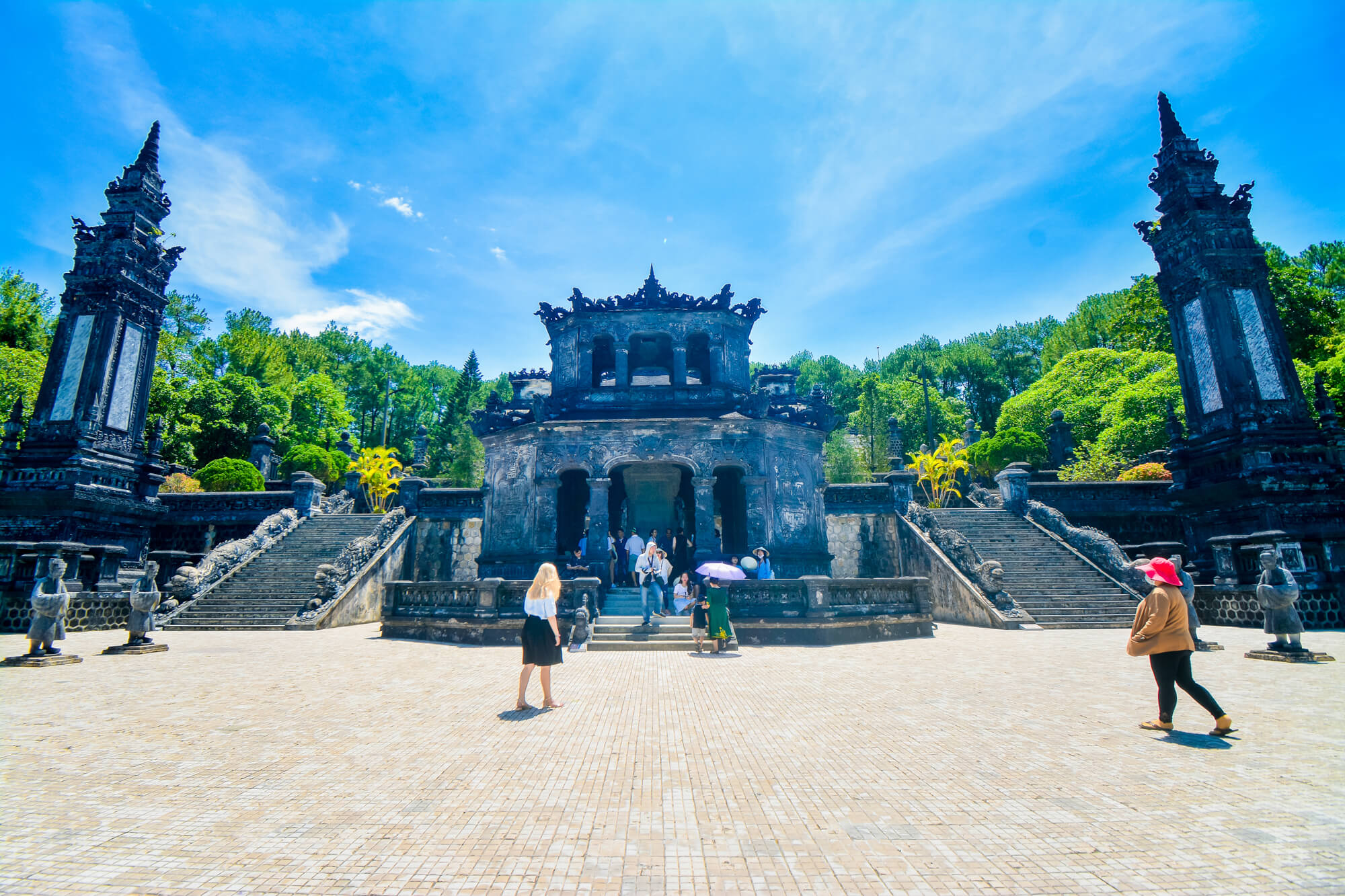 Khai Dinh was the penultimate Emperor of Vietnam from 1916 to 1925. Constructed in 1920, the tomb was still incompleted when Khai Dinh passed away with tuberculosis in 1925. His son, who is also the last Emperor of Vietnam Bao Dai, continued his legacy and finally finished the construction of Khai Dinh’s tomb in 1931. It took 11 years to complete such a magnificent tomb.

Rumour has it that Khai Dinh’s tomb was purposefully designed to be difficult to visit. Built on the side of a mountain, the tomb’s inner sanctum is 127 steps up, which is a pity for the court officials who were required to serve the late emperor. The steps leading to the honour courtyard are the result from a mixture of Vietnamese and European features. Similar to other royal tombs in Hue, you may meet the Honor Guard Formation on the Forecourt – an honour guard of stone bodyguards, mandarins, elephants, and horses. In the middle of the forecourt stands the octagonal stele pavilion, in which commemorates Khai Dinh’s life and accomplishments. 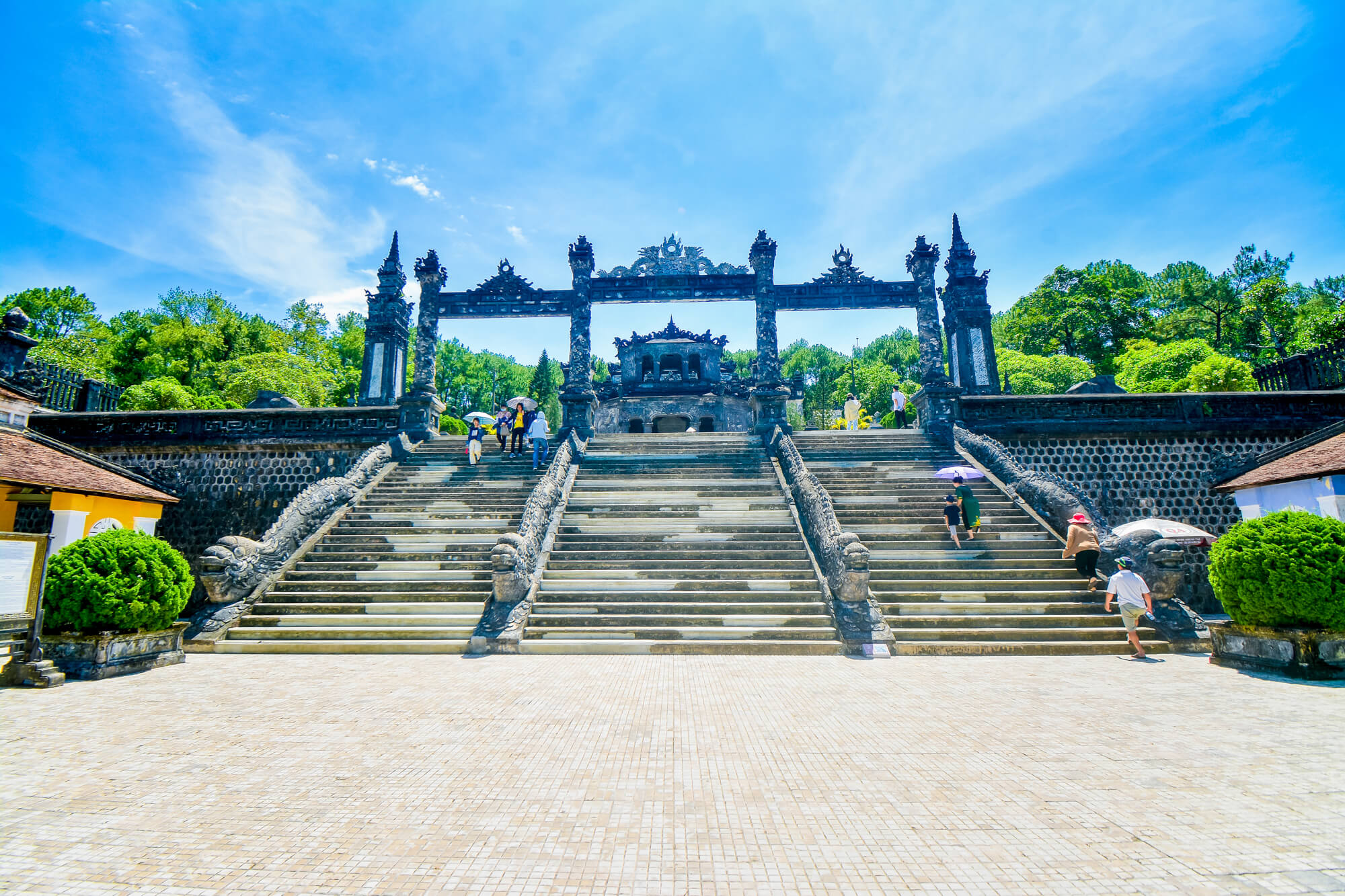 Khai Dinh’s tomb main building is called Thien Dinh Palace, in which locates Khai Dinh’s gilt bronze statue. The walls and ceiling are decorated with a large painted picture of 4 seasons, 8 precious objects and 8 faries. Travelers often feel amazed by the ceramic mosaic that makes up the walls in middle row of Thien Dinh Palace, which are riot of color and texture, the type that can be found nowhere else. Khai Dinh’s personal things are also exhibited here, including a gold chair, photographs of his lifetime, ... 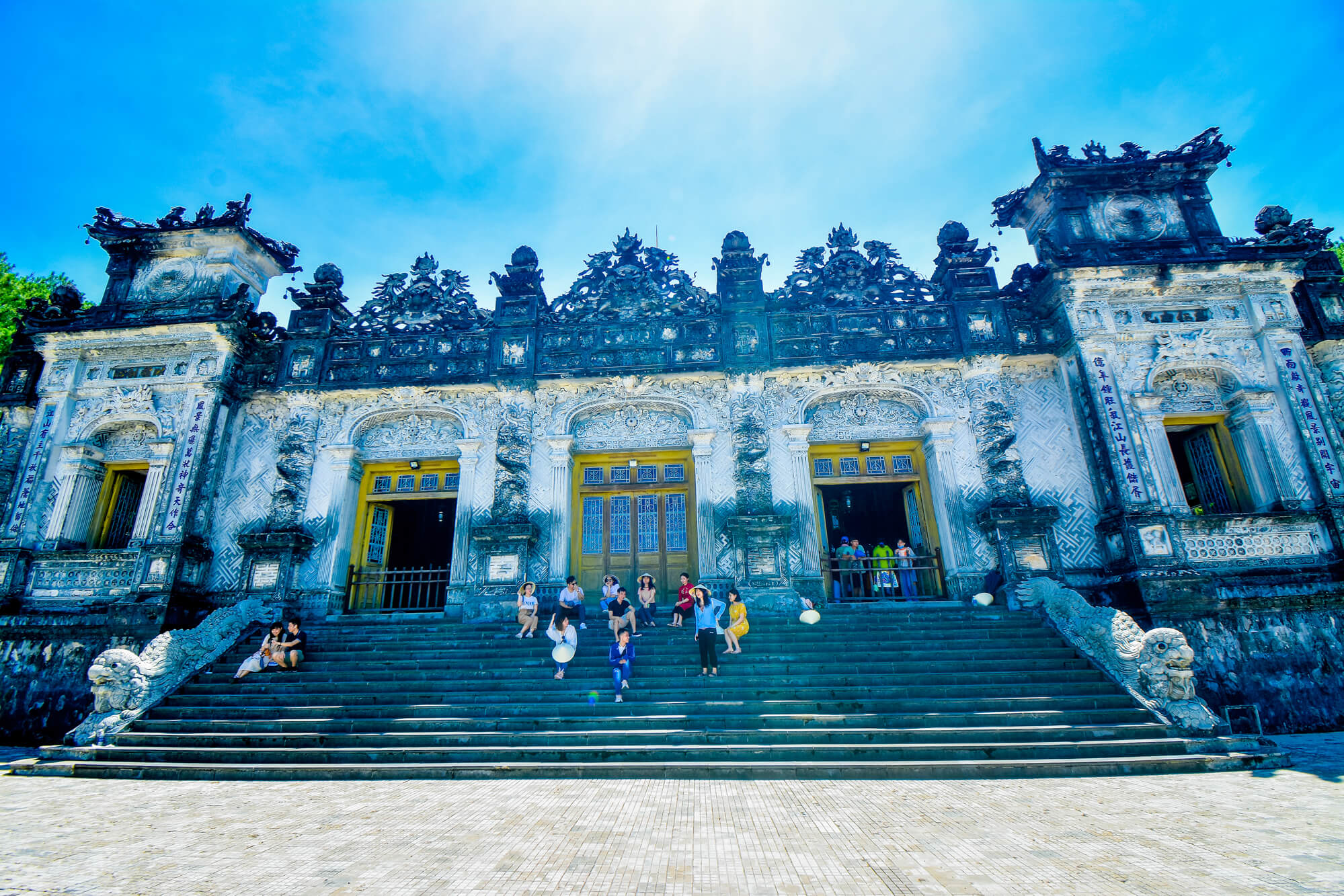 Located only 10km from Hue, in Chau Chu village, Khai Dinh’s tomb can be reached by tours, xe om (motorbike taxi), cyclo drivers from Hue center. The tomb is opened from 8AM to 6PM and required an entrance fee at about $7. It is suggested for tourists to come during sunny season (April to September) to avoid rainy weather from October to March. And don’t forget your comfortable shoes since the 127 stepped climb is not as easy as it sounds.

Other attractions in Hue