Mr. Kiet Old House is one of the solid old house, which were built before the French colony period and were still preserved until now in Cai Be. With the old architecture typical in the region and many antiquities, the old house reflects lively the everyday life and old architecture of upper class at that time.

Mr. Kiet house was located in Cai Be District and was built approximately in 1838. After more than 150 years, only the main architectures of the house remained. In 2002, a Japanese association, JICA funded more than 1.8 billion for repairing the house, and sent a Japanese architect to this house to monitor the work for more than 6 months. Hence, the entire architecture and decorations of the traditional house was restored similar to its original design. 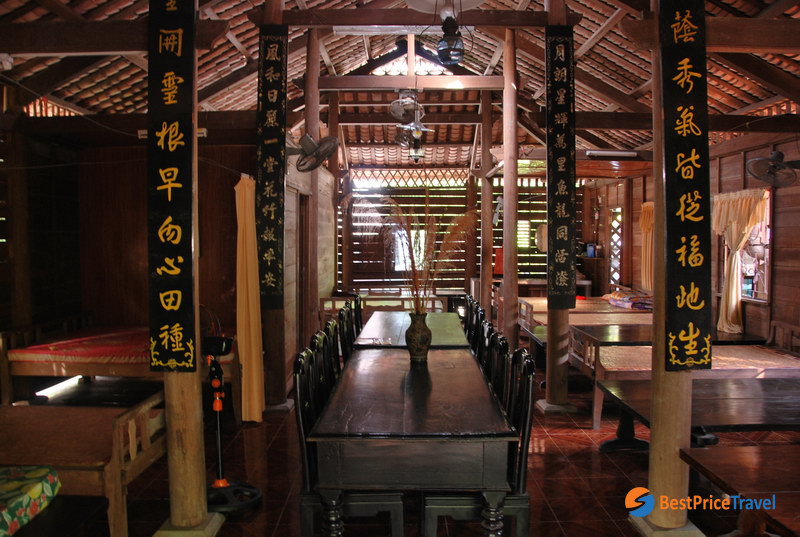 The house accounts for 1000m2 and located between 1.8 ha orchard. The house was divided into 5 parts with more than 100 wood pillars. Both its design and furniture in Mr. Kiet old house was built and arrange as the traditional structure of the South.

The pattern decorations were carved meticulously on the rafters and walls. That brings the distinctive style of the upper class of the South. Ms. Chinh, wife of Mr. Kiet, shared that in the past, her father in law has a hobby is collecting antiquities. Therefore, until now there is a range of antiquities and priceless ceramic products were displayed in the traditional old house. Moreover, he spent a lot of money for hiring the best architects from Hue centre to build and design the house during many years.