Mandalay Hill is one of the must-go attraction when you arrive at Mandalay, Myanmar. The hill is located at the north east of Mandalay central city which took its name after this hill also. With the summit of 230m above the surrounding plain, Mandalay Hill is like a natural watch tower of Mandalay region.

The Mandalay Hill is situated to the north-east corner of the Mandalay Royal Palace. It lies from the north to the south, and its altitude is estimated around 236.5 metres above sea level and its height is going up to 167 meters.

There are two stairways to the southern. The easier path starts between two giant Chinthe statues, a kind of mythical hybrid creature of lion and dragon, with 1729 steps. And there is another alternative southeast stairway that is better for glimpsed views but harder to climb. These two routes converge at a shrine housing a large statue of a standing Buddha, whose arm points towards the royal palace. 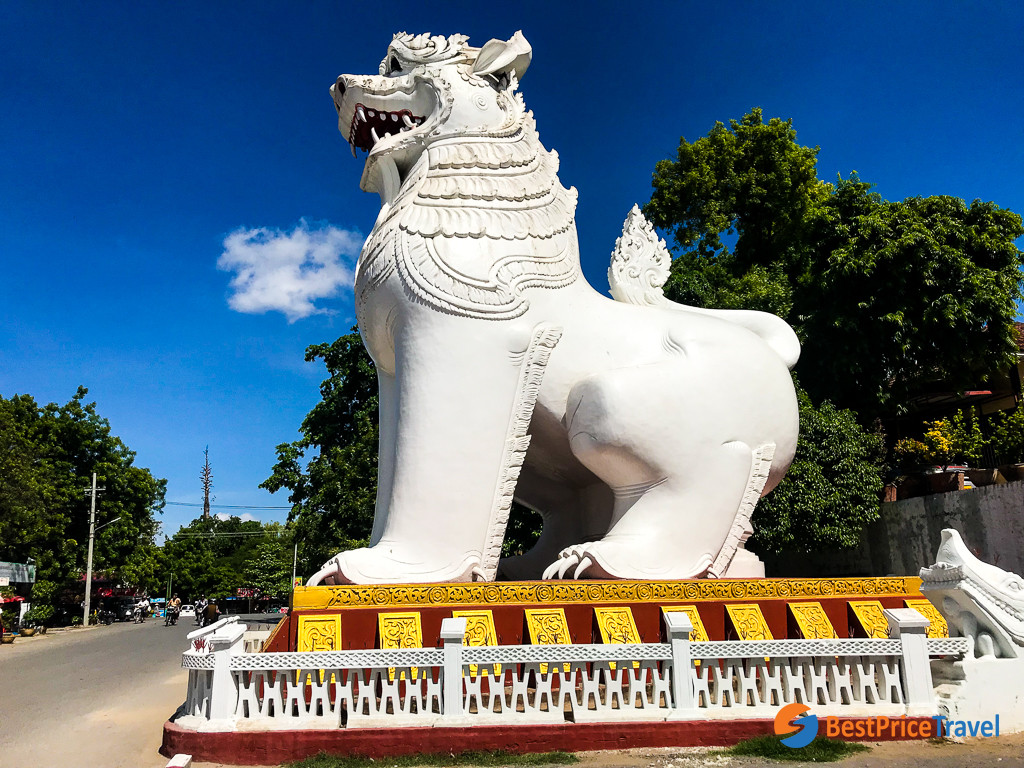 The giant Chinthes are guarding the gates

This scene refers to a legend in which the historical Buddha, accompanied by his disciple Ananda in the climb on the Mandalay Hill, prophesied that after 2400 years a great city would be founded below. Eventually, King Mindon did move the capital city to Mandalay in 1857. Further up, there are windowless ruins of a three-storey stone fortress behind Myatsawnyinaung Ordination Hall. Near the summit, on the eastern side, there is a statue featuring ogress San Dha Mukhi offering her breast. Legends told that she was once the ruler of Mandalay Hill until the Buddha came. When the pilgrim brings offerings to the Buddha, she had nothing to offer so she sliced off and offered a breast of her to the Buddha for a request of becoming King of Mandalay. Moved by her act, Buddha agreed and later let her reincarnate into King Mindon as mentioned earlier. There are also two steeper stairs at the north and the west of the hill.

Mandalay Hill is known for its abundance of pagodas and monasteries, and has been a major pilgrimage site for Burmese Buddhists for nearly two centuries. At the top of the hill is the Sutaungpyei Pagoda. A panoramic view of Mandalay from the top of Mandalay Hill makes it worthwhile to attempt a climb up its stairways. One of the best things on top of the hill is the magnificent sunset view of the city and the surrounding landscapes from there. In the afternoon, the hill will be crowded by the foreigner enjoying sunset and the monks and local people converging here to meet and practice English with visitors.

Views of lake, mountains, temples and pagodas from Mandalay Hill

If using the southern stairs to reach the top of the hill, tourists must walk on bare feet for 1729 steps. You can also use buses and taxis or mazda pick-ups to reach there by the other routes. There are a lift and escalator to use but both are usually broken so you still have to walk for the last five minutes. Up there, tourists can enjoy the panoramic views of Mandalay and its adjacent attraction from there like Sagaing Hill, Ayeyarwady River and Mingun in the west; Yankin hill, YaeTa Khun Hill in the east. Tourists can pay homage to several prominent pagodas on the hill such as Sutaungpyi pagoda on the top of the hill, Sandamuni pagoda and Kuthodaw pagoda at the foot of the hill. 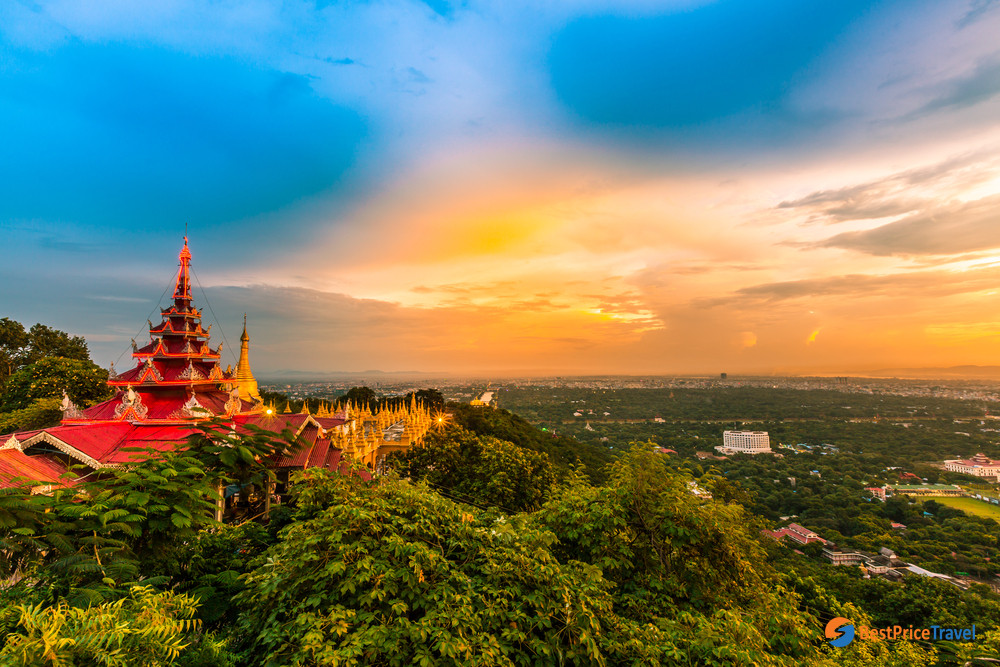 The ideal time to visit this play is from November to the upcoming February when the weather is dry and nice. If you decide to walk on the southern stairs, remember to bring a bag to keep your shoes, wet paper towels and enough drinking water.