The Museum of Fine Arts was begun to be constructed in 1929 and inaugurated in 1934. This construction was designed by Mr. Rivera, a French architect, and follow the style of Asian and European architecture. The owner of the building was a Chinese-born businessman named Hua Bon Hoa, one of the wealthiest traders in South Vietnam in colonial times. He was also the owner of many other constructions such as Tu Du Hospital, Majestic Hotel, and Emergency Center of Ho Chi Minh City.

Through different periods of time, the owners of the construction changed. However, the architecture remains its antique appearance and embellishes the general development of Ho Chi Minh City. The construction was converted into Ho Chi Minh City Museum of Fine Arts by the City People’s Committee in 1987. However, it only went into operation until 1992 when there were more sculptures, paintings, and artifacts to be displayed.

At the beginning of its foundation, a room in the museum was rented by the wife of a famous artist and turned into a platform of contemporary art. The room held various workshops, exhibitions, and performance events in the following years. 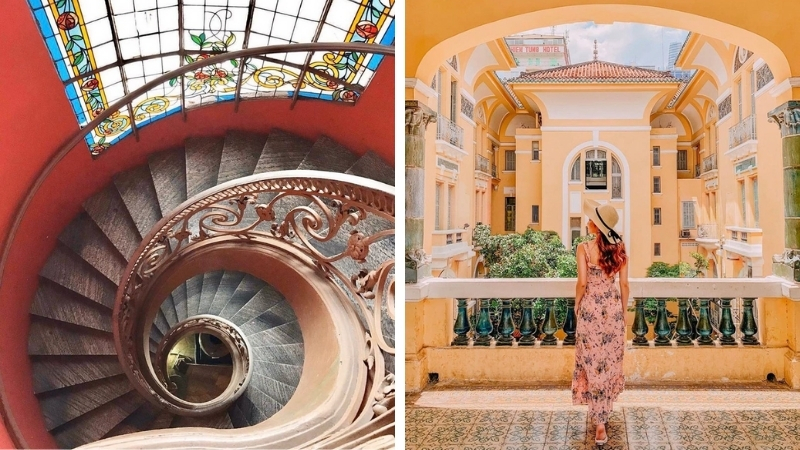 Fine Arts Museum is a three-storeyed construction, built in the style of Art-deco architecture, an architectural style that harmonizes the most quintessential values ​​from the Asian and European fine arts schools. You can easily see the Chinese design in the elevators, which was decorated like an ancient Chinese palanquin, or the red-tiled rooftop which was in the Yin and Yang style. Moreover, European art appears in colorful glass windows and many other details.

The main building is yellow with arched window pivots in the middle of the green space. The front is in an archway with two short staircases leading to the main door. There is also a small fountain with two sculptures on both sides in the center. The whole construction is a U-shaped house, and at the rear of the main building is a small courtyard with a lot of sunlight. 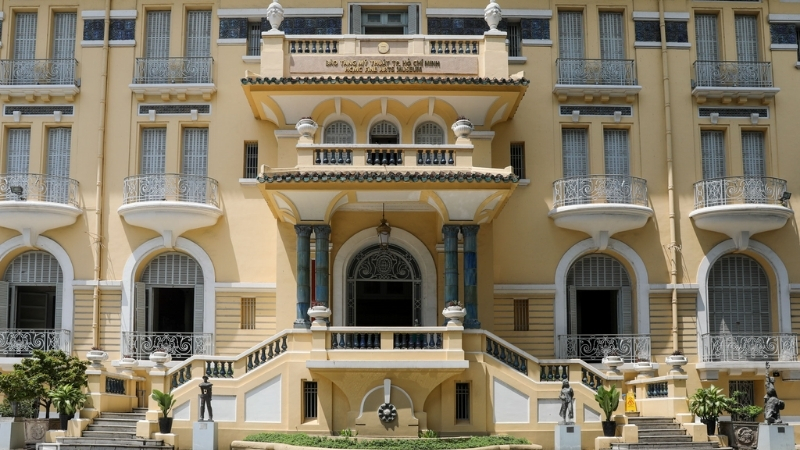 The Structure Inside Fine Art Museum

The basement is used for office works, the first floor is for galleries, exhibitions, and trade activities, the second floor displays the fine arts paintings, and on the third floor, you can find the antique sculptures and traditional handicrafts of the ancient residents in South Vietnam.

The highlight of the entire architecture is in the main entrance path on the first floor with a high lobby, large pillars, and stairs on the two sides, the main door designed in the arch shape, the back of the museum which is a stele engraved with the names of the owners of this building.

Visitors of this museum are also impressed with the long corridors inside the museum lead to gallery rooms, a green wooden door that leads to a small balcony in each room, the especially design that makes the interior of the Fine Arts Museum full of natural light. Other like the main yellow corridor where you can walk along, the gray walls and windows, and the red color. All the colors blend in harmony and draw a lively painting of architecture inside the museum. 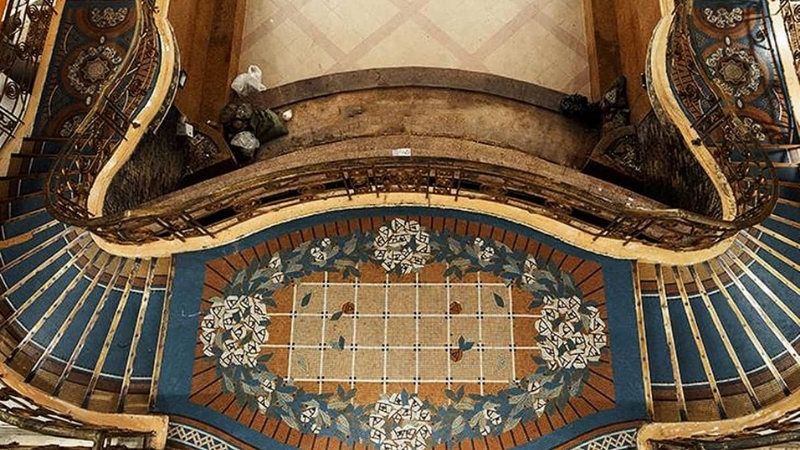 The Structure Inside Fine Art Museum

What to see at Ho Chi Minh Museum of Fine Arts

The Fine Arts Museum displays documents and typical objects belonging to fine arts, especially typical artworks in the South of Vietnam. Visiting the museum, you can see many artifacts from ancient times to the present.

Contemporary art in the museum is divided into two periods of time: from the beginning of the twentieth century to 1975 and from 1975 to the present. Here, you can find a number of modern paintings by famous artists in Vietnam such as Nguyen Gia Tri, Diep Minh Chau, Do Quang Em, and Trinh Cung, as well as in the world in these two periods of time. The paintings and sculptures are mostly about the daily life of Vietnamese people as well as the beauty of famous landscapes of Vietnam. 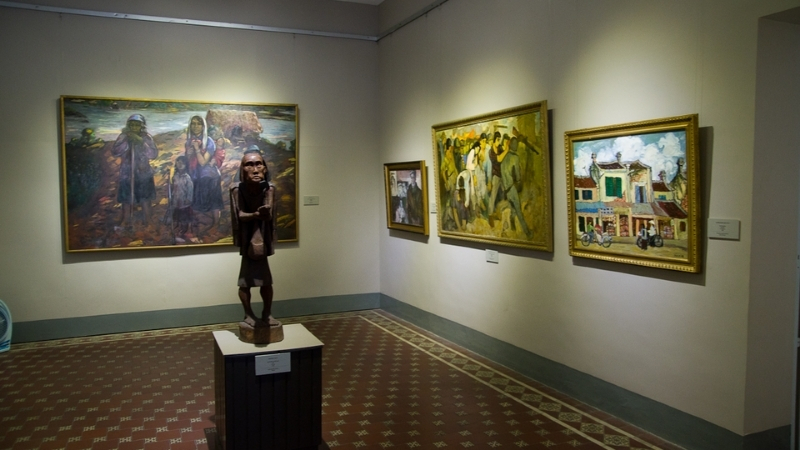 Saigon was only discovered at the end of the 17th century, then it became the meeting point for the Chinese immigrants and the Vietnamese and Khmer locals. Immigration contributed to the expansion and development of handicraft activities. With creative minds and skillful hands, immigrants here soon utilized the abundant sources of clay to make ceramic products that adapted to the demands of local residents at that time.

The traditional ceramic industry develops and survives through the history of Vietnam, especially under Under the Ly Dynasty (1010 – 1225), the Tran Dynasty (1226 – 1400), and the Le Dynasty (1428 – 1527). The pottery industry can produce many kinds of beautiful and precious ceramic products. These products were imported to many countries in the world. Until the end of the 19th century and the early 20th century, famous ceramic centers in Vietnam such as Bat Trang, Phu Lang, Huong Canh, Thanh Hoa, Binh Dinh, and Bien Hoa had produced many types of ceramic products in different designs, materials, and patterns.

+ The Statues in Tay Nguyen Tombs

Other interesting things to see in the museum are the statues in tombs of the people in the Central Highlands of Vietnam. These statues can be crying people, mother and child, naked men or women, and so on, which are made from very simple tools such as axes and knives. Local people believe that the statues helped to replace people, so the statues in the tomb did nothing but serve the material and spiritual life of the dead. 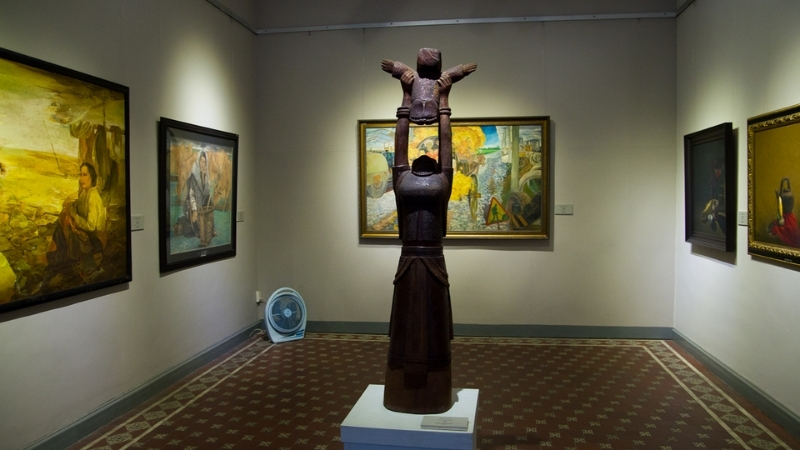 Besides Statues and Sculptures in Tay Nguyen tomb, Champa ancient sculpture is another unique art in the treasure of Vietnamese art heritage, contributing to the multi-religious and multi-ethnic culture. These Sculptures are influenced by the culture, customs, and especially architectural and sculpture art from the religion of India, they then are changed to create the unique and attractive features of Champa style. Popular statues display at the Ho Chi Minh City Museum of Fine Arts are the statues, reliefs, and semi-reliefs of Hindu deities such as the Kinnara statue, the reliefs of Dvarapala and Colossus, the statue of Kala – the monster guarding the temple, the fairy dancer, the architectural artifacts such as altars and pillars. All of them were made of rough sandstone or terracotta, dating from the seventh to the fourteenth century.

Tips for the best visiting experience

There are some minor tips that you should remember when going to Fine Art Museum: