Pakse or Pakxe is the provincial capital and the most populous city of Champasak Province in Southern Laos.  It is a major transport interchange and commercial center for the region.

Located at the confluence of the Mekong and Xe Don River, Pakse which means 'mouth of the river' is sandwiched between Thailand and Vietnam borders. Pakse is the gateway to the Bolaven Plateau, as well as to the southern provinces of Laos like Salavan, Sekong, and Attapeu.

After the foundation by the French colonialists in 1905, Pakse served as an administrative outpost and the entrance to the South of Laos. Today, Pakse is still under the influence of colonial style. With the population of around 120,000 residents, the town is home to mostly ethnic Chinese and Vietnamese. As a result, the town offers plentiful dishes of Thailand, China, India, Western and Vietnam along with Lao cuisine. 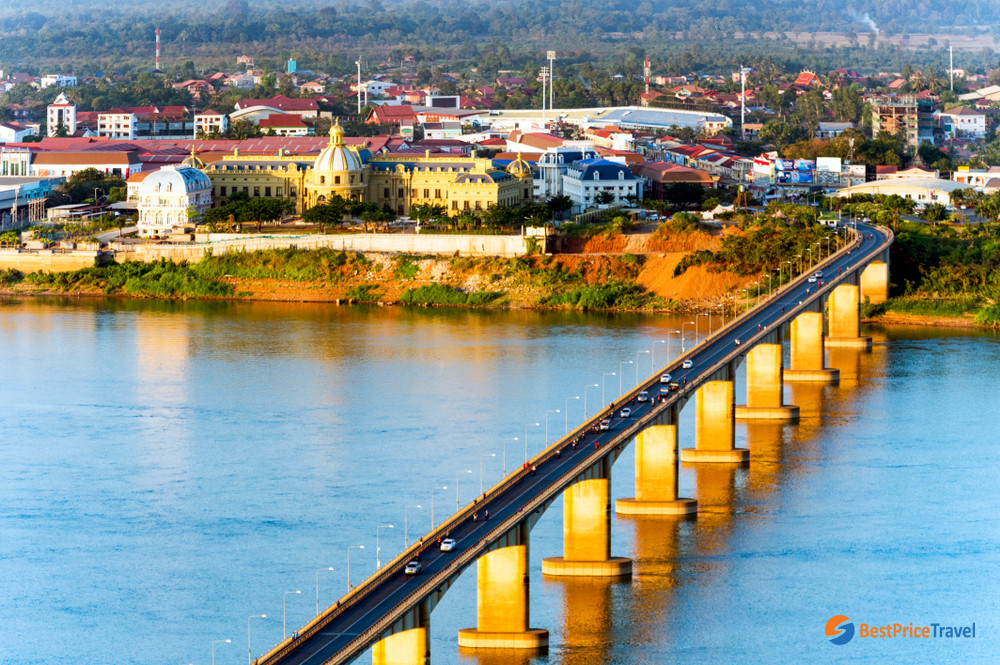 Other than a growing list of to-do day trips departing from this town, Pakse itself might steal visitors' time with its hospitality locals, ubiquitous riverside restaurants and bars and numerous massage clinics. Considered as the highlight of southern Laos, the town still retains its laid-back charm and offers a pretty backdrop to the dusty streets. 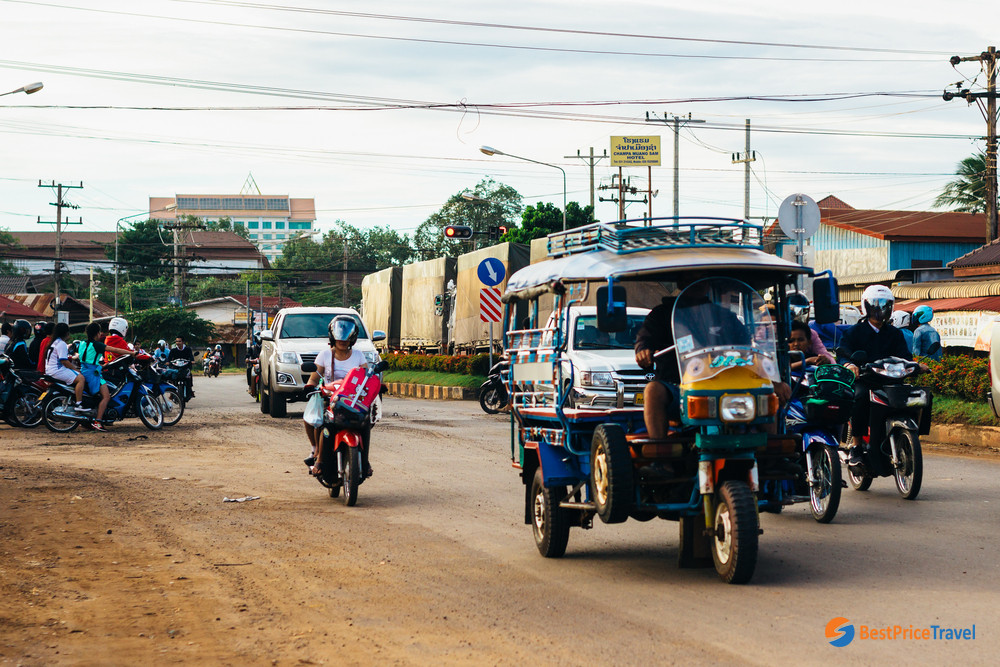 The streets in Pakse town

Pakse is home to numerous stunning sites including the Mount Phou, which can be reached by an elephant ride; the Wat Phu, the charming Khmer Hindu temple complex and the Pakse’s most captivating temple Wat Luang in a multi-coloured complex. Besides, you can savor some of the world’s finest coffee on the visit to the fertile Bolaven Plateau or explore 4,000 islands in Si Phan Don complex. Beyond, Pakse is a great base for pleasant atmosphere, friendly locals, pretty minority villages and floating eateries overlooking the city’s temples. 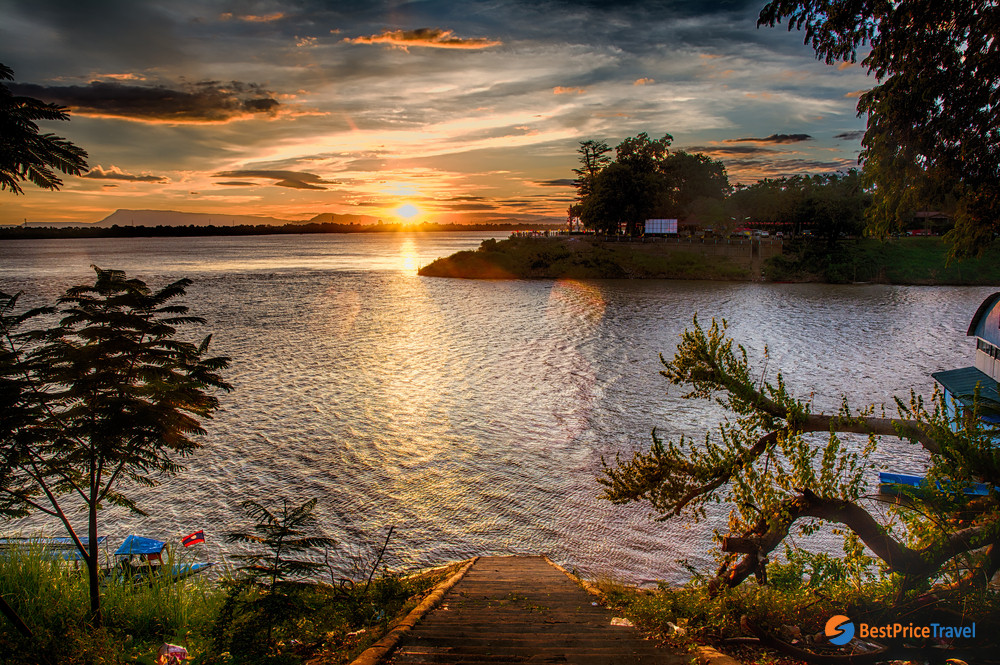 Beautiful sunset over the Mekong River in Pakse

Pakse nightlife is quite vibrant with a bunch of rustic and laid-back bars. Outstandingly, many hotels have rooftop or pool bars offering panoramic views of the town centre. For those engaged in shopping, check out Champasak Plaza or Pakse markets to pick up a local handicraft, weaving silk or anything made by ethnic groups.

Pakse has a tropical savanna climate with warm temperatures throughout the year. The dry season starts from November to March with the lowest amount of precipitation around early January. By contrast, there is a distinctive wet season in the months between April and October, when it’s most likely to rain in September. The hottest time of year in Pakse is the month of April with an average temperature of approximately 30°C. The coolest time of year is in December when it is on average approximately 24°C. 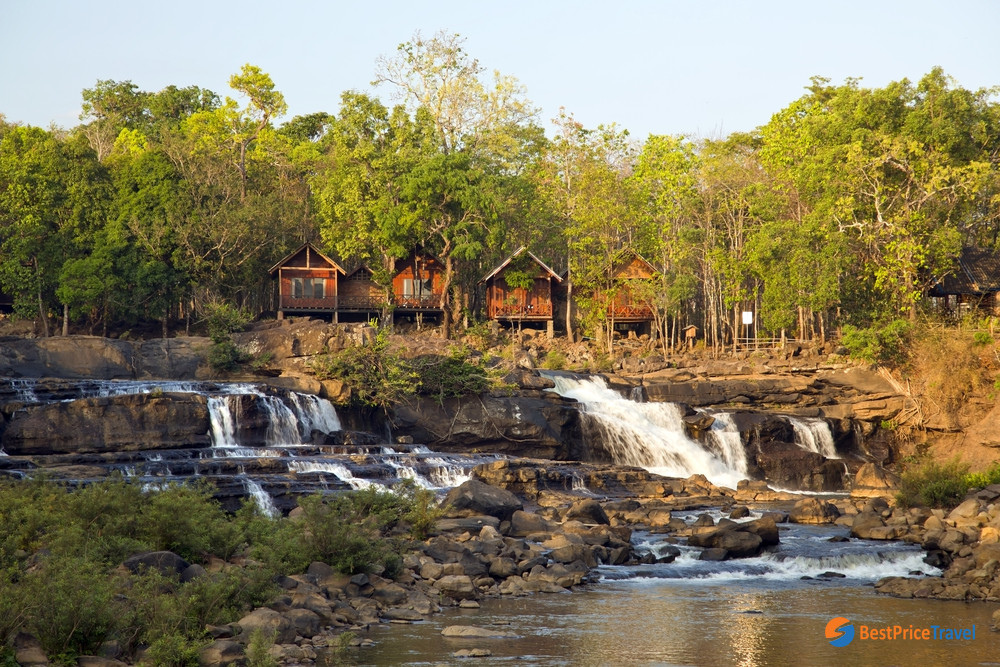 The laid-back village waterfall in Pakse

Getting to Pakse varies from airway, waterway to roadway. To the destination of Pakse International Airport, Lao Airlines offers regular flights from Vientiane, Siem Reap, Savannakhet domestically and from Bangkok, Ho Chi Minh regionally. The other convenient way is to book a private charter shared among 6 people with luggage due to the lack of public boat services. However, the cost could be up to US $250 which is much more expensive than air services. Finally, buses must be the most affordable expense if you travel between Pakse and Vientiane.

Other attractions in Pakse