Phaungdaw Oo, the largest temple in the area of Inle Lake, was built on a small island in the southern town. This is a place that every tourist must stop by its unique point rated as 1 of the top 10 most sacred pagodas in Myanmar.

Phaungdaw Oo, the largest temple in the area of Inle Lake, was built on a small island in the southern town. This Buddhist temple worships five small Buddha statues, which were originally brought to the lake by King Alaungsithu. The Buddha image is now covered with gold leaves and turned into five golden statues, impressing tourists from afar. 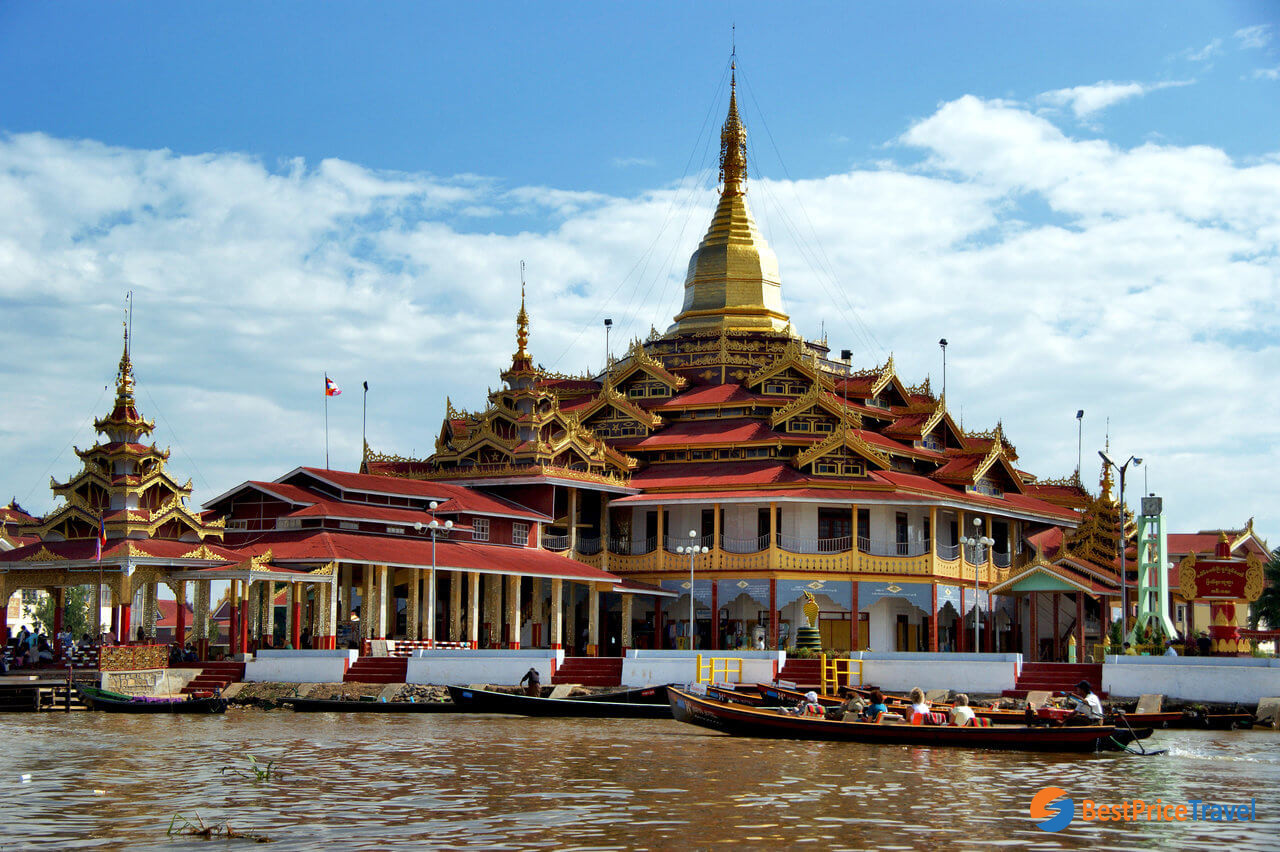 The Phaungdaw Oo Pagoda on riverside of Inle Lake

The major tourist season of the Phaungdaw Oo Pagoda is from the last week of September to October, when the locals celebrate the Phaungdaw Oo festival. This is the most important and typical festival of Myanmar in general and Phaungdaw Oo in particular, occurring within 18 days. With the aim of worshipping Buddha, Phaung Daw OO Pagoda Festival is organized with two main contents: the procession of Buddha statues around the villages of the Inle Lake area along with the boat racing and some special cultural activities as the second part. Participating in the festival, tourists will witness the procession of the Buddha, moving through all villages in the clockwise direction to form an endless parade of colors. 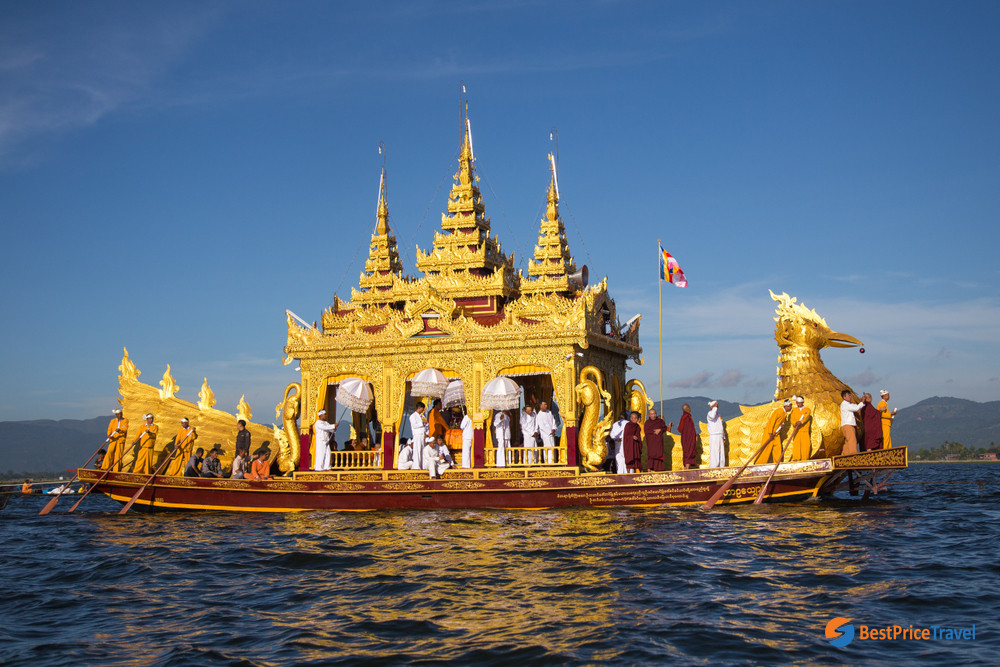 Prominent in the procession is a splendid royal boat symbolizing the presence of royal Karaweik. The boat is elaborately gilded while the head and tail are decorated with the image of the god Hintha in Myanmar myth. The middle of the sanctuary is dedicated to the Buddha image, with three towers on the roof according to the Pyatthat style of the ancient Burmese. Tourists will have an opportunity to immerse in the jubilant atmosphere of the festival, enjoy the traditional dance and Shan music, participate in the festival fair and especially cheer during the boat-racing scene between villages. 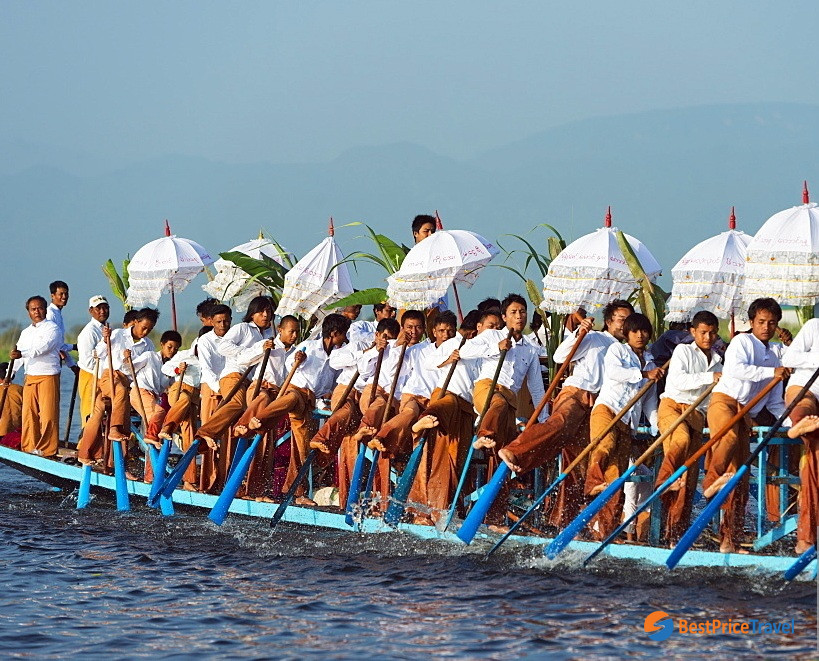 Traveling to many places in the world, perhaps you will not be able to find images of men wearing skirts paddling like in Phaungdaw Oo. Surrounding the temple is the central area of the locals in the area of Inle Lake. The outdoor space behind the temple turns into a "Friday Market" every Friday, more bustling than any usual floating market, where tourists can choose some merchandise as souvenirs for friends and family. 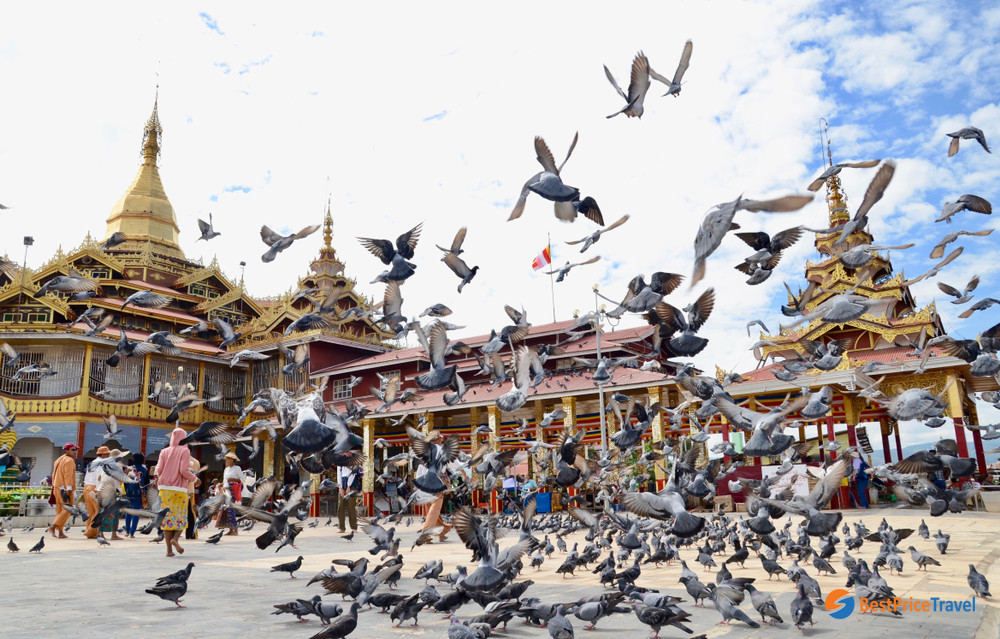 From Mandalay or Yangon, tourists can take a flight to Heho town, near the Pagoda. After a tour around Inle Lake, tourists can stop by Phaungdaw Oo Pagoda by boat. Boat tours are always available upon request at hotels.

The pagoda opens daily from 8am to 6pm and admission is free. It is recommended to visit Phaungdaw Oo during the festival season to fully experience the beauty of the pagoda and the Burmese people. However, it can get really crowded during the fundamental festivals and Buddhist holidays.