Wat Phra Kaew is known as a Royal Temple in Chiang Rai. This is one of the oldest constructions in the city. Although it is difficult to know the exact year the Wat Phra Kaew was founded, it dated back at least to the end of the 14th century.

Wat Phra Kaew is known as a Royal Temple in Chiang Rai. This is one of the oldest constructions in the city. Although it is difficult to know the exact year the Wat Phra Kaew was founded, it dated back at least to the end of the 14th century.

Wat Phra Kaew plays an important role in Thai history because it was here where the Emerald Buddha was discovered in the year 1434 after lightning struck the chedi where it was kept. Phra Kaew Morakot or The Emerald Buddha is the most highly revered Buddha image in the country which is now enshrined in the Wat Phra Kaew temple on the grounds of the Grand Palace in Bangkok.

The origin of the Emerald Buddha is not known certainly. Someone told that the image was created in India more than 2,000 years ago after which was brought to Sri Lanka and then to Cambodia. The image was in Northern Thailand until the end of the 14th century. The King of Chiang Rai decided to hide this image in the Wat Phra Kaew’s chedi that was then known as Wat Pa Yier meaning bamboo forest temple. 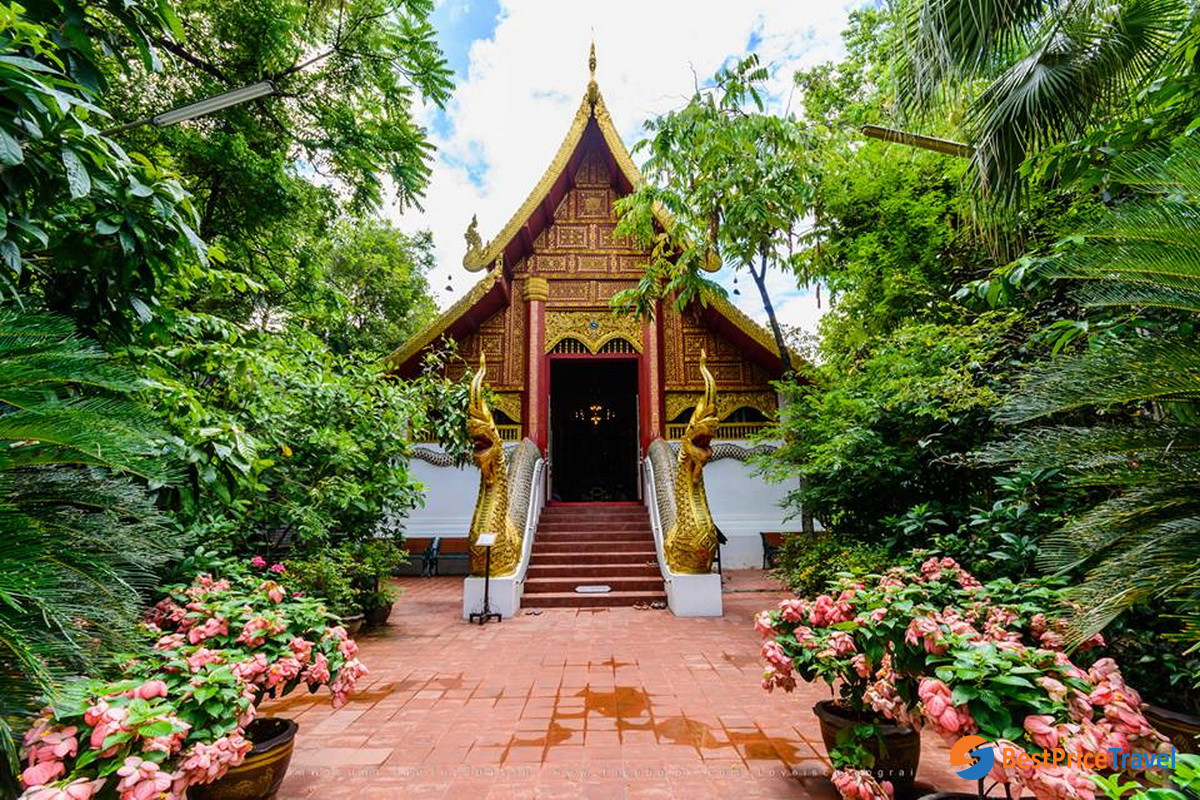 In 1434, within a storm, the chedi was hit by lightning, damaging the building. Some stucco came off in order to reveal the Buddha image. As people believed the image was made of emerald, it is actually green jade, that’s why they named it the Emerald Buddha or with its official name the Phra Kaew Morakot.

The name of the temple was changed to its current name Wat Phra Kaew after that. Not so long after the time that the discovery of the Emerald Buddha King Sam Fang Kaen of the Lanna Kingdom ordered the image to be brought to Chiang Mai - the capital of the Kingdom. The image was transported in a shrine placed on an elephant’s back. However, the elephant had a mind of its own and brought the image to Lampang, in the South.

After three times, the King decided to leave this image in Lampang where it was situated in the Wat Phra Kaew Don Tao temple. A white statue of the elephant that carried the image can still be seen now at the Lampang temple. After that, the Buddha image was moved around a lot until it ended up where it is as present - the Wat Phra Kaew temple in the Grand Palace in Bangkok. 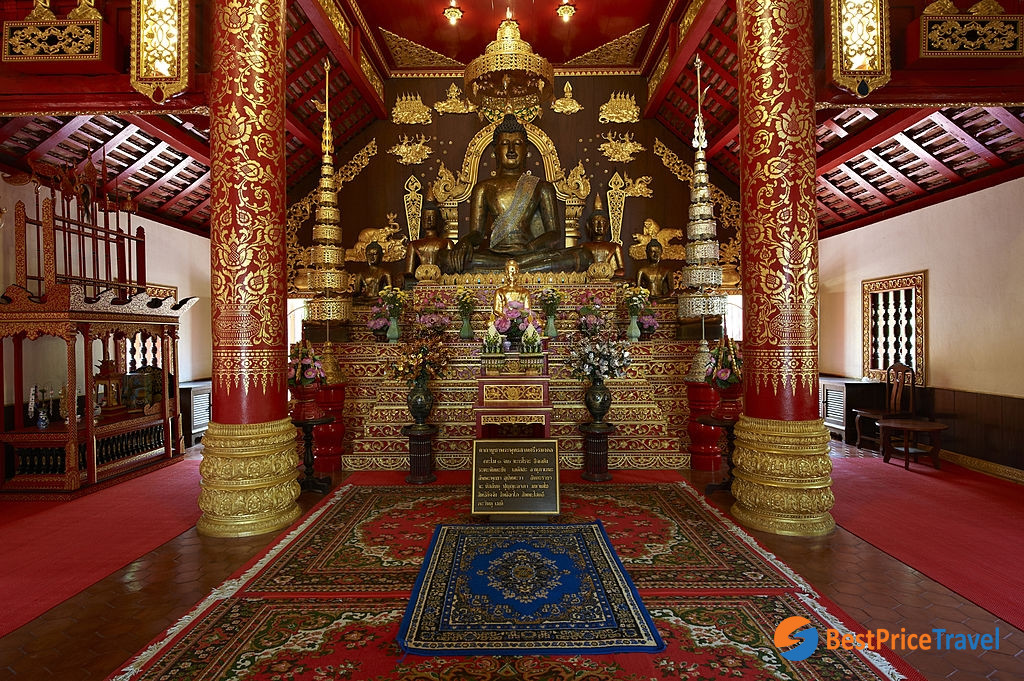 The inside of Wat Phra Kaew

The viharn of the Wat Phra Kaew is a beautiful Lanna structure with its facade made of intricately decorated panels. The relatively small viharn has very intricate eyebrow pediments and a multi-tiered roof. 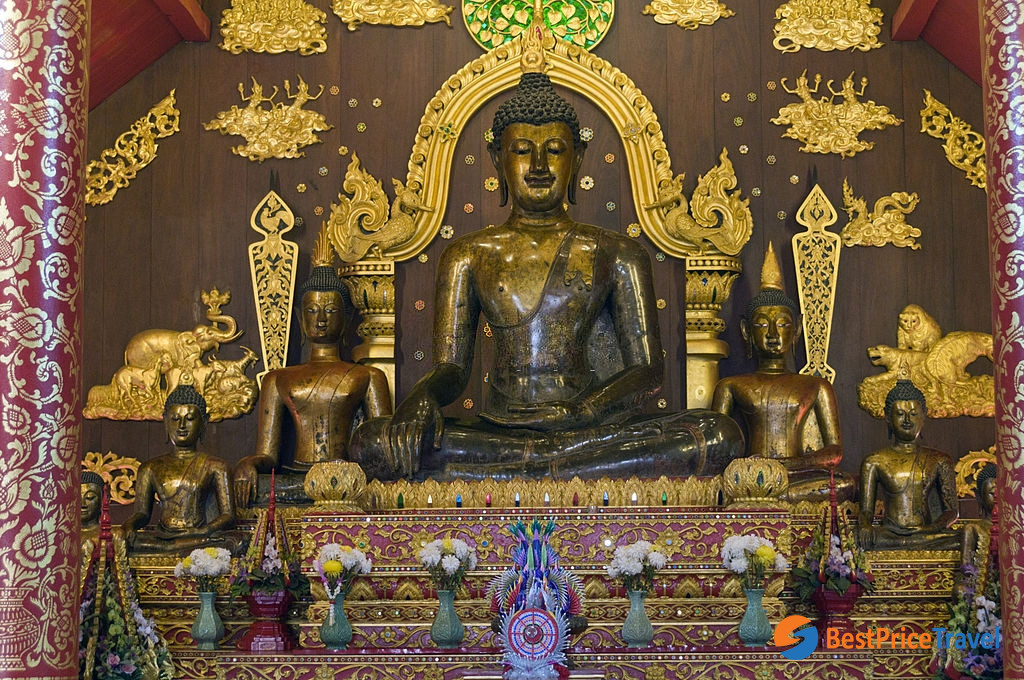 Two large Naga snakes on either side of the stairs guard at the entrance to the building. The viharn contains the image of Phra Chao Lan Thong Buddha - a very large bronze and brass image in the subduing Mara position, cast about 7 centuries ago. Until 1434, behind the viharn, stands the golden spiral shaped chedi where the Emerald Buddha was kept.

The ubosot or ordination hall, which covers beautiful mural paintings dated from the end of the 19th century. If you have a chance to visit this temple, do not forget to explore a modern large two-storey building made from dark wood. There is a wonderful museum.

The building is decorated with golden - coloured panels on the façade as well as very ornate pediments over the doors in the eyebrow shape. The bargeboards on the roof over the entrance are structured in the form of a huge Naga serpent. This museum started to display artefacts from 1296 to 1558 (the Lanna Era).

The temple grounds are peaceful and well kept. The Wat Phra Kaew is undeniably an active temple where monks study and live on the temple grounds. The temple can be found on the intersection of Trairat road and Sang Kaew road in the Western part of Chiang Rai about 800 meters South of the Mae Kok river. It is situated some 300 meters West of the Wat Phra Singh temple.

Wherever, you can get there by samlor known as a three-wheeled rickshaw or tuk-tuk or rent a bicycle and drive there yourself. The temple opens daily between 7 am and 6 pm. On the other hand, the museum opens from 9 am until 5 pm. Entrance is free but it is highly appreciated if you donate for the upkeep of the temple.

Other attractions in Chiang Rai