Being one of the more popular mosques in the city, Saigon Central Mosque is a must-visit regardless of your religious background. This place not only provides Muslim worshipers with a quiet and serene place to practice their beliefs but also helps tourists in Ho Chi Minh City to understand more about the Muslim culture in Vietnam.

Saigon Central Mosque, also known as Jamia Al Muslim Cathedral, or Dong Du Mosque is one of twelve mosques in Ho Chi Minh City. The mosque is located at 66 Dong Du Street, one of the main roads in District 1, closed to many famous hotels and restaurants such as Caravelle, Bong Sen, Dim Tu Tac…

This mosque really stands out with its green and white color in a peaceful area surrounded by a solid fence. Thanks to the great location and the convenience of the shaded verandah and cool stone floors, this is an ideal place to sit and contemplate during hot day.

It takes 30 mins to get there by taxi if you travel from the airport, and 15 mins if you from the Saigon Railway Station. 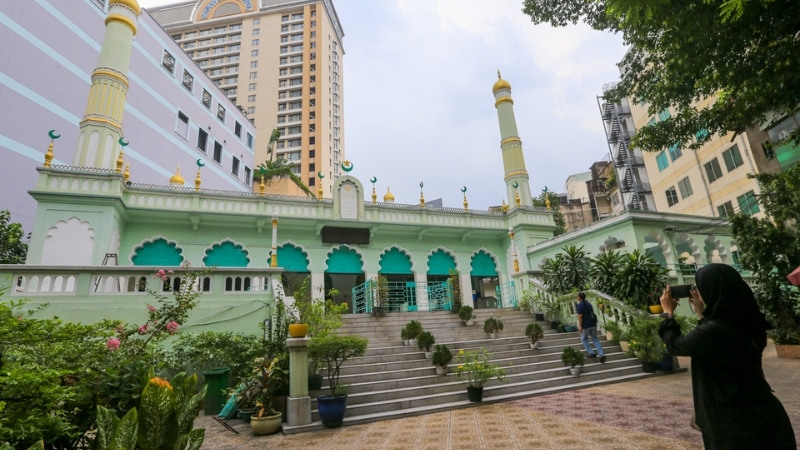 The history of Saigon Central Mosque

Saigon Central Mosque was built in 1935 by the South Indian Muslims for worshipers only from Southern India who came and lived in Saigon. But today, Muslims around the world can visit here to practice their beliefs.

The Mosque has become the most important one in Ho Chi Minh City. Every Friday at noon, going to the Mosque is compulsory for Muslims. The Mosque becomes crowded, busy, but not chaotic. Not only local Muslims but also many international believers living and working in Vietnam such as Indians, Pakistanis, Indonesians, Malaysians, and Arabs... come here to worship. 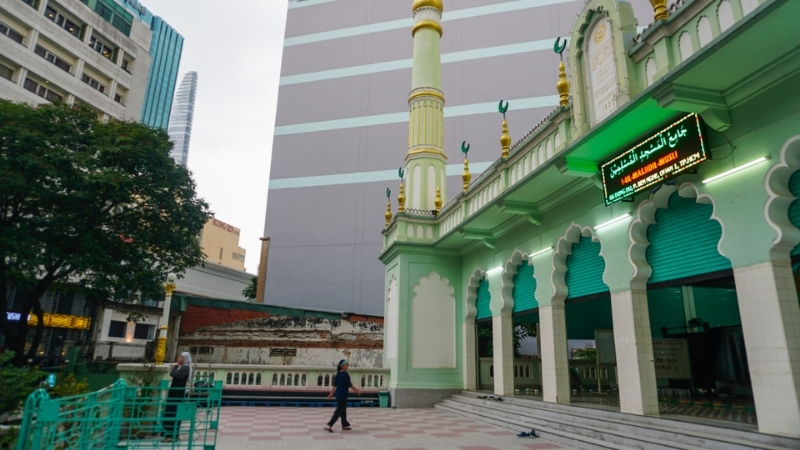 It is a clean and well-maintained mosque with its four minarets, and colorful exterior. The facade is stunning white while the interior is light blue. Its overall architectural structure is modeled after the architectural style of the Roman church in Europe. The shape of the door features a Roman-style arch structure. Indian Buddhist architectural style is also added to the building the arc of the head jamb has a lotus shape.

The sanctuary is divided into several areas. The main hall is for male worshipers only. Female followers are required to wear a scarf and perform rituals, and worship in the adjacent corridor.

There is also a pool for male followers to experience the ritual ablution before prayers. They are required to perform five prayers a day. And before the ceremony, it is necessary to clean their hands, feet, mouth, and ears).

Close to Ngan Gate, the 4 cannons represent the 4 seasons (spring, summer, autumn, and winter), while the 5 cannons near Quang Duc Gate symbolize the 5 elements (wood, metal, water, fire, and earth).

The corridor is so large that may accommodate a number of believers and worshipers. Further, there is also a 1-piece floor with breathtaking floral tiles, covered by rugs where people can sit to meditate or kneel to pray.

Right outside the mosque, you can easily find many street vendors selling halal foods from curries to biscuits and pieces of bread. You should try Halal food here as it is one of the distinctive meals of Muslims. There are also several Vietnamese restaurants opposite the mosque where you can taste some nice halal dishes for lunch or dinner. 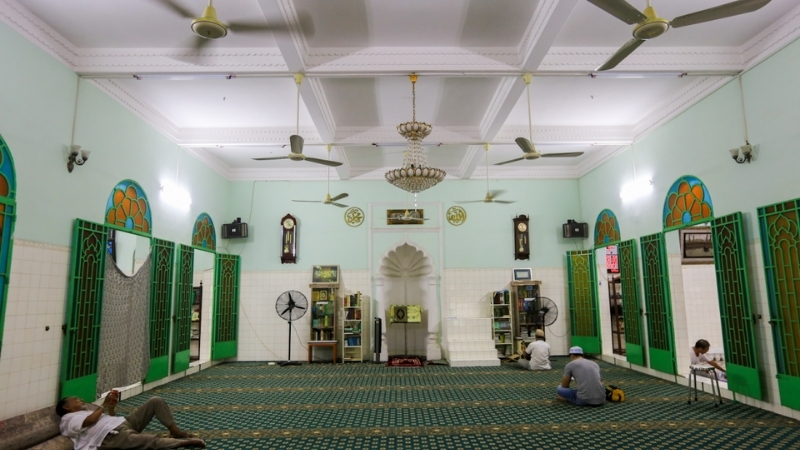 Tips for the best visiting experience at Saigon Central Mosque