An overview of Saigon River

Saigon River is a famous tourist attraction in the south of Vietnam. It is considered as the historic witness of the city that went with the city through wars, witnessed the growth of the city from the past to the present, has brought benefits for the city and the citizens, beautifies the city to help to develop tourism.

It plays an important role in the development of Ho Chi Minh City in particular and Southern Vietnam in common. The river is 256 kilometers from the upstream to the Can Gio Gate and the section flowing through Ho Chi Minh city is 80 kilometers long.

The river used to be an important route to connect two ends of the city when the transport was not as convenient as now. With its 20 meters at the deepest, and from 225 meters to 370 meters width, the river is suitable for small ships, boats, and yachts to operate. It used to be the main route for transferring exploited natural resources from Southern Vietnam to French big ships in the East Sea by barges, or small ships.

The history of the Saigon River

Saigon river plays an important part in the development of Ho Chi Minh City, it is always a partner of the city,

In the seventeenth century, the only way to reach Saigon which was called Gia Dinh at that time is to sail on the Saigon River. Then Vietnamese government – Nguyen Dynasty decided to open and develop commerce in Gia Dinh. Gia Dinh became one of the main trade ports in Vietnam. The river becomes an important route to get to Saigon from other provinces.

The time from the eighteenth century to the first half of the twentieth century was the peak period of the Saigon river. Saigon port welcomed hundreds of ships from China, Malaysia, the Netherlands, and Portugal which stopped loading on Vietnamese agriculture goods and silks. Fench built Nha Rong Port and made it become an essential stop in the trading routes from Europe to Asia.

Things to do at Saigon River

One of the most interesting things to do on the Saigon river is to join a boat tour. It will be a memorable trip for anyone in the city. On the boat, you can see the whole city, travel from the suburb to the urban. The scenery on both banks changes from large fields to small old houses in fishing villages along the river to floating markets on the river and to the center of the city with skyscrapers, parks, riverside restaurants, entertainment centers. The most popular tours on the Saigon river are ferry boats from Ho Chi Minh to Vung Tau, Cu Chi tunnel, and Can Gio Mangrove Forest. These tours will combine with the visit to a pagoda, handicraft centers, fish farm, ancient house…

Saigon is the city of nightlife, that never sleeps. When you are in Saigon, looking for a place with good food in a romantic atmosphere, a dinner cruise on Saigon should be on the list of must-do things. Saigon has many cruises serving food at night. While enjoying the delicious dishes from Vietnam and other countries, you can also see the view of the city at night. On the cruise, you can also enjoy traditional music dance. Saigon is different from it in the day. The city is lit up by a lot of sparkling colorful lights of signs, restaurants, bars, shopping malls, and high buildings. Under the black night sky, high buildings, skyscrapers shimmer sparklingly as huge candles.

Located on the bank of the Saigon River, Nha Rong port is another tourist attraction in Ho Chi Minh City. The port was the place where President Ho Chi Minh left for finding a new way to release the country in the ship named The Admiral Latouche-Tréville. Inside the port is a museum, which welcomes a lot of tourists who are interested in learning more about the life of the president through images, books, artifacts. The port by the river becomes a sacred symbol to the Vietnamese. 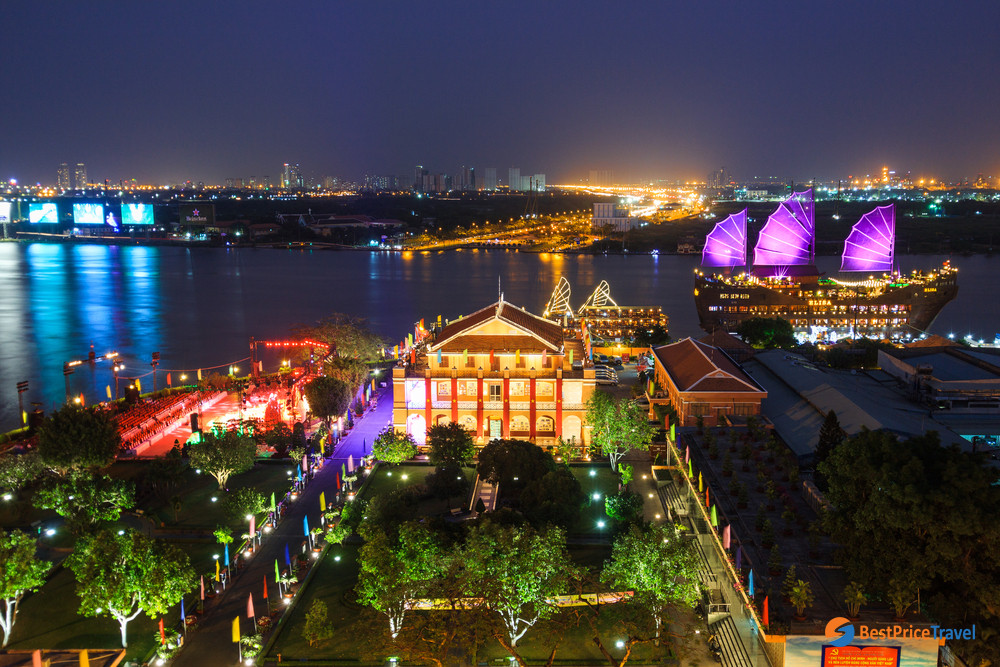 Taking a water bus is not only a kind of transportation within Saigon but also an interesting way to see Saigon. On the bus, you will be able to enjoy the beautiful scenery along the way. The ticket is at a reasonable price, so it is the favorite choice among tourists. The water bus has 5 stops which are Bach Dang (District 1), Thanh Da (Binh Thanh District), Binh An (District 2), Linh Dong (Thu Duc District), and Hiep Binh Chanh (Thu Duc District) 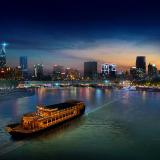