Shwedagon Pagoda is considered as an important tourist destination in Myanmar and Yangon also. Coming here, tourists will be overwhelmed by its history and marvelous architecture.

Shwedagon Pagoda, also known as Golden Temple, is a prominent architectural masterpiece of Yangoon city. Considered as the most sacred temple and symbol of Myanmar, this temple is also a place to store precious treasures of Buddhism. The temple, believed to be more than two thousand years old, is not only a pilgrimage site for Buddhists from all over the world but also the most popular destination for tourism in Myanmar. 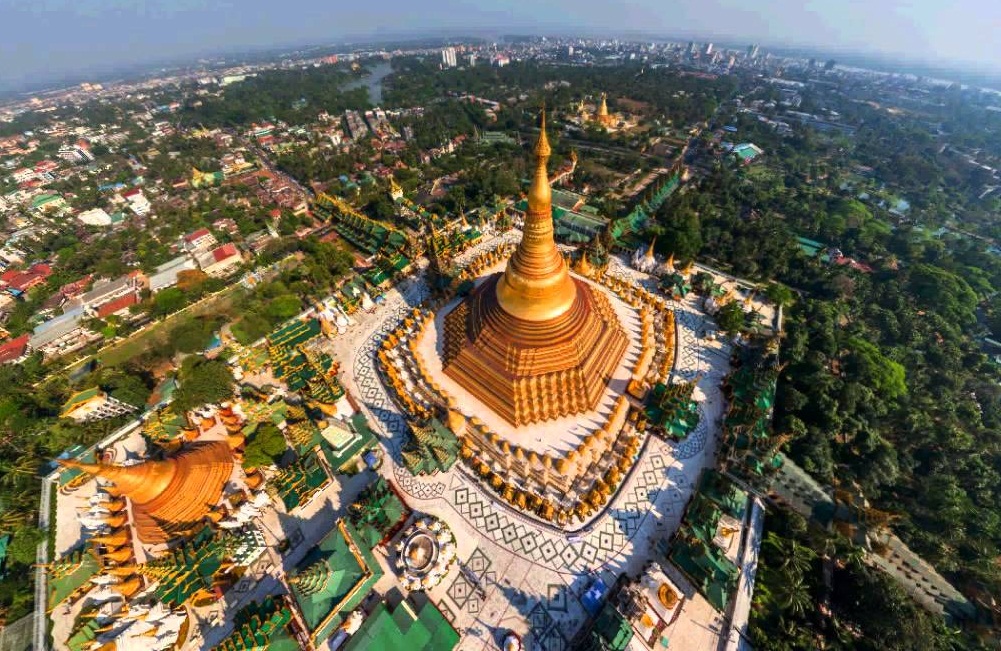 Bird-eye view of the Shwedagon Pagoda

According to Myanmar traditional legend, Trapusa and Bahalika Buddhism, two merchant brothers came to trade in Balkh (now in Afghanistan). On their way back, they happened to meet Shakyamuni Buddha. They offered food and were recruited by the Buddha to be the first two disciples, and given eight hair relics. When they returned, they came to Myanmar and were supported by King Okkalapa to find Singuttara Hill, near the capital of Pokkharavati to build a stupa to worship the eight hairs. This place then became Shwedagon Pagoda. According to legend and according to the monks' records, the temple was preceded by the death of the Buddha, meaning it was founded for nearly 2,500 years ago. However, archaeologists believe that it was first built in the period from the 6th century to the 10th century. 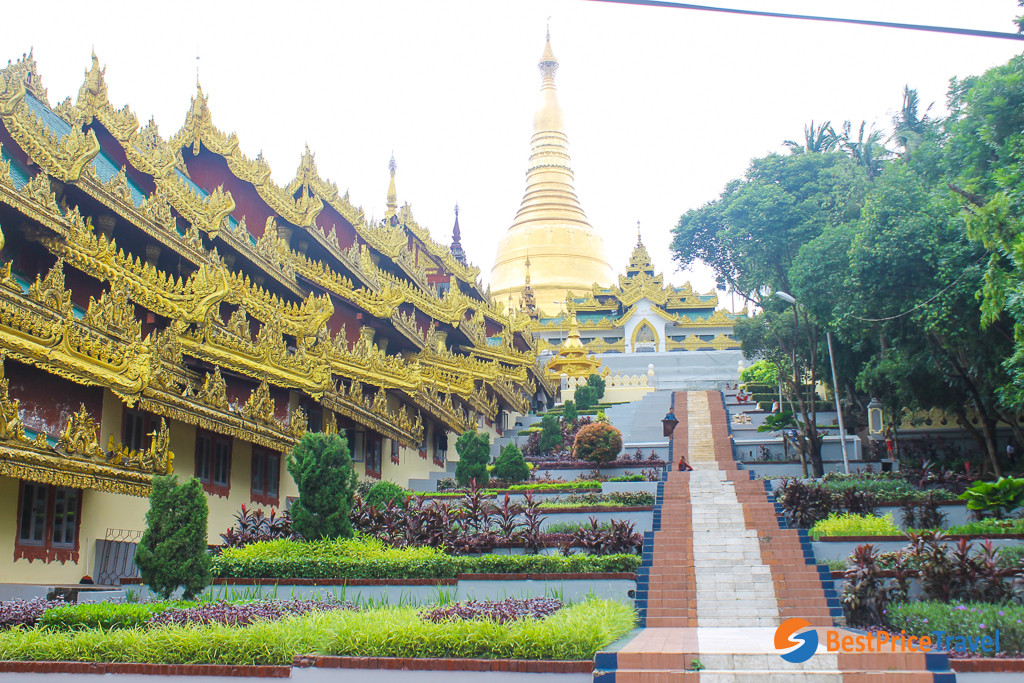 The first impression of this pagoda is the golden theme and its majestic dimensions. With the height of 99 meters, the golden temple can be seen from all the places in Yagoon. The temple is constantly rebuilt and renovated overtime in five-year periods. Currently, there is one main tower located on a square platform at the center and four smaller towers located in 4 directions along with a system of 60 small towers located throughout the Shwedagon temple grounds. At the main tower there is a bell that is covered in gold and added a new layer annually. The main gold-plated dome is topped by a stupa containing over 7,000 diamonds, rubies, topaz and sapphires. The highest floor of the tower is decorated with 1100 diamonds, 4300 diamonds on the top a giant 76 carat diamond on the highest peak. There are four routes leading to the main tower. Each of them is guarded by a pair of Chinthes. Three out of four routes are places for Buddha statues display and religious souvenir stalls. Visitors can also use the lifts such as the one located at the southern entrance. 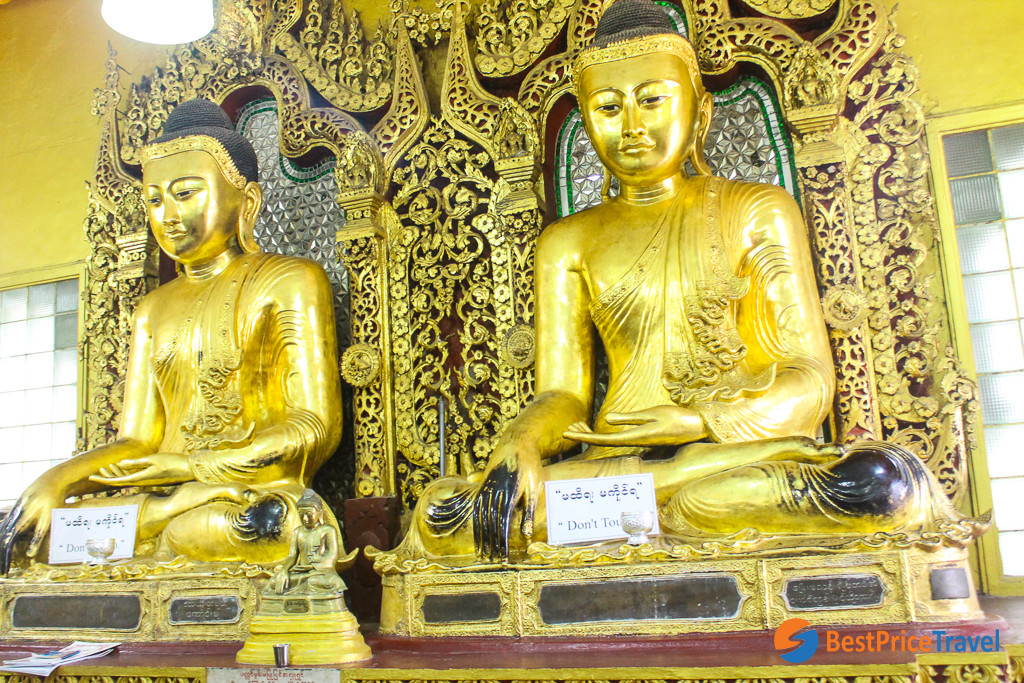 The golden Buddha at Shwedagon Pagoda

Coming to Shwedagon Pagoda, visitors around the world can enjoy the beautiful golden themed landscapes of the pagoda as well as learn more about Buddhist culture in Myanmar. Note that footwear is not allowed anywhere beyond the base of the hill, where provisions are made for storage. As this limits the freedom to exit the pagoda via another stairway, tourists are advised to carry shoes in backpacks. Guides will approach foreign visitors—their tours generally offer decent value for money, especially if you are visiting the pagoda with a group. For those prefer to go alone, the map given at the entrance is very detailed and informative. 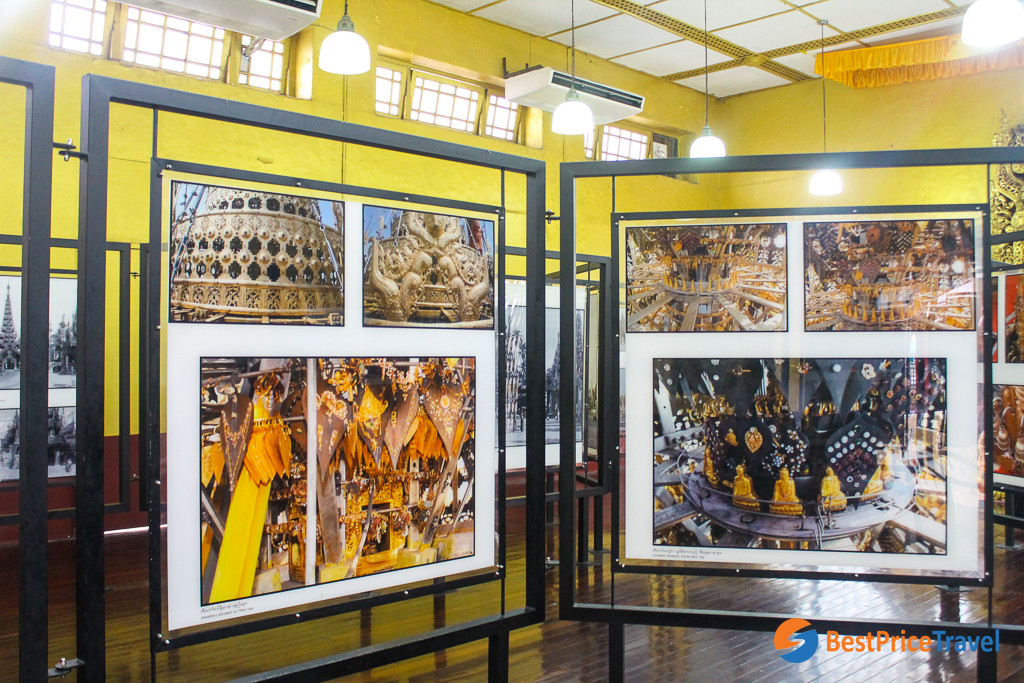 Photo gallery in the Shwedagon Pagoda

The best way to experience the Shwedagon is to simply appreciate the spirituality of the place, especially in the early morning hours or late in the evening, when the temperature is lowered, fewer tourists visit and there is beautiful dawn or stunning sunset. 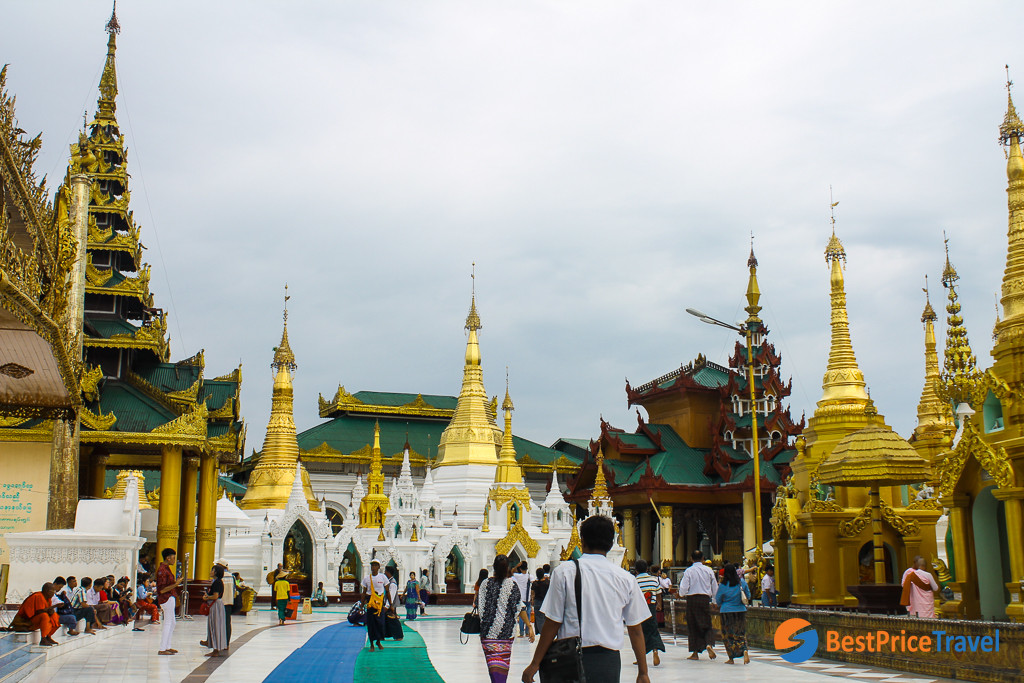 Wandering around the Shwedagon Pagoda

It is ideal to visit this place or Myanmar in general from November to February when the weather is mild and manageable. Tourists should spend at least half a day to a day to explore all the non-restricted towers of Shwedagon Pagoda. Also, remember to wear decent clothes and bring a sack for your shoes as footwear is not allowed in the temple except the base. 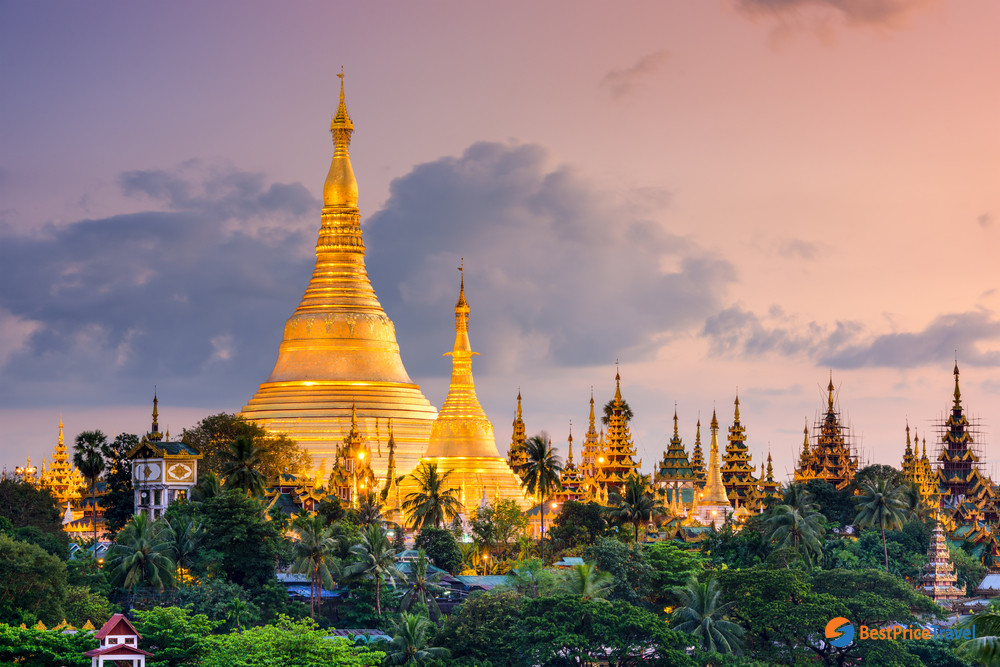 The Shwedagon Pagoda at dusk

This ancient Shwedangon pagoda is located in the west of Royal Lake, tourists can take the taxis from Yangon airport for about 30 minutes or walk here from downtown Yangoon. The entrance fee of the pagoda is 10,000 kyats (approx. US $8) recently. 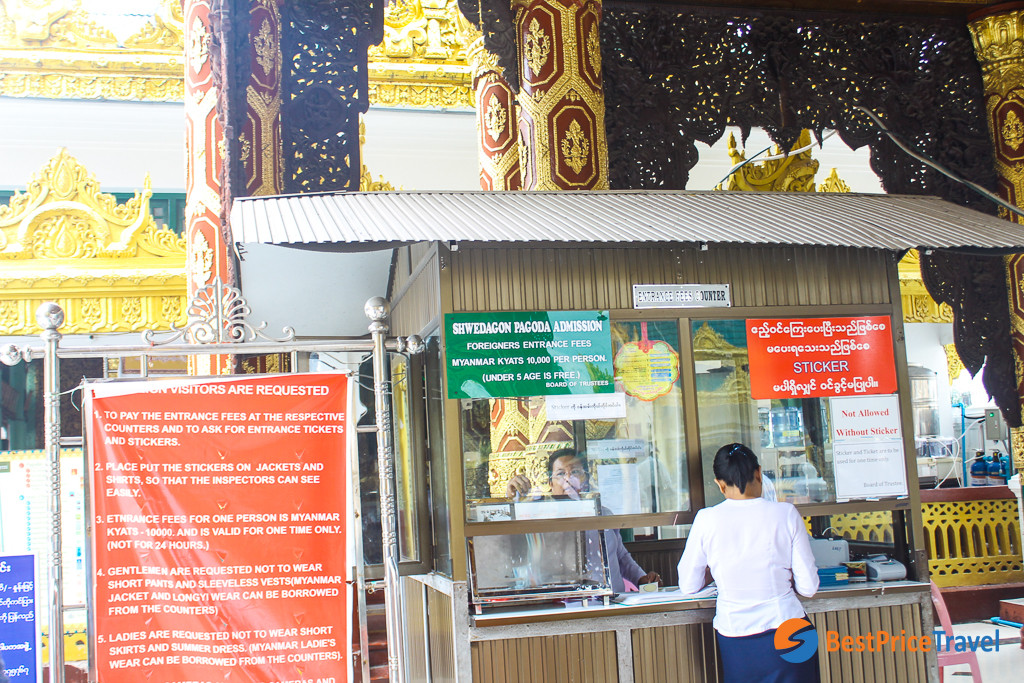 Travelers will see temples mostly everywhere they go in Myanmar, and will be amazed by the wealth and profusion of building styles. However, Shwedagon Pagoda remains unrivaled as a temple, a meeting place and a golden symbol of Myanmar national identity.

The 5 Best Things to Do in Yangon

Other attractions in Yangon