Built in about 12th to 13th century by the King Jayavarman VII, the temple is dedicated to the mother of the king and a replica to Bayon style of art.

About 3km northeast of the main Angkor Wat complex, Ta Prohm is located in the southwest of the East Mebon and east of Angkor Thom. Ta Prohm was founded in the late 12th and early 13th centuries as a Mahayana Buddhist monastery and university. Unlike the other monuments of Angkor, Ta Prohm was abandoned and swallowed by the dense jungle, still retains much of mysteries which made an exotic background in the famous movie “Tomb Raider”.

Once reconquered the Khmer empire from Cham invaders in the years 1177-1181, Jayavarman VII come into power and set out to restore the glory of Siem Reap on the war’s ruins. Ta Prohm was the centerpiece of his ambitious master plan, located roughly in the center of the capital and also connecting the surrounding system of hospital constructed by the King.

Ta Prohm was originally named Rajavihara, meaning “monastery of the King”. The temple was built as a Mahayana Buddhist monastery and university in its time, boasting of control over 3000 villages, thousands of support staff and vast stores of jewels and gold. 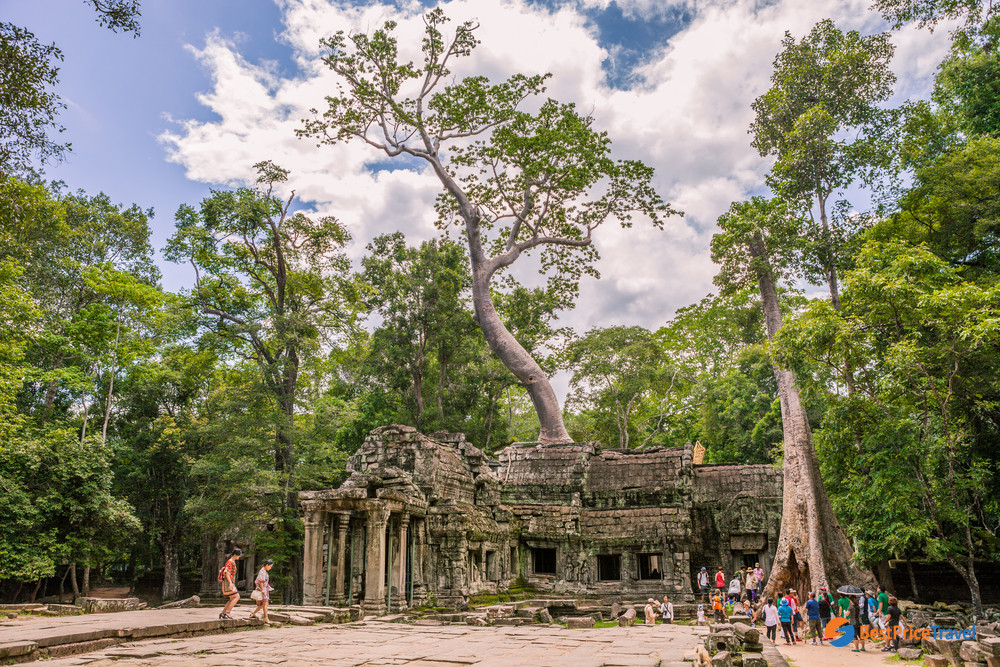 And a sprawling, beautiful state of ruin

The temple has been deliberately “neglected”, to preserve the photogenic scenery and original atmosphere that gives visitors the experience of exploring an ancient site. Except for the maintenance, the clearance of undergrowth for access, Ta Prohm is only repaired in parts needed to prevent the complex from collapsing further. Now a ruin, the monastery's beauty is intensified with massive fig and silk-cotton trees grow from the towers and corridors; offering some of the best ‘tree-in-temple’ photo opportunities at Angkor. 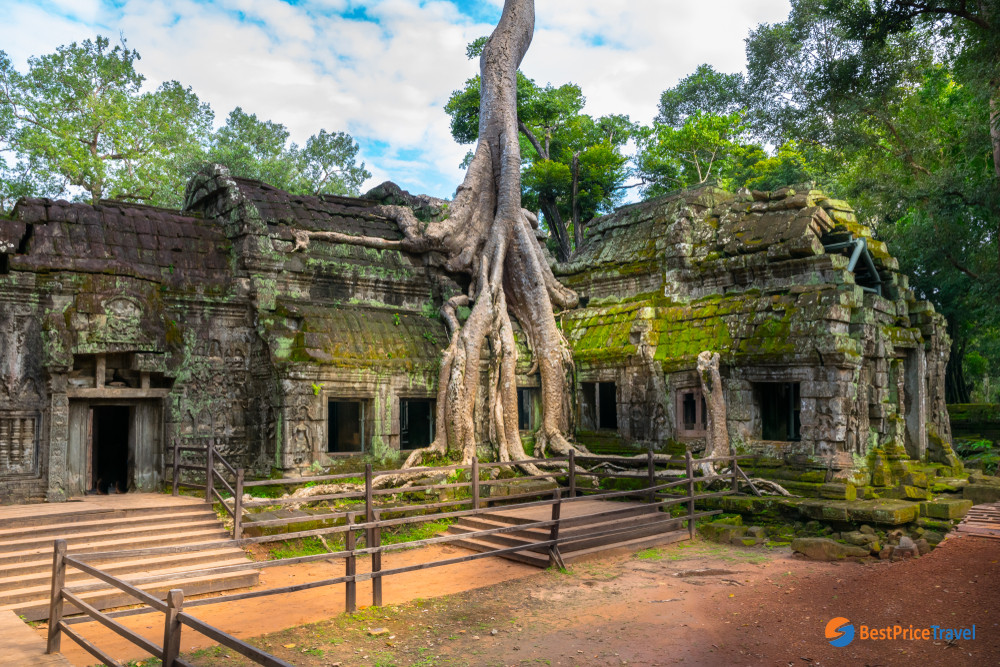 Ta Prohm has a traditional Khmer structure consisting of a series of one-story buildings with gradually smaller enclosures wrap around central sanctuary.

The 5th enclosure, which is the most outer one, is more than 1 kilometer long and 600 meters wide. Similar to the Bayon, the Ta Prohm’s entrance gates are decorated with large faces of Lokeshvara, a Bodhisattva representing the compassion of the Buddha, in all four directions. There was a rest house for pilgrims visiting the temple in front of the terrace. According to inscriptions of the temple’s stele, thousands of men and women who were attached to the Ta Prohm temple as priests, dancers or servants lived within the fifth enclosure.

The 4th enclosure contains depictions of Buddhist scenes at the East gate, the main entrance. Inside the moat of the enclosure are 93 small cells for the Buddhist monks of the temple. This enclosure has a structure called the Hall of Dancers where many dancing Apsara figures were engraved to decorate the structure.

The 3rd enclosure contains numerous carved panels showing depictions of Buddhist scenes, including Buddha’s great departure. At the East end of the 3rd enclosure, there are cruciform galleries delimiting four small courtyards. At the center of the North and South enclosure wall are satellite temples.

The central sanctuary is enclosed by galleries with a tower at each corner. There are a single sanctuary tower set at the center and a library building in the southeast corner of the square central courtyard. The most attractive sight, the famous Tomb Raider tree, is located in the central sanctuary. Apart from the Hollywood status, Ta Prohm is an appealing temple to explore other impressive jungle spots and ruin take-overs in place. All of them caught the movie attraction scouts and made it one of the most atmospheric and most photographed of the whole temples. 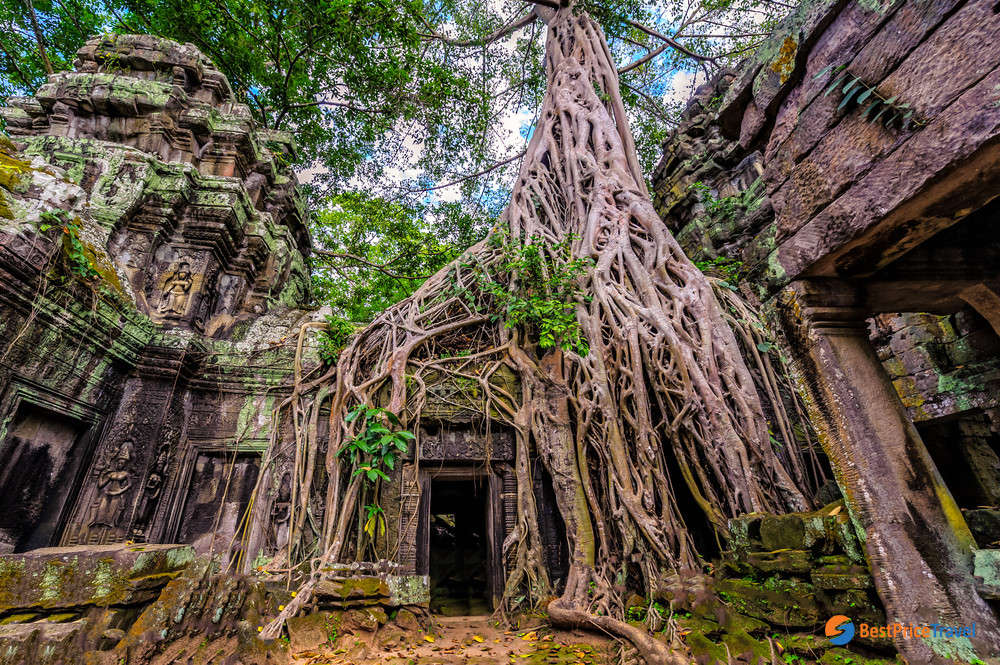 How to get to Ta Prohm

As part of the small circuit of the Angkor complex, Ta Prohm is just a few minutes on a tuk-tuk away from Angkor Wat. The main buildings are encircled by a large embankment so it’s essential to discover the temple by a short walk on a jungle-lined path. Alternatively, another fantastic way is cycling through the trails in the Angkor forest.

Ta Prohm temple is best visited in the early morning while everyone is beholding the mesmerizing sunrise at Angkor Wat. It is worth being an early bird to immerse in the lively jungle sound and the best light for keen photographers trying to catch the ongoing battle between nature and architecture. 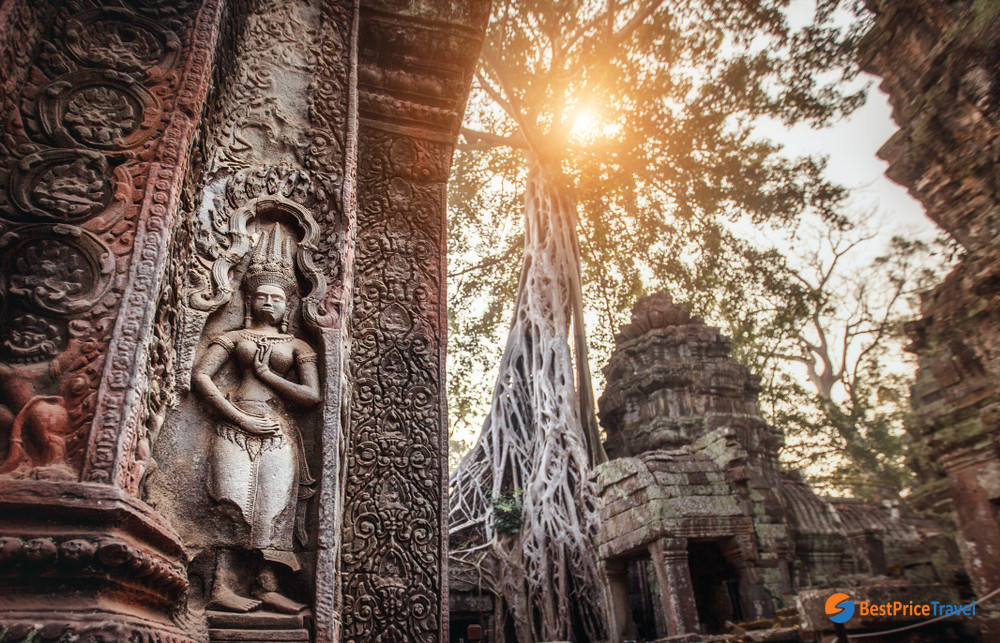 Amazing trees and carvings in sunshine

Ta Prohm is included in the temple pass for the Angkor Archaeological Park. Therefore, most visitors combine a tour of Ta Prohm with a visit to Angkor Thom and Angkor Wat to fill their one-day pass at the temple complex. You can book the admission ticket directly via the main office of Angkor Conservation Area ticket booth. In addition, there are plenty of travel consultants that provide booking services as well as the whole Angkorian tour.

Visiting hours in Angkor National Park range from 7:30 am to 5:30 am but the Ta Prohm is opened from 5:00 am to 5:30 pm, to make it possible for sunrise and sunset views.