Wat Phu, also called Wat Phou or Vat Phu, belongs to a Khmer temple complex at Phou Khao mount overlooking the plains towards Mekong River. The temple has a unique structure, in which the elements lead to a shrine where a linga was bathed in water from a mountain spring.

Located in Champasak, a bizarre town featuring appealing French architecture, Wat Phu is one of the most symbolic sacred mountain temples in Southern Laos. Wat Phu or Vat Phou, meaning 'mountain temple', is a ruined Khmer Hindu temple complex which was built under the Khmer Empire and is considered one of the oldest archaeological sites in Laos.

One temple in the site was constructed around the 5th Century but most buildings found in the complex are dating from the 11th to 13th centuries. Wat Phu initially dedicated to Shiva God of the Hindu Trimurti. Then it was transformed into a Buddhist cloister which is still a worshipful place for local Buddhists. 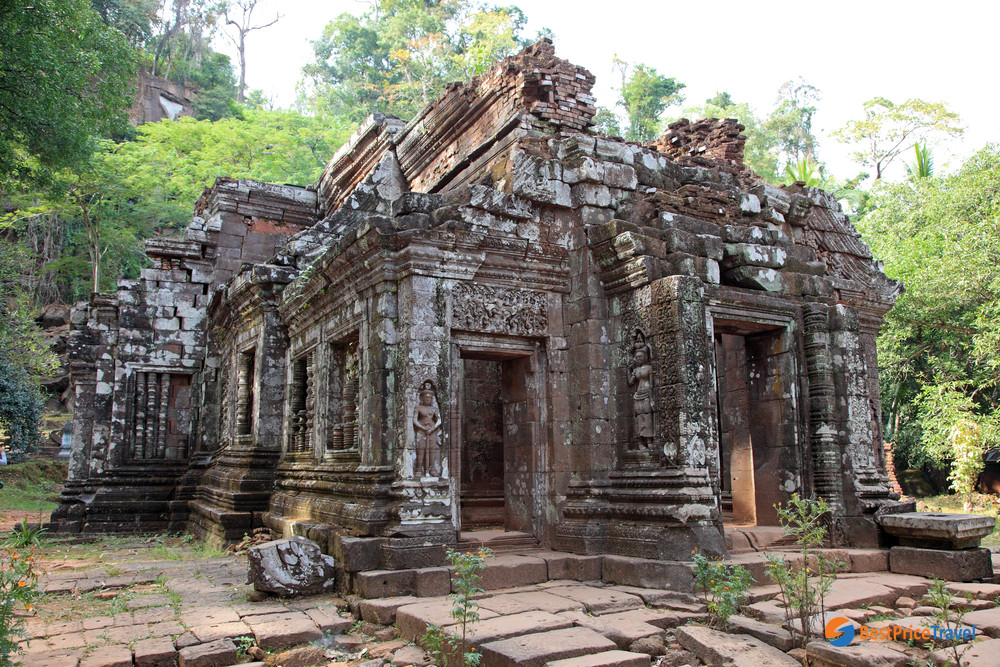 The ruined temple of Wat Phou

Like other notable Khmer architecture in Southeast Asia, it was constructed using sandstone, laterite and bricks. Wat Phu was designated by UNESCO as a World Heritage Site in 2002. The unique structures of the Wat Phu are spread over seven terraces on three levels, representing one of the largest archaeological sites in Laos.

The lowest level contains two great barays bordered by stone lotus sprouts and smaller reservoirs. You can walk along the processional pathway from the barays towards the main sanctuary.

At the middle, exquisitely carved quadrangular pavilions are made of sandstone and laterite with the lintels and pediments delicately presenting various figures of Hindu sculptures. Don’t forget to marvel at four galleries, a central open courtyard and an impressively sacred dvarapala standing like a sentinel with sword. 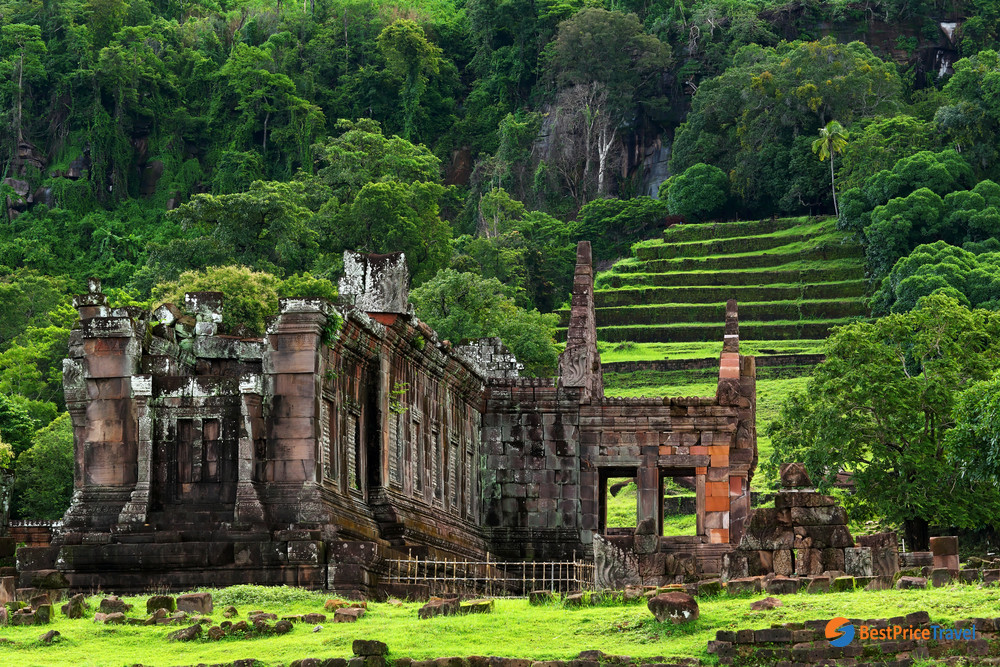 The layout of Wat Phou

On the highest terrace lies the main sanctuary. In altar zone, there is an array of antique Buddha images including a large seated Buddha and three smaller ones, all dressed in saffron robes. Near the main sanctuary, two huge boulders engraved to resemble an elephant and a crocodile stone. Behind the sanctuary, large boulders sculpted in Khmer style display the Hindu Trimurti of three deities comprising Shiva, Brahma and Vishnu. The surviving stones are definitely a masterpiece of sophisticated craftsmanship. At the top of the temple, a freshwater streaming down from the mountain spring is believed to contain holy water. From the top view, you can rewind in a small drink shop to contemplate a panoramically stunning view over the barays, the plains and Mekong River. 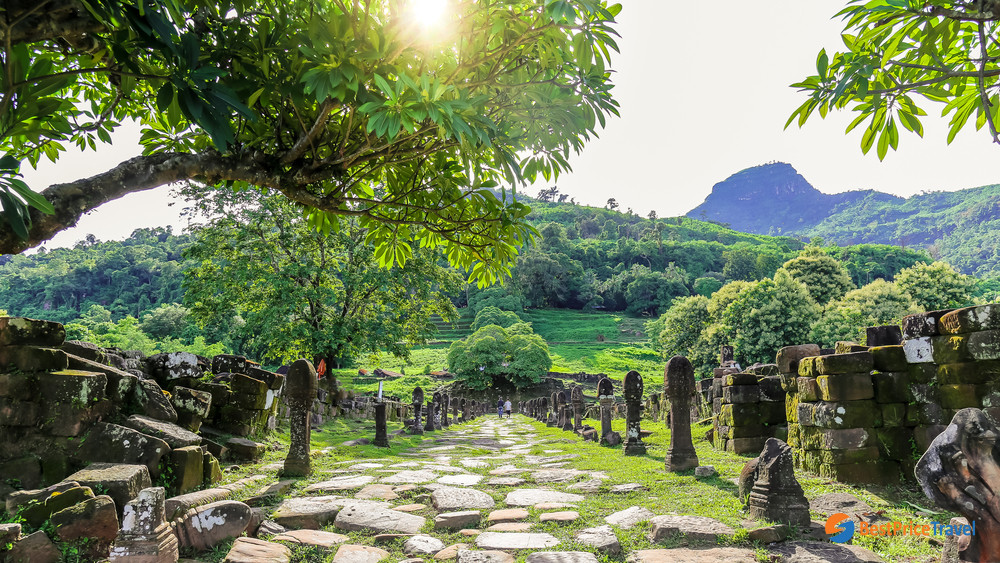 The pathway towards the main sanctuary of Wat Phu

Every year, thousands of people flock to Wat Phou temple to pay respect to the Buddha and attend annual Boun Wat Phou festival celebrated at Makha Bucha day on the full moon of the 3rd lunar month. Series of events take place at this three-day-festival, including offerings, monk-blessing ceremonies, games, traditional dance and music performances.

To get Champasak province, the most pleasant way is to take a three-day Vat Phou Mekong cruise from Pakse town. Likewise, visitors can get there by minivan or public transport. While entering Champasak, renting a tuk-tuk, a motorbike or bicycle is the most common way to make an eight-kilometer trip to the ruined temple. 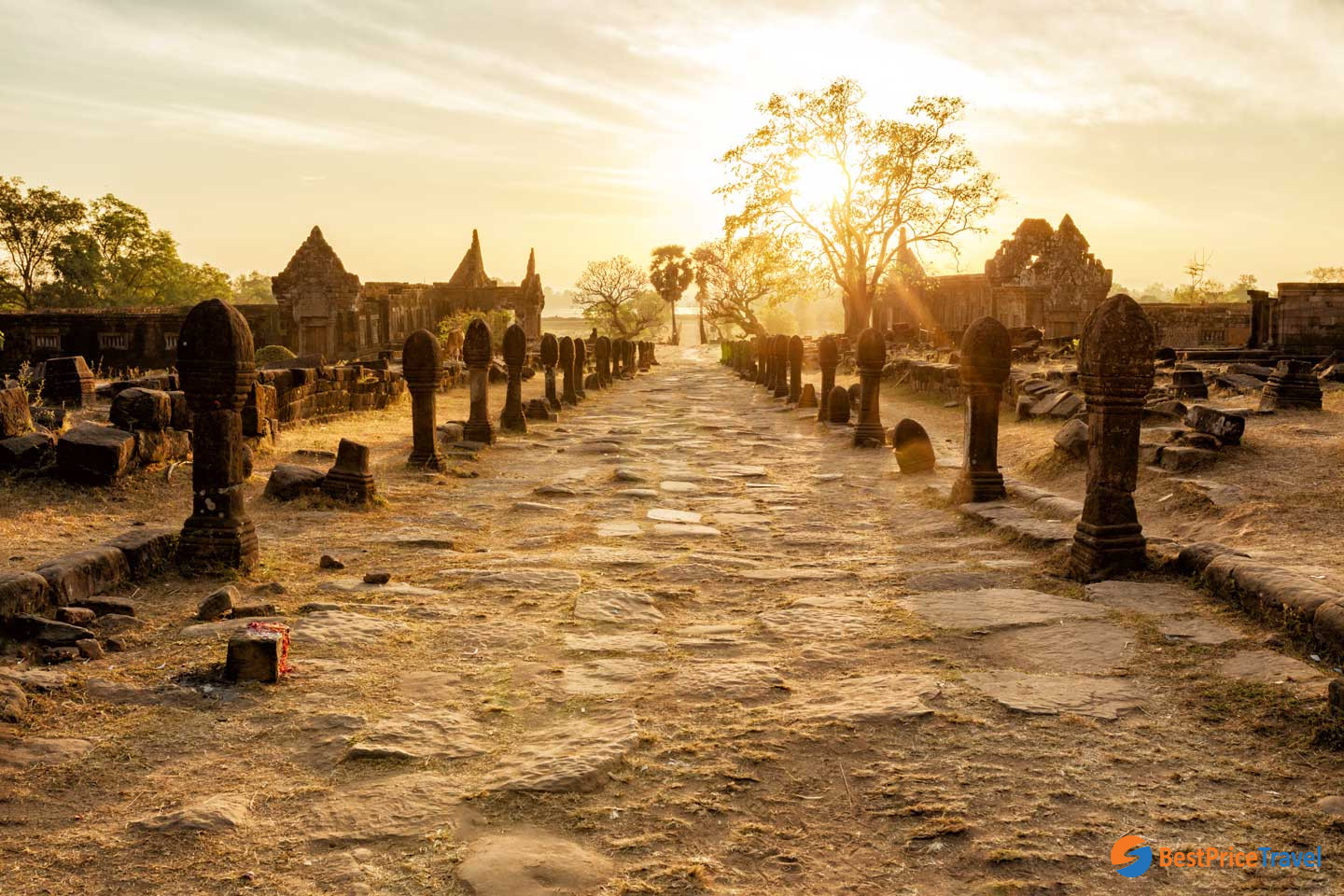 The stunning masterpiece of sunset over Wat Phou

Visitors are allowed to access daily from 8am to 5pm for the site and 8am to 4:30pm for the museum. It’s highly recommended to visit Wat Phu in sunrise or sunset time. The cost of entrance is 30,000 kip per person. Besides, a 45,000 kip ticket will include a ride by golf kart to the entrance gate of the temple. Remember to grab a map at the entrance since there is little signal around the temple complex.