If you are wondering which destination you must go first for a perfect trip to Kampot in Cambodia, just go for Sampov Pram Temple or Wat Sampov Pram. All magical and mystical things here are set to boost your travel experience up to a new level.

Wat Sampov Pram is widely known as a monastery that is situated on the top of the Bokor Mountain, a very iconic mountain range in Cambodia. The temple was previously established by the Majesty King of Cambodia that ruled out the country in the 1920s. Every year, both domestic and international tourists visit here to pray for luck and blessings because they consider Wat Sampov Pram as one of the most sacred spiritual Buddhism places in Cambodia. Another striking feature of the temple that grasps tourists’ attention is Wat Sampov Pram is the highest Buddha pagodas in Cambodia.

The name of Wat Sampov Pram generally means “the Temple of the Five Boats’’. We can understand this point easily with the appearance of a block of five large and flat rock formations located inside the temple, whose shape conveys the images of five sailing boats. The locals often link the origin of Wat Sampov Pram with the myth of Preah Thong and Neang Neak. The story began with prince Preah Thong, who does not have support and faith from his father king. In contrast, the king favors his brother much more than him and force him to leave everything to his brother. As a response to the unfair decision of his father, Preah Thong chose to leave his country and go traveling around the world. One day, when walking on the beach, he saw a couple of girls playing. He instantly fell in love with the beauty of Aquarium princess Negani. Then, they started to love each other. When Preah Thong wanted to meet her father with an aim to get his permission to marry Negani, the Dragon King agreed with his daughter’s choice and let them get married. After that, since Preah Thong wanted to leave the ocean and build his own kingdom, the King wished them luck and gave them five giant boats filled with jewelry and servants. The boats finally landed at the location of Wat Sampov Pram. Preah Thong considered the new location as his destiny and then decided to establish his won kingdom here.

The first thing that will definitely keep you hooked when you join a trip to discover Wat Sampov Pram is the beauty of true Cambodian nature. The natural glamour around the temple is a perfect combination of nature and spirituality. You can take advantage of the incredibly wonderful panoramic sights around the temple to make out-of-this-world pictures yourself. Wat Sampov Pram offers every tourist not only marvelous natural scenery such as crystal-clear sea and lush green jungle but also amazing relics including exquisitely carved statues and golden bas-reliefs. Wat Sampov Pram is still operational by monks, so sometimes you could see them meditating around the temple. It will be a good idea to hire a tour guide to explain the historic significance of the buildings. 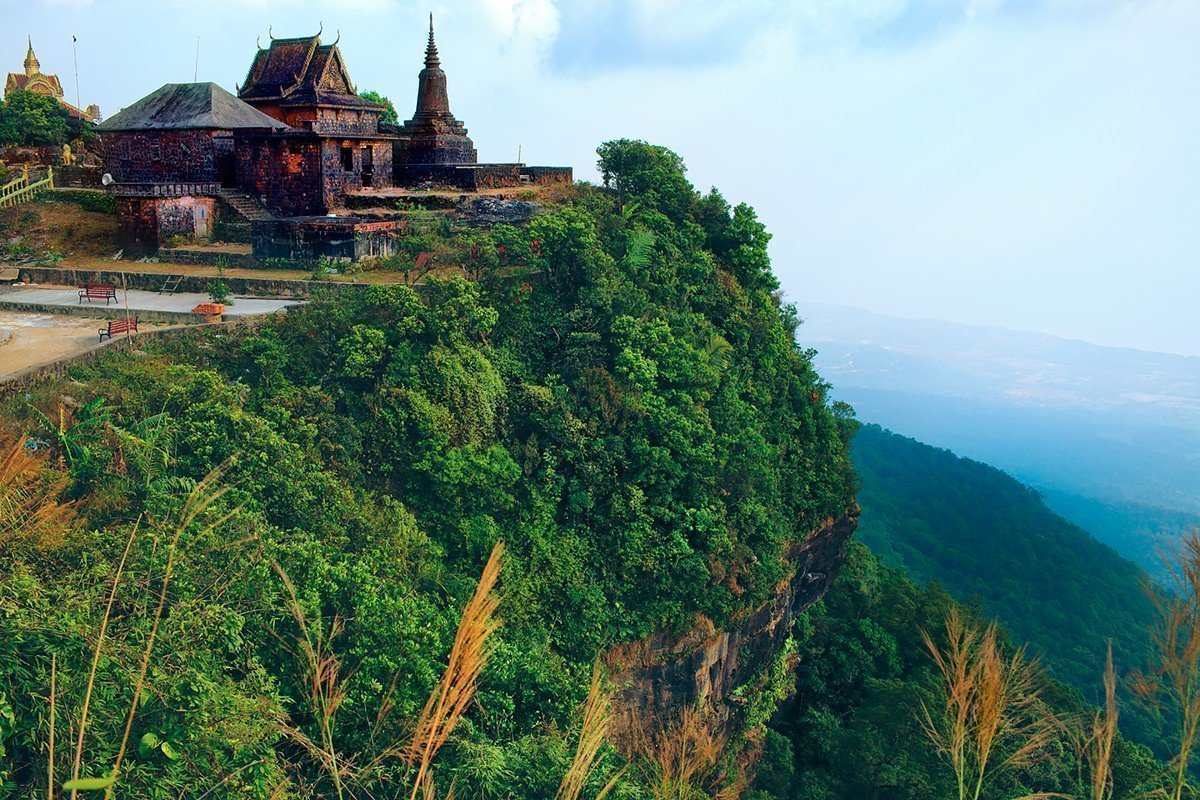 Wat Sampov Pram is nearly 37 km from Kampot town. To get to the temple, you can choose one of the options below. When a taxi trip will cost you about 20 USD and a minivan tour bus will cost 10 USD, a trip on a shared taxi is considered more money-saving as you just spend at least 5 USD per trip. However, many people believe the easiest and cheapest way to travel to Wat Sampov Pram from Kampot is by motorbike. Make sure to prepare a liter or two at the fuel station before you start off your motorbike journey since the road to get to the fuel station on the mountain is very far and prohibitively costly. Also, you need to remember to bring some warm clothes and a raincoat as the temperature on the Bokor Mountain goes down quickly at night and it is often foggy and rainy at the top of the mountain range. If your starting point is Phnom Penh city and you want to get to Kampot, you may consider these suggestive choices:

Traveling by taxi is always one of the most rapid options. If you choose to hop on a taxi to get to Kampot, your journey can be cut short by at least half an hour. A normal taxi with 4 seats may cost you an amount of money ranging from 35 USD to 65 USD. You are recommended to avoid peak seasons as prices tend to escalate. You also need to ask your taxi driver whether they are taking you on a straight path to your final destination or just making deliveries as these deliveries will add more travel time to your trip.

Another option available here to get you to Kampot from Phnom Penh is a bus. There is a host of bus companies transfer between these two spots. However, most buses do not follow a direct route as it often stops in Kep first which unexpectedly extends your trip to 5 hours. To get more reliable information, you should book your tickets with a travel agent. Let take Giant Ibis as a prime example. Getting to Kampot on a 3-hour Giant Ibis bus seems to be the safest option as many passengers recommend. More noticeably, this bus trip can provide you with modern amenities including comfortable reclining seats, power outlets, and Wi-fi connection.

The last option recommended for travelers getting to Kampot is a train. Normally, a train journey will take between 4 and 5 hours with a 6-USD ticket. You can buy tickets at the ticket office at Phnom Penh Station. Remember the opening hours of the station that are regularly from 8 am to 4:30 pm from Monday to Friday and from 6 am to 12 pm on the weekend. It is a good idea to go for the Friday train to have a trip less busy than trips on other days.

All in all, Wat Sampov Pram is a must-visit destination you should not overlook to have an ideal trip to the southside of Cambodia. It is advisable for you to take deep research on spots like Wat Sampov Pram of your itinerary to Kampot to get useful information and better preparation for marvelous things ahead.

Other attractions in Kampot