Chinatowns flourish in many cities around the world. Vietnam also has a significant ethnic Chinese population, known as Hoa people, most of whom live in Cholon – Saigon’s Chinatown.

Saigon’s Chinatown is the Cholon district which has been a stronghold for the Chinese-Vietnamese community since the late 1770s. Similar to other Chinatowns in the world, Cholon is the place where the majority of ethnically Chinese, or are descended from ethically Chinese people, live. 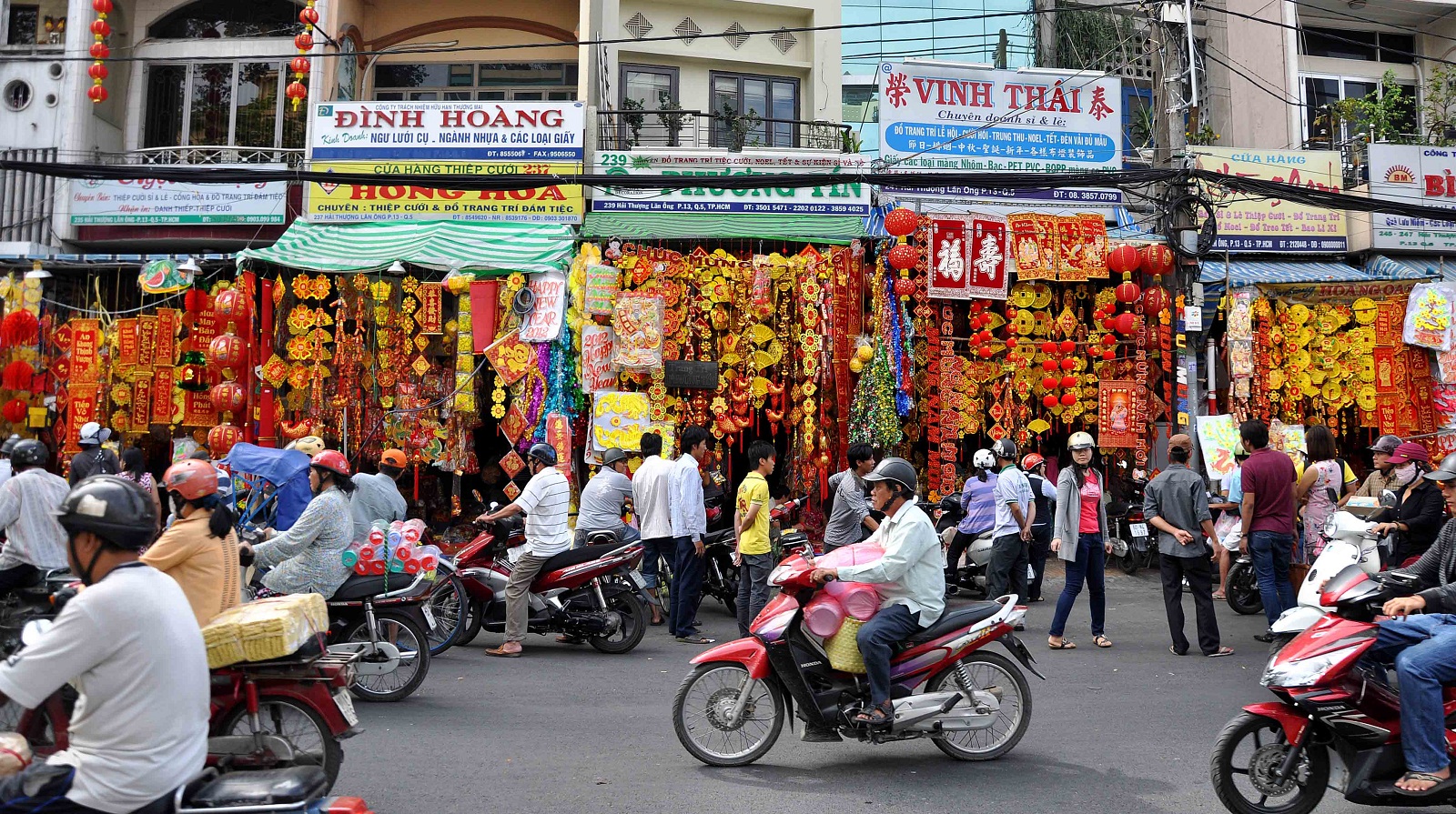 Cholon is a huge area situated in District 5 on the western bank of the Saigon River; bordered by Hung Vuong to the north, Nguyen Van Cu to the east, the Ben Nghe Chanel to the south, and Nguyen Thi Nho to the west. The name Cholon means "Big Market", in Chinese it is called Tai-Ngon which means embankment, but this name is hardly used by anyone else. Its rich Chinese heritage gives it a feel of a city within a city, in fact, Cholon used to be a city itself until it was merged with Saigon.

Cholon helps to bond the entire Chinese community living in Southern Vietnam. It is hard to believe but this place is even more chaotic than downtown Saigon. Cholon is a bustling mix of old and new things, filled with temples, traditional shops and markets as well as cool stores and cafes. The architecture is a fusion of Chinese tradition and French flair. Like a Russian doll, one elaborate roof begets another, smaller, while colonial France has dibs on the color scheme. The streets are narrow and maze-like, as with many densely populated, rapidly built and re-built areas. Quite different to other districts, its congested streets and alleys are a great place to spend a few days wandering around. Its bi-lingual signs, special foods, ancient pagodas and unique blend of culture give Cholon a very distinct feel and charm that local Vietnamese even find quite novel when they visit.

Ethnic Chinese have been moving to Vietnam for centuries. In the late 18th century, Chinese refugees took shelter here from the Tay Son forces, due to the support of the Nguyen Dynasty. It was given city status in 1865. By the 1930s, it had expanded to the city limit of Saigon. Back in the old days, the place where Chinatown now sits was regarded as the city’s center of commerce, in comparison with District 1 – the center of administration nowaday. As urban spread enveloped the twin cities there were amalgamated into one city called Saigon-Cholon. Since 1956 “Cholon” was dropped from the name and Saigon became the accepted title. During the Vietnam War, many American soldiers and some deserters ran a thriving black market here.  While many Chinese left after the war, the area still retains it Chinese heritage.

Walking around Cholon, it is also not difficult to spot traditional Chinese practices like shrines to earth gods outside homes, shops and most obviously of all, Mandarin pop songs blasted from home entertainment systems. While many Buddhist pagodas in Vietnam take their styling cues from Chinese designs, those in Cholon are particularly special. They are the embodiment of Chinese cultural life as traditional religious and cultural events continue to be celebrated and commemorated. 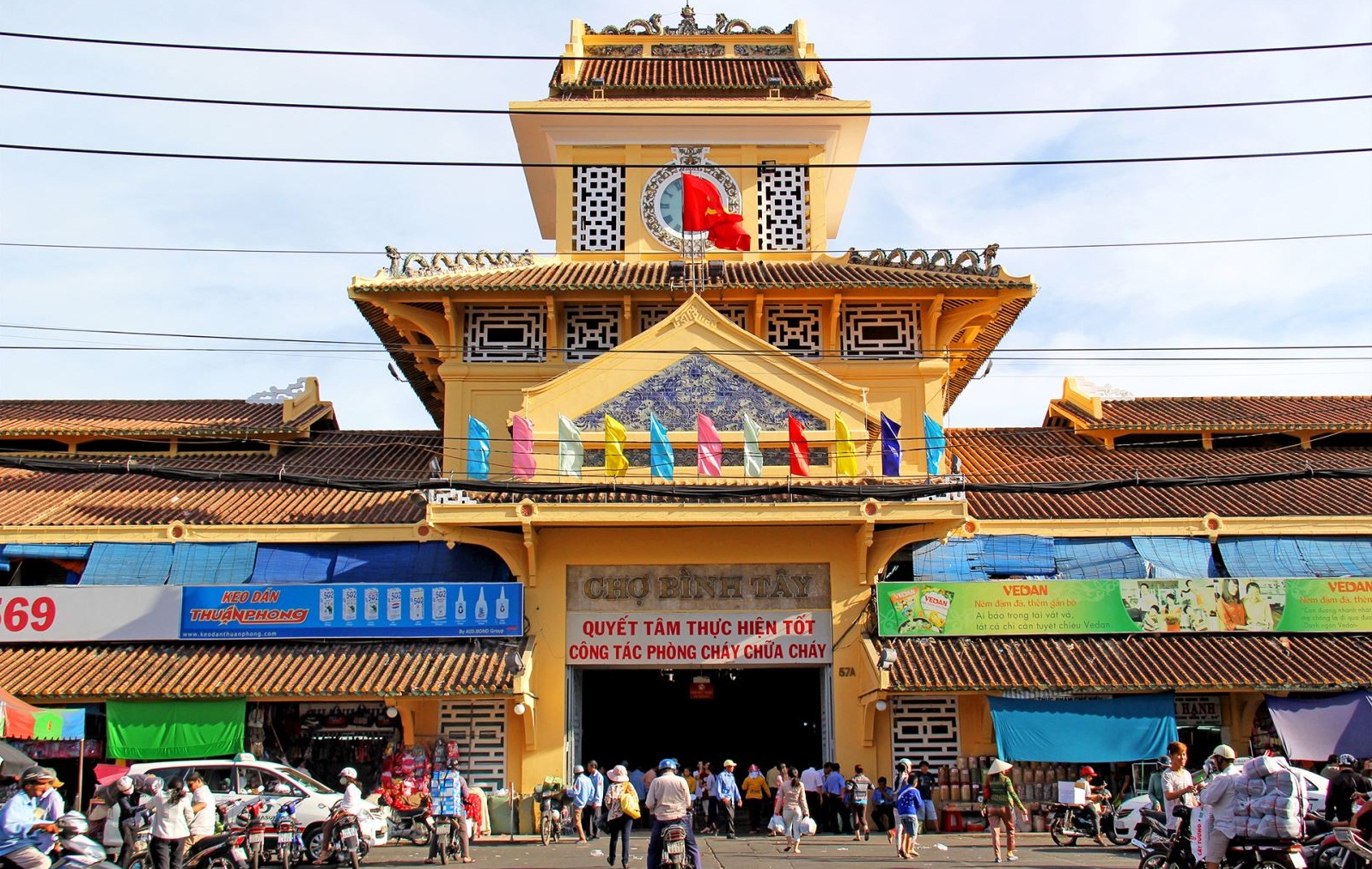 While there are many markets within Cholon, Binh Tay is the central market – the largest and distribution hub for all things food and clothes in the area. Binh Tay Market is also one of the major markets in Saigon. It is quite similar to Saigon’s Ben Thanh Market, but it caters more towards local Vietnamese and Chinese shoppers, and less to tourists, so it has fewer souvenirs and more local Vietnamese products. You will find like everything you can imagine within the market. 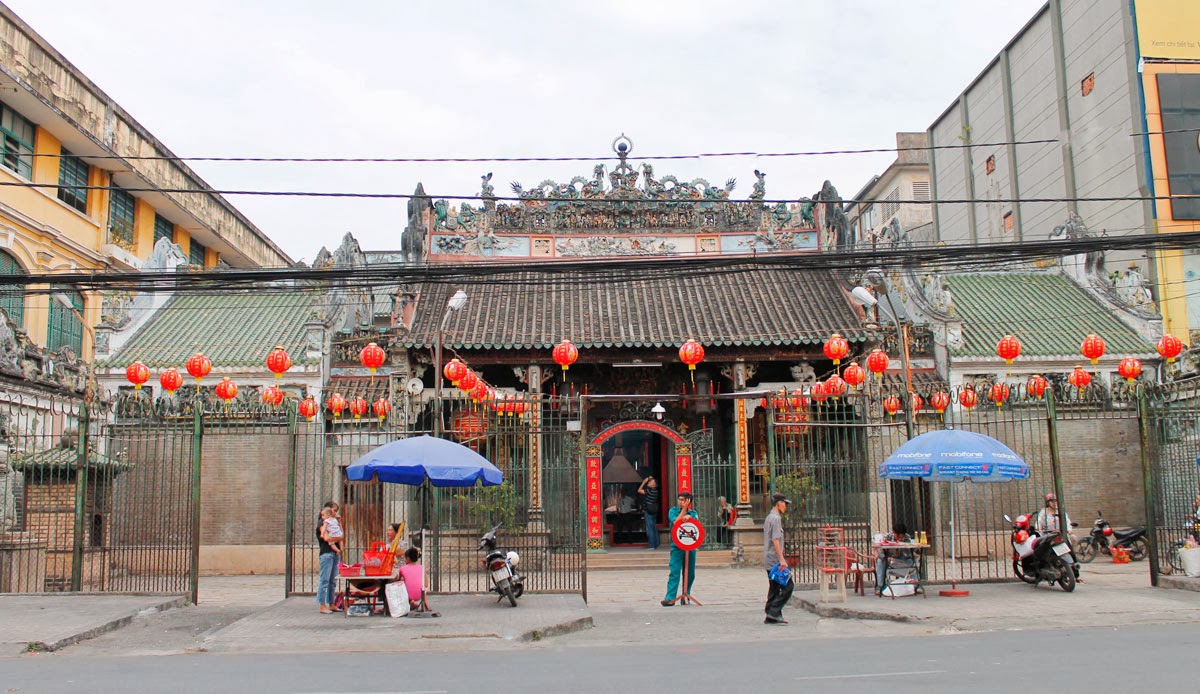 The Lady Thien Hau Pagoda, one of the oldest of Chinese community in Ho Chi Minh City, is located at 710 Nguyen Trai Street, District 5. It was built by a group of Chinese immigrants from Guangzhou in around 1760. It is dedicated to Lady Thien Hau, the Lady of the Sea. You will be impressed by the porcelain figurines that decorate the roof. Look at the details we may find many interesting things like the wedding custom and clothes in China in late 19th century, or famous characters from "Travel to the West", or these demons probably related to the story about the Justice, the Hell, or the battle of the General Guan Yu from the famous epic story "Three Kingdoms", or simply the scene from the routine life to the royal life in China at that time, or the Eight Immortals from Chinese mythology, etc.

Quan Am Pagoda (On Lang Pagoda) 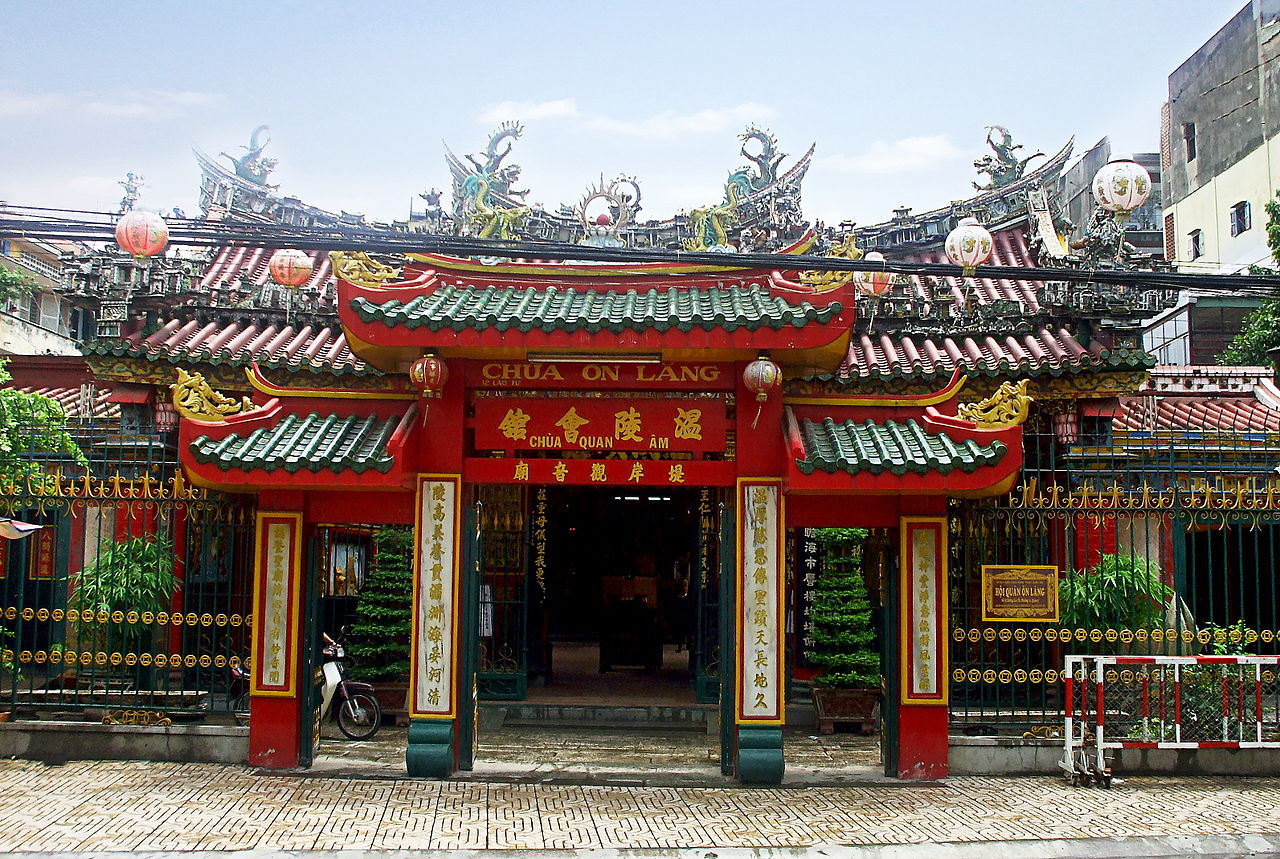 Quan Am Pagoda is located on a tiny street, carefully hides in between small streets and food stalls. Founded in the early 19th century, the pagoda is named after the Goddess of Mercy. It is much smaller than the other temples you may find around town, and it has an almost cozy atmosphere. It is also one of the most colorful temples you could have seen! Fantastic lacquer representations of guardian spirits can be found at the entrance and superb ceramic scenes decorate the roof, depicting figures from traditional Chinese tales. 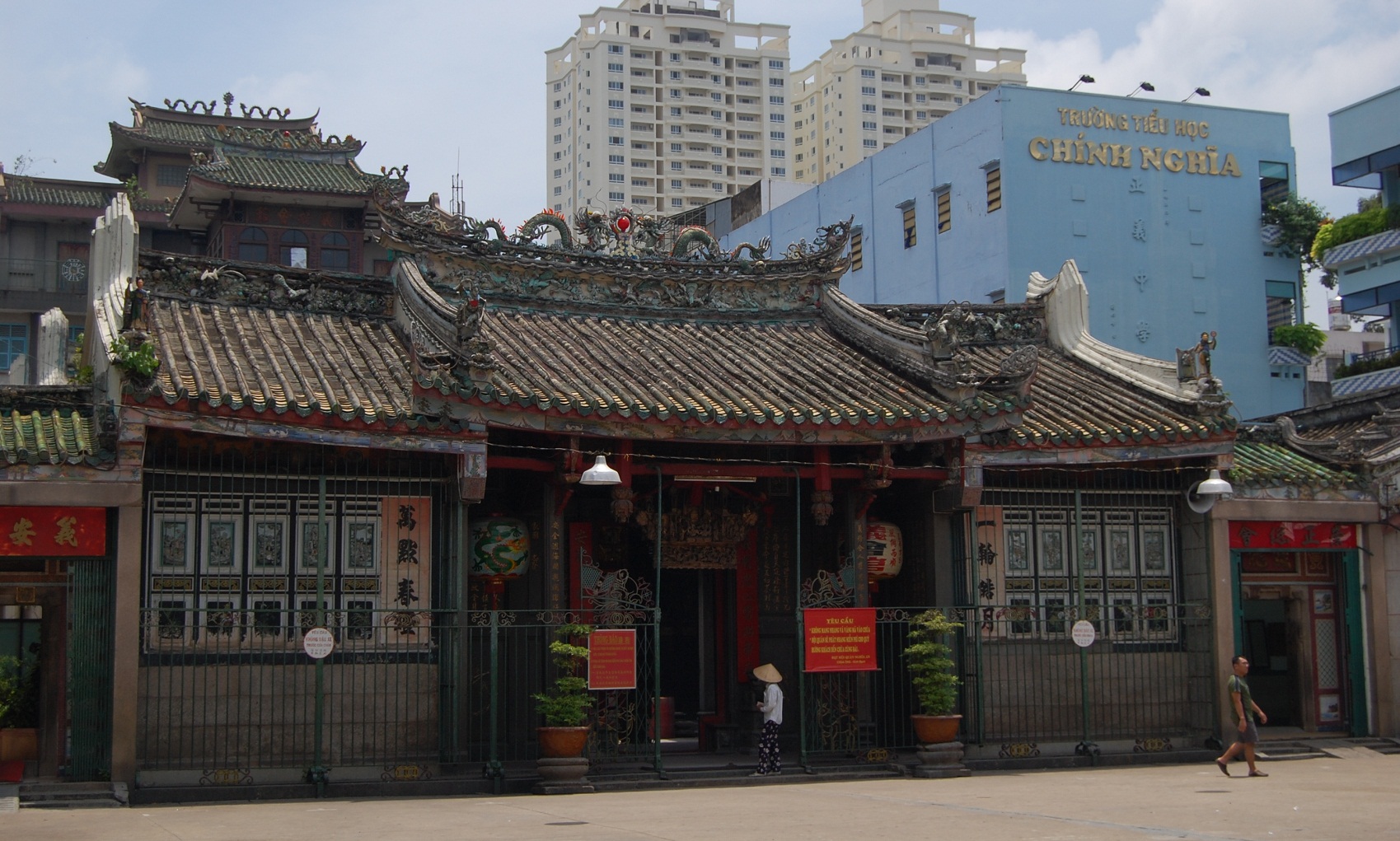 Nghia An Hoi Quan Pagoda is one of the oldest temples in Saigon, located at 678 Nguyen Trai Street. This pagoda was built in the 19th century by the Chaozhou Chinese population. It is dedicated to Guan Yu (also known as Quan Cong), a deified general who lived during the late Eastern Han Dynasty. The pagoda is noteworthy for its gilded woodwork: a carved wooden boat hangs over the entrance and to the left is a large representation of Quan Cong's horse and groom.

Cholon has retained its Chinese identity and is a thriving hub of commerce and retail endeavour. All aspects of traditional Chinese culture have been preserved and it presents a truly amazing glimpse into a different world. Chinese Vietnamese community is an indispensable part of Saigon cultural features. So when you are in Saigon, try to include Cholon in your tour around the city. It might be the start of something special!

Get a taste of all things to do in Saigon 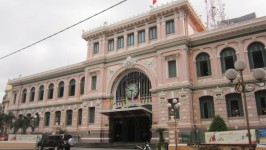 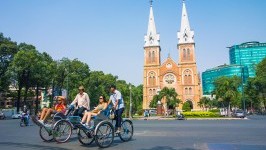 Get a taste of all things to do in Saigon 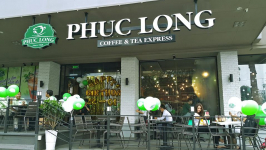 When Is The Best Time to Visit Chiang Mai?