In the last few years, the Golden Bridge (Da Nang, Vietnam) has been creating a fever throughout the world with its appearance on not only many world-known channels and newspapers such as CNN, BBC, The Guardian, Times, etc. but also the most popular social networks and forums like Instagram, Facebook, Twitter, BuzzFeed, Reddit, etc.

Taking high ranking continuously on many architectural charts since its opening day and owning several magical and majestic short online videos also contribute to the fact that Golden Bridge is becoming a must-go place with the tourists who plan to visit Da Nang, Vietnam in the upcoming tourism season. 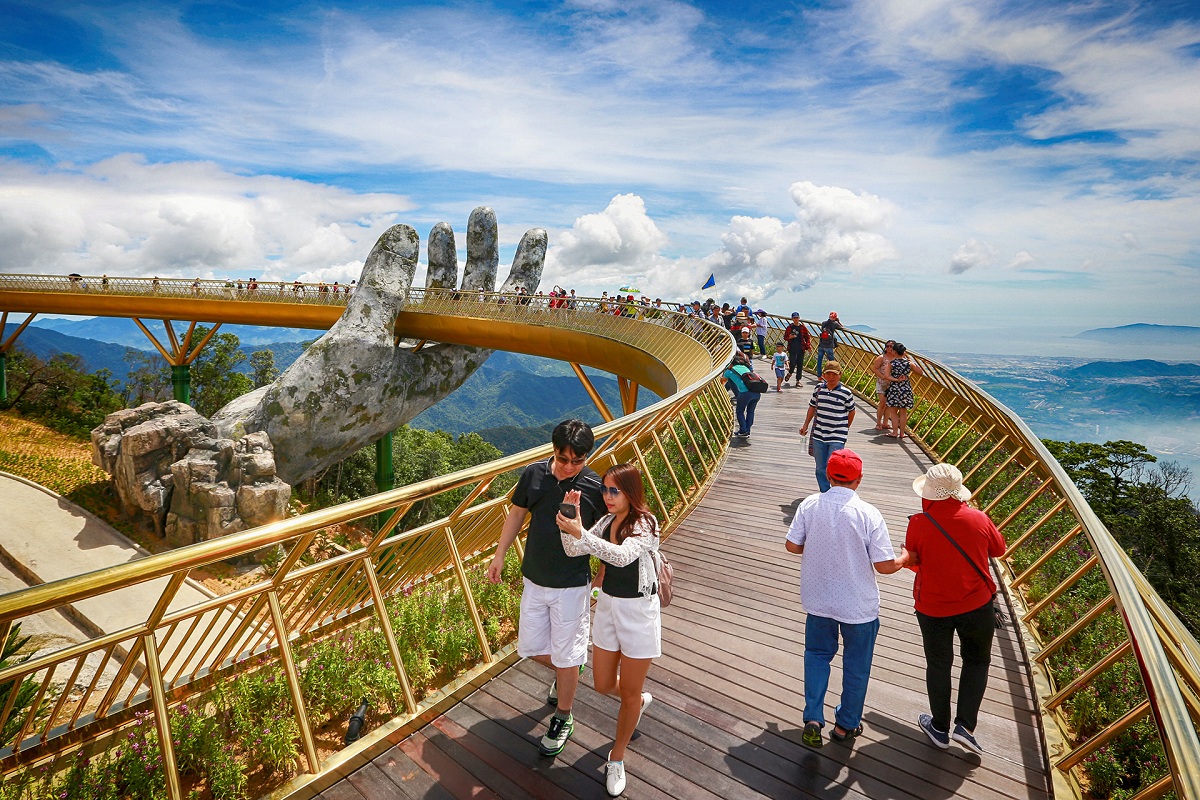 The story of Golden Bridge - A masterpiece in Vietnam

The Golden Bridge (Vietnam) is new architectural construction, which sets the location inside the Bana Hills entertainment – tourism complex. This bridge was built at the height of 1.400m above sea level and stretches about 150m long. The root of the name “Golden Bridge” comes from its gilded railing frame. More than being a pure architecture piece, Golden Bridge has been asserting itself as a new symbol of Da Nang’s tourism since its opening in June 2018.

Tourists flock here to take some pictures at the place where journalists and travel bloggers around the world are praising that being majestic and impressive as a scene in “Game of Thrones” or “The Lords of the Rings”. The image of a huge couple of ancient hands (which is like the hands of the Mountain God) lifting the bridge as a shining golden silk strip, toward the high blue sky with deep green forests below, actually is not inferior to any blockbuster scenes. 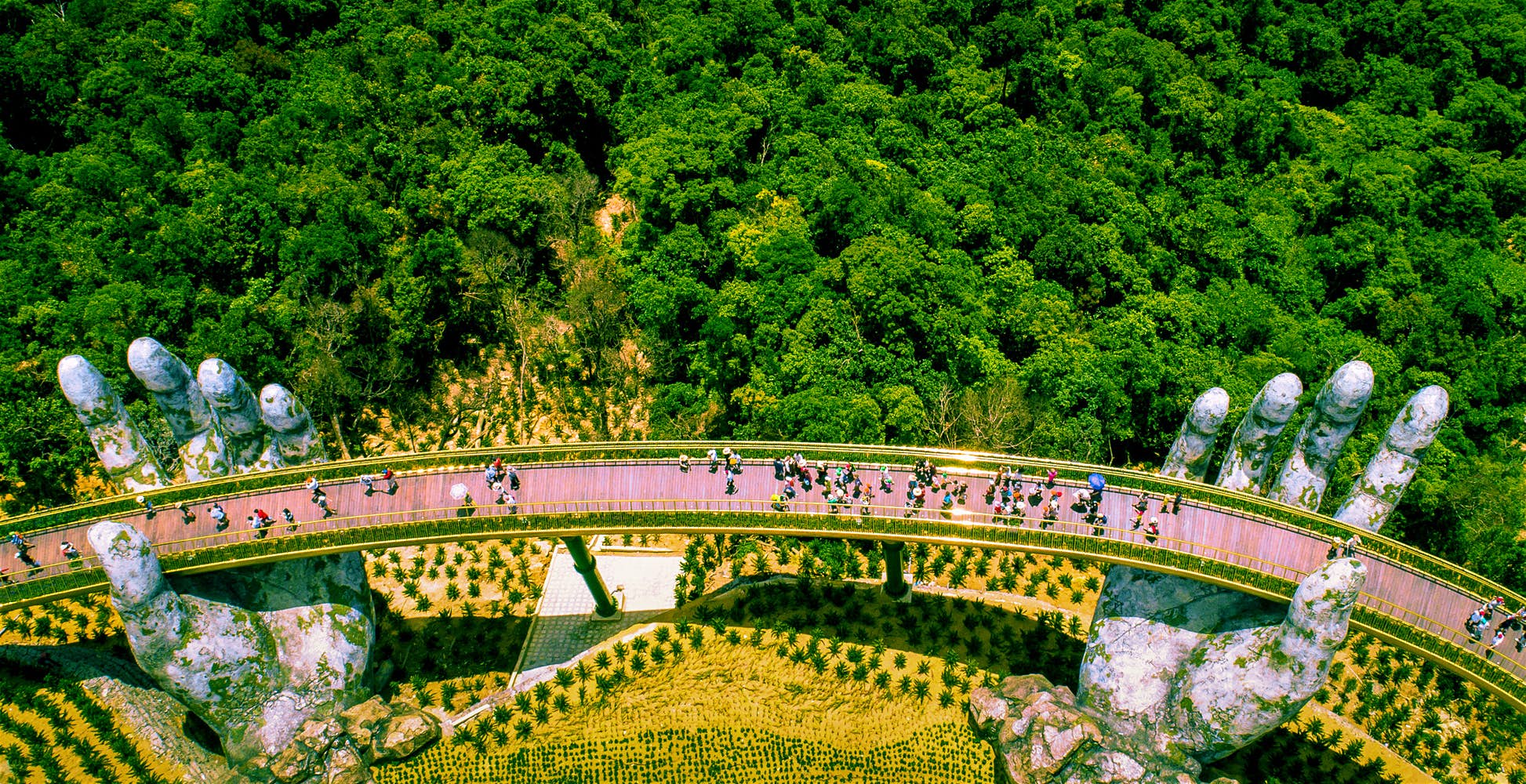 The Golden Bridge from an aerial view

Rewarded with a bunch of architecture competitions all over the world, the Golden Bridge features a harmonious blend of groundbreaking architecture and spectacular nature.

Since its opening, the Gold Bridge, Da Nang has become a host of many big events, especially the “A walk on a cloud” fashion show of Fashion Voyage. Thanks to its out-of-the-world architecture, the Golden Bridge has inspired fashion designers to make superb collections. Besides, the bridge is a favorite spot for many couples to take their wedding photoshoot. 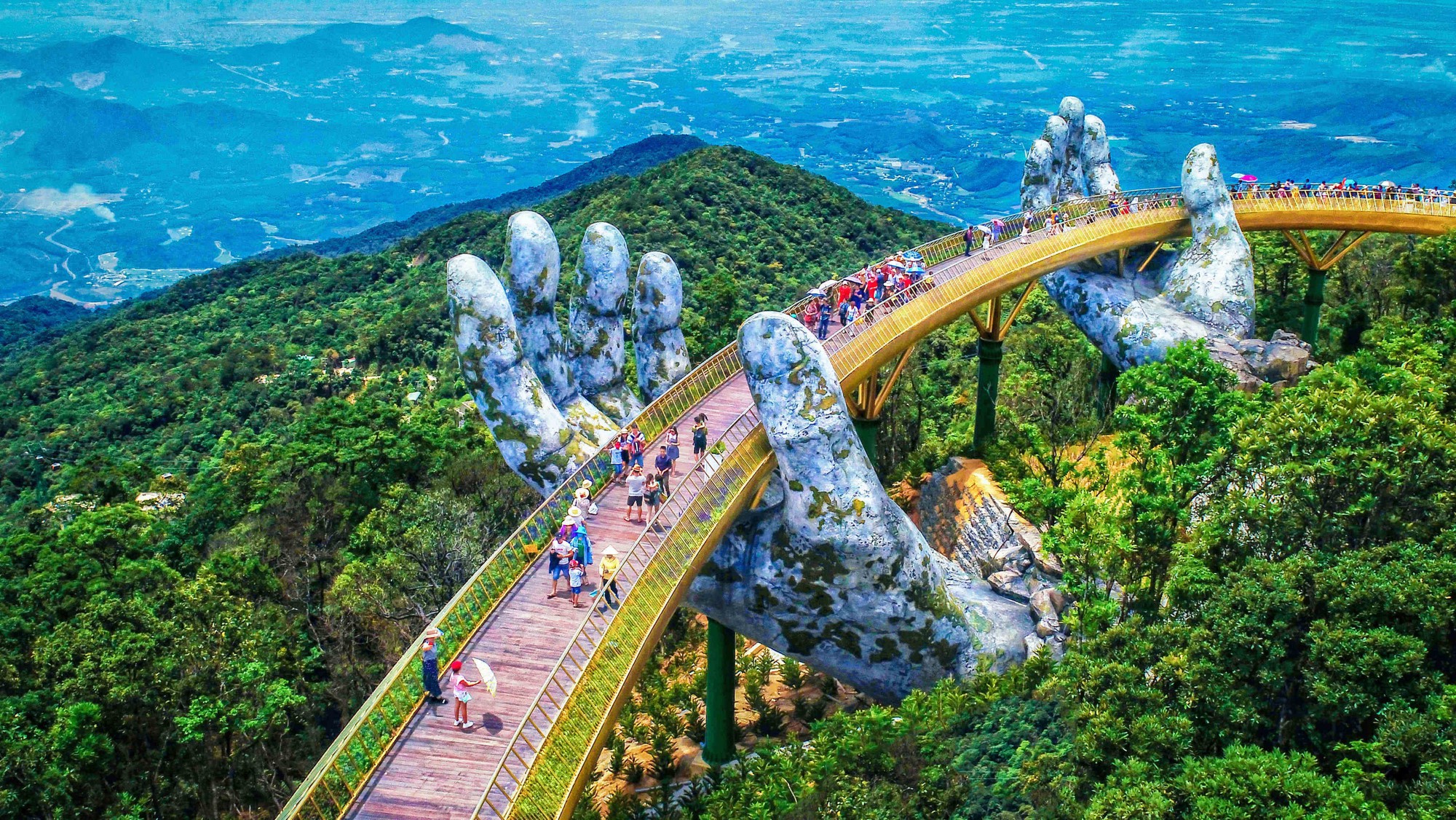 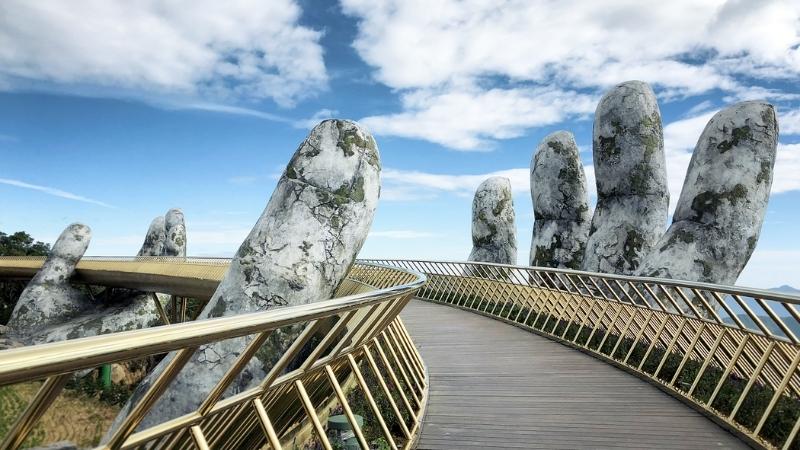 How to get the Golden Bridge, Da Nang

As the Golden Bridge belongs to Ba Na Hills Resorts which takes only a 45-minute drive from Da Nang City Centre, you can easily reach it by car and then take the cable car to the top of Bana Hills. Golden Bridge stays inside the Thien Thai garden playing the role of a connection between the French Village and Le Jardin D’Amour flower garden. 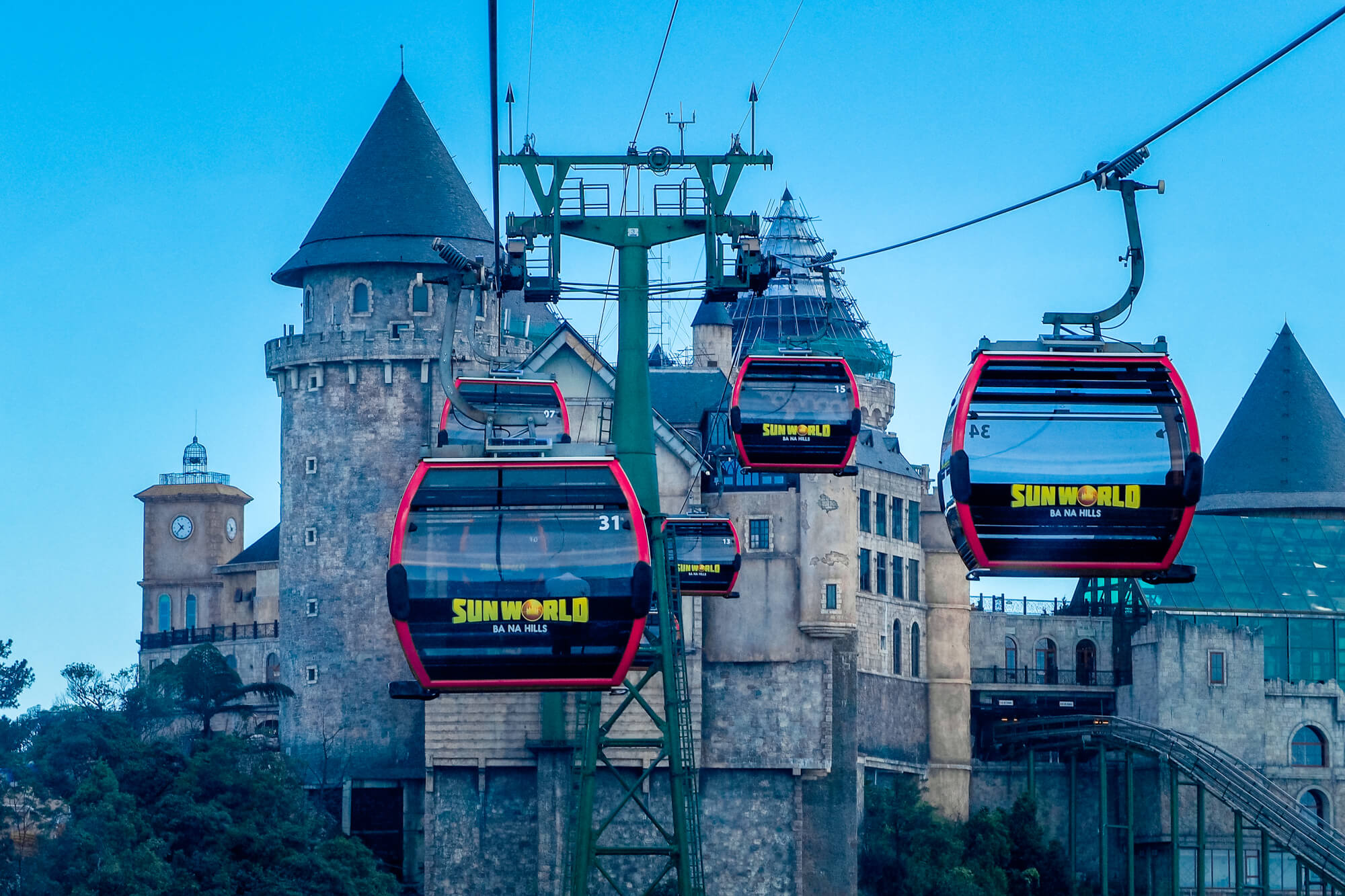 From the 1st of June 2022, the price of cable car tickets to reach the Golden Bridge, Ba Na Hills is:

In addition, the wax museum entrance fee is 100,000 VND (4 USD) for everyone who wants to see the models of world-famous celebrities. You can buy combo tickets online through travel agents to get better deals and instant confirmation.

Let's save your time and budget with a booking of Da Nang Ba Na Hills Cable Car Ticket via BestPrice Travel.

The Golden Bridge in Da Nang opens from 8:00 a.m. to 6:30 p.m. every day. The most crowded hours range between 9:00 a.m. and 5:00 p.m. when many people go there to catch the sunrise and sunset moments. If you want to avoid the crowds, it is best to visit earlier or later than everyone else, particularly before 9:00 am and after 5:00 pm to feel the restful atmosphere under the golden light. 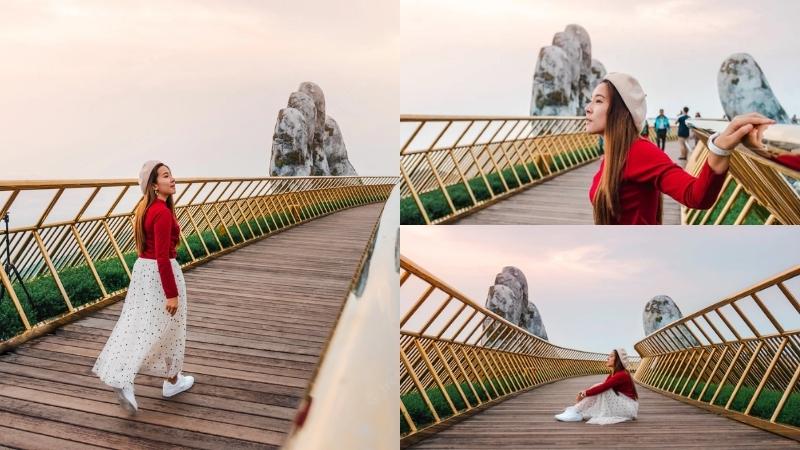 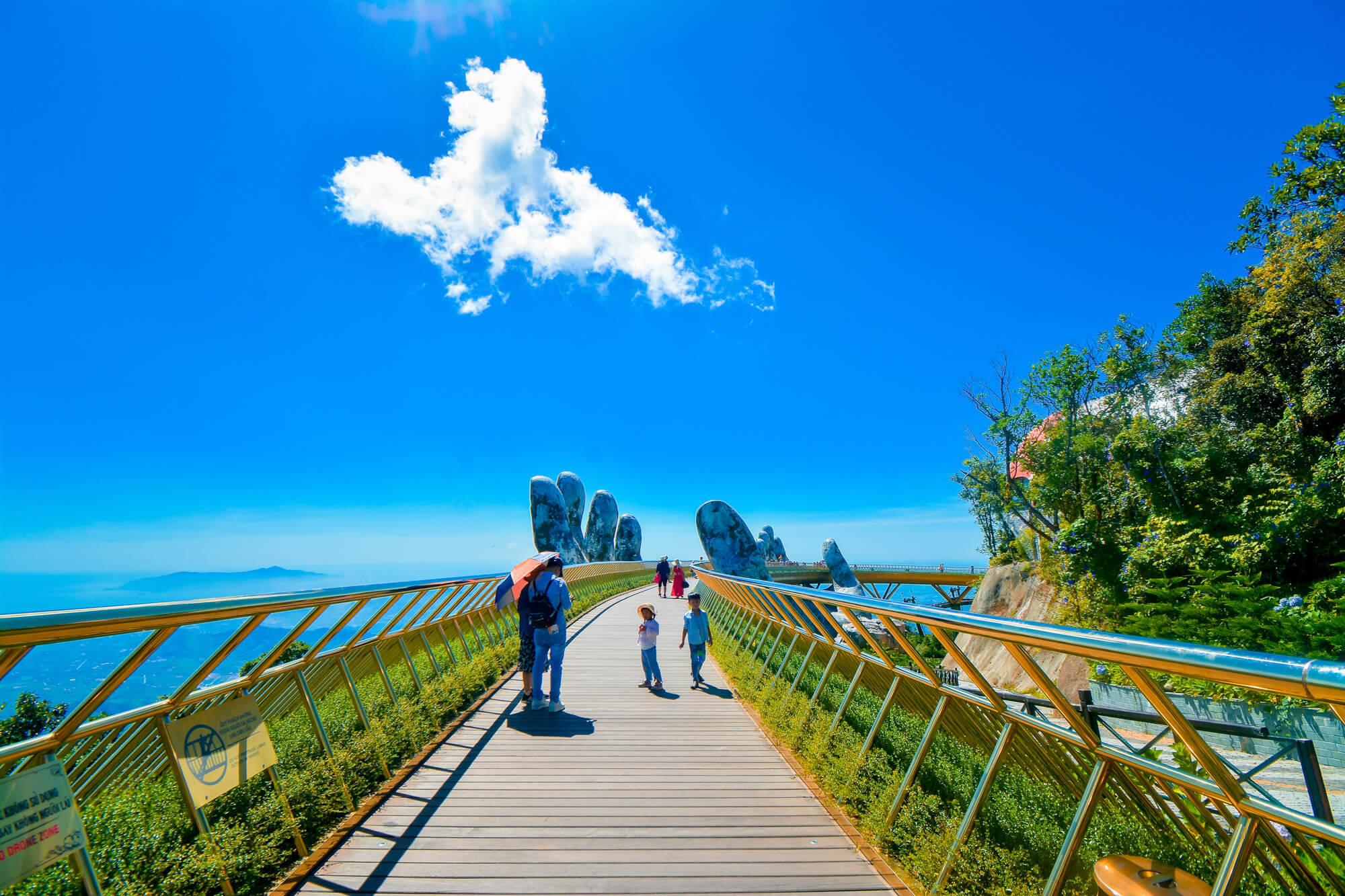 Bana Hills does not have only the Golden Bridge. Normally, a day tour to Bana Hills should be chosen if anyone wants to visit this attraction as there are many interesting activities for visitors to experience around Ba Na Hills complex beside the Golden Bridge such as the Fantasy Park (an amusement park), French Village, flower gardens, Linh Ung pagoda, café and restaurants with different styles, etc. and you can even take a tour around the hilltop by train. 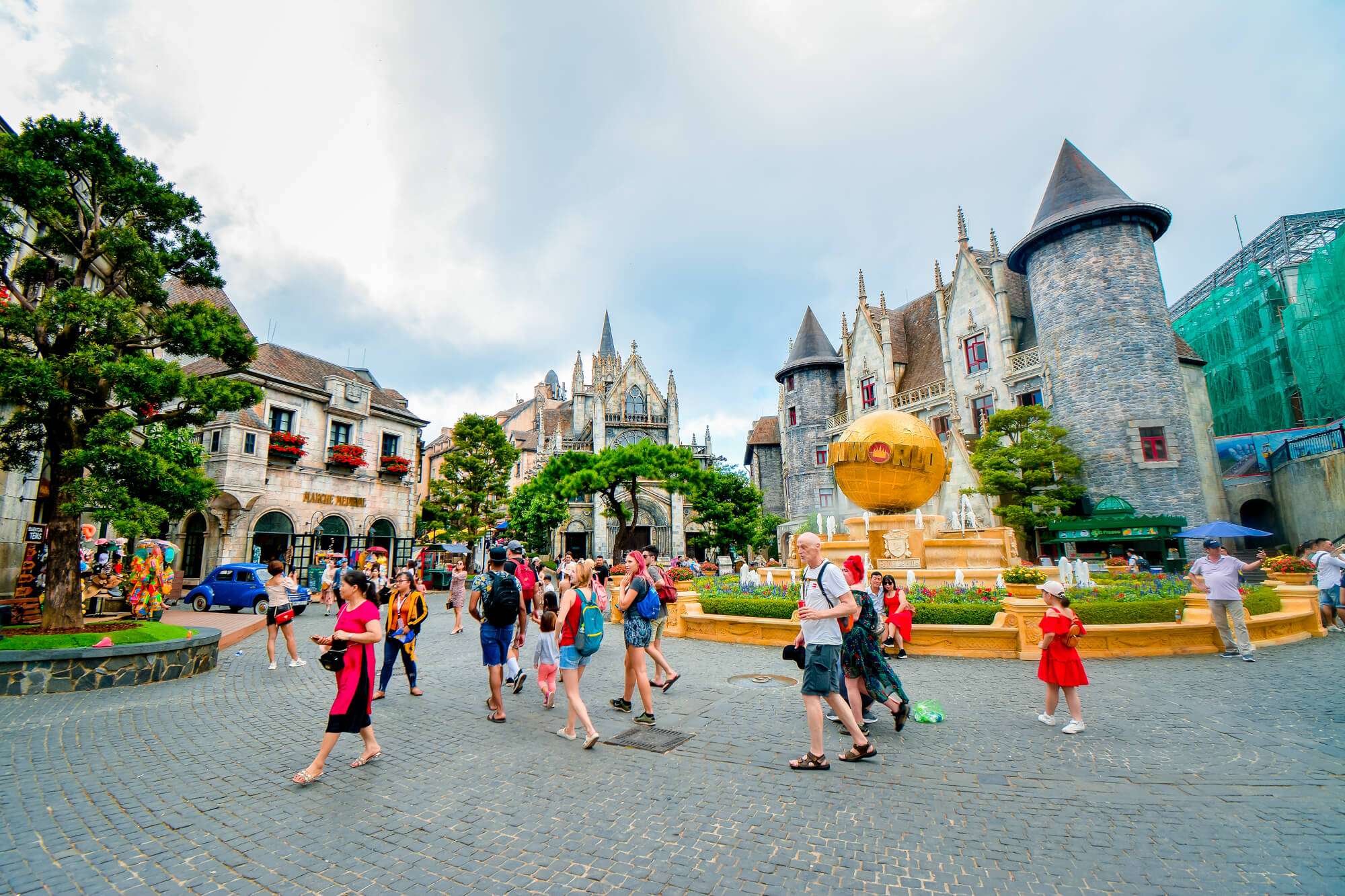 The amusement park in Bana Hills 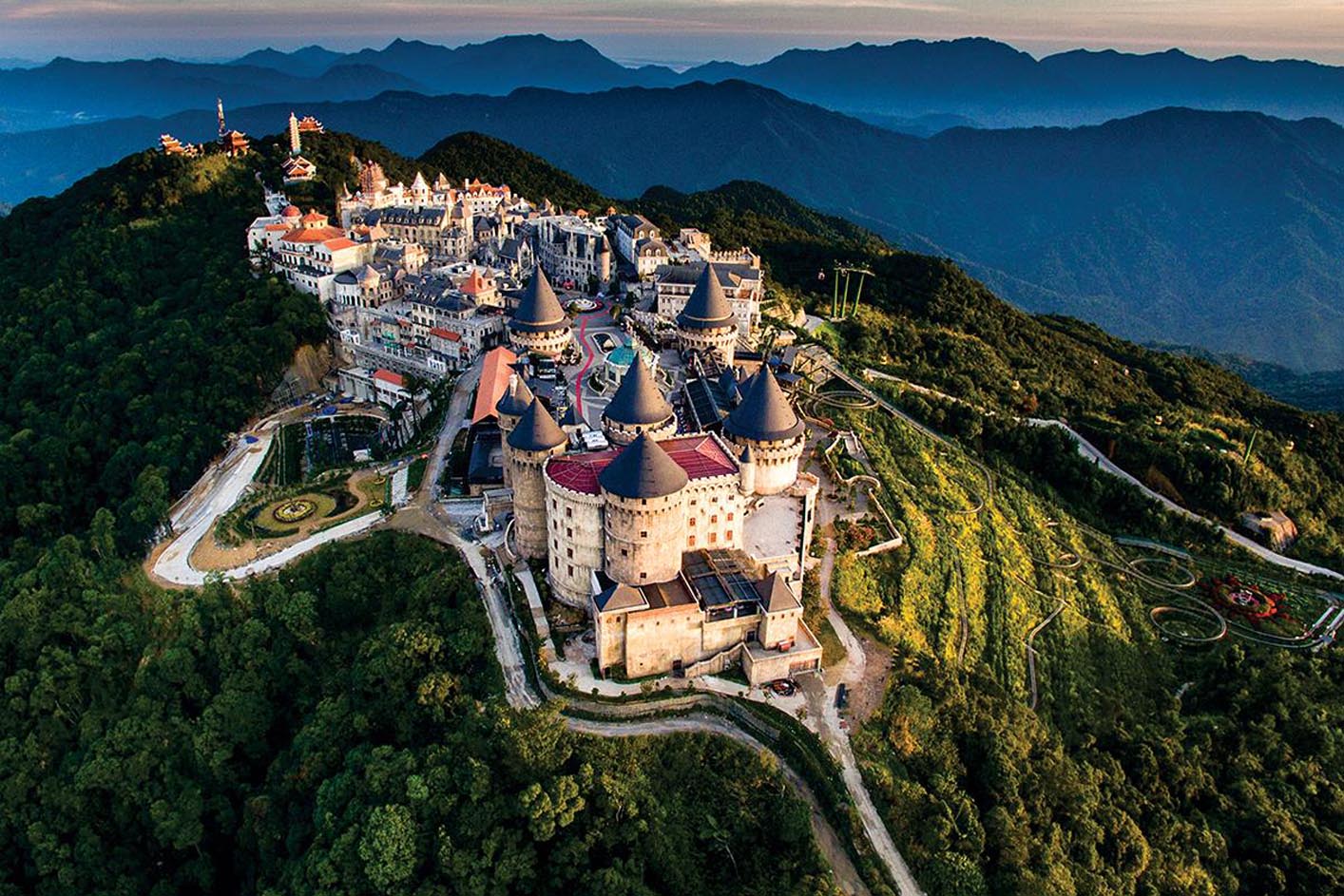 How to take a viral photoshoot at Golden Bridge

The Golden Bridge will be definitely most beautiful and splendid through the FlyCam lens – the only thing at present that can catch the entire of this awesome bridge in a frame. Nevertheless, there is a new law that bans to use of the FlyCam at Ba Na Hills; therefore, cameras and mobile phones will become effective tools for anyone who wants to announce to the world that they visited this famous bridge. 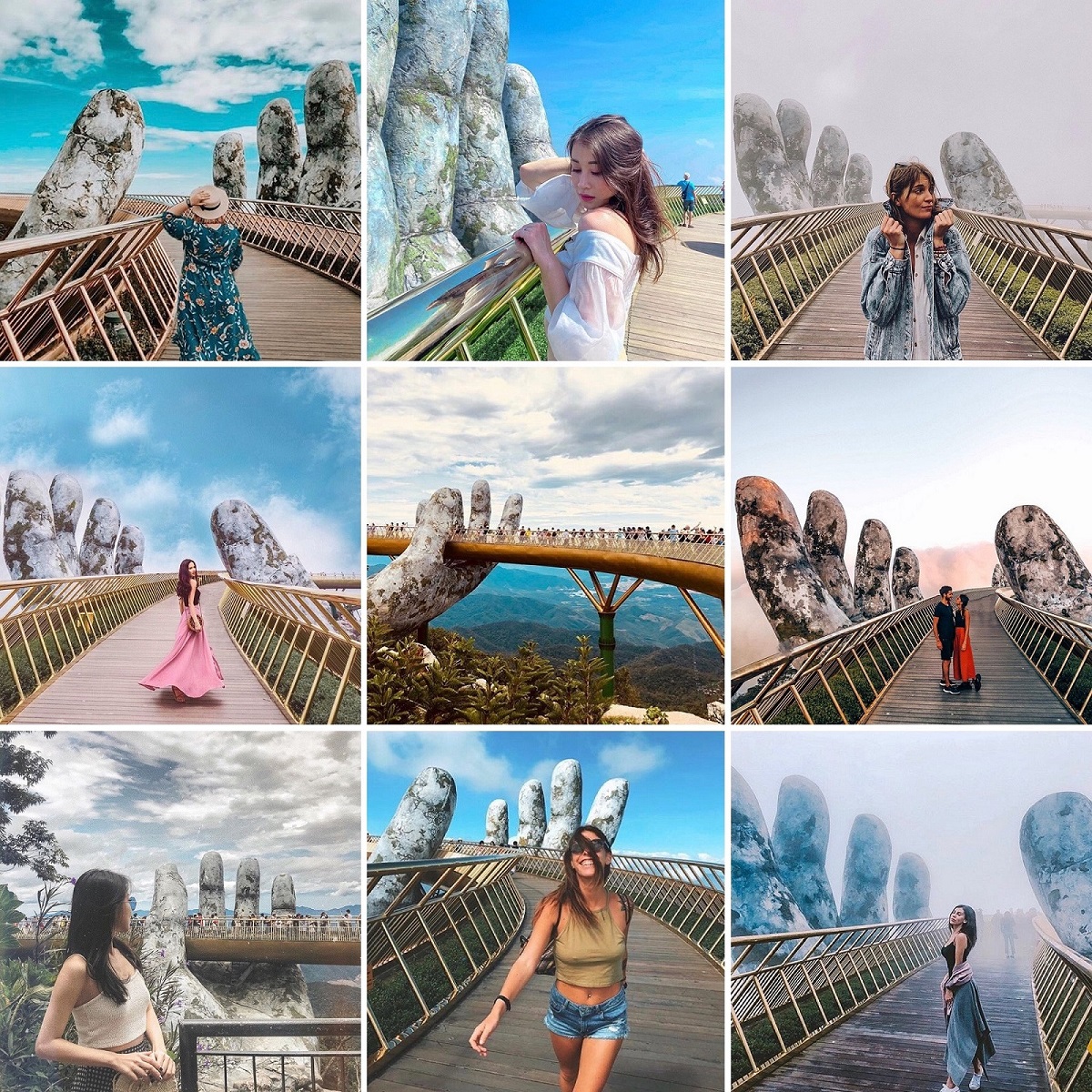 Beautiful spots to take Instagram photos at the Golden Bridge

If you desire to take viral photos and videos of the gorgeous Golden Bridge in Da Nang, find out the best instagramable spots below.

#1 Take panoramic photos from the right/left side

This is one of the best shooting angles for taking a completed Golden Bridge image even though you simply want your own pictures of this bridge, or want to stand with it inside a frame and then show the picture with your happy smiley face to the world, tell them you visited the Golden Bridge that is inspiring throughout social networks. 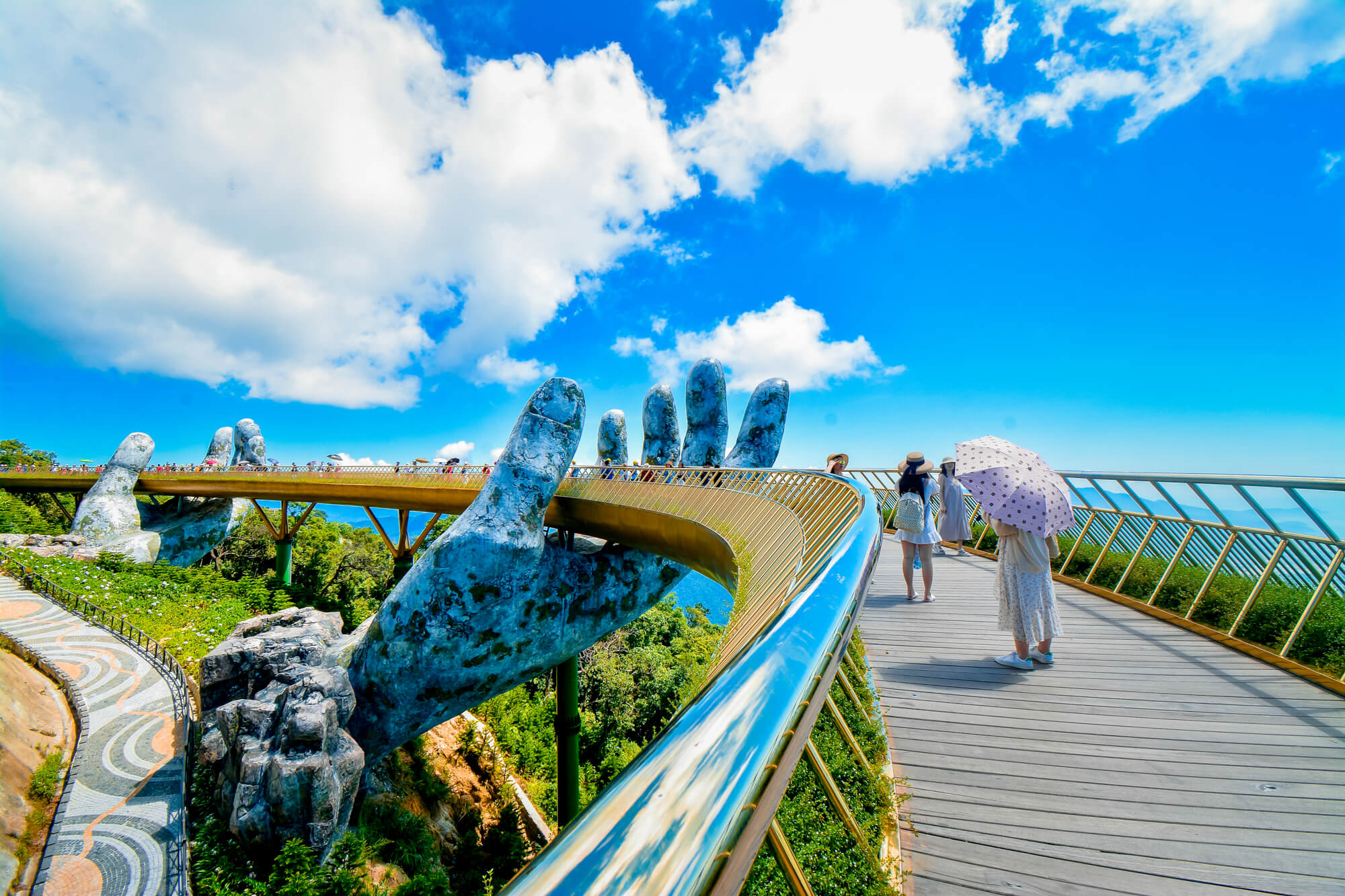 Golden Bridge from the right side 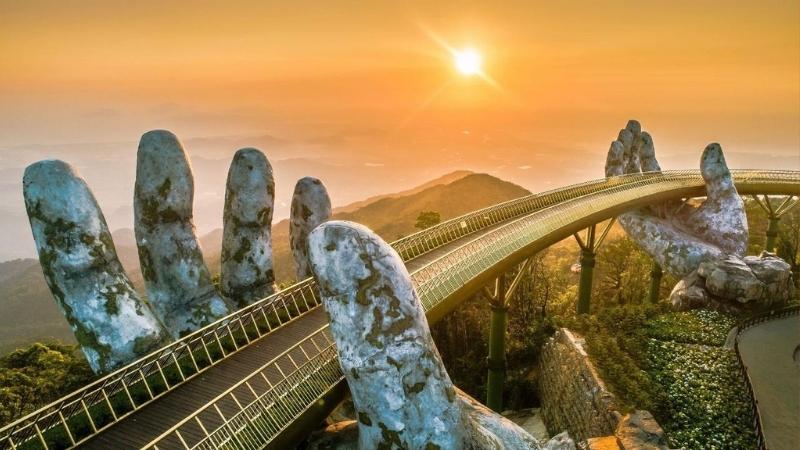 #2 Stand inside a hand

It is a classic posing position that creates the feeling that you are held entirely in a huge ancient hand, making you become a part of the bridge’s grandeur. However, there will be a lot of tourists who also wish to pose right at the position that you want to stand so sometimes you will have to wait a little bit till your turn. But it is worth a memorable picture, right? 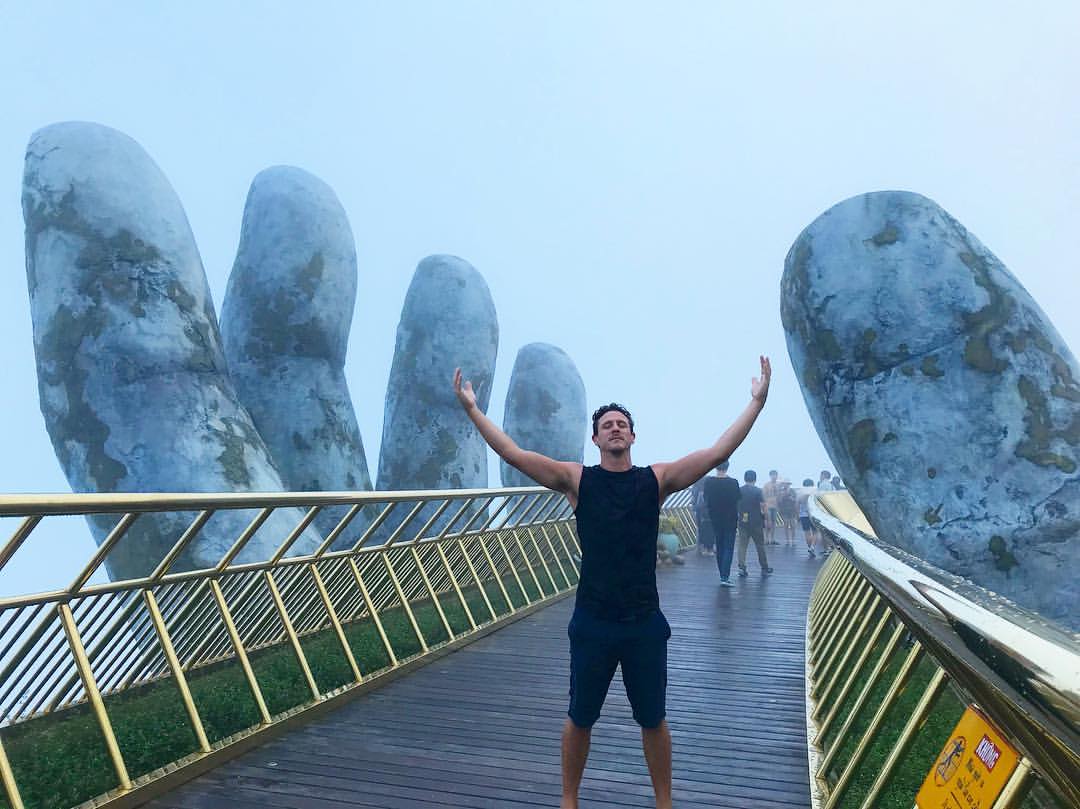 Simulating is a familiar trend when posing with a statue these years. Copying a hand is not difficult but you will have to care a little about the shooting angle if you do not want your hand and the Golden Bridge’s hand to look irrelevant. The usual position for this simulating posing style is that you will have to choose any point which makes others feel like you really are a copy of the statue. Therefore, putting your hand right before the Golden Bridge’s hand seems a very good choice! 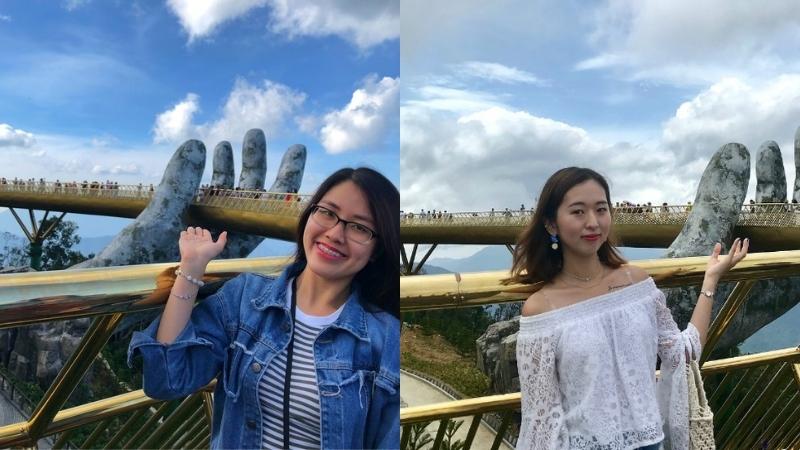 #4 Take photos with your darling

Golden Bridge in Da Nang has become a popular site for marrying couples or lovers to save sweet moments in their photo albums. It is perfect to capture panoramic photographs while couples are walking hands in hands, looking at each other, and giving a sweet kiss. What is better than couples' photos in the romantic landscape of "A walk in the clouds"? 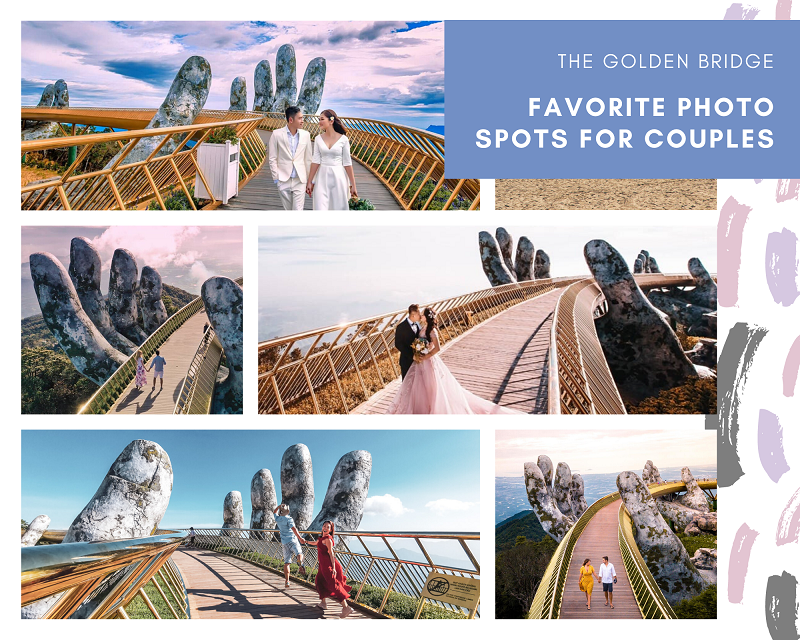 Another must-try style at Golden Bridge is portrait photos while capturing the giant hands from afar. This style is perfect for girls/ women to take solo photos. You can either look directly at the camera or look the other way. 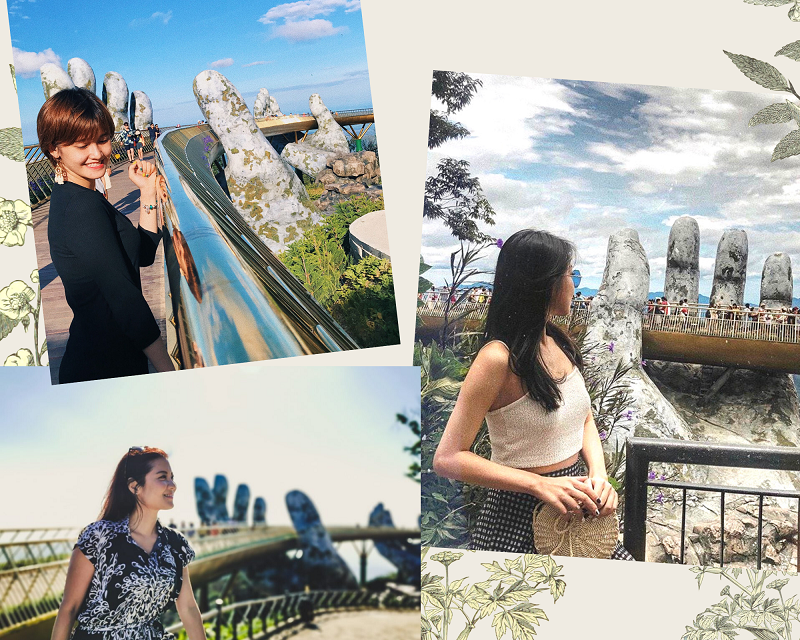 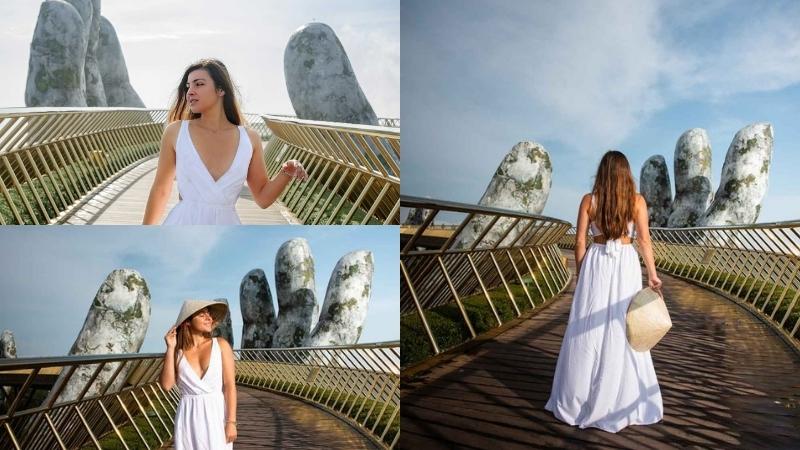 There could be many other shooting angles that cannot be listed and some examples above are just a few basic suggestions for any visitors who want to check in at the Golden Bridge with the most beautiful pictures. However, everyone will have different feelings about this bridge and their point of view about its beauty to create distinctive photographs.

For our beloved travelers, there are many combos of transportation, buffet lunch, and cable car ride, so you can easily find a tour to Ba Na Hills and visit the Golden Bridge. Just plan your Da Nang Tours immediately to admire the Golden Bridge and tell the world stories about your journey with BestPrice Travel! 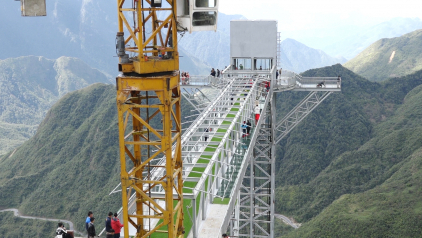 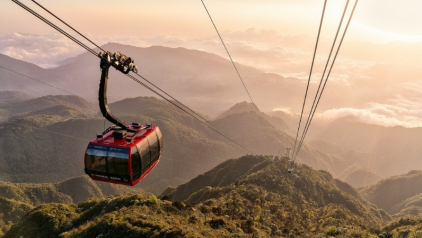 Fansipan Cable Car: All You Need to Know 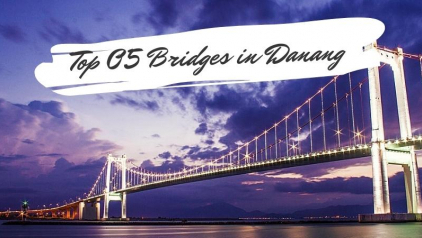