Hoi An Impression Theme Park gives you an overview of Hoi An history and culture via amazing stories delivered in different shows, and different corner of the Park.

Where is Hoi An Impression Theme Park?

Proud to be the first cultural theme park in Vietnam where people can immerse themselves into a space of cultural blending and interact with many colourful activities inside. Being inspired by the passionate love of Vietnamese culture and desire to arouse national pride, Hoi An Impression Theme Park was born to restage the splendours of Hoi An's golden time - a vibrant Faifo where East met West.

Hoi An Impression - Theme Park is considered a vivid, impressive photo exhibition that attracts visitors, unlike other parks. If Old Quarter is too familiar to domestic and foreign tourists, Hoi An Impressive Park will be a brand new destination in this historic land, impressed by unique architectural works and a chapter of fascinating and impressive scene art that you will surely regret not knowing sooner. 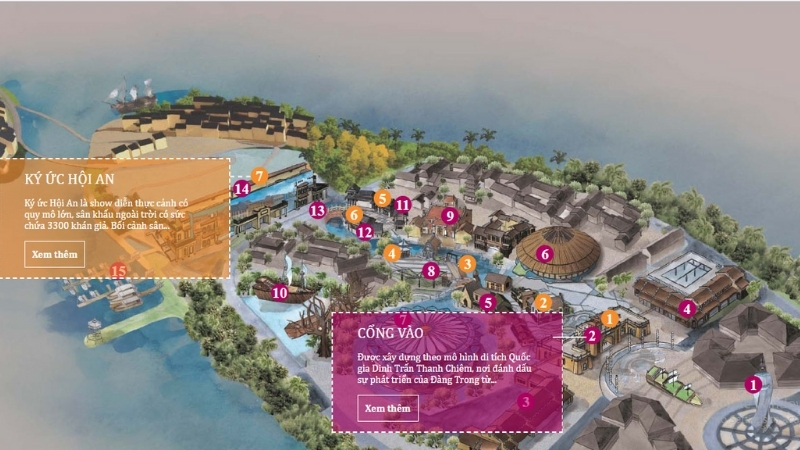 What to do and see in Hoi An Impression Park

Built on a separated island with a large zone, Impression Park has many things to discover and amazing shows that help you have a deeper understanding of Vietnamese culture, local life, and other things. So let’s see what you can do and see in this Impression Park.

Hoi An Trading Port was a busy international commercial gate during the 17th and 18th centuries. From the west, merchants from the Netherlands and France and evangelists from Portugal, among the others, stopped by here and built up commercial firms to buy local products such as additives, tea, china, silk products. So the Commercial Firm in Hoi An Impression Theme Park is built to illustrate a big picture of Hoi An those days.

There were up to about six or seven hundred people in the Japanese community in Hoi An during the 17th and 18th centuries. Japanese culture reflects strongly in works of architecture, culture and cuisine of the Hoi An people. Japanese village is where the stories conveying the Japan-Vietnam relationship are represented.

Japanese and Chinese merchants left cultural highlights in Hoi An. The Love Bridge is a cultural and spiritual symbol of China, Japan and Korea. This is where the lovers can write their names on the pieces of paper attached to the bridge, praying for their love to sustain. The bridge is located at the entry of Chinese and Japanese villages. 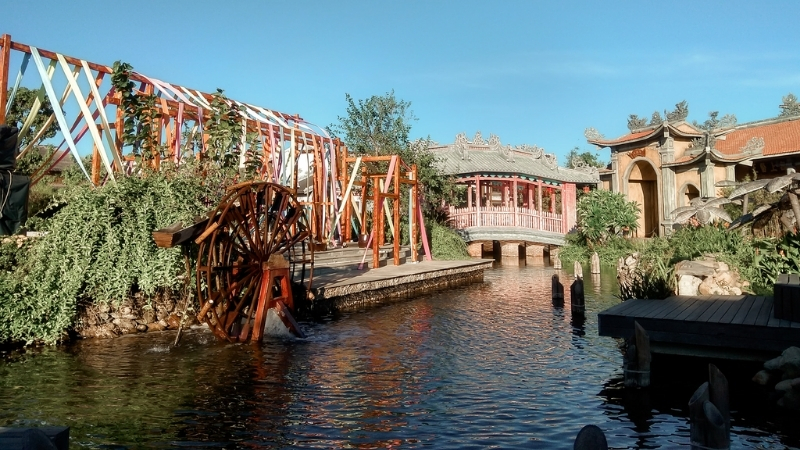 The Love Story of Silkworm Goddess

This is a story of faithful love between Prince Nguyen Phuc Lan and Doan Thi Ngoc, who raised mulberry for silkworm production. However, the poignant historical aspect is that the lady, who becomes known as Silk Queen Tam Tang, is instrumental in promoting silk production and bringing Vietnamese products through the silk road to the rest of the world. On the stage is a giant loom, embellished by colourful strips of silk, hung next to the river, romantic enough to reminisce about their love affair. It’s a visually stunning performance, so don’t miss it.

The love and wedding between Princess Ngoc Hoa and Japanese merchant Araki Sotaro is a landmark of the Vietnam-Japan relationship. Their solemn wedding is recreated in the Japanese town on a very monumental stage. The traditional Japanese fan dancing is followed by an emulation of the proposal, the offering of betrothal gifts, and the wedding ceremony, all in a cheerful, joyous atmosphere.

The Champa Ritual Dedicated to The God of Water

Inspired by the Champa ritual dedicated to the God of Water at the ancient well on Cham Islands, this show presents the beauty of the colourful and unique culture of indigenous peoples living in the land of Quang Nam.

“Trai Ho fighting the tiger” is a local tale about Trai Ho, a native of Quang Nam, who bravely battled a fierce tiger to bring peace to his people when Quang Nam province was on bare land. Similarly, the show symbolizes the heroic traditions and courage of the Quang Nam residents. You are really into the show, thanks to the state-of-the-art sound effects and 3D mapping technique. It is sure to awaken all your senses and give you an enjoyable experience.

More than 500 professional performers on a 25,000 square meters outdoor stage, an outstanding combination of visual art, music, poetry and human make Hoi An Memories – a Vietnamese storey being told by Vietnamese people, a locally-made arts creation deeply embedded with Vietnamese cultural and historical elements. In this show, you will have a chance to see the artists restaging the stories of the Hoi An creation, local people's daily life, the cultural integration of Hoi An from the past until now, and the current Hoi An with the beautiful image of Ao Dai dance. A Memories show is truly Vietnam’s Must-see cultural spectacle which relives the stories of heritage. 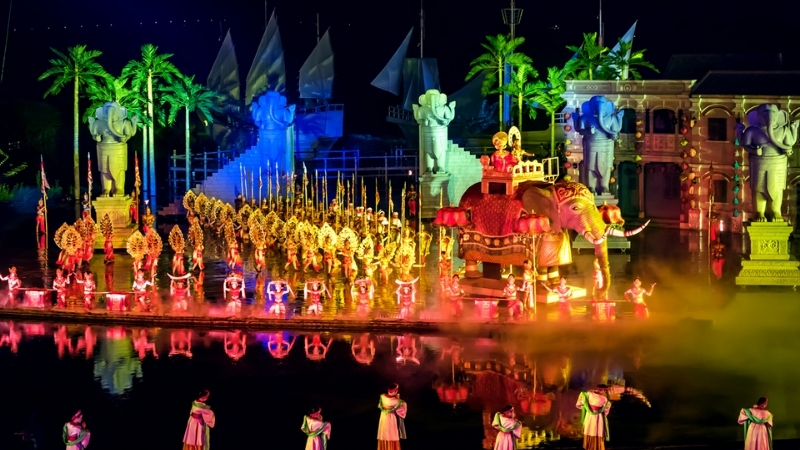 Impression Theme Park is an astonishing place that we highly recommend to you if you have a chance to come to Hoi An. The Theme Park is really amazing, and you will surely regret it if you have to leave Hoi An without watching the Memories show.