Hoi An memories show is the largest performance in Viet Nam and can be compared to an Olympic Games opening ceremony. Coming to the show, you are invited along a 400-year journey of the town’s growth. Here’s some brief information and tips for you with this Hoi An memories show.

Hoi An memories show is a world-class outdoor visual art performance with a 3,300-seat theatre and over 500 professional dancers and actors. 25,000 square meters, the stage Itself looks like a Hollywood stage. The show itself is on an artificial island on the Thu Bon river in October 2017. After a short period, a 2.0 version has been launched in May 2018 with lots of improvements in story content, art, cultural identity, etc. This majestic cultural performance will take you on a historical journey from the beginning of Hoi An, from thousands of years ago until now. The show is divided into 5 parts.

Life is the beginning of the show, the start of everything will reappear the colorful picture of the costume, culture, and life of Hoi An people 3,000 years ago, fishermen started to build houses and settle down. You can see the town began from a small fisherman’s house with his family and around them, Hoi An bloom from the earth. 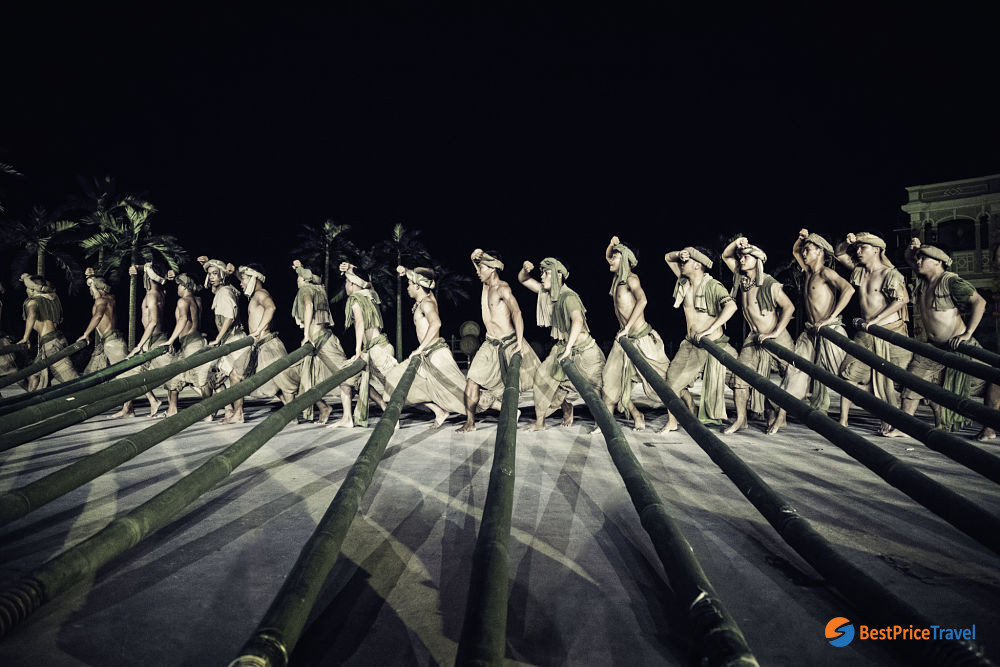 A scene of local daily life at Hoi An memories show

This scene portrays the happy wedding of Princess Huyen Tran and King Che Man in the past. This is an impressive performance but realistic against a backdrop of Cham Pa temples, dances, towers, etc. You will feel like you are attending an ancient wedding. Costumes are also various and colorful with Cham culture. And of course, a wedding of the royalty must have an elephant – the symbol of Cham culture. 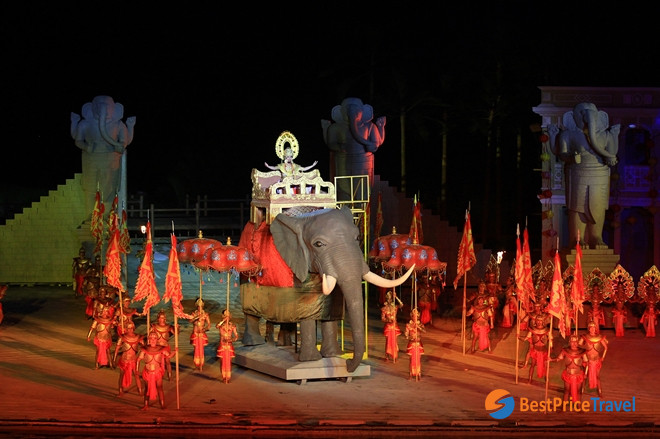 This is a scene of a faithful wife desperately waiting for her husband who is a sailor who has not come home for a long time. She turns into a stone statue. At the end of the story, the man returns, feeling wretched, he writhes in anguish beside the statue. This touching story is not told by words but by hundreds of professional dancers in traditional, colorful costumes.

This part represents Hoi An trading port of the 17th century on the stage along with traders from Japan, China, Holland, France, India, etc. They have their business and join the local festivals. This is the main point of the show. You can see the glorious time of Hoi An in the past and enjoy every detail which has been well prepared by the crew. 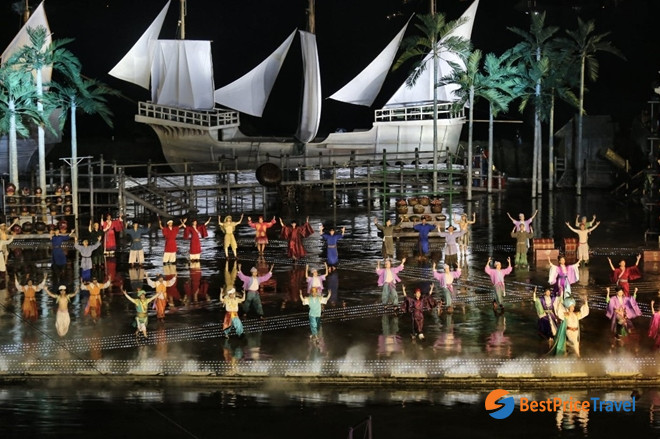 Hoi An Trading Port in the 17th Century

Hoi An is one of the very few cities that still keep almost everything in the past through the up and down of history. That makes the priceless value that Hoi An people can be proud of. The end of the show is an Ao Dai performance with many ancient structures of Hoi An. All of the values have been well preserved until now.

Hoi An memories show had smashed 2 Vietnamese records: The country’s largest outdoor visual art performance and The daily show with most actors. It took nearly 2 years to produce a one-hour show which runs every night. Foreign tourists absolutely love the show, some of them said this is the most spectacular show in the world. “Hoi An memories become a global phenomenon” according to Reuters. This show also has a lot of 5 stars reviews on the biggest review website Trip Advisor.

Every tip you should know about “Hoi An memories”

The show takes place in Hoi An Impression theme park located on an artificial Cam Nam island in the middle of the Thu Bon river. It is pretty close to the Old town, just about 2-3km. You can choose either vehicle or a walk. If you catch a taxi from the old town, it will cost you about 35.000VND (about $1,5). If you drive yourself, you should follow Hoang Dieu street through the town and then cross the bridge onto Cam Nam island. After crossing the bridge, take your second left and go until you see the sight of the show.

If you ride a bike or walk, after crossing the bridge, take your first left, and you will have a chance to go on a scenic road along the riverbank. Follow the river until you see the sight of the show. Security guards will show you where to enter the island.

The show is held every night except for Tuesday. The duration is 1 hour 15 minutes from 19:30 to 20:45 unless there is bad weather.

Hoi An Memories show has 3 classes of tickets based on seat position. The price for children is from 13 USD and adult tickets are from 24 USD. You can book the ticket in advance and pay it off online to avoid the waiting line in front of the gate. Let's grab your Hoi An Memories Show Ticket at BestPrice Travel to save your time and budget now.

"Hoi An memories" show is a grand spectacle of such phenomenal scope. There are not many shows like this in the West. It is an experience you should have at least once in your life, sitting outside, watching this visual extravaganza on a balmy Hoi An evening.

Afterward, Hoi An memories show will bring you closer to the Vietnamese unique spirit and timeless traditions.

It's time to plan your visit to Hoi An to see how magnificent the Hoi An Memories Show is.