Tonkin Show – The Quintessence of Tonkin

Welcome to the North of Vietnam – the land owns richest culture in this country. If you come here to seek Vietnamese cultural values, then after a long journey in this land, choose Tonkin Show – The Quintessence of Tonkin as the perfect ending for your time in Vietnam.

On the other hand, this show can also be a beautiful opening for your trip in Vietnam as an interesting start of the unique story about Vietnam.

The Quintessence of Tonkin (or Tonkin show) is the first “real-life performance” in Vietnam with the participation of 250 performers including 120 amateurs who are actually farmers in the day-life and from nearby villages. The show is performed entirely on the water with mini-scenes and properties moving flexibly with special techniques.

This show is the sweet result of 10-year effort with non-stop working and development from the production team and inspired by the cultural art with peaceful old life of Vietnamese and the Buddhism story of Tu Van Hanh monk – one of the most respected master of Vietnam Buddhism and the founder of Thay pagoda (a pagoda has hundreds of years of history and is one of the most popular pagodas in the North of Vietnam).

Separated into different sections, the show remakes the most typical details of ancient Vietnam. As a country which develops from agriculture, the life of farmers is the factor that is exploited most in the show. Throughout the program, the audiences will be explored the daily life of Vietnamese farmers with the stage of plant and harvest activities, crews of fishing boats, countryside fair full of traders, hawkers on their bikes, the voice singing a lullaby from a mother, etc.

Besides the farming daily life, the Tonkin show also brings a part of the ancient Thang Long Citadel from hundreds of years ago to its water stage with the scene of students with wooden book box and bamboo tent from different part of the countries come to the citadel for the most important examination in their life which decide their career in the near future. After the examination, some candidates fail and a few can pass and only one of them becomes the valedictorian which leads to the majestic scene of Thang Long royal palace with the ceremony to congratulate the valedictorian and the king gives him the dynasty apparel and a working position in the government. 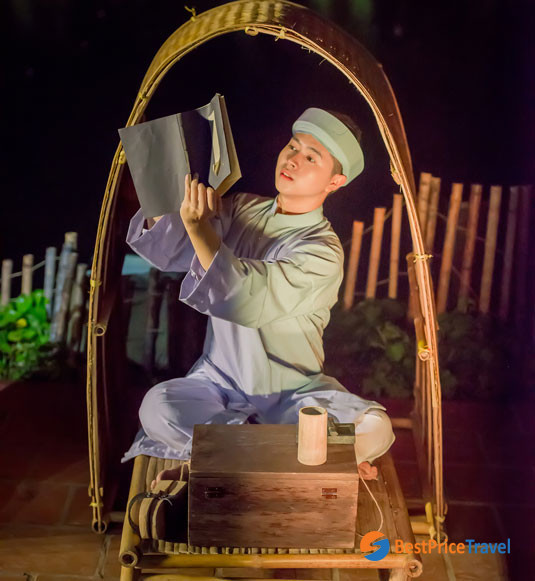 A Student In The Examination

Traditional art is a must-using material for the show. The music used in the show was created with the inspiration from Vietnam fork music with the melody from many types of traditional instruments such as Sao (flute), Ty Ba (Pipa), Dan Tranh (Zither), Dan Bau (Monochord), etc. Besides the background music, many scenes in the show were inspired by Vietnamese ancient idioms, proverbs, poetries, and even the famous fork painting set: Tranh To Nu which includes 4 pictures painted 4 ladies performing 4 different traditional instruments. In addition, there will be also a short water puppet performance – the world-known interesting Vietnamese traditional folk art, to tell the audience a religious story about Tu Van Hanh monk who created this special art. 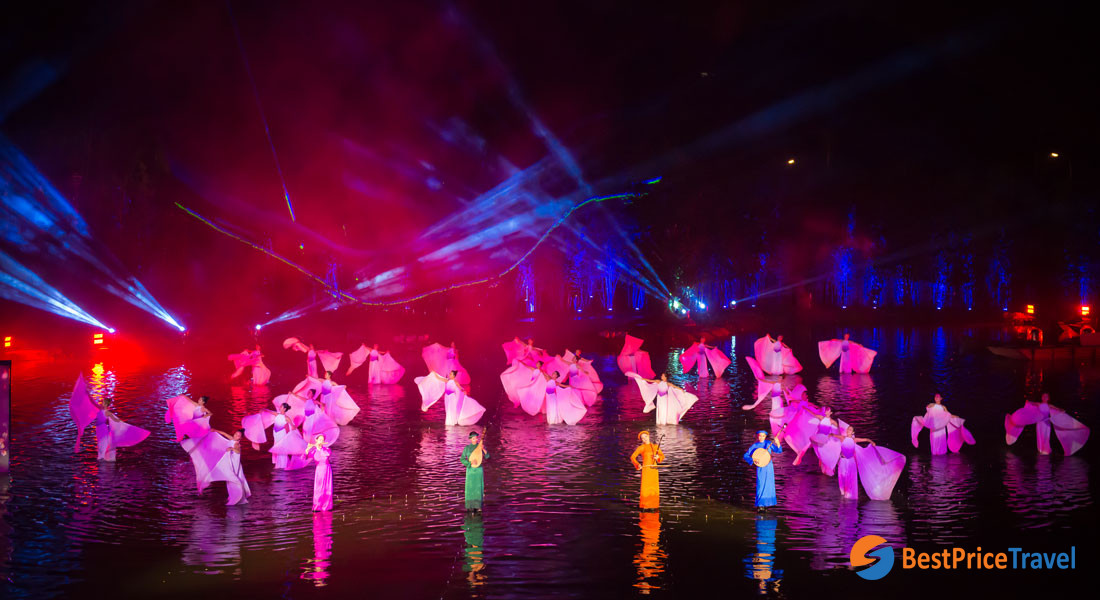 A Scene Inspired By To Nu Painting Set

Vietnamese has plentiful religious life with different beliefs. Through the ancient culture of Northern Vietnam, there are 2 main beliefs: Buddhism and The Third Holy Mother & Mother Goddess. Audiences will be witnessed the image of Tu Van Hanh monk covered by the gold light of Buddhism with a small copy of Thuy Dinh Pavilion at Thay Pagoda - where Tu Van Hanh was the abbot.

The belief of The Third Holy Mother & Mother Goddess is assumed that came from the agricultural culture in Vietnam. For thousands of years, the farmers have believed that these saints are the ones who give them an affluent life by creating good weather for abundant crops. And this also the reasons for most of the festivals in the North of Vietnam as every year, in spring, after the Lunar New Year Eve, many Northern villages continuously organize their own festivals as a thanking ceremony to the saints. In the Tonkin show, audiences will have a chance to watch a typical part of The Third Holy Mother & Mother Goddess worship activities and festivals in the North of Vietnam.

The show is about 1-hour driving from Hanoi. Guests can reach it by car or taxi; however, as most of the drivers do not know exactly where the show is, there is a better choice for people who want to enjoy Tonkin show – shuttle bus. Each performance night, the show always offers a shuttle bus (a big modern 45-seat bus) for the audience at cheap price: only 80,000 VND/person (about USD 3.5/person) and it start at 5.30 p.m. from Hanoi Tower (49 Hai Ba Trung, Hanoi). Please note that the shuttle bus choice is only available for the group under 11 people. 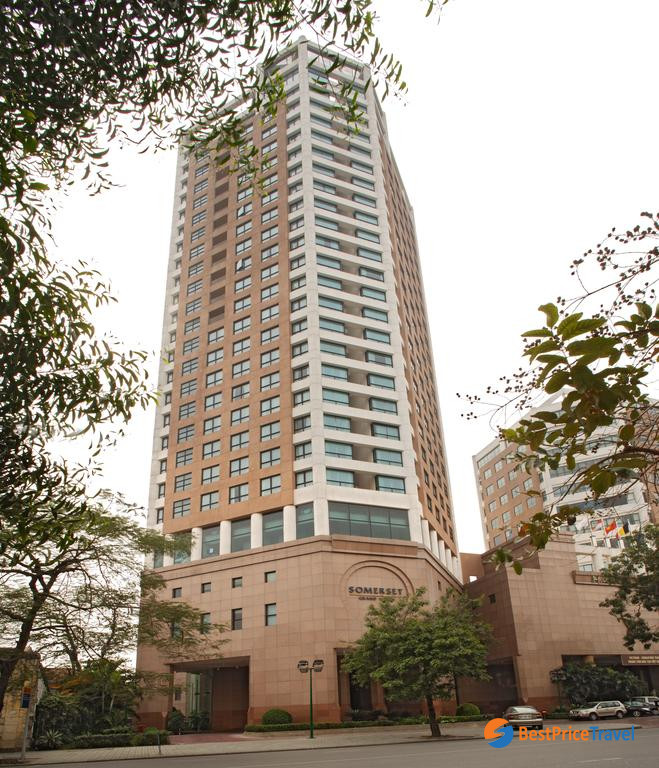 If you love art and culture, don’t forget to spend one night for Tonkin Show as it not only has the ability to bring you back to the old-time of Vietnam but also can take you near to the long-standing cultural values of the Northern Delta.