Kbal Spean is an Angkorian era archaeological site set deep in the jungle on the Kulen Mountain, 49km to the northeast of Angkor in Siem Reap. The site consists of a series of stone carvings in sandstone formations carved in the river bed and banks.

Located in the proximity of Kulen Mountain, Kbal Spean is named after a natural rock formation, resembling a bridge across a river rises from the Kulen Mountain that flows through Siem Reap and into Tonle Sap Lake. Kbal Spean features the distinctive details of Hindu scenes and the most elaborate of all the ancient Angkor temples.

Discovered in 1969 by a French researcher Jean Boulbet, the site is known for a series of stone carvings in the riverbed of yonis and lingas depicting many Hindu mythological scenes and symbols. Thousand lingas carved in the riverbed gave the name to the river valley as "The River of a Thousand Lingas". 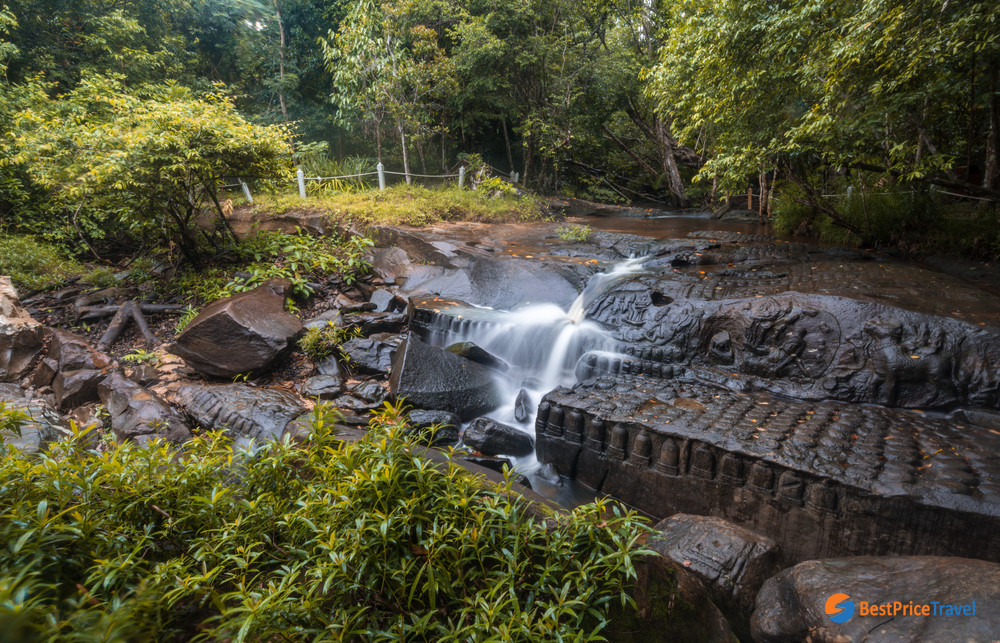 Stone carvings in the riverbed of Kbal Spean

The motifs for the stone carvings are roughly three: myriads of lingams, depicted as neatly arranged bumps that cover the surface of a rock; lingam - yoni designs; and various Hindu mythological motifs, including depictions of gods and animals. Lingams are phallic representations sacred to Brahmanism as symbols of fertility, and one can found hundreds of them carved into the rock here. The belief is that the lingas "fertilize" the water that feed the East Baray and irrigates the rice fields.

Stone carvings in the riverbed of Kbal Spean

The best way to explore Kbal Spean is taking a short jungle trek, along the river through stemy forest and some natural rock formations. It’s great to visit between July and December to avoid the drying up of the river. Keep in mind the access to the trail is not allowed after 3:30pm, so the site could be combined with Banteay Srey for a day trip.

From Banteay Srey, you can find a muddy or dusty trail, depending on the time of the year, leading to a foothills and a moderate uphill hiking of about 45 minutes before one can reach the Kbal Spean.