If you are spending vacation in Yagoon and also interested in learning the culture of Myanmar, the National Museum of Myanmar should be in your to-go lists. This is the main museum of Burmese art, history and culture in Myanmar.

The National Museum of Myanmar is a treasure chest of priceless stone inscriptions, documents, carvings, paintings and a host of other artifacts that testify to the ancient culture and civilization of the Myanmar people. Visiting this museum enlightens one with greater knowledge and understanding of beautiful the Myanmar nation and its people. 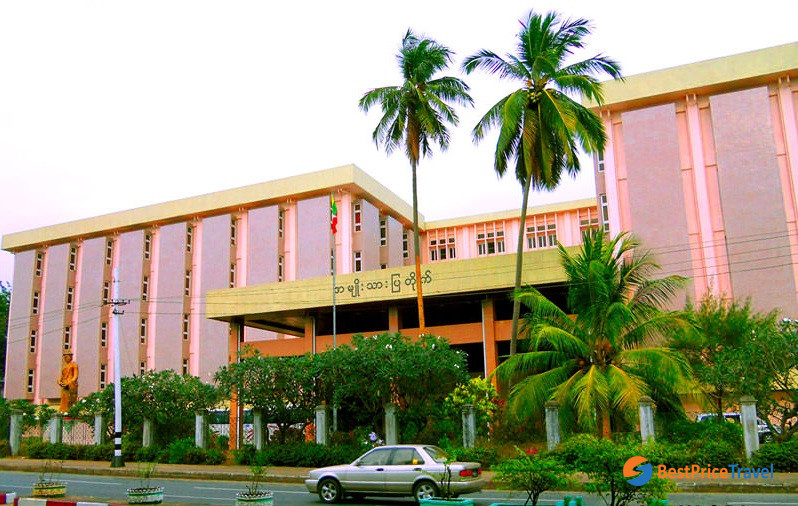 The National Museum of Myanmar in Yangon city

The National Museum of Myanmar was founded in 1952 with the facility where used to be the Holy Year Hall. In 1970, the museum was moved to a more spacious building on Pansodan Street. But these facilities were not originally built to house a museum. The current National Museum is located on Pyay Road in a magnificent five-story building built for the purpose of spacious grounds and special landscapes. Priceless artifacts, historic art and memorabilia are displayed in 14 halls of the four floors. Three ground-floor halls hold exhibitions on the development of Myanmar scripts and alphabets, with Lion Throne room and the Yatanabon Period pieces. 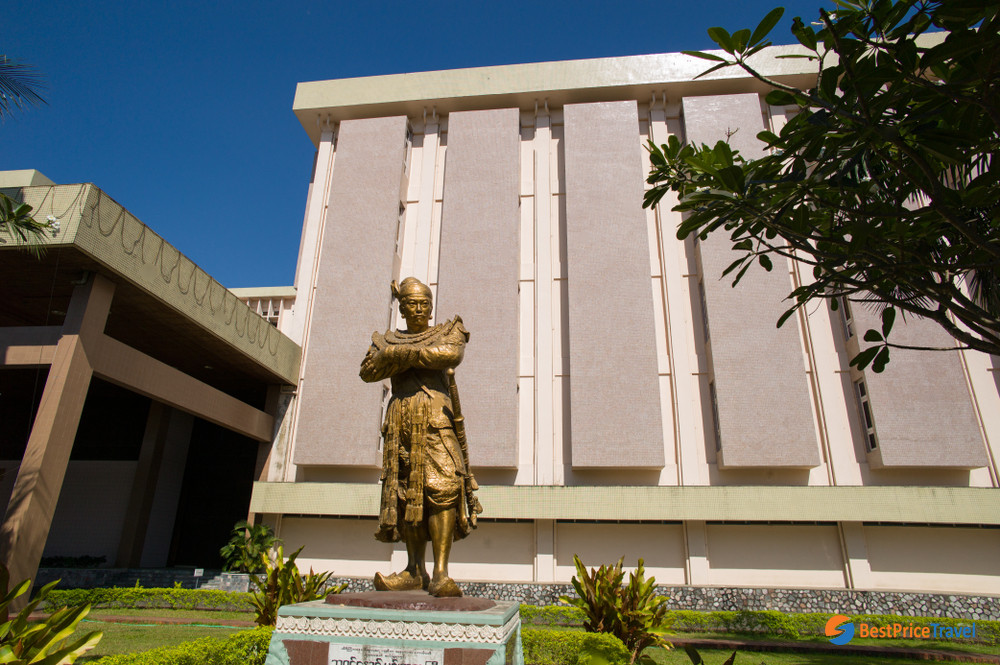 The Statue Of King Anawratha at the National Museum of Myanmar 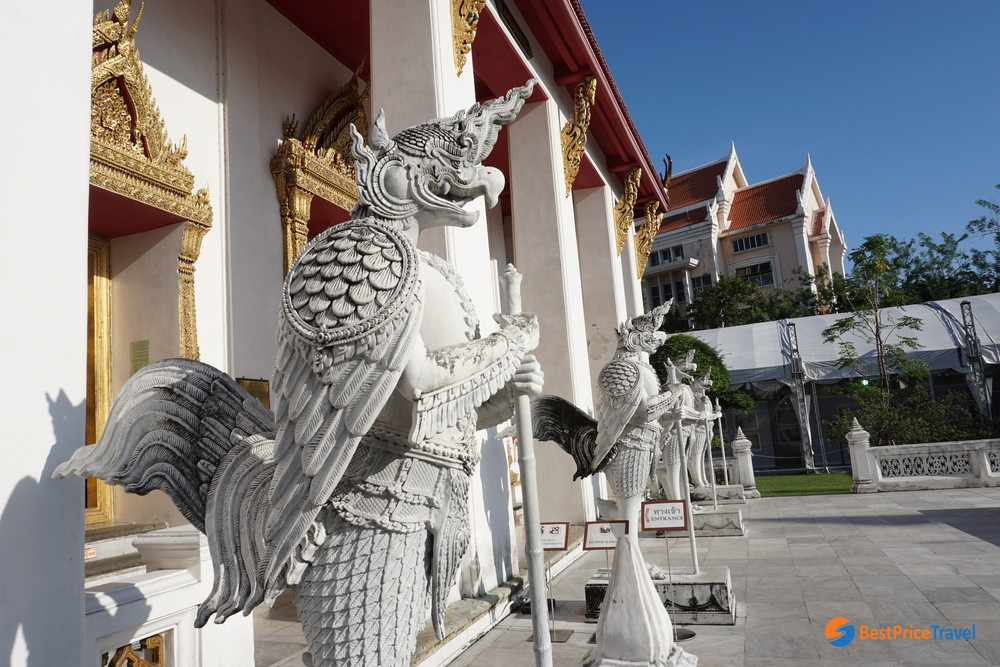 The Garudas at the National Museum

On the ground floor, visitors can study the origins of the Myanmar alphabet, Myanmar script and literature as well as those of the other national races of Myanmar. In the throne room, there are miniature models of the eight kinds of thrones of ancient Myanmar kings and the magnificent Royal Lion Throne of Myanmar last monarch, King Thibaw. This great throne is used when the king deliberates with his ministers on state affairs or deliver judgments on important issues. The whole throne is heavily gilded. It is always placed in the "Hluttaw" Hall (Hall of the Council of Ministers). In the 19th century Yadanabon Period Exhibit hall exhibits clothing fashions, furniture and other household articles of the time. There is also a palanquin used by king Thibaw's Chief monk. 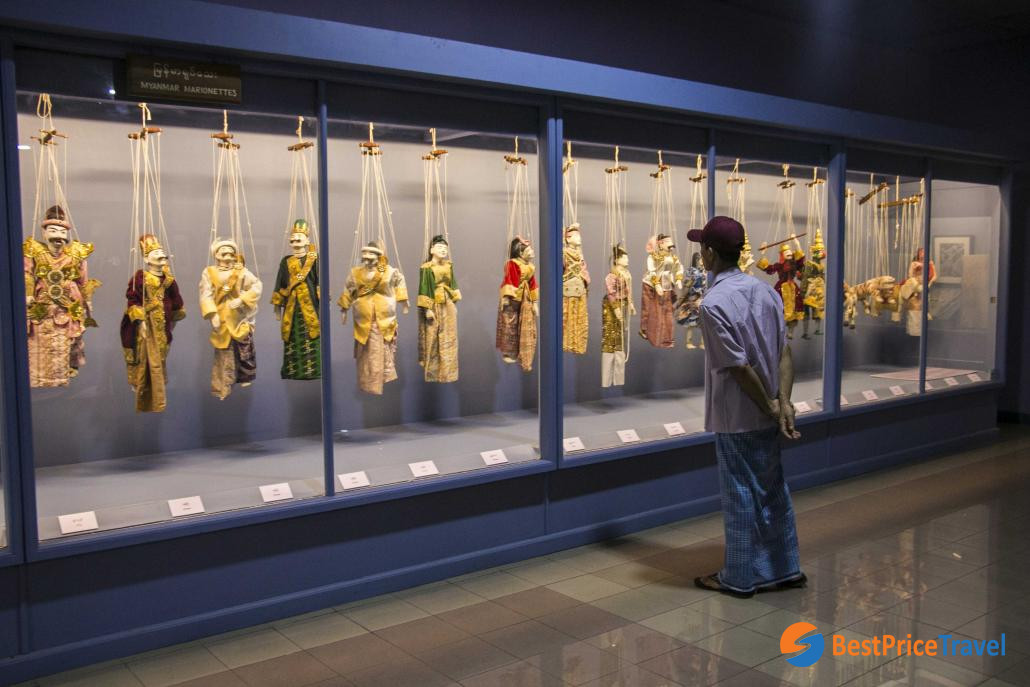 The puppet display at the National Museum in Yangon

The second floor of the museum is assigned for exhibition of Myanmar music, songs and dances. In the hall of music, songs and dances, visitors will see many musical instruments and the ornate "saing waing" or drum circle as well as marionettes made for dancing practice in classical dramas and operas. Also, there is exhibition of rural life in Myanmar that demonstrates the social economic and cultural traditions, means of transportation, changing overtime.

The third floor of the museum houses 3 exhibition halls: two for Myanmar paintings and the other for ancient ornaments and jewelry. In the Hall of Paintings, you can observe the progress of the Myanmar painting art culture. They started from the cave paintings of the Stone Age and down through the Bagan, Innwa, Amarapura, Konbaung and Ratanabon periods to 20th century contemporary art with some works of famous artists. In the third hall, visitors can take a look at the personal ornaments and jewelry worn by the Myanmar people since ancient times, especially an ornament for the ears of the 18th century A.D. called a "Nadaung" in Myanmar. This ancient piece of jewelry is a cylindrical plug which is worn by pushing it into the pierced ear lobe. 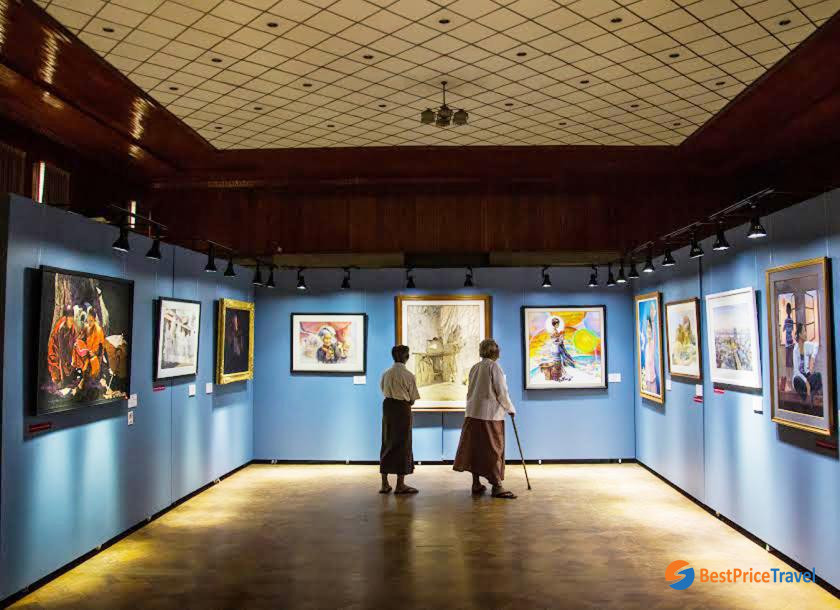 The art exhibition at the National Museum of Myanmar

On the fourth floor, there are halls for the Buddha Images exhibition and for the display of the culture of the ethnic races of Myanmar. The Buddha images include those which date back to the Pyu Period and up to the present day. In the Hall of ethnic culture, there is a colorful display of the national dresses of each ethnic race as well as various artifacts that they traditionally use.

The National Museum of Myanmar is located at No. 66/74, Pyay Road, Dagon Township, Yangon, near some other popular places that might be on your lists already such as the Shwedagon Pagoda, the Sein Gay Har Super Market, People's Square or People's Park.

These places are within a walking range about 10 to 20 minutes from the National Museum so tourists can either choose to walk or to take the taxis to travel from one place to another. The museum opens from 10am to 4pm every day except on Myanmar New Year Holidays (Thingyan Festival) in April. The entrance fee is currently 5000 kyats / person, which is about 3.27 USD.

Do I need to pay for the entrance ticket?

Other attractions in Yangon