Top 10 Ancient Temples in Cambodia [Should Not Miss]

Cambodia has a long and complex history when it pertains to religion. Although Cambodia is predominantly Buddhist, it has a long and storied history of Indian conflict. Subsequently, the country also has an observable Hinduism influence, evidenced in the artwork, architecture, and multitude of famous temples in Cambodia to visit.

In the 12th century, around the time the Angkor Wat temple was built, there was a sizable amount of turmoil between the Buddhist and Hindu believers. During this time, Cambodia experienced plenty of religious battles. The Angkor emperor desperately tried to bring peace to the land by building a temple, called Angkor Thom. This temple would house both the Hindus and the Buddhists and have both religious and cultural influences.

The King's idea was successful because today when visiting temples in Cambodia you can see the trend of Hindu and Buddhist designs and elements being displayed. It's remarkably interesting to see the two cultures blend so seamlessly, making the experience of Buddhism in Cambodia a unique and special experience. For instance, though Hinduism may not be widely practiced, Khmer Buddhists follow some Hindu practices in their wedding and funeral ceremonies.

Here are the top 10 ancient temples in Cambodia you can’t miss!

Angkor Wat is one of the most famous and oldest temples in Cambodia. It was built in the 12th century by King Suryavarman II and is one of the largest tourist attractions in Siem Reap. 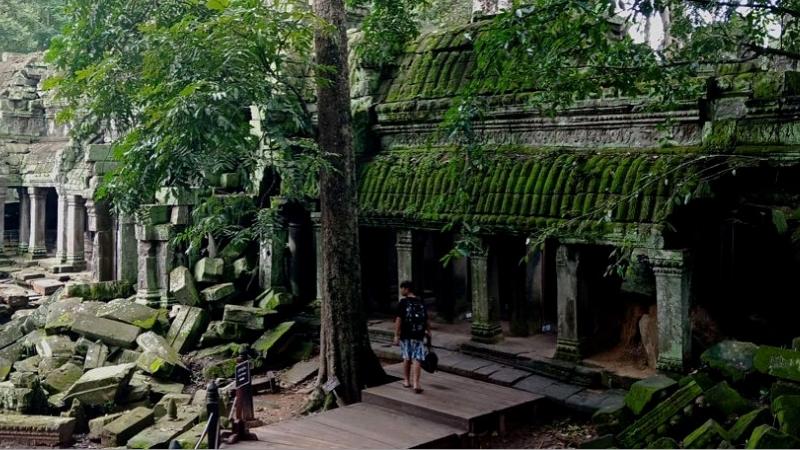 Angkor Wat is outfitted by a mysterious aura (Credit: @thelensesofourworld)

Angkor Wat’s beauty is not only found in its size but it is also found in its architectural beauty and intricate carvings which can be seen on the walls, each telling a story. The carved walls of the temple are remarkable storytellers of the creation of time, and battle.

The structure of the temple is large, it is one of the world’s largest religious structures and is separated into three tiers. There are 100s of stairs leading to each tier, but it is all worth the climb because the views are breathtaking.

We recommend you go to Angkor Wat either to see the sunrise or the sunset. The views of the aurora from the sun transform the temple into an alluring paradise. Angkor Wat at sunset or sunrise offers a mesmerizing view among top Cambodia beautiful places. The great appreciation of Angkor Wat is found in its timeless history and magnificent views. Being at Angkor Wat is significant when you consider that it has been a place of worship for thousands of years, and you are sharing that moment with the generations that came before you. It is a truly humbling experience.

If you are craving a deep exploration of Angkor Wat, let's get the Best Cambodia Angkor Wat Discovery Tours 2022 at BestPrice Travel.

Thought to be the most impressive historic site, Banteay Srei, a Cambodian Hindu temple, lies only 20 kilometers from Angkor Thom. Banteay Srei Temple is an ancient monument, also known as ‘the woman’s Citadel,’ and is one of Cambodia's most impressive sanctuaries.

In contrast to Angkor Wat, Banteay Srei is considered to be one of the smallest temples in Cambodia. But is equally loved by travelers because of its charm, impressive carvings, and unique decorations. 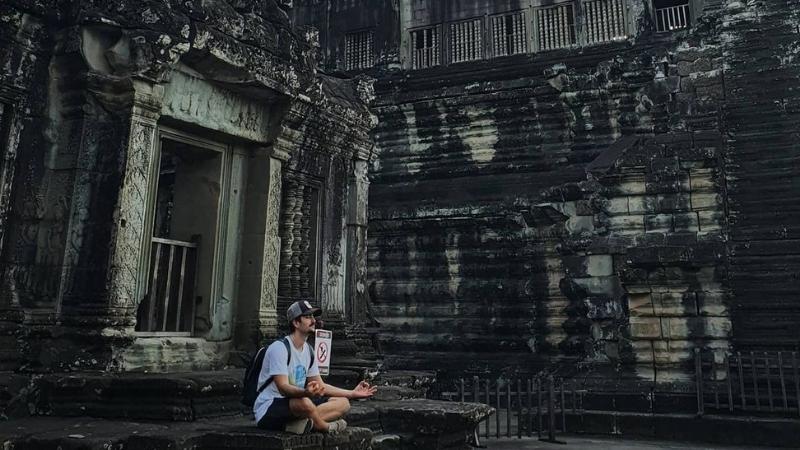 Tourists show their interest in the imposing architecture of Banteay Srei (Credit: @rubenlozanovara)

Though the temple once stood forgotten in the jungle, it was rediscovered in 1914 and brought back to life. The architecture and carvings on the building are inspired by the Khmer era and tell a story of Krishna Shiva and Vishnu legends. The temple is adorned with goddesses, Shiva, and Vishnu carvings.

Banteay Srei is a definite must-see for travelers who want to admire the rich culture of the Khmer people and marvel at the beauty of a sanctuary that is thousands of years old.

Built during the reign of King Jayavarman the 7th, in the 12th century, Neak Pean Temple is a unique temple in Cambodia because it sits in the center of a reservoir located only 10 kilometers from the Angkor Wat temple. Based on the Hindu belief of Balan, this distinctive temple of Neak Pean was built for healing purposes, people believed that the pool of water had healing powers to remove any bad spirits that were causing illness. 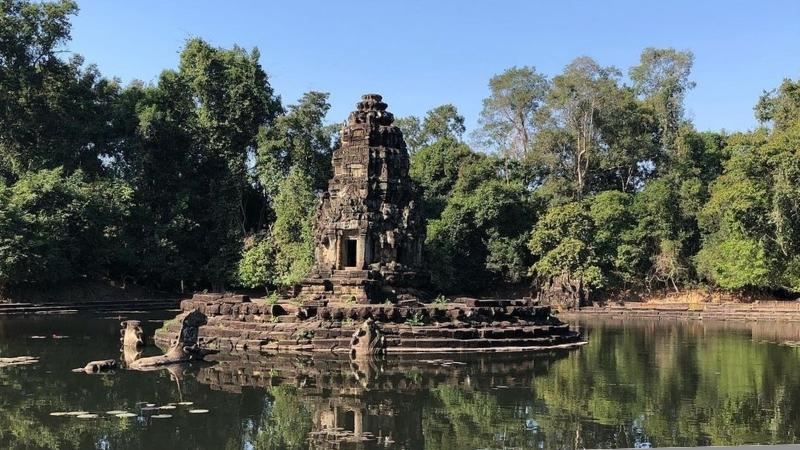 Banteay Kdei Temple is a Buddhist temple located in the Angkor Archaeological Park. Built by King Jayavarman VII in the 12th century. Banteay Kdei is a must-see if you are looking to take beautiful pictures without having to worry about it being overpopulated with tourists. It is a definite must-see, as it has been ruined with overgrown trees and plants and a peaceful charm. It is a great temple to enjoy a sunset without the bustle of too many tourists. Banteay Kdei Temple is a hidden gem, one which we believe should be on your list of top temples to visit in Cambodia. 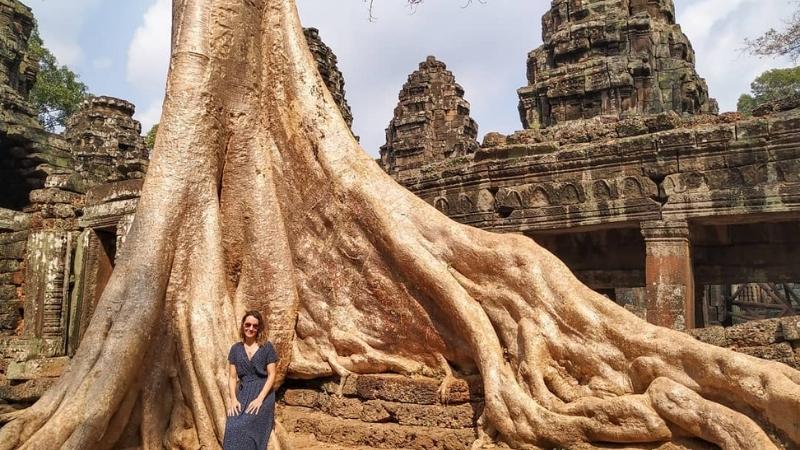 Originally named Raja Vihara, Ta Prohm is unequaled to Angkor Wat temple, but it is unrivaled on a natural scale. After the collapse of the Khmer society, people abandoned the temple, and as a result, it became amalgamated with nature, almost becoming one with the jungle.

Popularly known as the jungle temple today, Ta Prohm is truly an amazing wonder to see. Travelers can come to appreciate how the temple was able to withstand generations of being abandoned and beautifully merge with nature. It truly is a wonderful site and one we highly recommend you see. 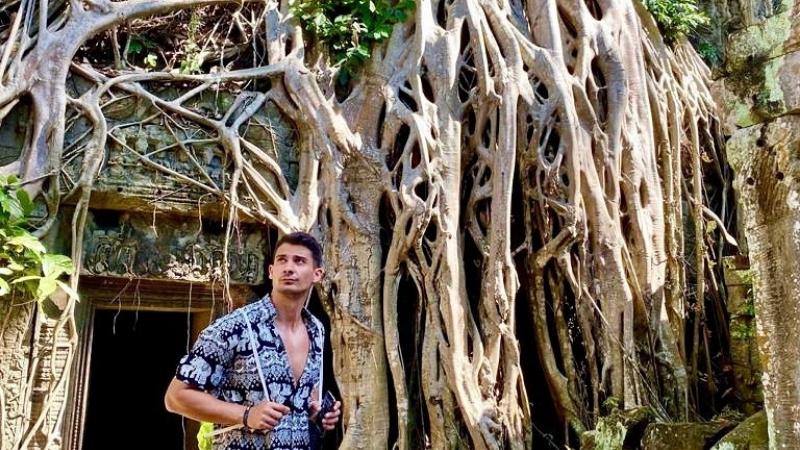 Many tourists are thrilled before the beauty of Ta Prohm (Credit: @jotade Trece)

The design of the Bayon Temple Cambodia was constructed to represent the center of the universe in Buddhist and Hindu mythology, known as Mount Meru. This is evidenced by the location of the temple, which is found in the heart of Angkor Thom. 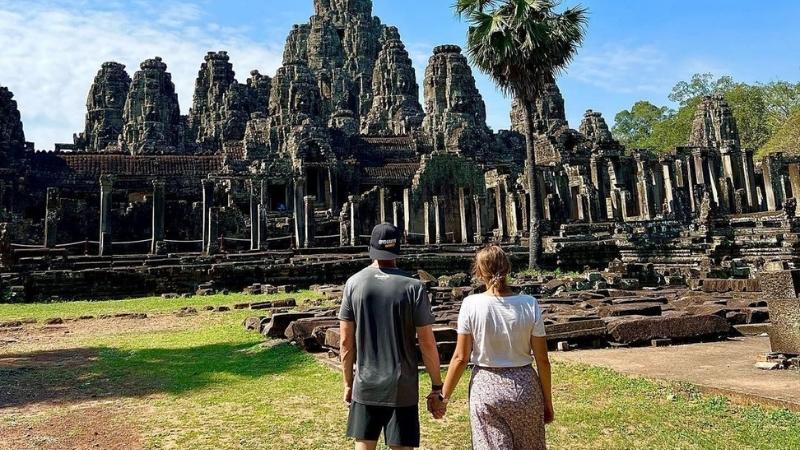 Admirers of the temple boast of its archaeological geniuses and artistry. The temple is adorned with statues of faces, earning its name as the temple of faces.

The temple has a seamless mix of both Hindu and Buddhist influences in the carvings and artwork. This merger of Hinduism and Buddhism is unique to Cambodia. It is a sight to marvel at when considering the history of religious battles Cambodia faced.

Today we see one of the many reasons king Jayavarman VII is widely celebrated in Cambodia, especially when you visit temples such as Bayon, and enjoy the architecture and merge of two religions and cultures being celebrated equally.

Built in the 12th century during the reign of Suryavarman II and Yashovarman II, Banteay Samre is unique because it is one of the few temples that were not built by a King. 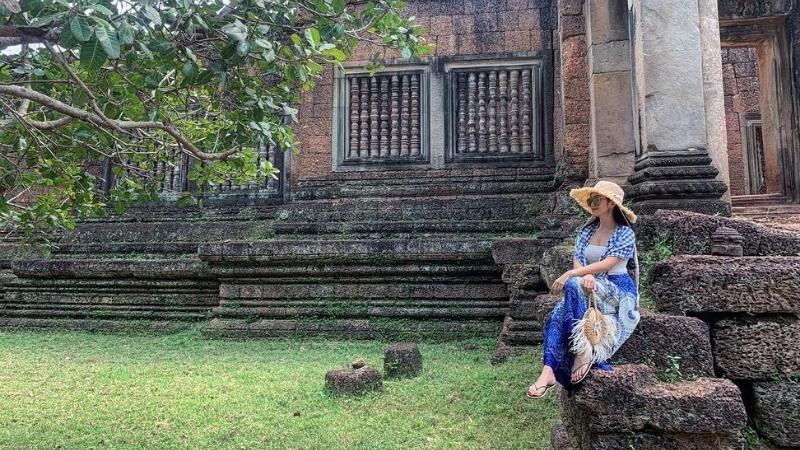 The temple has seen many changes and reconstructions during its life. It can be said the beauty of these changes is that travelers can experience how this temple represents both Buddhist and Hindu influences in its designs and decorations. This temple is a definite must-see if you want to enjoy the history of the temple and appreciate how two religions, which had been the point of contention throughout Cambodian history, now sit as a beautiful blend of two beliefs coming together in one temple.

For every fan of history, let’s figure out the 8 Best Historical Places in Cambodia

Set on the only hill in Phnom Penh - one of the best cities to visit in Cambodia, Wat Phnom Temple makes for one of the oldest temples in Cambodia. Legend has it that a woman named Penh found a floating tree in the river. When Penh opened the tree trunk, she found four statues of Buddha. The four statues of Buddha were then placed on a hill which later would receive the name Phnom Duon Penh. 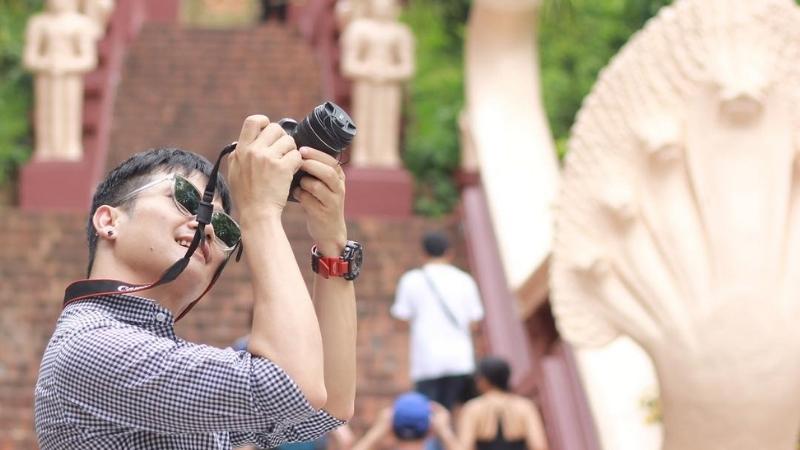 This temple plays a significant role in the lives of the Cambodian people as many visit the temple to make prayers and wishes. It is also the place for new year's celebrations used to celebrate the Khmer New Year.

If you are looking for an adventure, we would highly recommend that you check a temple that is off the beaten track, like Prasart Phnom Ngok. Located 8 kilometers from Kampot, Prasart Phnom Ngok is another Cambodian Hindu temple to see. Visiting the cave temple would be one of the best things to do in Cambodia for a lifetime experience. 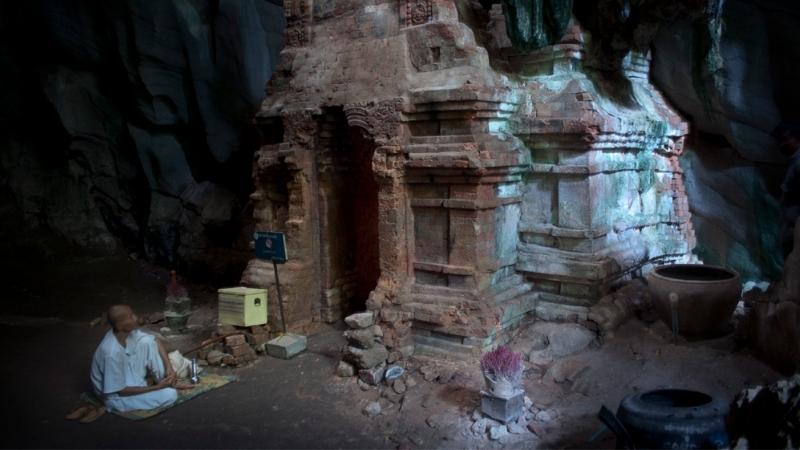 What makes the cave temple worth the visit, are the picturesque countryside views that can be enjoyed on your drive to the caves. The temple is a unique experience because it is preserved in a cave, keeping it in pristine shape. The temple was constructed in dedication to Shiva in the 7th century and is considered the oldest temple in Cambodia.

Much of the beauty of Cambodia comes from the beauty in temples and their beautiful architecture, one of which is the Preah Temple. 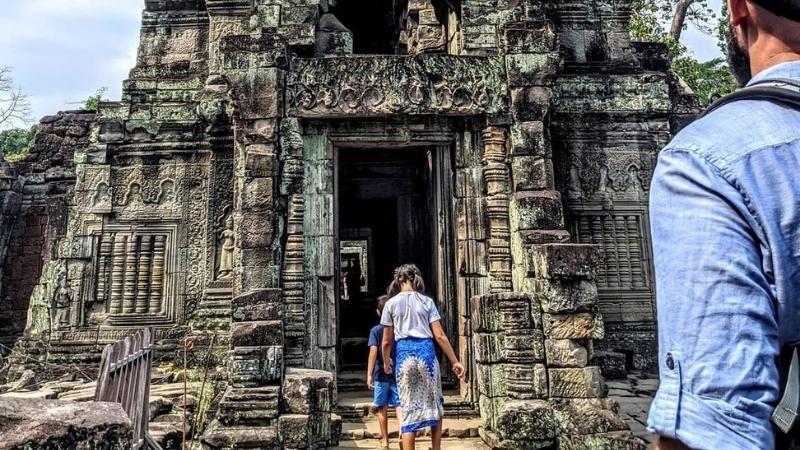 Parents choose Preah Khan for the trip with their kids (Credit: @redventures)

The Preah Temple is an ancient Hindu temple that was built during the Khmer era in dedication to the Hindu god Shiva. Built in the 11th and 12th centuries, this temple was one of the most sacred homes for the Khmer Empire. It lies just a few kilometers from the Thai border and has been kept in good condition. These ancient ruins are a definite must-see.

Beyond the Angkor temples, BestPrice Travel is here to help you explore all the best temples in Cambodia. Be sure to check the rates and availability of Cambodia Tours and Holiday Packages out on bestprıcetravel.com for more information. 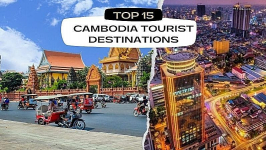 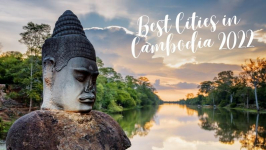 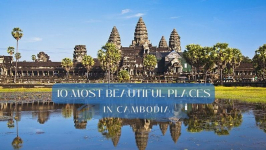