It is no coincidence that Thailand is well known as the land of the Golden Pagodas. Among the various temples in the capital city of Thailand, one of the most elegant sites voted by tourists is Wat Arun - the Temple of Dawn.

Scattering throughout the country are countless of large and small temples with different historical backgrounds. At a glance, there are more than 100 temples with unique architectural features associated with historical events as well as religious and spiritual significance throught Bangkok. Among the various temples in the capital city of Thailand, one of the most elegant sites voted by tourists is Wat Arun - the Temple of Dawn.

Wat Arun is located on the west bank of the famous Chao Phraya River of Thailand. This is considered the most ancient and magnificent temple of Bangkok. Every morning, Wat Arun is the first place in the city of Bangkok to receive the light of the rising sun from the east of the Phraya River, so it is named Pagoda of the Dawn. 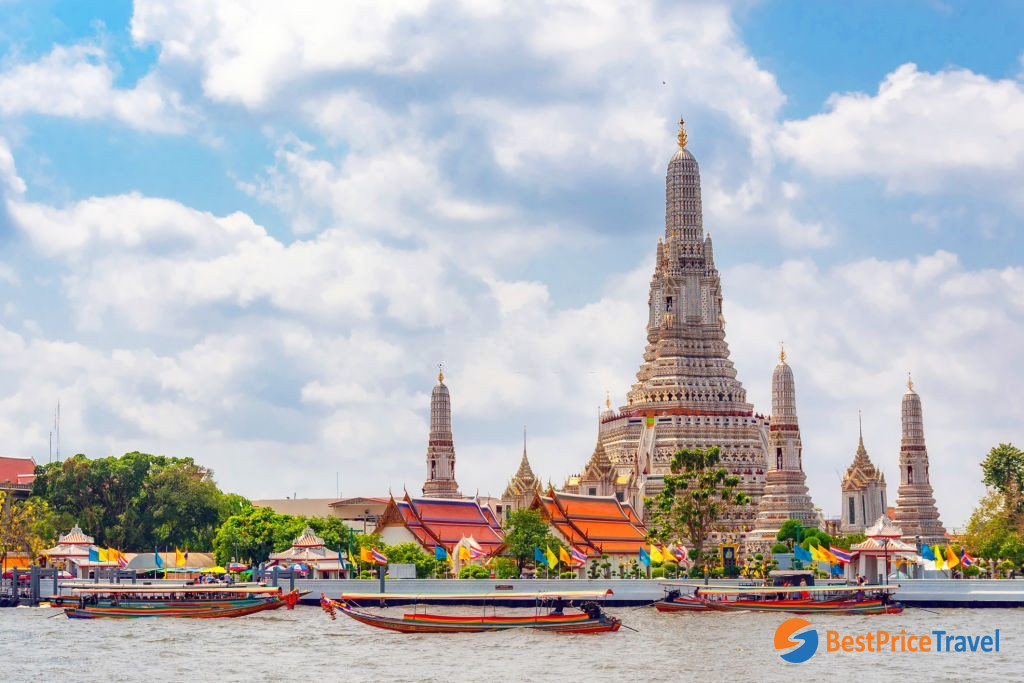 Wat Arun on the edge of Chao Phraya River

Wat Arun has 4 corners with 4 pointed towers, symbolizing Mount Meru, the center of the worldview according to Buddhism. According to legend, Mount Meru is the sacred five-peaked mountain in the cosmology of Hinduism and Buddhism, considered the center of all material, metaphysical, spiritual and axial universes of the world. So the 4 towers in the imagination of the ancients are images representing the guardian deities in 4 directions. The temple's architecture is extremely meticulous and sophisticated to every detail. Each piece of porcelain, each inch of glass covering the towers of the temple is inlaid with gentle colors, creating great effects whenever illuminated under the lights.

The Temple of Dawn is also the place where the remains of King Rama II are buried. On the wall of the temple are paintings depicting the life of Prince Siddhartha, also known as Buddha Shakyamuni. Thanks to its unique architectural design, the highest tower of Wat Arun on the banks of the Chao Phraya River is considered a famous landmark of Bangkok. The 70m high Tower, decorated with Chinese porcelain and glass, is set up in an elegant and sophisticated way, promising tourists with the best memorable photos. 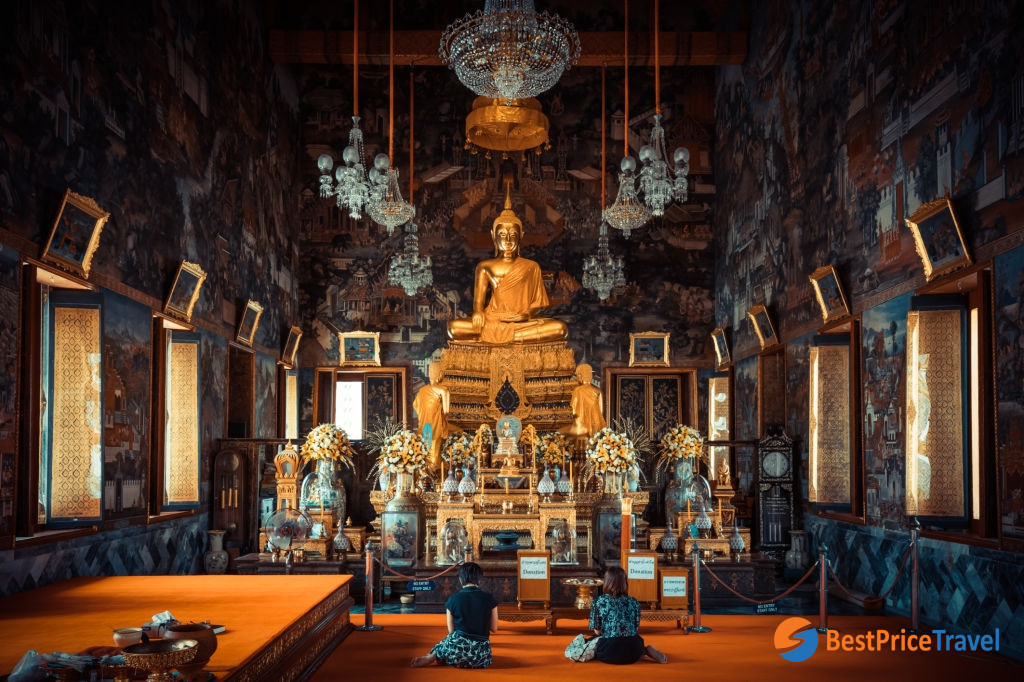 Constructed in the 17th century, Wat Arun is known for its unique architecture, quite distinctive and not in conflict with any other temples in Bangkok in particular or Thailand in general. After setting feet on the temple grounds, tourists will be wowed by the beauty of the temple built completely out of bricks and covered with colorful ceramics on the outside. Standing at the highest point of the temple, tourists can overlook the beautiful Chao Phraya River (also known as "Venice of the East"), the magnificent Royal Palace and the sacred Wat Pho temple. 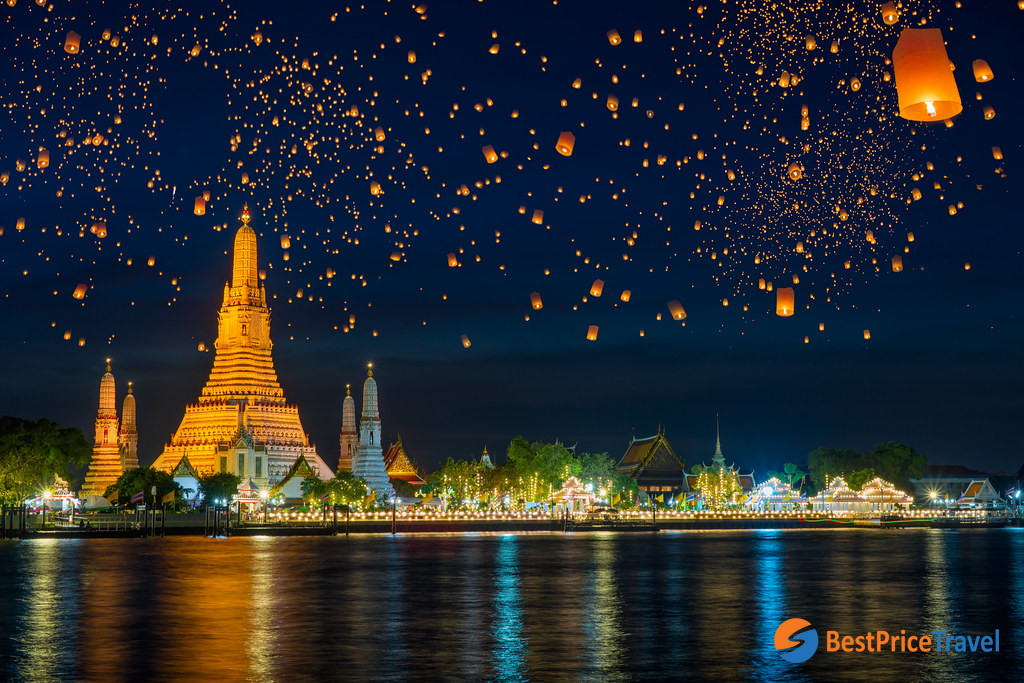 The Temple of Dawn

Wat Arun is named Pagoda of the Dawn because the best time to visit the temple is early in the morning. When the sun starts to rise, find your self a high spot on Wat Arun and admire the sunrise covering the temple roofs with a sparkling, dreamy and gentle yellow shade. Don’t forget to grab your camera and capture the best shots of the temple and yourself for Facebook and Instagram check-ins! This is also the best time to sit back, forget about your busy daily life, find your inner peace and enjoy these precious moments of your trip to the beautiful country of Thailand. 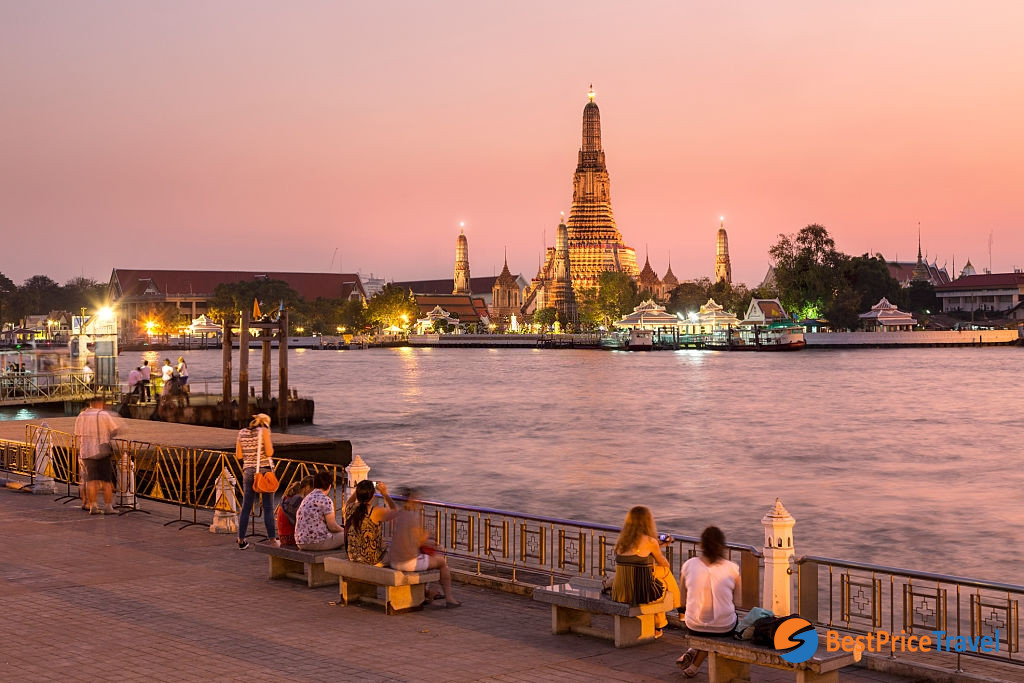 The temple is a sacred spiritual place, so visitors should pay attention to appropriate costumes. From Sapphan Taksin pier, tourists can take a boat on the river to pier 8. From here, a small boat will take you to the other side of the river for only 3 baht. The entrance fee is 100 baht and the temple is open from 08:30 to 17:30. The best time to visit Wat Arun is at sunset or in the evening when that lights are up.