Located at the heart of the remarkable kingdom - Cambodia's capital, Phnom Penh with the whole complex covers an area of 400,000 square meters. The Royal Palace has a main gate on Sothearos street and a view towards Chaktomuk river, one of the Mekong branches.

This is the splendid architectural achievements, compound with Wat Preah Keo Morakat familiar to visitors known as "Silver Pagoda", forming a unique symbol of the Cambodia Kingdom.

At the time of Angkor's prosperity (802 - 1431), the capital of this empire was located in the North Tonlé Sap Lake (Siem Reap province at the present). But this position was too close to the Ayutthaya border as well as the constant wars forced King Borommaracha II (1393 - 1463) to move the Angkorian capital to the area of Phnom Penh. Through many other events, the capital was transferred to other places such as Basan, Lovek and then Oudong.

When the French colonialists invaded Cambodia and forced King Norodom I (1834 - 1904) to sign the Treaty of Protection in 1863, a temporary palace was built for this event at nearby the current Palace site in Phnom Penh. And the first Royal Palace of Cambodia is fully called Preah Barom Reachea Vaeng Chaktomuck, built in 1866 after the King moved the capital from Oudong to Phnom Penh in the mid-1800s and gradually completed in the mid-20th century. Since then, Phnom Penh is officially Cambodia's capital until now. 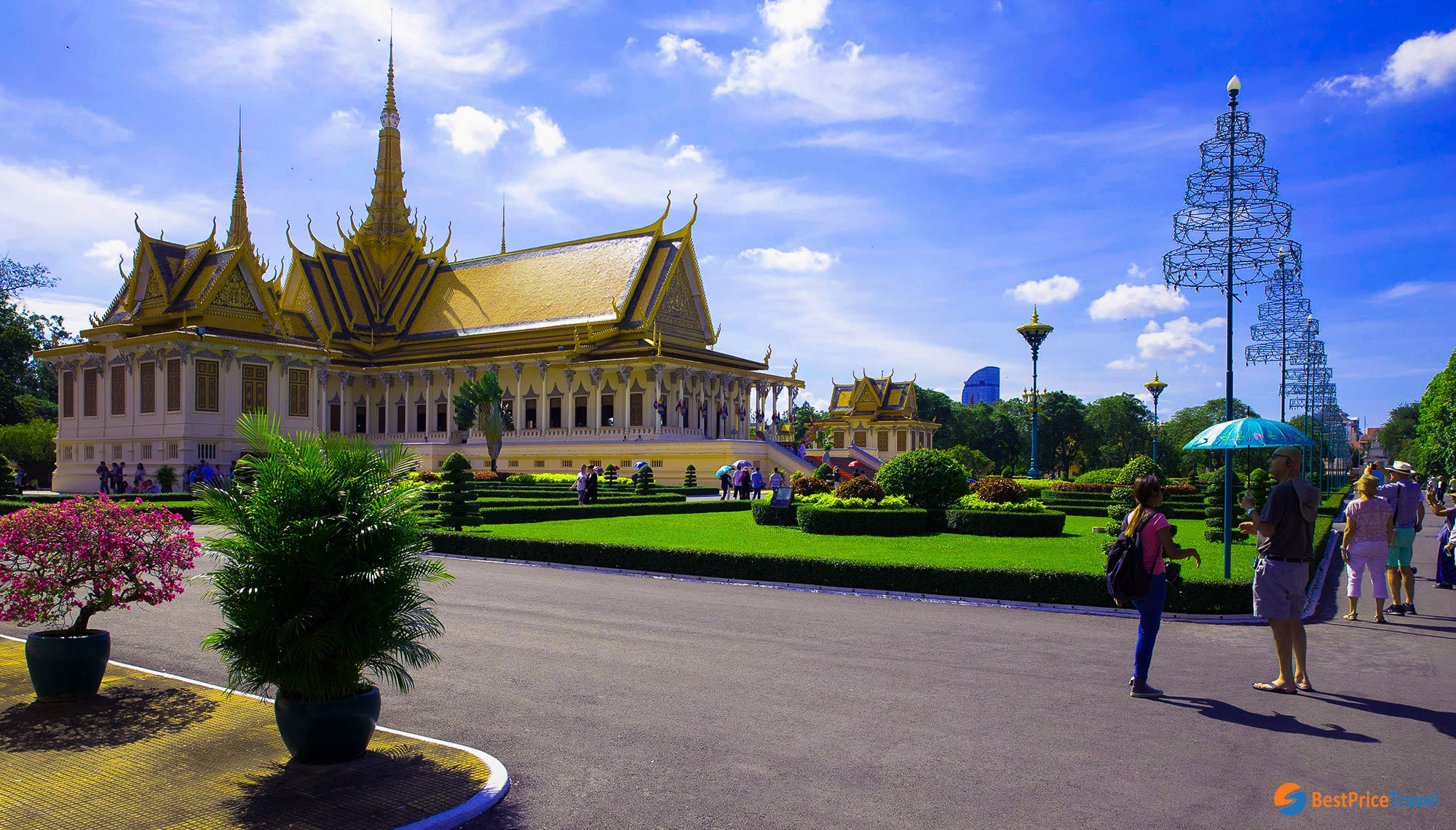 Under the patronage of France, the palace designed by the architect Neak Okhna Tepnimith Mak base on the traditional Cambodia motifs. The palace has been a home of all the Cambodian kings except for a period of interruption when the country was under Khmer Rouge's domination. Not only the accomodation and living of monarche and royal family, but also the place holding imperial courts and royal rituals, diplomatic etiquettes or welcome foreign statesman...

With its classic golden Khmer gables, Throne Hall is the typical building in the whole palace. Known as the Preah Tineang Tevea Vinnichay Mohai Moha Prasat, it means the Sacred Seat of Judgement. This wooden room was built in the years 1869 - 1870 and then detroyed in 1915. Two years later, the hall was rebuilt with solid materials in an area of 180 square meters, with a height of 59 meters. 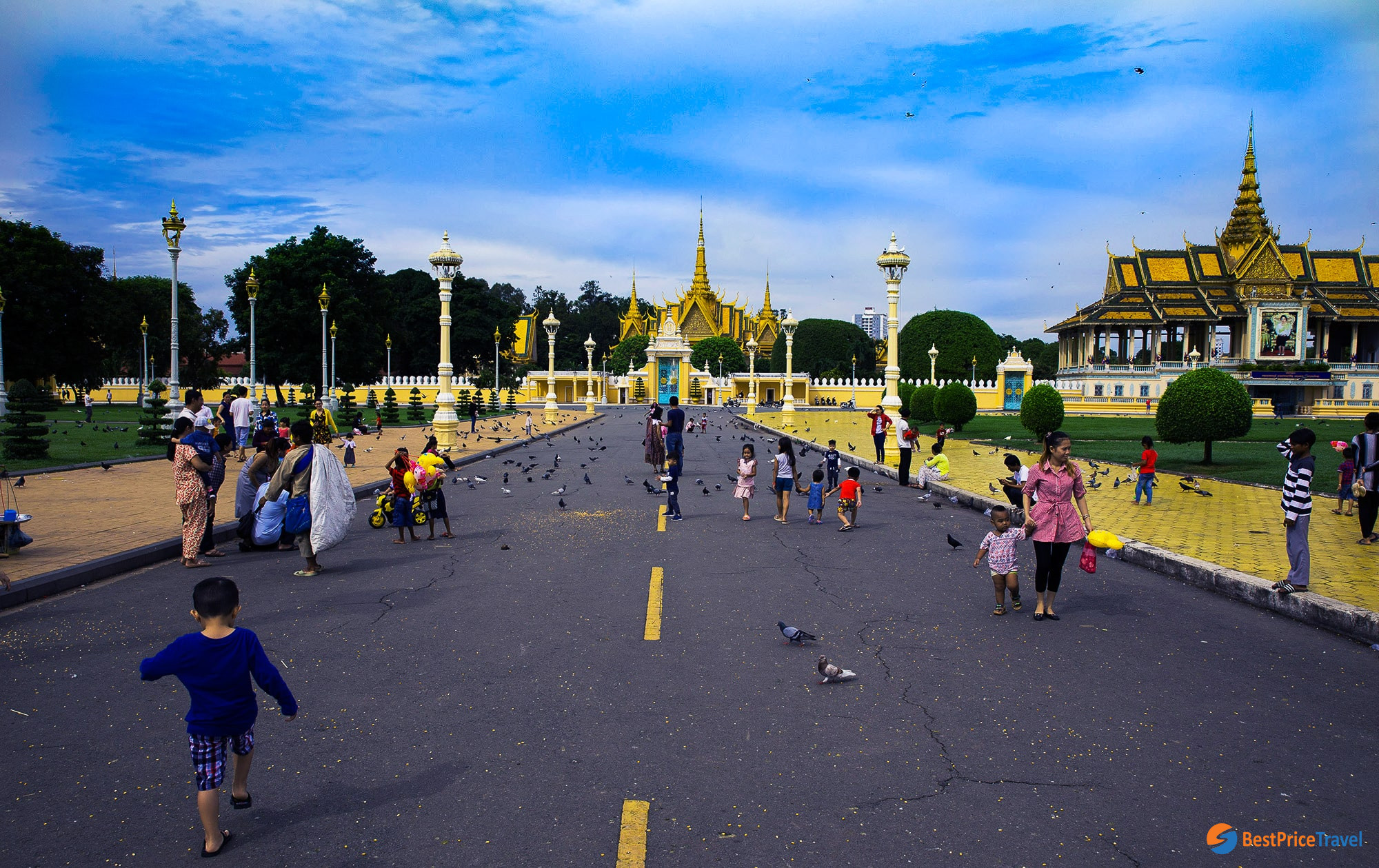 Square in front of Royal Palace

The eminent highligh is the ceiling with domed structure, decorated with a unique painting describing Reamker legend with brilliant patterns. The hall was used for holding courts and diplomatic and other official meetings. At the present, this is a place for the royal and religious ceremonies such as coronation, royal marriage,...

Beside the Throne Hall, there are several buildings that open to public include the Chanchhaya Pavilion, also known as the "Moonlight Pavilion", the Hor Samran Phirun - "the Pavilion where on sleeps peacefully" or the "Silver Pagoda" sits next to the Royal Palace, a Buddhism popular destination.