Cat Ba island has a number of caves from small and large, and prominent among them are Quan Y (historic Hospital Cave), Trung Trang, Dong Hoa Cuong, and Thien Long caves. Hoa Cuong cave is one of the most amazing caves on this island which is still untouched and uncorrupted wealth of nature.

Located 20 km from Cat Ba town and a few minutes of driving from Gia Luan harbor, Hoa Cuong Cave is a particular favorite for both domestic and foreign on Cat Ba island because of the pristine beauty of the area, the legends surrounding, and its fascinating history. The cave name means Diamond Cave in English as it is famous for many natural stalactites and stalagmites sparkling like a diamond. Hoa Cuong Cave nestles deep in a forest-covered mountain, so still retains its pristine appearance. 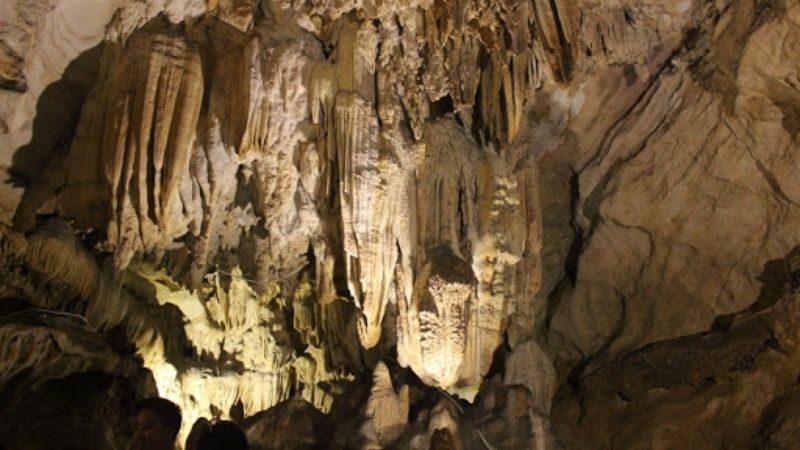 Natural stalactites and stalagmite is not only sparkling like a diamond but also become soulful with legendary stories imagined by Gia Luan people, passed down from generation to generation.  Gia Luann people believe that due to the idyllic climate and the charming scenery here, the King of Heaven took the princes and princesses to spend time together in the cave.  When entering the cave, tourists will see a magical scene like a palace in a fairyland. In front of the palace door, there are two mighty lions to protect the Princess. There is a stalactite curtain separating the boudoir of one of the princesses. The princess rocked her baby to sleep on a magnificent bed of stalactites. Next to the Princess bed was a beautiful little fairy’s bed, hidden deep inside. Fanciful light makes the space inside more magical and sparkling. Going deep inside, tourists can see the stone statue of two Buddhas.

As you explore further into the cave you come across a luminous cool lake, the water so clear that you can see the white pebbles at the bottom. Another legend says that the girls in Gia Luan commune who took bathing in this lake would have the skin as white and smooth as a baby. Not far from the lake is the rock which looks like a boat, and people believe this boat belonged to a Prince. The image of the boat makes the cave more romantic and the reflections on the stalactites and stalagmites on the lake appear to be like flowers blooming, creating a sense of magic for the cave. 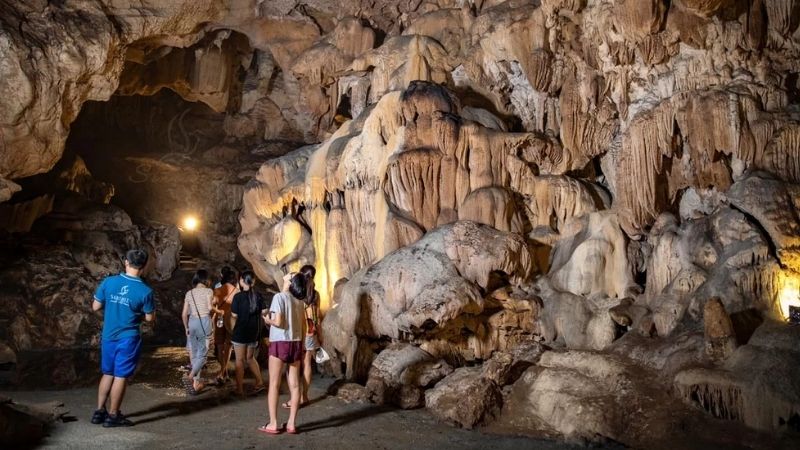 This cave is around 100 meters long and about 10-meter high. The tallest high of the cave is 25 meters, and the largest width is 25 meters. It stands at 15-20 m from the resident surface or 50 m  from sea level. The cave is hidden by trees and bushes, and you need to go through a large arched entrance to reach the cave. There are many stalactites created in a variety of shapes by Mother Nature, many taking on the appearance of humans and animals. Inside the cave, tourists can see a small lake where the light reflects splendidly making a fanciful sight. The stalactites assume shapes of statues of humans and animals are creating a backdrop like pictures of mythology.