Once a year, on the 15th day of the eighth month on the lunar calendar, the Mid-Autumn Festival, also known as the Moon Festival, is celebrated all over Vietnam. It is the most exciting time to learn about the beautiful traditions and customs in Vietnam. 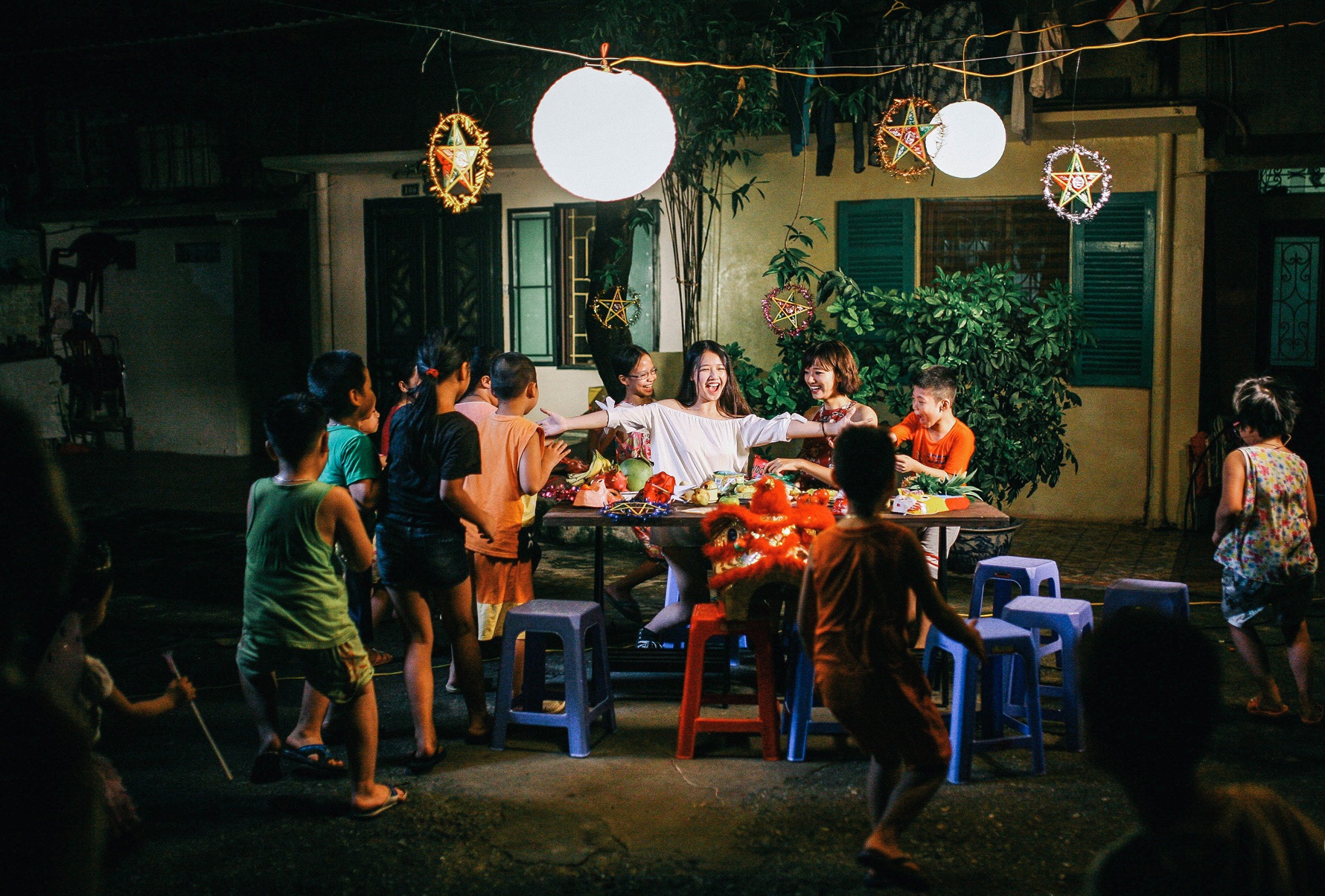 In Vietnam, Mid-Autumn Festival is a traditional celebration for children

1. Worshiping the God of Earth

Usually, a worshiping platform is set up in the yard during the night of the Mid-Autumn Festival, on which mooncakes, fruit, and snacks are laid. Later, family members sit together to eat the food while appreciating the moon. 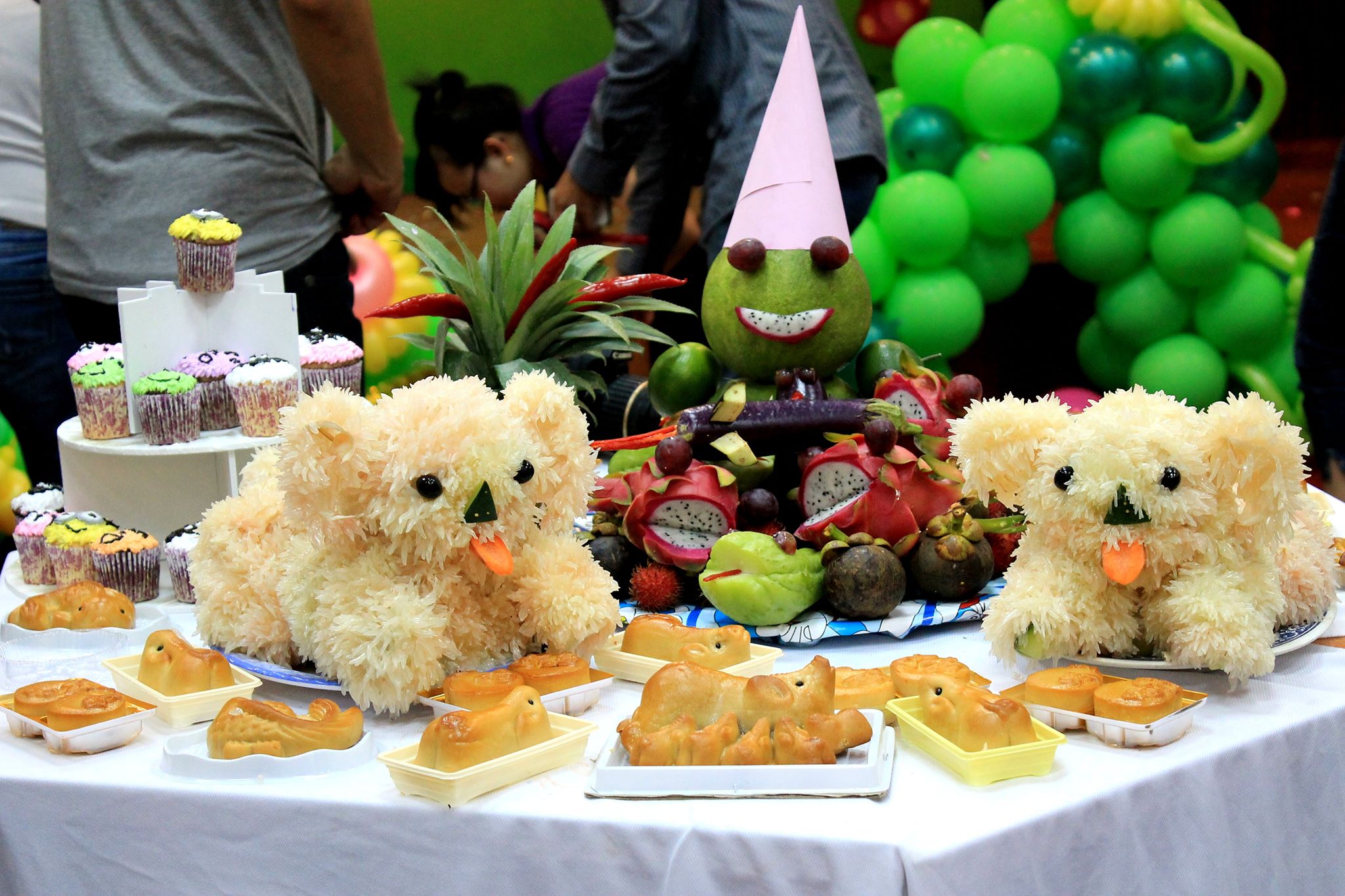 The Feast for Mid-Autumn Festival

The platform is not taken down until midnight when the food has been completely eaten. Most families also set up a special platform for children, so that they can enjoy food at any time during the evening.

In traditional beliefs, the full moon is the symbol of a family reunion. When people look at the moon, it reminds them of their families and homeland.

Nowadays, it is rare to see families worshiping the moon in big cities. But people still like appreciating the moon during the Mid-Autumn Festival. After dinner in the evening of the Mid-Autumn Festival, family members enjoy mooncake with tea and watch the moon. People often choose an outdoor area with a good view of the moon, like a balcony, a courtyard, or a lakeshore. 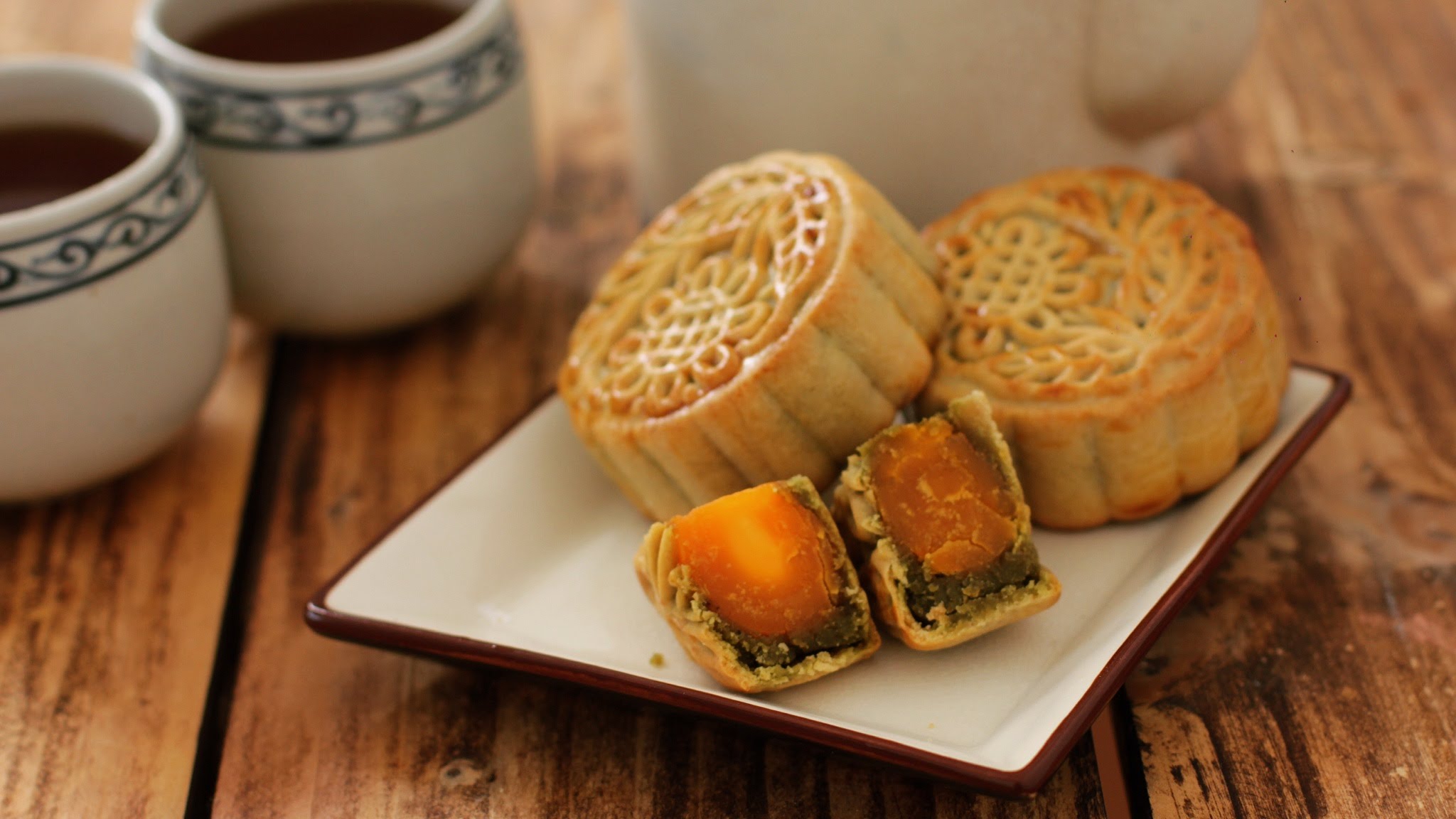 A mooncake is a traditional pastry. It is a symbol of a family reunion, and the cake is traditionally cut into pieces that equal the number of people in the family.
Traditionally, mooncakes are infused with embedded egg yolk to represent the moon and lotus seed paste. But nowadays, you can find an exciting jumble of creative fillings. Eating mooncakes is the most common and representative tradition of the day. In ordinary times, people do not buy or eat mooncakes but during the Mid-Autumn Festival, everyone has mooncakes at home or even in their office to celebrate. 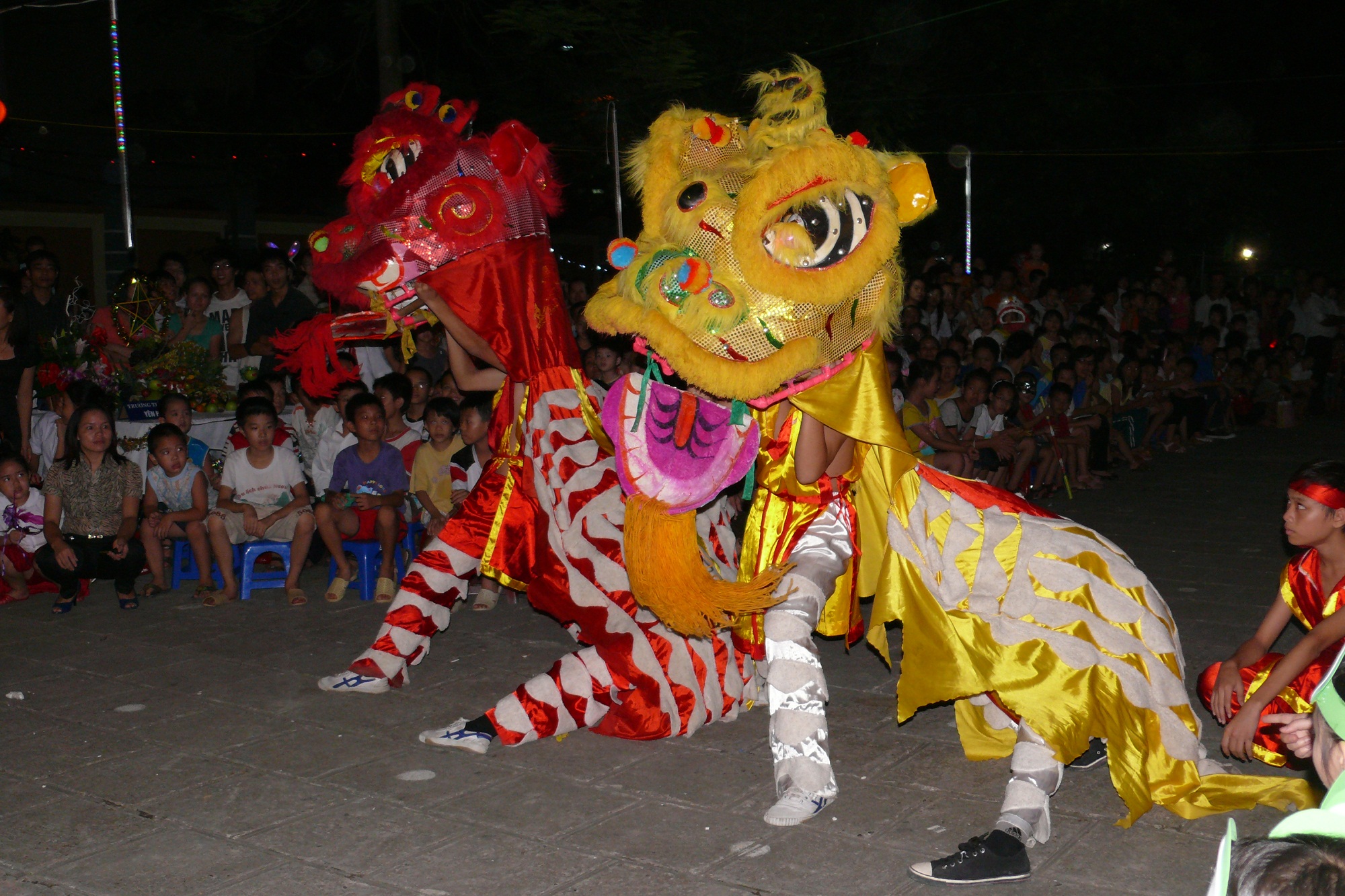 Lion Dance on the street

At night, groups of children parade through the streets, go from door to door, and ask house owners for their permission to perform the lion dance. If it is agreed then the children will put on a show, which is believed to bring luck and fortune. Afterward, the owners will give the children 'lucky' money for their gratitude.

These lion dances are fascinating, and huge amounts of children, ranging from little kids to teenagers, participate in this activity. As a result of having so many groups of children marching around, the streets of the cities echo with the sound of drums, as dozens of lions roam. 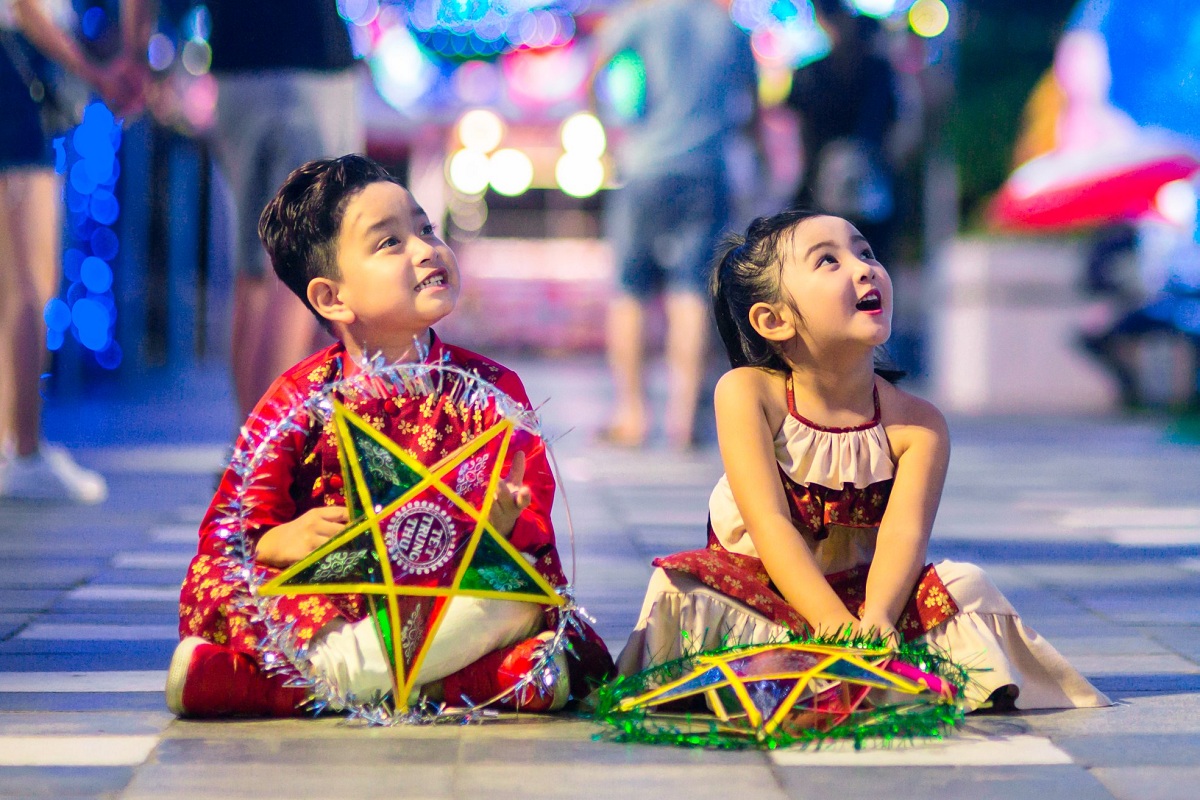 Children happy with their lanterns

Later, a wise man thought of an idea: he made a carp-shaped lantern with a stick in its belly, and then advised people to walk at night holding a carp-shaped lantern. The carp spirit was terrified by the light from these lanterns and has not dared to go out to kill anyone during the Mid-Autumn Festival since then.

Nowadays, children hold various kinds of paper lanterns and play in the moonlight, while eating mooncakes during the Mid-Autumn night.

All in all, the importance of the Mid-Autumn Festival and its legendary characters is a pervading Vietnamese tradition. 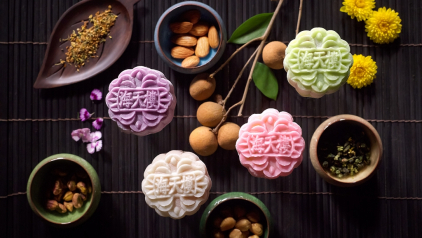 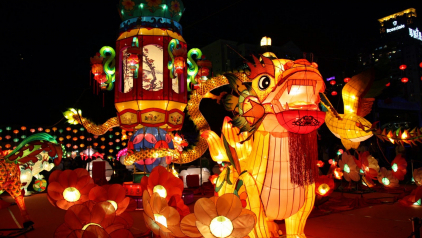